Crimean War, as the beginning of the collapse of the empire

This war Russian empire lost, although from the time of Peter I its army was considered the most powerful force on the planet, Russian troops smashed the Swedes, Turks, Persians, Poles, Prussians, French. That defeat became more unexpected and shameful.

This war actually became the forerunner of the World War, since a whole coalition of the leading powers of the planet — the British Empire, France, the Ottoman Empire and Sardinia (the strongest part of fragmented Italy) came out against Russia. But England and France were then the leading powers of the planet in technical and political terms. In addition, the Union was supported diplomatically and the great land powers - Austria and Prussia.

Much to blame in this situation and the monarchs Alexander I and Nicholas I. Alexander got involved in the anti-Napoleonic unions, unnecessary to the Russian Empire, although Pavel I interrupted the vicious practice of fighting for the interests of others (for which he was killed). As a result, Russia suffered a series of heavy defeats, had to repel the invasion of the "Great Army", then fight in the name of British interests in Europe. 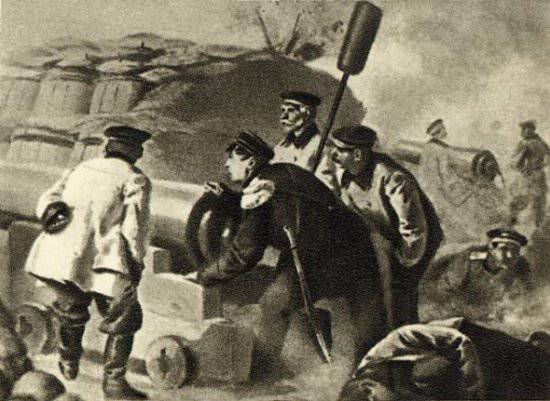 Then, after the creation of the “Holy Union”, to support by force weapons the existence of monarchies. So, in 1849 Russia saved Austria from the Hungarian uprising - the Hungarian campaign of Paskevich and Ridiger. In the end - the “Russian gendarme” was hated by the whole “enlightened” Europe. These actions did not meet the fundamental interests of the empire and the Russian people — they had to move to the South, to Central Asia, to the Persian Gulf, India, and Northern China. To develop our industry, agriculture, science and education, and not to waste resources in European wars and conflicts that we do not need.

London was then the main enemy of Russia, in this respect the words of Lord Palmerston are very revealing. Even during the negotiations on the confiscation of the Uyksen ship (an English ship that supplied arms and gunpowder to the Caucasian rebels who fought against Russia, was arrested by the Russian fleet) between Palmerston and the Russian ambassador in London, Pozzo di Borgo, a turbulent scene occurred on April 30, 1837, during which Palmerston lost his temper so much that he expressed in the most frank manner why he was so picky and hostile towards Russia: “Yes Europe has been sleeping too long. She finally awakens to put an end to this system of conquests, which the emperor wishes to undertake on all the borders of his vast empire. In Poland, he strengthens and threatens Prussia and Austria; he withdrew troops from the (Danube) principalities and sows trouble there to get an excuse to return there. He is building large fortresses in Finland to intimidate Sweden. In Persia, your messenger incites the Shah to meaningless expeditions that ruin him, and he himself invites him to personally participate in these devastating wars in order to weaken and destroy him. Now you want to appropriate Circassia ... "

Pozzo di Borgo, after hearing these speeches that were extraordinarily frankly rude, said that it was strange for him (Palmerston) to be so worried about the fate of Prussia and Austria, "the powers that live in harmony and the most sincere friendship with Russia." “You are right in this,” Palmerston interrupted, “they (Austria and Prussia) are mistaken. But England should play the role of a defender of the independence of nations, and if the sheep are silent, the shepherd is obliged to speak for them. ”

England was perfectly able to take advantage of the dispute between Russia and France that began in 1852 for the "right to the patronage of the Christian shrines of Palestine." Palmerston was able to incite Russia and France and the Ottoman Empire. In addition, Napoleon III was personally offended - Nikolai doubted his right to take the throne. The French emperor decided to restore the prestige and majesty of France, and to gain prestige in the war with Russia - proclaiming the need for the French to "wash the shame of 1812 of the year."

Palmerston outlined the goals of the war:

- Aland Islands and Finland are returning to Sweden;

- The Baltic region departs to Prussia;

- the Kingdom of Poland should be restored as a barrier between Russia and Germany (not Prussia, namely Germany, Palmerston said behind the scenes). Moreover, the Polish patriots did not seek the independence of the Polish Kingdom that existed within the Russian Empire. The Poles demanded independence of the Polish-Lithuanian Commonwealth within the borders of 1772 of the year, that is, with Lithuania, Belarus, the southern half of Latvia (on the Western Dvina), along with Riga, and the western half (along the Dnieper) of Ukraine, together with Kiev. And the most radical ones intended to this state, which had come to life in their dreams, to annex Finland as well;

- Moldavia and Wallachia and the entire mouth of the Danube departs from Austria;

- Lombardy and Venice from Austria to the Sardinian kingdom;

- It envisaged the rejection of Crimea, Georgia, the south-eastern part of the Caucasus from Russia and the creation of a “Circassian state” headed by Shamil, who was in vassal relations with the Turkish sultan.

In 1854, the London Times wrote: “It would be good to return Russia to the cultivation of internal lands, to drive the Muscovites into the depths of forests and steppes.” In the same year, D.Rassel, leader of the House of Commons and head of the Liberal Party, said: “We need to snatch the fangs of a bear ... Until his fleet and naval arsenal on the Black Sea is destroyed, Constantinople will not be safe, there will be no peace in Europe.”

But All these plans of the English-French-Turkish coalition have broken about the Russian Soldier and Officer, the Russians dropped the British landing forces in the sea on Kamchatka, stood to death in Sevastopol. After long and stubborn fights (only Russians can fight now, then the French and the British were others - they knew how to fight) and the allies achieved very modest successes. Taking completely destroyed Sevastopol, they stopped - what to do? To invade deep into Russia ?! Foolishly, the Russian spaces will swallow them up and not notice them.

There were disagreements: London supported the continuation of the war, Paris did not. This is understandable, the French bore the brunt of the fighting in Sevastopol (three-quarters of the forces were theirs), London again used France, she fought not for her interests. The French emperor "cooled off" and began secret negotiations with Petersburg.

But then Austria and Prussia, the "allies" of Russia in the "Holy Alliance", intervened. Austria, which Russia retained as a country (and in vain, it was necessary to let the Hungarian rebels win in the 1854 year), in an ultimatum, under the threat of a declaration of war, demanded that Russia withdraw its troops from the Danube principalities. Although these troops could, with the neutrality of Austria, attack Turkish territory.

Due to the “incomprehensible behavior” of Vienna, Nicholas I was forced to hold considerable forces on the border with Austria, without sending them to the Crimea. After the unexpected death of Nicholas Alexander I in December 1855, the Austrian ambassador Count Esterhazy presented a new Austrian ultimatum to St. Petersburg: "If Russia does not express its consent to accept the preliminary conditions of peace in the world of five points, the Austrian government will be forced to declare war." The deadline for receiving the Russian response was set to 18 January 1856 of the year.

Information: The 5 clauses of the terms of the world included the conditions for neutralizing the Black Sea, for giving Russia the right of an exclusive protectorate over Moldova and Wallachia, about the freedom of navigation on the Danube (which was associated with the loss of part of Bessarabia), about Russia's consent to the collective protection of all the great powers living in Turkey, Christians and Christian churches, the ability of powers in future peace talks with Russia to raise new questions and present new claims "in the interests of the durability of the world."

A few days later, the Russian emperor received a letter from Friedrich-Wilhelm IV, who called on the Russian emperor to accept the Austrian conditions, hinting that otherwise Prussia could join the anti-Russian coalition. But only after long hesitations and repeated meetings with the highest dignitaries, Alexander II 15 of January agreed to accept the ultimatum as a prerequisite for peace.

The signed Peace of Paris, of course, infringed upon the interests of Russia, although, contrary to London’s hopes, territorial losses were minimal:

- Russia refused to strengthen the Aland Islands in the Baltic;

- agreed to the freedom of navigation on the Danube; refused the protectorate over Wallachia, Moldavia and Serbia and from the part of southern Bessarabia that had departed to Moldova (thus, Russia ceased to directly border with the European part of Turkey);

- Russia returned Kars occupied from Turkey (in exchange for Sevastopol and other Crimean cities);

- the most unpleasant for Russia was the actual ban on having a navy on the Black Sea. Thus, the Russian Empire was placed in an unequal position with Turkey, which retained fully its naval forces in the Sea of ​​Marmara and the Mediterranean.


The European public was also not happy: the war in England was considered “unsuccessful”, and the world was “not brilliant.” The 76 of millions of pounds spent on the war clearly did not pay off. France actually received only “moral satisfaction” - revenge for the 1812-1814 years, spending a lot of money and losing thousands of soldiers. Turkey also won almost nothing. Sardinia also received nothing. Austria from a friend became the enemy of Russia, not having received new friends.

And Russia rather quickly restored the lost. In the 1870 year, after the crushing of Prussia by France, it announced its rejection of the restrictions of the Paris Treaty on the Black Sea Fleet. And Russia returned Southern Bessarabia and the exit to the mouth of the Danube in 1878.

But the main result of this war for Russia was the fact that the Crimean War was nothing more than the first fundamental defeat of Russia in the fight against world globalism. According to historian Artemy Yermakov, as a result of the so-called Great Reforms of Alexander II caused by the war, our country actually “lost those internal estate-corporate mobilization mechanisms that for two and a half centuries provided it with relative internal stability and allowed to reflect serious external threats. “After the loss of these mechanisms, the collapse and disintegration of the Russian Empire and its political system was only a matter of time,” the historian believes. (a source: http://pravaya.ru/govern/391/16764).

That is, thanks to the incorrectly chosen strategy of the foreign and domestic policies of the emperors Alexander I, Nicholas I, Alexander II, which Alexander III was able to “freeze”, but did not fundamentally change, the Russian Empire eventually collapsed. 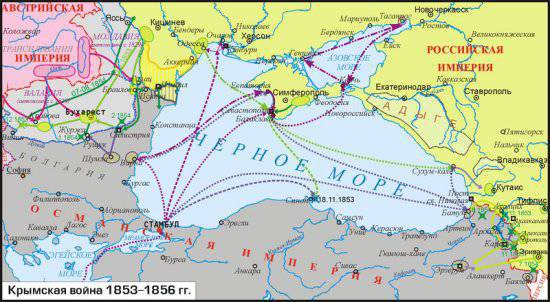