US Department of the Army is studying the "underground wars"

February 14 2014
25
Local conflicts in recent decades have a number of specific features that must be considered when planning operations. In addition, some features of modern wars impose special requirements on the equipment and structure of the armed forces. Not so long ago, the Ministry of the United States Army began to explore a new promising direction. At this time, the views of the military and specialists turned to fighting under the ground. 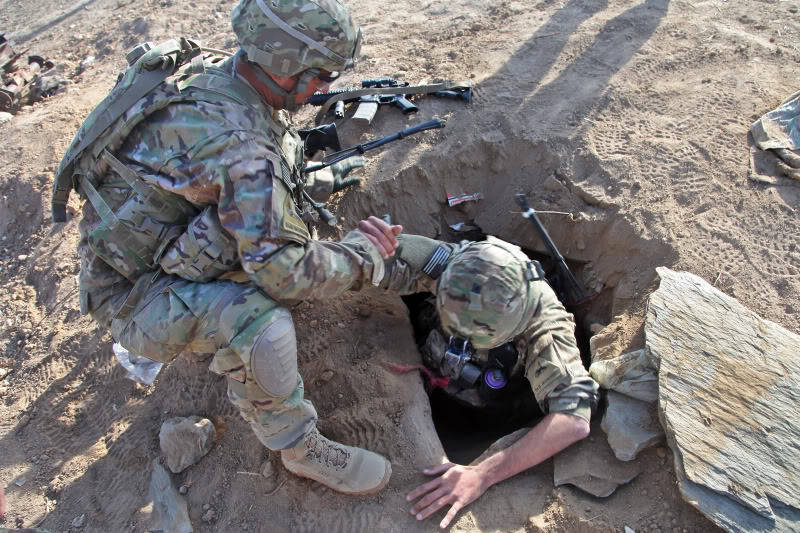 In mid-December, the US Army Department issued another request for information. In accordance with this document, any interested organization can provide the information available to the military about existing and prospective weapons or equipment systems suitable for conducting combat operations underground. It is noted that the request for information is not an offer of cooperation or an invitation to participate in any program. For now, the officials of the Ministry of the Army intend only to study the existing situation in the prospective area and draw the necessary conclusions.

The interest of the US Army Department in technology and equipment for the conduct of hostilities in underground conditions is due to certain features of recent conflicts. During the recent local wars, some opponents of the American army actively used various underground tunnels, etc. structures. It is noted that a large number of such objects are available and used in the Middle East. In addition, with the help of underground tunnels, organized crime smuggles in various cargoes across the borders with Mexico and Canada. To prevent such illegal activities and to effectively counter enemy armed groups, the US Army may need special units equipped with the necessary weapons and equipment and capable of working in the conditions of the dungeons.

The Ministry of the Army wishes to receive information about the existing and prospective systems that allow increasing the combat potential of the “underground” units of the army. Officials are ready to consider any proposals that meet the general requirements, and also do not contradict the restrictions imposed. It is particularly noted that weapons and equipment for conducting combat under the ground should not pose a danger to the fighters. They should not contain or use toxic components, and the application should not be associated with the generation of hazardous waste or the appearance of other factors from which the fighter cannot be protected.

One of the main requirements for promising systems is mobility. All components of weapons or equipment should be small in size and weight, which will allow them to carry alone. In addition, equipment and weapons should not prevent the soldier from moving. For example, the equipment of a fighter may include some climbing equipment, and a detachment may receive a robotic transport system.

Fighters must be protected from automatic weapons caliber 7,62 mm and hand grenades of the enemy. To do this, the composition of the promising equipment must include appropriate means of protection. Fighting in the confined space of an underground tunnel or structure associated with large loads on the organs of hearing. In this regard, it is required to provide appropriate protection.

The composition of the equipment of the soldiers must include various means of intelligence, allowing to study the situation and act in accordance with it. Fighters must in time find and recognize various threats, including chemical, nuclear and biological. Soldiers can use various gas analyzers, systems for analyzing the integrity of the surrounding rock, etc. to perform such tasks.

To penetrate or exit a detected tunnel, soldiers must be able to use destruction systems. For this, explosive, mechanical, ballistic or thermal means can be used. As an example of such systems, mechanical or hydraulic tools for various purposes, primarily cutting, are given. In addition to tools for the destruction of equipment "underground" units should include protective equipment. It is particularly noted that the means of destruction should not be a danger to the fighters.

Life support systems should become a mandatory component of the equipment of the units. During the conduct of hostilities under the ground may cause a situation in which the surrounding air will be unsuitable for breathing due to low oxygen content or the presence of toxic substances. To do this, in the outfit of soldiers there must be air quality assessment systems, as well as personal protective equipment: gas masks or insulating breathing apparatus. In addition, the fighters need to be equipped with evacuation systems, with which they can quickly leave the danger zone.

Underground tunnels and facilities in which soldiers will have to act may not be equipped with lighting. For this reason, fighters must have their own light sources capable of providing acceptable usability. In addition, it is possible to include in the equipment infrared illumination devices suitable for sharing with night vision devices.

Until the end of May 2014, the US Department of the Army accepts proposals from interested organizations. The latter are invited to send their proposals on those or other technologies that meet the requirements. The documents sent to government or commercial organizations are invited to describe how the equipment or technology offered by them can be used by the military in underground battles. In addition, potential contractors should provide a list of restrictions on using the proposed technology in combat conditions. Finally, the Ministry of the Army wants to know what tests and tests have already passed the proposed equipment or technology.

Now the US Army Department is collecting general information regarding a promising direction. The collection of information will be completed in the late spring of this year, after which the analysis of the received documentation will start. Thus, the first information about further work in this direction will not appear before mid-summer. Probably, after analyzing the data, officials of the Ministry of the Army initiate the beginning of a new program, during which the proposals received will be tested in practice. The deadlines for the completion of such works, for obvious reasons, are still unknown.

While the acceptance of documentation continues, the prospects for a new direction are not fully understood. It cannot be excluded that according to the results of the analysis of the collected information, the Ministry of the Army will abandon the existing plans and will not develop the means of conducting the “underground war”. However, another development of events seems more likely. Most likely, ministry officials will gather certain information that will allow for certain research and design work. If the proposed ideas justify themselves, then in the US armed forces may appear special units that can operate effectively in underground conditions.

The emergence of such units primarily represents a danger to various terrorist groups, with which the United States has been actively fighting over the past years. For example, in some provinces of Afghanistan, American soldiers had to fight against Taliban troops hiding in an extensive system of tunnels and caves. Similar systems, according to available information, exist in a number of other unstable regions. Thus, the work on the equipment of fighters for the "underground war" is the answer to one of the features of modern wars.

It should be noted that the possible creation of special units capable of working in underground structures, tunnels and communications, poses a certain danger to third countries. The defense doctrine of a large number of states implies underground placement of important objects: from command bunkers to ballistic missile mines. Thus, the goal of new American units can be not only terrorists hiding in the tunnels, but also important objects of the enemy countries.

So far it is impossible to talk about it with confidence, but in the future, special units capable of conducting military operations in the conditions of dungeons can not only become a means of combating an enemy buried in the ground like terrorists, but also perform various sabotage functions. Such capabilities of such units can be a serious argument in favor of their creation. This means that after the end of the reception and analysis of the documentation one should expect the appearance of messages about the beginning of work on a promising project.