February 14 2014
62
19 February 2014 Russia celebrates the 190 anniversary of the birth of the outstanding Russian teacher Konstantin Ushinsky. This man, a native of the city of Tula, actually laid the foundation of national pedagogy as a full-fledged science with its own laws, rules and development trends. The contribution that Konstantin Dmitrievich made to the development of national education is truly invaluable. The works of Ushinsky have been translated into dozens of world languages, and the total circulation of his scientific and pedagogical works is incalculable. Konstantin Ushinsky has left a great legacy for most people who have chosen the education system as their professional path - training and raising the younger generation.


However, if a great teacher were in the average educational institution of our day, came into contact with modern didactic, educational methods and methods of controlling the quality of students' knowledge, then we can assume that Konstantin Dmitrievich would be quite surprised. Against the background of total informatization, access to both teachers and students to virtually any data source; against the background of frank liberalization of the education system, it is possible to state a clear decline not only in the average quality of knowledge of a modern school graduate, but also in a decline in the professionalism of the teaching staff.

Officials from education in this case will say that the author of the material is cunning, because according to the reports of the heads of educational institutions, modern schools in terms of the quality of knowledge and academic performance of students have significantly “jumped” up even in comparison with the Soviet period. According to these reports, it turns out that the average percentage of academic performance in Russian schools is very close to 99,9%, and the quality of knowledge (only the “fours” and the five ”in certificates) has exceeded 40%. That is, only one out of a thousand may not receive a certificate, and more than 40 graduates from each hundred will certainly be good and excellent. 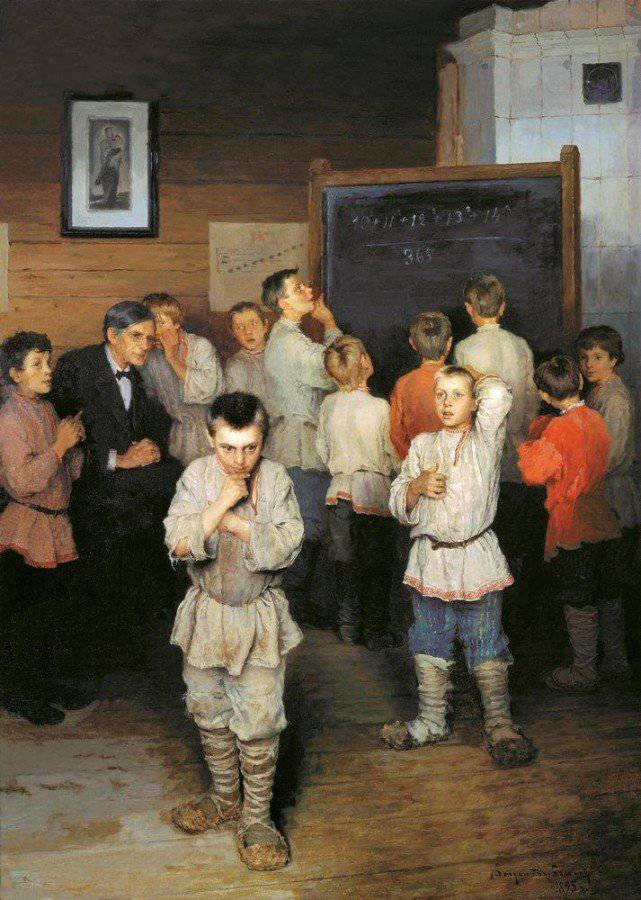 The leaders of large urban schools can go even further in their reports, offering even more gracious figures. To see these figures, it is enough to look at publicly available reports on school websites. The first report that came to our eyes (according to the results of the 2011-2012 school year) of one of the metropolitan schools gives literally the following: the average percentage of the quality of knowledge, that is, the percentage of graduates who worked exclusively “well” and “excellent” in this school (not we will call her number for the simple reason that in hundreds of other reporting pictures are very similar) is 76%! That is, if certificates in this school received 50 people in that year, then as many as 38 graduates graduated from school without triples. Only 12 "losers" managed to "grab" threes for certain subjects ... Look, you rascals! - disgrace modern Russian education with its low marks ... Shame and shame, you know ...

And this is a common school!

In the so-called lyceums and gymnasiums of the “name of someone”, which, judging by the letter of the new law on education, will still have to change the signs for more modest, the results are even more impressive: what is the percentage of the quality of knowledge? - so 100%! Triads? - We do not know these ...

But if officials from education consider the data coming from the regional leadership of educational institutions to be plausible, then it is difficult to call such a hypocrisy as hypocrisy. To learn about the real level (average, natural) of the knowledge and skills of modern schoolchildren (and often the teachers along with the textbooks compilers), you do not need to sweat, studying the reporting documentation on certain subjects, on these or other schools - you just need to talk to students, or look at how many people apply their knowledge in an unfamiliar situation. This, of course, is not about all modern students, because talented children and children who are ready for truly high-quality education have been and will be at all times, talking about, let's say, the average statistical trend. After such observations, the picture for a person who was related to the education system of the Soviet period (taught or studied) will be obvious: any average modern “good” is (in terms of knowledge and skills) Soviet triad, and troechnik - at best ...

What leads to the fact that the quality of students' knowledge grows on paper, but decreases in practice? There are many reasons for this. We will not deal here with questions of the teacher’s wages - this is a perennially sensitive issue. Let's leave it for purely economic materials. Now for other reasons.

One of the reasons - total bureaucratization of modern schools. The teacher, instead of devoting time to the questions of better learning “pets”, issues of continuous self-education, the creation of actually working in practice didactic schemes, is forced to plunge into keeping statistics, accounting and accounting documentation. Work plan for the day, work plan for the month, calendar (prospective) work plan for the year, report on educational activities for the week, for the month, for the semester, for the year, and even for the five years (the five-year plan) work (to provide information for a higher category), text report, graphic report, publication of the report on the personal page on the Internet, entering the report into the teacher's portfolio. A plan for writing plans ... Report on the delivery of reports ... What self-education is there, what is the dialogue with students ...

And in most cases, reports should be "with growing dynamics." If in the 2010-11 school year there was 40% knowledge quality in the subject of Marivanna, in 2011-2012 - 42%, in 2012-13 - 44%, and only try if it has less in the 2013-2014 school year! .. Of course, no one will shout, but the head of the meeting (or the teachers' council) will definitely say: this year, our Marivanna worked worse, worse ... Why are you, Marivanna, do not keep up with school-wide indicators? .. This is a bonus, this is additional funding, this is a school budget ... So Marivanna will have to be forced into 2014-2015, if she isn’t asked yet have "for the decline of indicators," redeem ", giving out all 76, and even 176 percent ... Will be forced in an evaluative sense to" pull up "Vasya from 10" B ", who sincerely believes that Yuri Alekseevich Gagarin (the same) this is not only the first man in space, but also a hero of the Great Patriotic War, and he is confident that the American astronauts who landed there have measured the surface of the Sun ... (The "Kazus" with Yuri Gagarin and the surface temperature of the Sun are not invented by the author of the material, these are real answers students of one of the Voronezh schools Awarded the so-called “transferable” credit in physics and natural science, and those who claimed to be “good”).

Another reason - literally, sorry for the term, cluttering up domestic educational institutions with textbooks and manuals, which often simply contradict one another. There is no single educational model - there is no “uniform” textbooks. There are no uniform textbooks, but there are pseudo-educational aids on which someone just makes excellent money.

Today, in the same class, children can study different textbooks on 3-5 (and this is only in one subject). And if the authors of textbooks on exact sciences (mathematics, physics, chemistry) can simply interchange chapters or paragraphs in order to be able to issue a “new” textbook (this is still half the problem), the authors of textbooks of the humanities cycle are often hard at work. each other, publishing unconfirmed information from authoritative sources, their personal conjectures, “experiences”, and even outright blunders. The problem is that these textbooks often pass through reviewers (associate professors, professors, academicians) without much difficulty. Question: Do reviewers read textbooks before podmahnut - put their signature where necessary, or envelopes with money and here it is more important than honor to be called a scientist, a star of science? Often textbooks contain both actual and spelling errors. Either the author is nudged, or the compositor ... 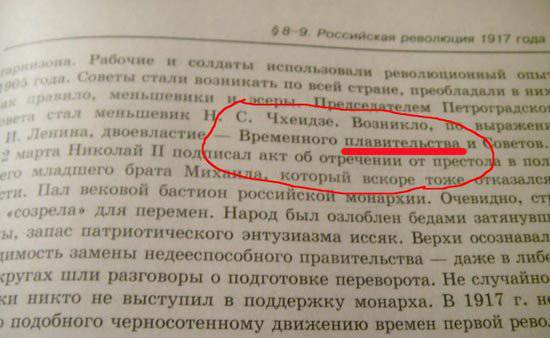 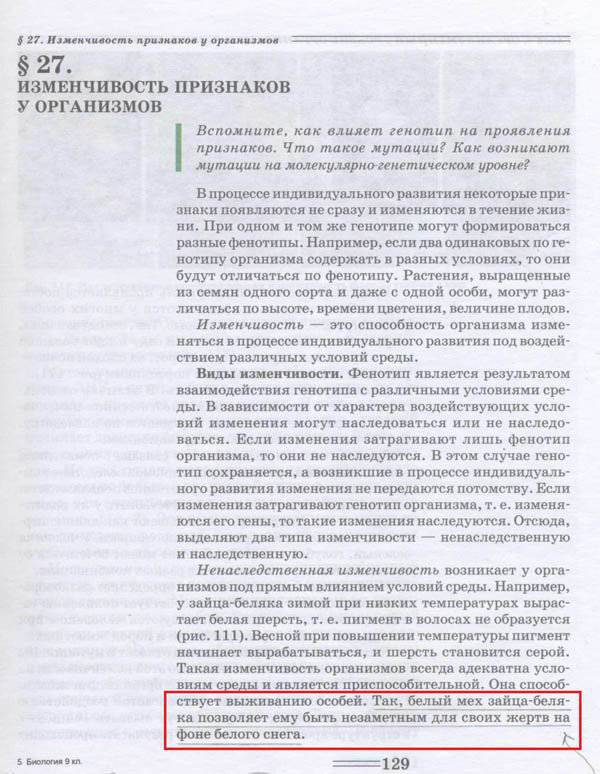 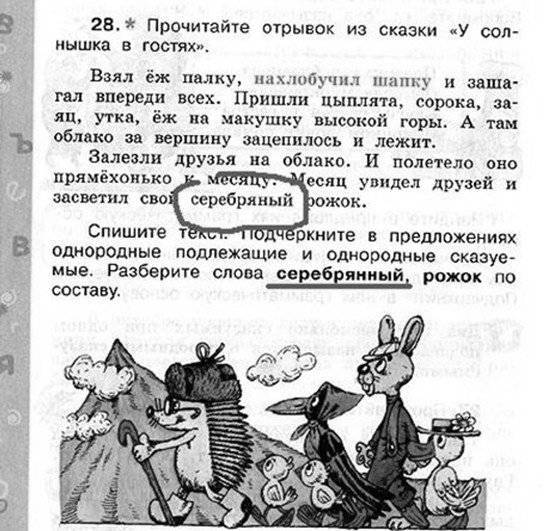 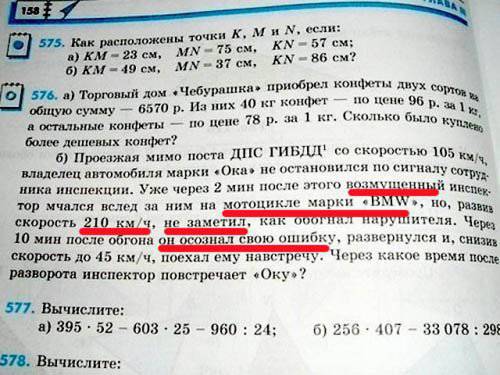 And from the exam: 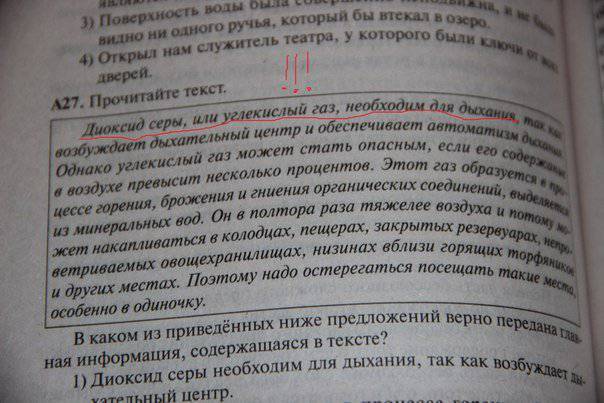 Quite a lot and other reasons reducing the level of education: a change in the generation of teaching personnel after the pit of the 90's. The use of liberal techniques that literally feed on students inexhaustible infantilism. Demographic problems. Strange experiments of the Ministry of Education. Powerlessness of the teacher and at the same time decrease in teacher credibility.

If the current state of affairs in the educational sphere does not change, if the formality and the “paper” indicators continue to occupy the main positions, then this may well lead to discrediting of education as such. While such a disastrous system has not yet had time to become numb, there is still a chance to fix it. They destroyed and trampled a lot of things that at different times made our education one of the best in the world - it’s time to start building up competently without inventing bicycles and fighting windmills for good performance.

The head, filled with fragmentary, incoherent knowledge, is like a pantry, in which everything is in disarray and where the owner himself will not find anything; the head, where only a system without knowledge, looks like a shop, in which there are inscriptions on all the boxes, and the boxes are empty.

You can expand your knowledge only when you look straight into the eyes of your ignorance.

Ctrl Enter
Noticed oshЫbku Highlight text and press. Ctrl + Enter
We are
Inequality in education. Only affordable education will make Russia a strong state.In Donetsk, the OSCE missions painted their eyes, and in Lugansk they celebrated the 100 anniversary of the birth of Matusovsky
Military Reviewin Yandex News
Military Reviewin Google News
62 comments
Information
Dear reader, to leave comments on the publication, you must sign in.