80 years ago sank the ship Cheluskin

February 13 2014
13
The name of the steamer "Chelyuskin" is familiar to many Russians, especially older ones. In this case, not everyone clearly remembers what exactly this ship became famous for. The Chelyuskin expedition in the middle of the 1930s had to prove the suitability of using the Northern Sea Route (NSR), which was planned to be used to supply the Far East and Siberia with everything necessary. In the summer of 1932, from Arkhangelsk to the Bering Strait, the Soviet icebreaker Alexander Sibiryakov successfully passed. The success of the icebreaker was to repeat the cargo ship. The ship “Chelyuskin” became such a ship.


The ship was named in honor of the participant of the Great Northern Expedition Semen Ivanovich Chelyuskin (1700-1764). This Russian explorer discovered the northernmost point on the continent of Eurasia - the cape, which now bears his name. It is worth noting that the campaign 1932, was not without adventures. The icebreaker Alexander Sibiryakov lost a screw in the Bering Strait, so he had to move astern under homemade sails. And yet he was able to go from Murmansk to Vladivostok in just one navigation, i.e., during the summer-autumn period. The captain of the icebreaker in this voyage was Vladimir Ivanovich Voronin, and the head of the expedition was the famous Soviet professor Otto Yulievich Schmidt.

Immediately after the completion of this first expedition to the USSR, the Main Directorate of the Northern Sea Route was organized, abbreviated as Glavsevmorput. The new organization had to master this way, build the necessary villages, provide the road with the necessary technical equipment and do much more. The above-mentioned O. Yu. Shmidt became the head of Glavsevmorput. New campaign on the route of the SMP, he decided to hold already in 1933 year. With great difficulty, Schmidt managed to achieve a transfer to the Glavsevmorput of the new, just built on the Danish shipyards, the steamship Lena, which was renamed Chelyuskin. 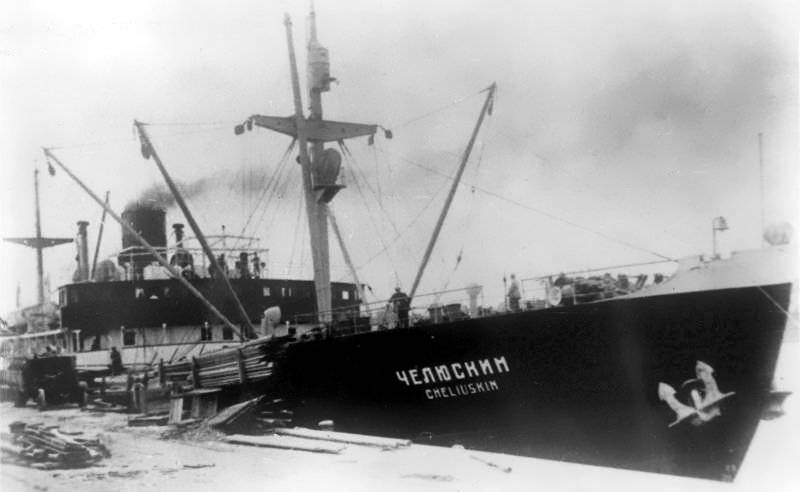 The ship was built in Copenhagen in the shipyards of the company "Burmeister and Vine" by order of the USSR. It was a fairly large steamer of the latest design at that time. During the construction of the vessel were taken into account the conditions of its operation in the ice. The hull of the ship had the appropriate shape, and the hull shell was strengthened. The ship also had a special room designed for the case of a forced wintering, when the power plant would have to be stopped in order not to waste fuel. Even a small amphibious aircraft W-2 was placed on board the ship. The plane could take off both from a large ice floe, and from open water, and was intended for conducting aerial reconnaissance.

It should be noted that in those years the Arctic achievements were a brilliant find for Soviet propaganda. At this time, the polar explorers were the people whose place through 30 years was to be taken by astronauts. The theme of the development of the North in the Soviet Union was associated with the courage of polar explorers and the romance of Arctic everyday life; it did not leave the pages of Soviet newspapers and magazines, as well as fiction and movie screens. As a result, a whole generation of citizens was formed, for whom work in the Soviet Arctic Circle has become a lifelong business. The era of the 30s was reflected in these people. They were moved by all that sublime and pragmatic, romantic and terrible that was inherent in that time.

16 July 1933, the steamer “Chelyuskin” under the command of the famous polar captain V.I. Voronin and the expedition head O.Yu. Schmidt, who, among other things, was a corresponding member of the USSR Academy of Sciences, sailed from Leningrad to Murmansk. On the way, the ship entered the Danish docks of the company Burmeister and Vine, where a number of identified defects were eliminated on the ship. 10 August 1933, the ship left the port of Murmansk and set sail for Vladivostok. The expedition had to work out the scheme of cargo delivery along the NSR during one summer navigation. On difficult sections of the route, the Chelyuskin wiring was planned using icebreakers.

The steamer left Murmansk early in the morning at 4: 30. Because of such an early time, there were not many mourners at the pier. On board the Chelyuskin, there were 112 people, including 53 crew member, 29 people from the expedition, as well as 18 winter workers of Wrangel Island and 12 builders. The vessel had significant reserves: 2995 tons of coal, 500 tons of water and food, which should have been enough for 18 months. The ship also took on board a three-year supply volume for Wrangel Island. It is worth noting that the expedition took quite seriously the issue of nutrition of its members. In order for the crew of the ship to eat fresh meat, 26 cows and 4 small pigs were taken on board, which in the process of navigation turned into healthy boars and helped diversify the menu of polar explorers.

At first, the voyage was quite successful for the expedition. "Chelyuskin" managed to pass almost the entire route. The ship entered the Bering Strait and on November 7 sent a special welcome message to Moscow. However, in the strait began the movement of ice in the opposite direction. The steamer “Chelyuskin” squeezed in the ice began to move in the opposite direction, once again entering the Chukchi Sea. This return was accompanied by damage to the ship. As a result, the ship just froze into a large ice floe and for several months was forced to drift along with it. At the same time at any time the ice could come into motion and just crush the ship. And so it happened ...

13 February 1934 of the year went on the air radiogram, which told the world about the death of the steamer "Chelyuskin". The ship sank 13 February 1934 of the year in 15: 30 in 144 miles from Cape Whalen and in 155 miles from Cape North, being crushed by ice. Captain Voronin and the expedition leader Schmidt were the last to leave the ship, while the breech Boris Mogilevich hesitated on the deck of the ship and was pinned down by a barrel rolled over him. He went to the bottom with the ship and became the only victim of the expedition. After the ship flooded, the 104 man remained on the ice, including 10 women and 2 children (a daughter was born to the family of surveyor Vasiliev). Another 8 people left the ship before the events described near Cape Chelyuskin for various reasons, mainly due to illness. 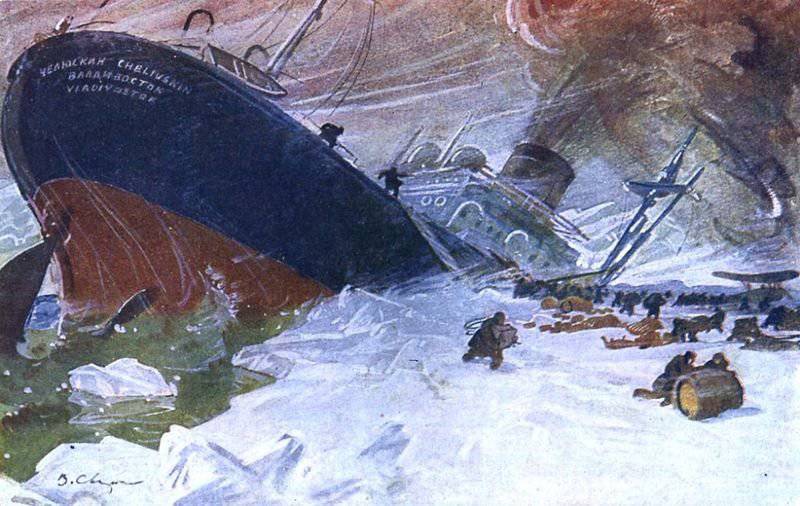 As a result, exactly 2 month - from February 13 to February 13 1934 of the year - members of the polar expedition had to fight for life. All 104 members of the expedition carried out the heroic work of organizing normal life on the ocean ice, as well as preparing the airfield, the field of which was covered with cracks and hummocks, was covered with snow, and the ice on it was constantly broken. Chelyuskinites were able to build a good camp. For women and children, a full-fledged wooden hut was built, the benefit on board was the necessary lumber. Also, members of the expedition built their bakery and even began to produce a wall newspaper entitled “We do not give up!” At that time, Otto Schmidt, the expedition head, was the soul of the camp. The connection of the expedition to the mainland all this time was provided by Ernst Krenkel - the famous polar radio operator.

The rescue of the Chelyuskinites turned into a real epic and became a glorious page in stories domestic polar aviation. The first landing in the Chelyuskintsev camp on March 5, 1934 was made by the crew of the ANT-4 aircraft under the control of Anatoly Lyapidevsky. Prior to this, the crew under his command made 28 sorties, only the 29th was successful. This is not surprising: to find a drifting ice floe with polar explorers with periodically falling fog was not so easy. At the same time, Lyapidevsky managed to land the aircraft on a very limited area of ​​150 by 400 meters in a 40-degree frost. It was a real feat.

The first flight ANT-4 aircraft took out women and two children from 10 camp, but the aircraft failed for the second time and its crew was forced to join Chelyuskinites. The massive evacuation of polar explorers began in 13 days and lasted two weeks. In total, the Soviet pilots performed the 24 flight, and all the 104 people who happened to be on the ice floe and 2 who spent months in the polar winter managed to save them. All pilots who took part in the rescue of polar explorers were presented to the title of Hero of the Soviet Union. Among them were Anatoly Lyapidevsky, Mavriky Slepnev, Vasily Molokov, Nikolai Kamanin, Mikhail Vodopyanov and Ivan Doronin. All participants in the wintering on the ice, including B. Mogilevich, who died during the sinking of the ship, were awarded orders of the Red Star (except for children). Two Americans, flight mechanics William Levery and Clyde Armstead, who received the Order of Lenin, were also awarded for help in saving Soviet polar explorers. 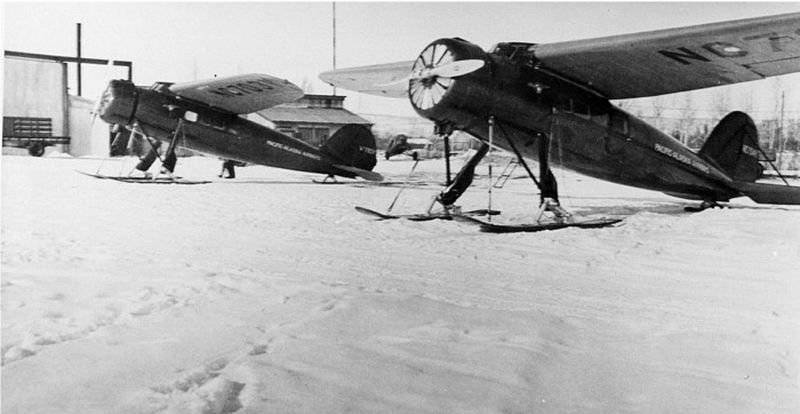 In Moscow, all Cheliuskites had a solemn meeting with the leadership of the Soviet Union and the inhabitants of the city, they were greeted like real heroes. The history of the steamer "Chelyuskin" is reflected in literature and cinema. Based on this expedition, several feature films were shot, books were written. The memory of the Chelyuskinites was immortalized in a large number of streets, which today can be found in many cities of Russia, Ukraine and Belarus.

In the recent past, attempts were made to locate a wreck. The expeditions that were organized in 1974 and 1978 ended in nothing. A new search submarine expedition was already organized in Russia - in the 2004 year, on the 70 anniversary of the events described. The expedition was named Chelyuskin-70. The participants of this expedition declared the discovery of a sunken steamer that same year, but soon enough managed to find out that this information was erroneous.

The ship was discovered in 2006 year. Fragments of the ship lifted from the seabed and metal samples taken were sent to Denmark at the shipyards on which the ship was built. In February 2007, the Danish shipbuilding company confirmed that the found fragments belonged to Chelyuskin. In particular, the ventilation grille and guard rail rack, which were raised from the bottom of the Chukchi Sea, really belong to the legendary steamer. The discovery of the sunken ship put an end to this whole story.