As the Americans first flew into space

February 13 2014
59
Although NASA selected the first astronauts for space flight back in 1959 year, States could not get ahead of the Soviet Union. 12 April 1961 was the first man in space, Yuri Gagarin, and the Americans flew a month later.


Initially, the test team consisted of 110 pilots. NASA immediately eliminated men above 180 cm (they would not fit in the cabin of the ship) and older than 40 years. Then they were selected according to the following criteria: a candidate must be a qualified pilot, have at least 1500 hours of flight, a compulsory bachelor's degree and excellent health. Each of the remaining 32 people underwent a series of grueling physical, psychological and emotional tests. Each was placed in extreme conditions of heat and cold, as well as strong vibrations and noise characteristic of a rocket launch. After all the tests, 7 people remained, with no medical contraindications that NASA could recommend. The list was announced at the beginning of April 1959, with Malcolm Carpenter, Leroy Cooper, John Glenn, Gus Grissom, Walter Schirra, Donald Slayton and Alan Shepard. Over the next few months, the press followed every step of this team, eagerly awaiting who would be America’s first astronaut. And only in February 1961, NASA announced that Alan Shepard would fly into space, and Gus Grissom was appointed as the backup crew astronaut. 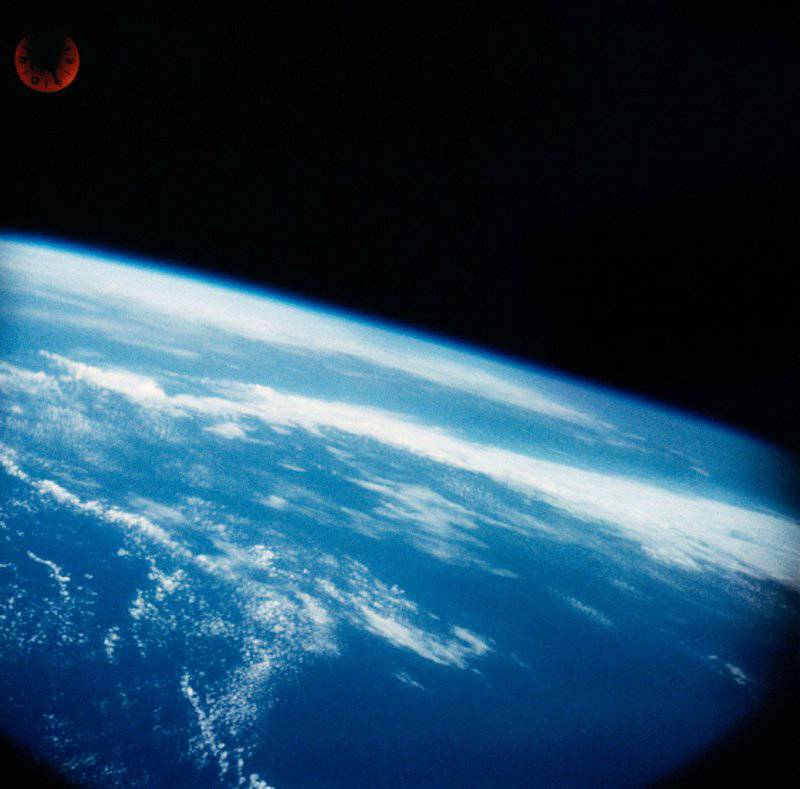 Photo of the Earth, taken from the board of Freedom 7

The flight of the spacecraft "Mercury-Redstone 3" was the second manned flight into space and the first - for the United States.

For three days before the flight, the pilot lived in a separate apartment on Cape Canaveral. He had everything necessary for life: a comfortable bed, TV, radio, newspapers and, of course, personal space. The astronaut was protected from the attention of the curious public, and the apartment also had a certain degree of protection against vectors of infectious diseases.

The astronaut was assigned a strict diet and provided with a personal chef. The report stated that the menu was compiled by “Miss Beatrice Finklestein of the Aerospace Medical Laboratory. The diet is delicious and nutritious. " Here is an example of breakfast: orange juice - 4 ounces; semolina - 1 portion; scrambled eggs from two eggs; 1 white bread toast; crispy bacon - 2-3 pieces; butter - 1 h. spoon; strawberry jam - 1 Art. spoon; coffee with sugar - unlimited. The list of dishes has not changed. The cook prepared several servings, one for an astronaut, several for other people, and another portion was put in a fridge for 24 hours to conduct research if the astronaut had problems with the digestive tract.

NASA recommended the astronauts go to bed early, but this requirement was not strict. It is known that on the eve of the flight, Alan Shepard went to sleep in 22.15 and had not seen dreams that night. It was forbidden to drink coffee during the day before the flight because of its stimulating and diuretic effect. 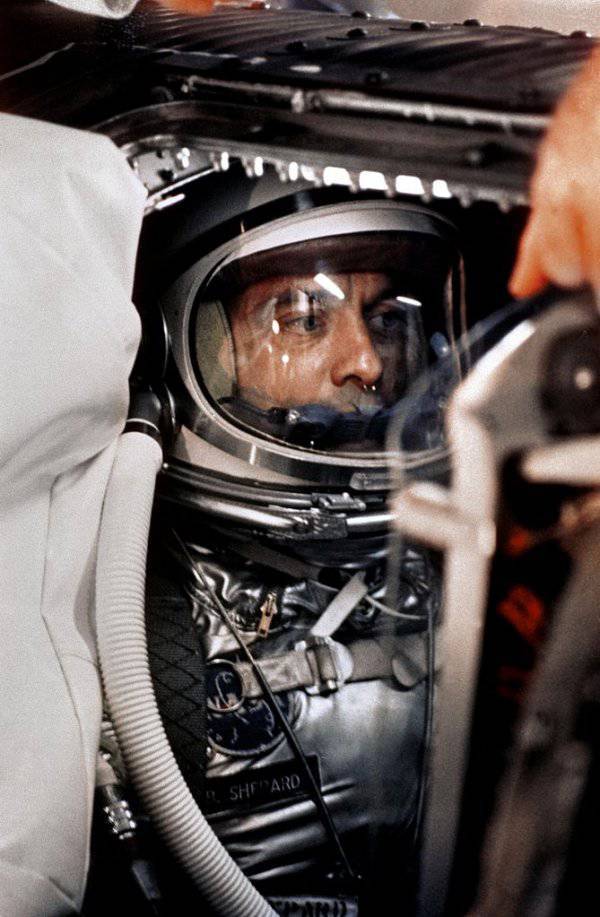 Alan Shepard aboard Freedom 7 before launch

The flight of Americans is more like a "jump" into space. The Redstone launch vehicle could not reach the first cosmic velocity and go into Earth orbit, the flight was suborbital. The device rose to a height of 187 km and landed back, the entire flight took 15 and a half minutes. Americans believe that if NASA did not listen to Von Braun, Shepard would fly 24 in March and thus become the first person in space instead of Gagarin.

On the day of the flight, Shepard awoke in 1: 10 nights and proceeded with the usual procedures. After breakfast with co-pilot Grissom Shepard went for a medical examination. Biosensors were connected to his body, the places for which were pre-marked on the skin. In 5: 15, the astronaut was already on the take-off site and sat in the capsule of the spacecraft. The size of the "Mercury" was 1,9 m in diameter and almost 3 m in height. Inhabited compartment was no more than a fighter aircraft cabin. Two movie cameras watched the flight: one shot the dashboard, and the second - the astronaut's face. In addition, unlike the Soviet "East", there was no porthole in the "Mercury".

NASA technician Schmitt helped Alan close the hatch, shaking his gloved hand with the words: "Happy landing, Commander!" Later, Alan said that it was the most dramatic moment that he remembered to the smallest detail the rest of his life. Heartbeat increased, but Shepard quickly calmed down. In 6: 25, he began breathing pure oxygen to prevent air embolism or decompression sickness.

Start "Mercury" postponed several times. Over 15 minutes before the start, the sky was covered with clouds, visibility dropped dramatically. Weather forecasters promised clarification within an hour, so Shepard relaxed, looking at the periscope. When this problem was resolved, another trouble happened - one of the IBM 7090 computers in Maryland failed, which required restarting the system. Waiting for the start was delayed for another two hours.

Shepard was in the cockpit for more than four hours, and in the end he wanted to relieve a little need. Starting team is worried. There is, of course, no toilet in the cabin, because it was assumed that the flight would take 15 minutes without any delay. In the spacesuit installed a lot of electronic sensors, and from the moisture circuit can occur. What a shame for the United States if the first American astronaut died during a launch from a circuit in his own urine! After a brief meeting, Shepard was allowed to go over the need for a spacesuit, after turning off the power. Fortunately, everything worked out - the liquid was absorbed in the laundry, and the contacts were not affected.

The long-awaited launch of "Mercury" occurred at 14: 34 GMT. At this time, all of America froze: traffic stopped on the streets, work was interrupted in all institutions. More than 70 of millions of Americans watched a live broadcast from the spaceport at Cape Canaveral.

The entire flight was calculated in seconds and went according to plan. Starting with 45 seconds, the launch vehicle with the astronaut began to shake violently. Shepard was prepared for this, but the vibration was so strong that he could not read the instrument readings. But it soon fell, so that the astronaut was again able to distinguish the data. The pressure in the cockpit was set according to plan, and, having experienced overloads in 6 g in the second minute after the start, Shepard was finally able to declare that all systems were working normally.

Redstone's stage separated on 142 second, and the capsule accelerated to 8 thousand km / h. The trajectory deviated from the course by just one degree. Outside, the plating temperature reached 104 degrees Celsius, and inside it was comfortable at 32 degrees. After 3 minutes of flight, Shepard proceeded to manual control. He rejected the nose of the capsule in different directions, rotated the ship along the axis. I looked through the periscope and enjoyed the beautiful views, gauging distances by eye. Through the clouds, Shepard could clearly discern the outlines of the mainland, the west coast of Florida and the Gulf of Mexico. He saw Lake Okeechobee in central Florida, but could not identify a single city. 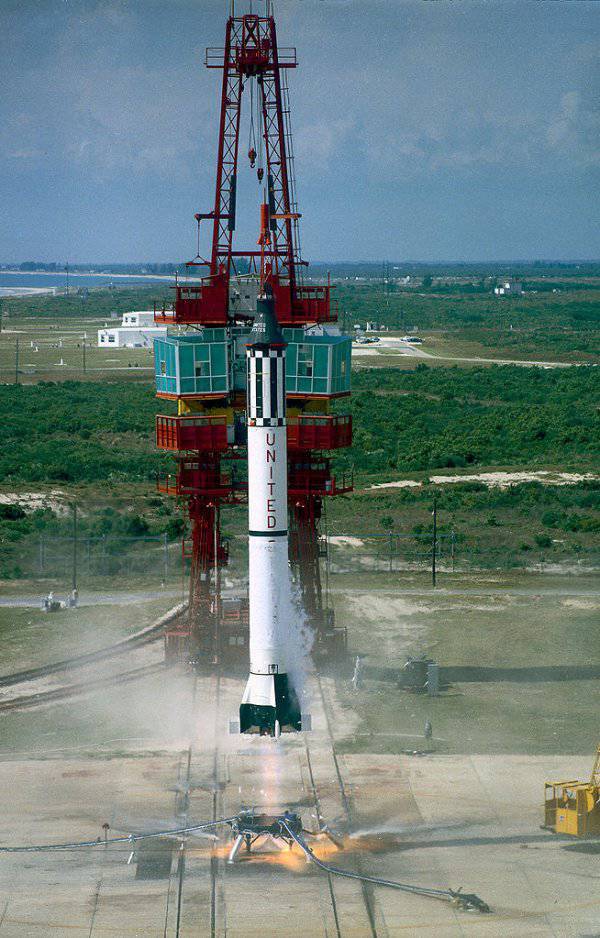 “Mercury” rose to the maximum height of 187 km, and after 5 minutes 10 seconds from the start of the start, the brake motors worked. During braking, the astronaut tried to see the stars, but did not even see the horizon. Then he said that these useless attempts had distracted him from the main task, and these seconds were the only ones during the entire flight when he did not control the situation. However, the feeling of indecision quickly passed. Weightlessness ended a minute earlier than expected, and the overload increased to 11.6 g. As soon as she began to decline, Shepard transferred the ship to automatic control.

"Mercury" was falling to the water at a speed of 11 m / s, at this time, Alan Shepard was preparing for landing. When the unit splashed down in 130 km east of Grand Bahama Island, it was already waiting for rescue helicopters. Freed from the suit, the astronaut left the ship, and half an hour after landing, Shepard was invited to the phone. He was phoned by President Kennedy, who watched the entire landing process on TV and personally congratulated Alan on the first space flight.

The cosmonaut was immediately surrounded by doctors to find out his condition and ask how he survived the flight with overloads and weightlessness. Some physiologists believed that even a few minutes in weightlessness could cause disorientation. But Shepard said that 5 minutes passed in zero gravity unnoticed, and he did not find any consequences. This is evidenced by how perfectly the astronaut coped with the manual control. Later it turned out that during the flight Shepard had damaged his hearing, and he was removed from space tests for several years. 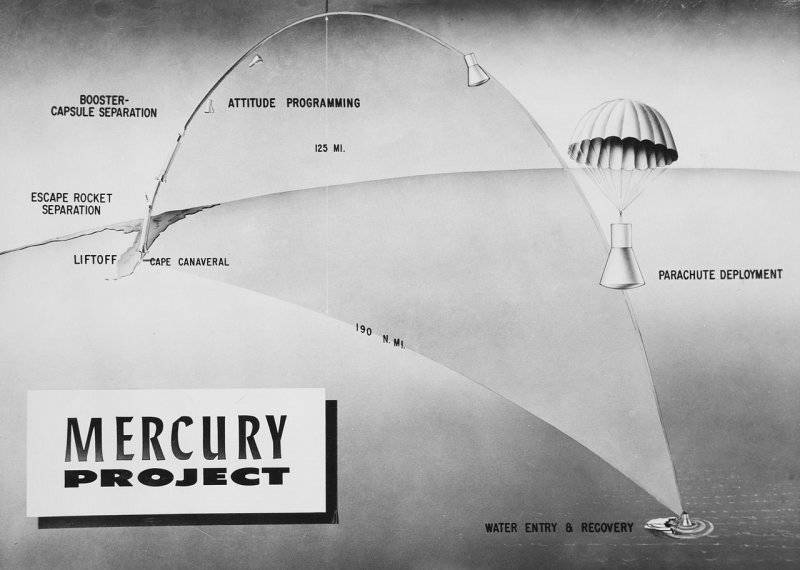 Ctrl Enter
Noticed oshЫbku Highlight text and press. Ctrl + Enter
We are
Cosmos: the first bloodToday 79 would be the first man who flew into space - Yuri Alekseevich Gagarin
Military Reviewin Yandex News
Military Reviewin Google News
59 comments
Information
Dear reader, to leave comments on the publication, you must sign in.