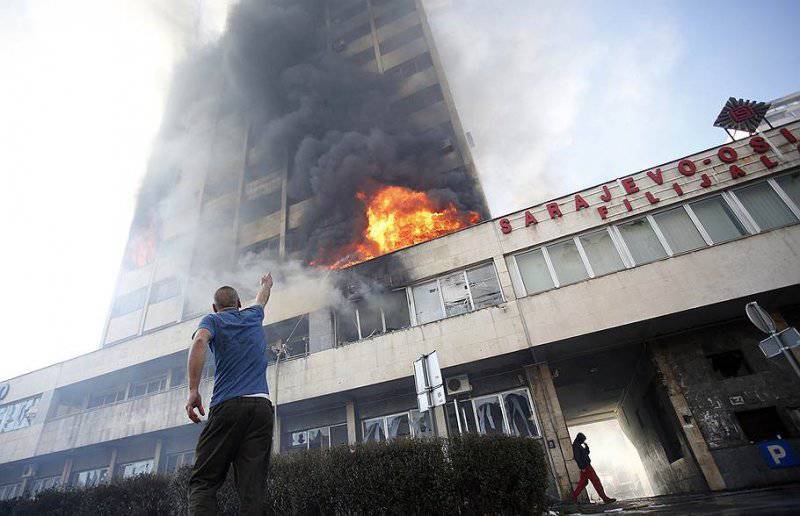 The Federation of Bosnia and Herzegovina is experiencing a severe crisis since the civil war: crowds of angry citizens chant anti-government slogans, smash offices and shops, set fire to administrative buildings. The demonstrations are directed against the country's “European integration” course (and, in fact, against corruption, nepotism and omnipresent poverty). It would seem that everything is simple: the citizens of the country condemn the painful reforms undertaken by the government for the sake of friendship with the European Union. However, one should not forget that Bosnia and Herzegovina is a special country: here the conflict of twenty years ago makes itself felt, and anti-Western meetings can turn into a new spiral of inter-religious and inter-ethnic confrontation.

The classic script in the Bosnian interpretation

The protest in Bosnia and Herzegovina is truly a popular one: unlike in Ukraine, there are no opposition members bought there who declare their intention to usurp power. In general, the demonstrators have no political program: the people simply yearn for justice, they want to get rid of the dictates of the West and corrupt politicians.

The start of the riot was 5 February, Wednesday. Then on the streets of Tuzla - a major industrial center and the third largest city in the country - there were about 600 employees of four recently bankrupt enterprises. Interestingly, these enterprises were artificially brought to bankruptcy: after privatization, their assets were sold out, and several thousand employees were simply put out of the door. Many of the people did not receive wages for two years.

Demanding payment of debts, demonstrators staged a picket near the city administration. The police arrived, who tried to force people from the administrative building. However, the protesters also received reinforcements: they were joined by football ultras who committed massacres in Tuzla.

6 February in the city held a new rally, more numerous. The police used tear gas against the demonstrators, re-driving them away from the city administration. At the same time, protests began in Bihac, Zenica and even in Sarajevo, the capital of the country.

February 7 events reached a climax: the police began to use not only tear gas, but also water cannons, as well as rubber bullets and stun grenades. Of course, all these special tools were bought in a “democratic Europe”, which is only happy to cash in on other people's misfortunes.

In turn, the demonstrators in Sarajevo burned down the government building of the capital's canton, the presidential palace, and in Tuzla, Travnik, Mostar and Zenica - local administrations. Unfortunately, in the fires, unique historical documents of the era of Austro-Hungarian rule. There were also recorded cases of looting: pogroms threw furniture, office equipment and valuables out of windows.

There were also cases of reprisals against officials. Thus, the mayor of the city of Brcko was held hostage for several hours, and in Zenica, cars belonging to high-ranking civil servants were drowned in the river.

8 February the conflict went into decline, and the first results of the confrontation were summed up. So, during the riots, about 200 people suffered, no one died by a miracle. In total, riots and demonstrations took place in Bosnian 20 cities.

The Bosnian authorities are surprisingly calm about what is happening in the country. Instead of suppressing protests, politicians call for peaceful dialogue and, at least in words, take all the blame for themselves. So did Zeljko Komšić and Bakir Izetbegovic, members of the presidium - the body that acts as president. Koshmich was elected to the presidency from the Croats, and Izetbegovic from the Bosniaks. The local authorities are in the same mood: the leaders of the administrations of Zenica and Tuzla resigned, as did the head of government of the Sarajevo canton.

However, such concessions are not needed by the protesters. They want a complete change of government: the current system is the result of a compromise between the Serb, Croat and Bosniak communities. It is malfunctioning, since each community defends its own interests exclusively, and often blocks the offers of foreign communities. As a result, the leadership of the republic cannot take even elementary decisions, and many pressing problems remain in a state of limitation for a long time.

Because of this, in Bosnia there is an unprecedented level of unemployment: according to some data, its volume reaches 44 percent. About 20 percent of the population is below the poverty line: the average salary in Bosnia is 420 euros or 19,7 thousand Russian rubles. Of course, prices in the country are higher than in Russia or the republics of the CIS, after all Bosnia seeks for Europe. The economy of Bosnia does not grow since 2009: then the country was severely affected by the crisis, and its GDP fell by 3 percent immediately.

To correct the imbalances, all issues should be resolved quickly, without excessive bureaucratic red tape. But this will have to destroy the order that exists since the civil war, namely, to abandon the federal structure. It is not known what will follow: the country will either slide into the abyss of a new civil war, or its parts will peacefully “divorce”, like the Czech Republic and Slovakia. In both cases, there will be nothing to reform.

The threat of foreign intervention

In addition, the European Union does not intend to let Bosnia and Herzegovina float freely. Let everything be terrible in the country - but how democratic it moves towards the West! The European Union is going to keep Bosnia in its sphere of influence to the last, even if it requires the use of force. So, European politicians are seriously talking about the occupation of the republic.

Valentin Inzko, UN High Representative in Bosnia and Herzegovina, said that the European Union could bring troops into the country to stabilize the situation. Some police units have gone over to the side of the people, which means that the authorities will not be able to suppress an anti-Western protest, even if they wish. Foreign militaries, unlike the police, do not sympathize with the unemployed demonstrators, and can easily “restore order”. And they will even shoot - yes, that is the price of democracy.

In fact, the power in Bosnia will be held on the bayonets of the interventionists - and this is understood in the Republika Srpska. Its head, Milorad Dodik, stated that the Serbs would not tolerate any foreign intervention not provided for by the constitution. The transformation of Bosnia into a satellite of the European Union is clearly not in the hands of the Serbian community, which suffered many oppression during the civil war.

Petr Iskenderov, an employee of the Institute of Slavic Studies, stresses that there was plenty of time to improve the socio-economic situation in Bosnia and Herzegovina. In 20 years, the republic could be turned into a viable state, promoting inter-ethnic and inter-religious dialogue. But the authorities of the country went the other way, and instead tried to suppress Serbian nationalism, thereby setting the Serb community against themselves. As a result, the Serbs are angry at the high-handed "European integrators", and the country, due to the ineptly spent efforts, was on the verge of a precipice.

In addition to ethnic confrontation, in Bosnia there is a risk of spreading the ideas of radical Islam. But this is not an internal, but an external factor: the Bosnian Muslim mentality is different from the Arab mentality, so it will take a lot of time and money to turn Bosnians into warriors of Allah.

The interfaith conflict in Bosnia is local in nature and is not related to the global confrontation between Islam and other religions. However, if the sponsors of the world jihad want, they will be able to connect Bosnia to this universal struggle. Such actions can also be regarded as an intervention, but not from Europe.

As a result, the future of Bosnia and Herzegovina remains unclear. The last 20 years have passed in vain, and during this time the country has not created a working economic system and an effective administrative apparatus. Another wave of violence, and the country will at best be on the verge of disintegration and “divorce”, at worst - before the threat of civil war.

Ctrl Enter
Noticed oshЫbku Highlight text and press. Ctrl + Enter
We are
Armored vehicles of Yugoslavia. Part of 6. Wars in the ruins. Bosnia and Herzegovina. Kosovo. Macedonia20 years after the war in Bosnia 1992-1995: rare photos of the conflict
Military Reviewin Yandex News
Military Reviewin Google News
48 comments
Information
Dear reader, to leave comments on the publication, you must sign in.