Massacre in the Syrian village of Ma'an 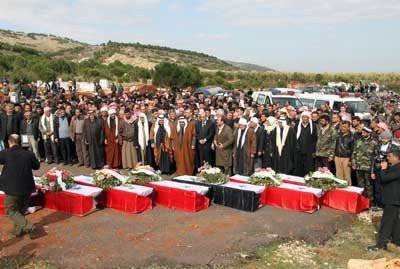 The terrible details of the attack of bandits on the peaceful village of Ma'an in the Syrian province of Hama 9 February are becoming known. Militants from the Islamist groups Jund Al-Aqsa and Dzhebhat An-Nusra brutally murdered dozens of people. According to the Lebanese television channel Al-Mayadin, the victims of the massacre were at least 50 people, of whom 20 are people's warriors, 10 are women, 4 is disabled, the rest are children and old people. Cut out with whole families. The bodies of the dead were desecrated. In addition, the raiders looted and set fire to many houses of the peaceful village. Many residents miraculously escaped, having managed to leave their homes at the last moment ...


It would seem that those fertile places of Syria - not far from Hama and Masjaf - were created for a happy life and peaceful work. Low mountains covered with dense forests, green valleys, fertile land, olive groves, modest white houses among flowering gardens ... But in this hitherto peaceful region, those who barbarously shed blood, sowed death, conflagration and devastation. The village was subjected to a monstrous massacre only for the fact that people belonging to Alawite families live in it. On one of the videos that the gangsters posted, one can see how one of the murderers raises the black flag of al-Qaida on the communications tower in the village.

The bodies were taken to the morgue of the Masyaf National Hospital, and on February 11, funerals were held for some of the victims of the massacre. They found their last refuge in the village of Al-Mahrus. Speaking at the mourning ceremony, the governor of the province of Hama Gassan Khalaf (who replaced his predecessor who was recently murdered by terrorists) said: “The brutality of this crime is proof of the complete moral fall of the terrorists and the obscurantism of their dark ideology.” He added that the blood of the fallen was not shed in vain - their death would inspire the heroic struggle against terrorism.

The Syrian government strongly condemned this terrible crime. Prime Minister Waile Al-Khalki stressed that the responsibility for the massacre lies with the patrons and sponsors of the terrorists, in particular, in Saudi Arabia, Qatar, Turkey, France and the United States. He called on the world to put pressure on these countries, which continue to support criminals, and proposed the creation of an international alliance against terrorism.

ATS public organizations also condemned the massacre perpetrated by terrorists. The general union of the peasants of Syria in his statement expressed the hope that the Syrian army would not leave the atrocity unpunished. The Arab socialist movement accused the UN and other international organizations of inaction against terrorists, which encourages them to commit even more crimes.

The Syrian Foreign Ministry sent appeals to the UN Secretary General and to the UN Security Council, which told about the atrocity in the village of Ma'an. "Full responsibility for the spread of terror in the world arena, in particular in the Middle East, lies with a number of states in the region and the world that arm and finance militants," the foreign office said.

This issue was raised at the negotiations held in Geneva between delegations of the SAR government and the "opposition coalition".
The Syrian delegation at the beginning of the meeting called for a minute of silence in memory of those who fell in Ma'an, as well as all the other Syrians who were victims of the terrorist war unleashed against Syria.

Members of the “opposition” delegation, in order not to be completely disgraced, had to agree. But they did not feel any grief for the fallen, which was shown by the “oppositionist” Munzer Akbik. He declared that ... in the village of Ma'an "not a single civilian was killed." “All those killed in that battle are armed men, military ... We have eyewitness accounts that were there, and they confirm that it was only a battle, and not a single civilian was killed,” Akbik said cynically.

However, even the so-called “Syrian Center for Monitoring Human Rights” (OSDH), based in London and closely associated with the “opposition,” reported that Islamist militants killed more than 20 civilians.

In addition, Akbik not only lies. Denying the death of civilians, he claims that all those killed were armed (including women and children?) And justified the massacre of them. It turns out that the "opposition" delegation fully justifies the murder of the combatants - the defenders of the village, on the grounds that they were armed. Yes, among the dead were members of the self-defense detachments. They are 20 from more than 50 fallen. But they defended their land, their homes, their families. According to this “freedom fighter”, it turns out that the “coalition” considers the very fact of an attack on a peaceful village, whose residents are guilty only of belonging to another faith, to be absolutely normal.

Russian Foreign Ministry spokesman Alexander Lukashevich said: "The actions of the irreconcilable opposition, carrying out terrorist acts and other crimes against the civilian population in Syria, must be strongly and unconditionally condemned by all members of the international community and participants in the inter-Syrian negotiation process in Geneva."

In words, UN Secretary-General Ban Ki-moon condemned the massacre through the mouth of his representative Martin Nesirka.

At a press conference, Nesirky noted that Ban Ki-moon strongly condemns all forms of violence against civilians and calls to bring to justice those responsible for this massacre and all other crimes in Syria. These violent incidents should serve as a reminder of the urgent need to end the conflict and start political change.

However, these words of Ban Ki-moon contrast with his practical activities. In particular, the UN Secretary General under US pressure at the last moment withdrew an invitation to the Geneva Conference sent to Iran, which dealt a severe blow to the political process. Thus, Ban Ki-moon demonstrated that he was an obedient tool in the hands of Washington.

As for Washington itself, it continues to carry out plans that are far from a peaceful settlement.

At a joint press conference with French President Hollande, held at the White House, Barack Obama said that he "reserves the right to a military strike against Syria." I would like to know - who can give it a similar right if the UN Charter directly prohibits interference in the affairs of other states?

However, Obama immediately made a reservation: "The Syrian issue can only be finally settled by political means."

The question is - then why make deliberately wrongful speeches about a military strike, putting yourself in the position of an international gangster? The answer is simple. This is evident - attempts to exert pressure on the Syrian delegation during the negotiations in Geneva.

In addition, Obama attacked Russia: “The Syrian authorities must fulfill their commitments, and the responsibility for ensuring these commitments lies with Russia. Kerry’s Secretary of State has repeatedly conveyed our message to the Russian side that everything has not yet been done and Russia cannot consider its contribution to be full while people in Syria are starving. ”

And this is despite all the recent events in the city of Homs, where the Syrian authorities have done everything to evacuate people from the areas of the Old City, blocked by the militants, and to deliver humanitarian aid there, despite shelling by terrorists!

If Obama is so concerned about “starving people” - why not send him the money that goes to help the “opposition”? weapons, - food for the hungry? But the USA always had billions and even trillions of dollars on bombs, rockets and fighters that destroyed peaceful cities, but there wasn’t a cent to help the hungry!

At this time, the United States and its NATO allies, represented in the UN Security Council, are trying to push through the draft resolution under the specious name — about the humanitarian situation in Syria. Its essence is the introduction of sanctions against those who will impede the delivery of humanitarian aid.

But, as practice has shown, the United States and the West will never accuse the militants of the “opposition”, even if they are deliberately guilty of using chemical weapons and shelling humanitarian convoys. Therefore, this project is intended only to subsequently accuse the Syrian government of a difficult humanitarian situation and, ostensibly on legal grounds, to impose sanctions.

According to Deputy Minister of Foreign Affairs of the Russian Federation Gennady Gatilov, the draft resolution is politicized: “Its whole meaning and purpose is to create a basis for subsequent forceful actions against the Syrian government in the event of non-compliance with any demands laid down there. This is very easy to do, because the humanitarian situation is very complicated. In the form in which it is being prepared, it is unacceptable for us, and we, of course, will not miss it. ”

Russia's permanent representative to the UN, Vitaly Churkin, also condemned this draft resolution, stressing that it undermines the efforts of the international community in the humanitarian sphere. He expressed confidence that the project, which contains threats, will not be accepted.

Right during the Geneva talks, the United States then decides to increase the armament of the "opposition", then, through the mouth of Barack Obama, again speak of a military strike, then they prepare a deliberately anti-Syrian resolution, hiding behind the interests of "hungry people" and preparing for new false accusations against the ATS leadership. But at the same time, the American leadership is completely unwilling to draw attention to real blood - the innocent blood of residents of the village of Ma'an in the province of Hama, who died from the barbaric hands of terrorists.

Ctrl Enter
Noticed oshЫbku Highlight text and press. Ctrl + Enter
We are
Front lines in the Syrian conflict as contours of the future world orderCity of Sea, Gardens and Persistence
Military Reviewin Yandex News
Military Reviewin Google News
17 comments
Information
Dear reader, to leave comments on the publication, you must sign in.