The problem of the North Caucasus: its solutions

March 31 2011
5
The collegium of the Accounts Chamber of the Russian Federation heard the preliminary results of the next inspection in the North Caucasus. The figures cite the scale of the problem for themselves: “In the budgets of Chechnya and Ingushetia, the share of subsidies from the federal treasury is about 90%, in Dagestan - 75%, in the CBD - 60%, in CO-Alania and the KCR - 55%.

The share of intergovernmental transfers per capita in the North Caucasus (with the exception of Stavropol) is almost twice as high as the average Russian level. Last year, the federal center allocated to every resident of Chechnya, according to official data only, 41 000 rubles, Ingushetia 20 000, Dagestan 17 000, Kabardino-Balkaria 13 000. For Stavropol this indicator modestly fluctuates around the 6000 rub.

This year, the 6 republics of the North Caucasus Federal District will receive in the form of gratuitous transfers 129 billion rubles. Of these, 52 billion will go to Chechnya, 42 billion to Dagestan, 11,5 billion to Kabardino-Balkaria.

At the same time, in the same Chechnya, according to the government of the republic, no more than 40% of utility bills are collected, in Dagestan - 50% ”.

All this abundance of money led to the fact that “last year unemployment in the North Caucasus amounted to 17% (with the average for Russia 8%); it's almost a 400 000 man. In Chechnya, 43% of the economically active population does not officially work, in Ingushetia, all 52%. The average age of the unemployed in the Caucasian republics ranges from 22 to 25 years (for comparison, in the whole country it is 34-35 years).

In all key indicators (GRP per capita, labor productivity, budget security, level of development of the real sector of the economy), the republic lags significantly behind other RF subjects. The main contribution (17%) to the total volume of GRP is made by the public administration sector and the social services sector (in the country this figure is not higher than 11%). Republics continue to lead the country in the number of officials per capita. For example, in Karachay-Cherkessia, every sixth resident is in the civil service. In Chechnya, more than half of the enterprises are unprofitable, in Ingushetia such 45%. In Chechnya, officially the lowest salary of officials among all regions of the country (less than 10 000 rubles.), Which indicates that they work on kickbacks.

Moreover, as the Accounts Chamber especially notes, over the past two years (i.e., during the period of economic crisis), investments in fixed assets in the republics have noticeably decreased. According to the auditors, this indicates that the federal budget has already reached the limit of possibilities for supporting the regions of the North Caucasus Federal District. ” 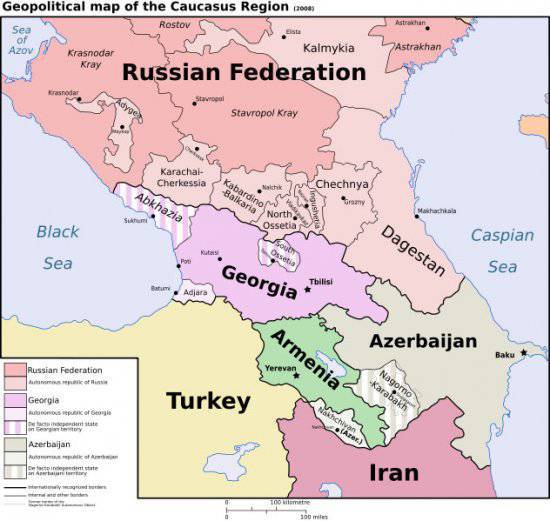 There are actually two options: first, to separate the North Caucasus from other territories of Russia.

This path is offered by liberal circles and part of the radical Russian nationalists. They say that it’s enough to “feed” this region, it’s time to get rid of the “colonial inheritance”, we are no longer an empire, we don’t need to drag the North Caucasus to “our hump”. The fact that freedom was given to the South Caucasus - Georgia, Armenia, Azerbaijan - is the first step. You also need to get rid of the North Caucasian republics.

The most radical offer to separate the "wall" (as the United States from Mexico, or Greece is building a wall at the border to protect against migrants from Asia and Africa), to block all approaches with minefields and other obstacles.

But this option is almost guaranteed to lead to the collapse of the entire RF:

- Will cause a sharp activization of nationalists of all stripes (Bashkir, Tatar, Buryat, Yakut, all kinds of "Cossack troops", "Siberians", "Urals", etc.

- A huge wave of migrants - hundreds of thousands of Russians live in the North Caucasus, almost all of them will become refugees, otherwise death and slavery (we remember the Chechnya of the 90's). Yes, and so they will lose almost all the property, some will perish in the confusion, "disappear", fall into the hands of traffickers. This will cause a sharp socio-economic crisis.

- A significant part of the “titular nations” will follow the Russian population (there is no need to go far after the example - more Armenians, Georgians, Azeris live in the Russian Federation and temporarily than in these states), these will be peaceful people who do not want to stay under baiys, khans, princes ”and other feudal lords, and the criminal element will follow the“ breadwinner ”.

- A sharp surge in crime situation.

- The war in the North and South Caucasus: if the Russian Federation completely withdraws from the Caucasus, Azerbaijan will surely strike over Nagorno-Karabakh, the second Armenian-Azerbaijani war will begin; Georgia will certainly move troops to Abkhazia and South Ossetia. Ingushs will clash with the Ossetians, the Chechens will come to the aid of the Ingush, the Ossetians will face the threat of complete excision. Chechens in alliance with the Ingush will start a war for the creation of a "Caucasian Federation", most likely they will prevail, since they have vast experience in waging war and better armament than neighbors.

This will cause a new wave of refugees in the Russian regions. After the victory in Grozny, the question will be how to live further - there is little oil, they will not be able to create a competitive economy, and most importantly, they don’t want to - eventually they will return to the craft of their great-grandfathers; ransom, on organs (example of Kosovo Albanians), pumping money out of the Russian Federation through ethno-criminal groups — prostitution, drugs (perhaps, following the example of Afghanistan, they will start producing drugs — this is profitable), the market weapons.

A direct invasion is also possible in order to capture a part of the Russian Federation - Stavropol, Krasnodar Territory.

- Moscow will betray all the great work on the pacification of the Caucasus, which was done by our ancestors in the Russian Empire, in the USSR. With this step, with a very high probability, Moscow will destroy the whole of Russia. Yes, the “wall” of this problem does not close, an example of the same China with the “Great Wall of China”; The United States says that the “walls” of problems of this level do not solve.

For this option, Moscow must begin to Russify the whole of Russia, following the example of the Russian Empire. The Russian people should become the full-fledged master of their own land, Russia.

- All national formations should be eliminated, there should be only oblasts: for example, the Chechen Republic - the Grozny Oblast.

- Only Russian (Belarusians, Germans and other peoples who have already emerged from the primitive communal stage of development) should be the top managers. Naturally, they must bear the highest responsibility for their work: if there is a fact of corruption and other violations of the law - 10-20 years of strict regime with confiscation of property from all relatives and the inner circle (friends, mistresses), if they do not prove that everything was bought honest by, on the salary.

- The total destruction of all ethno-mafias on the territory of the Russian Federation, it is possible and physical, that is, in "not to take prisoner."

- The elimination of ethnocratic regimes, all under the Criminal Code, almost all "article crying."

- A large-scale program for the development of the North Caucasus, the reconstruction of industry and agriculture, the tourism system, health centers for free recreation for children, the elderly, officers, doctors, teachers with families. This will interrupt the vicious practice of recreation for the Russian people in Turkey and a number of other states, which leads to wasting not replenishable resources (every ruble, dollar, euro is wood, oil, gas, gold, iron, diamonds, etc., i.e. non-recoverable resources) and the maintenance of these states at the expense of our resources and energy.

- The introduction of the principle of "who does not work, he does not eat" - the abolition of all social programs and benefits in relation to idlers. The abolition of subsidies from the Center, Russia should not contain the Caucasus, it should earn a living. The destructive practice of the USSR, when the Russian regions contained suburbs, must die.

- The program of returning to the North Caucasus, and indeed to the South, of all migrants who do not have work that benefits Russia. With illegal entry into the territory of Russia - 5 years of strict regime (in the correctional system to introduce the principle of self-sufficiency and profitability, use the positive experience of L. P. Beria). The introduction of "Pale", a pass to Russia only if necessary (invitation to work now), an invitation to visit, a tourist trip.

- Creation of a special commission to investigate crimes in the territory of Chechnya and other republics in 90, 2000, punishment of all criminals in the framework of the Criminal Code. The Chechen people, apparently, should be evicted in the sparsely populated areas of the Russian North or Siberia, they should be punished for their crimes.

- To restore the Terek Cossack army as part of the Armed Forces of the Russian Federation, according to the system of mountain rifle brigades - 2-3 brigades. It will be a stronghold of stability in the North Caucasus.

- To disarm all Caucasians.

- Carry out an operation to free slaves, all slave traders and slave owners - on a strict regime for 15-20 years.

When resisting to act as tough as possible, any attempt to resist to crush mercilessly, the primitive communal system of the psyche accepts only force. After that, other nations will faithfully serve Great Russia.