February 13 2014
7
In late January, the US Army Department published a preliminary list of requirements for a promising vehicle, which should be developed as part of the Ultra-Light Combat Vehicle (ULCV) program. The new vehicle in the future will ensure the mobility of infantry units. The development of the program will go within the framework of the concept of updating the US Forces Force 2025.


For a prospective vehicle for the infantry units of the future, several basic requirements are imposed regarding its various characteristics. The design of the ULCV machine should be created taking into account the following requirements:
- The machine must transport an infantry unit of nine people with weapons and the necessary equipment. Machine carrying capacity should exceed 3200 pounds (about 1450 kg);
- The basic level of protection of a promising vehicle should be provided with high mobility and individual means of protection of fighters;
- The design of the ULCV machine must have high strength characteristics to withstand various loads. In particular, it stipulates the preservation of structural integrity in the event of overturning;
- The machine must be adapted to travel, not only on highways, but also on rough terrain. The range on a single refueling is set at 250-300 miles (400-480 km);
- On a promising car should be installed weapon platoon level or heavier weapons. Primarily considered shooting systems;
- Dimensions and equipped weight of the new equipment should allow it to be transported by various planes and helicopters. The ULCV should be placed in the cargo cabin of the CH-47 Chinook helicopter and mounted on the external suspension of the UH-60 helicopter. In addition, it is required to ensure the possibility of landing from military transport aircraft using the 463L platform;
- New technology should have a modular architecture that simplifies operation and repair in field conditions. 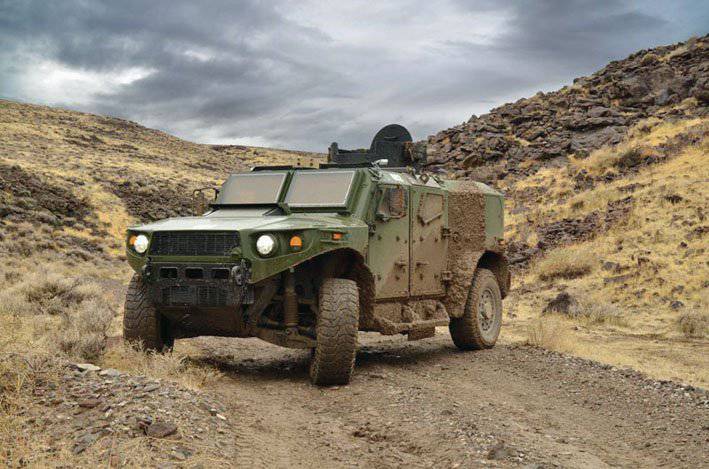 An experimental lightweight ULV demonstrator (second prototype) developed by the TARDEC of the US Army. The concept of this project formed the basis of the ULCV promising light vehicle (c) US Army / TARDEC (via Jane's) program implemented at TARDEC.

The implementation of the ULCV program is the organization TARDEC (Tank Automotive Research, Development and Engineering Center - "Armored Research, Design and Engineering Center"). Available information on the requirements for a promising machine for infantry units allows us to roughly represent its appearance. At the same time, there is reason to believe that the ULCV car will become a simplified and lightweight version of the experimental vehicle created during the Ultra Light Vehicle (ULV) program.

This year’s 2014 is expected to roll out all work on the ULV project and focus on developing a new ULCV machine. The goal of the ULV program was to create an experimental vehicle for infantry. A four-wheel-drive vehicle with a total mass of about 14 thousand pounds (about 6350 kg) was supposed to carry up to 4500 pounds (2 tons) of cargo. Three experimental machines ULV received a hybrid power plant based on diesel and electric engines, as well as a set of reservations, characteristic of machines class MRAP. Finally, within the framework of the ULV program, the possibility of creating a vehicle for infantry, the cost of which will not exceed 250 thousand dollars during the construction of a series of more than 5000 units, was studied.

The TARDEC Center together with several US defense companies built three prototype ULV machines and conducted their tests. During the test runs on the landfill, the cars showed fairly high performance, and also made it possible to identify the shortcomings. Appreciation received hybrid power plant machines. The system of one diesel and two electric motors made it possible to achieve high driving characteristics, and also provided the necessary level of survivability. Two relatively compact electric motors made it possible to equip the ULV with a bottom of a characteristic “mine-proof” shape without vulnerable areas. In addition, the machine retains its mobility when one of the engines fails. 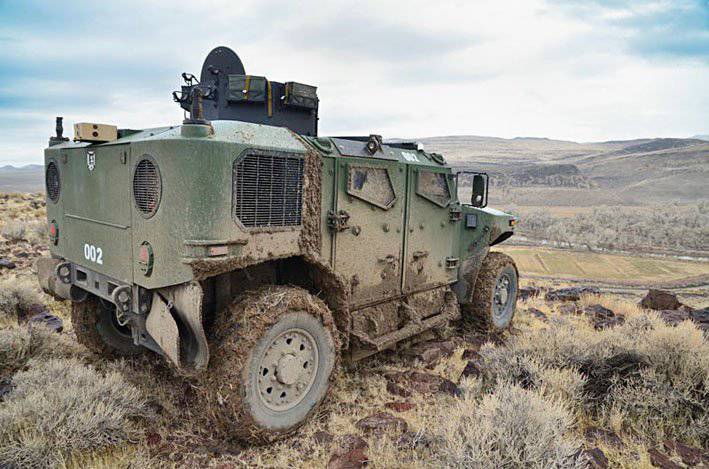 An experimental lightweight ULV demonstrator (second prototype) developed by the TARDEC of the US Army. The concept of this project formed the basis of the ULCV promising light vehicle (c) US Army / TARDEC (via Jane's) program implemented at TARDEC.

Tests of three ULV machines allowed to clarify the requirements for promising technology for this purpose. According to the test results, in January a new version of the requirements for the machine created under the ULCV program was released. It is noted that the approved list of requirements does not yet exist. For some time, developers will have to use the preliminary version of the technical specifications. In the future, requirements will be refined and updated. In the meantime, participants in the ULCV program can identify the main features and features of the appearance of a promising vehicle for infantry units.

The current version of the requirements for the ULCV car suggests that it will be a four-wheeled vehicle with a curb weight of no more than 4,5-5 tons. As a power plant, it appears that the well-proven hybrid system based on diesel and electric motors will again be used. Current protection requirements may indicate that the ULCV will receive the lowest possible booking. At the same time, the possibility of equipping the machine with additional booking modules cannot be ruled out.

In the context of booking, it is worthwhile to consider mine protection separately. In recent years, the most striking trend in the development of US military vehicles has been the creation of MRAP-class vehicles. Based on the experience gained by the army in local wars of recent years, the American defense industry in a short time created a relatively large number of armored vehicles capable of protecting the crew from both bullets and enemy explosive devices. As already mentioned, the experimental machines ULV also equipped with a reservation and the bottom of a V-shaped. In the case of the ULCV project, mine action elements may not be used in the construction of a prospective machine. It is worth noting that, against the background of some recent events, the equipment of the MRAP class has partially lost its relevance. Perhaps it is for this reason that the current requirements for the ULCV machine do not imply serious basic protection.

The main features of the appearance of a promising vehicle for US infantry units are now clear. However, during the next time, when the ULCV program enters the technical design and prototype construction stages, the requirements are subject to change. Additional adjustments can be made on the test results. In the meantime, a promising program is the subject of numerous disputes. Doubts are subject to several requirements of the Pentagon. Experts and fans of military equipment point out ambiguous prospects for the use of a hybrid power plant, as well as dissatisfied with the level of protection set by the current version of the technical specifications.

Available information about the ULCV program suggests that new progress messages may appear in the very near future. TARDEC Center and related organizations have some experience in creating "ultra-light vehicles" and are already conducting design work on a new project. Thus, the demonstration of the first prototype of a promising vehicle for infantry units may take place in the foreseeable future. The first demonstration of the experimental car will allow to remove some questions about its characteristics and possibilities, and also will become a new cause for disputes.