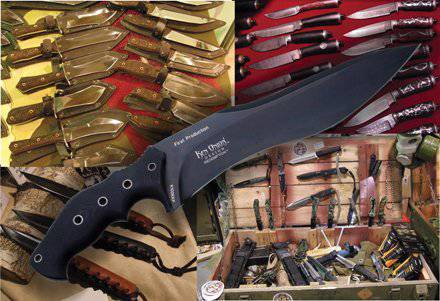 Alles (from him. "Alles fur Deutschland" - "Everything for Germany") - dagger of the assault detachments of fascist Germany

Assist (from the English. Assist - help, support) - spring device to facilitate opening of the blade in semi-automatic knives

Outdoor (from the English. Outdoor - off-road) - intended for use outside urban conditions

Batoning (from English batoning - strike with a baton) - splitting a log with a knife, by striking its butt with another object (log, stone, etc.).

Bock / Becker - the knife and the company «Boker» (Germany).

Wave / Wave (from the English. Wave Emmerson Opener) - a device in the form of a protrusion - a hook on the blade butt for automatic opening of a folding knife when taking out a pocket

Vintage (from French. Vintage) - an old knife or a knife in the old style

Vodnik - abrasive stone for sharpening, which requires prior soaking in water

The Survivor is a survival knife.

Abortion - a folding knife, the blade of which automatically opens ("throws out") after removing it from the retainer.

Hole - round or oval cut in the blade for the thumb, used to open the knife with one hand

EDC (from the English. EDC - Every Day Carring) - a knife everyday wear

Painting - a large knife of an aggressive, frightening look

Custom (from the English. Custom) author's knives, knives made to order in a single copy or in small batches

Customized - modified serial knife to improve its characteristics or to give individuality (blade engraving, curly notches on the butt, new linings or handles, etc.)

Kersh / Kershaw / Kershaw are the knives of the Kershaw trademark of Kai USA Ltd.

The Chinese are low-quality Chinese knives.

The Chinese are good-quality knives made in China.

Kishkoder - knife with shock teeth on the blade

Knotter - semi-automatic folding knife with a button to open it

Kovanina - traces of forging on the blade or their imitation

Crutches / Tools - tools for making or maintaining a knife

Kotska - traces of intensive use of a knife (scratches, dents, nicks, chips, etc.).

Credit card / card knife (from the English. Credit card knife) - a knife in the form of a credit plastic card to carry in your wallet

The laser is a very sharp knife with a thin butt.

Lomik / scrap - a knife with a thick butt

Burdock - plastic sheath without fasteners (the knife is fixed on the body or clothing with a cord, threaded through the holes in the sheath)

Lyonka - linseed oil used to impregnate the handle of the knife

Maniclip (from the English. Money clip) - a small pocket with a clip, used as a clip for paper bills

Mint - a knife in excellent condition with no traces of use

Carrots / carrots - a knife with an orange handle

Cartoon / cartoon (from multitool) - a multifunctional knife, which includes in addition to the blade various tools and accessories

Napiling - completion of the new knife

Oversized / oversized - a knife of complex shape and large size

The knife bit - easy cut with a knife

Abrasion - technological operation to give the blade its original shape

Palma - a knife on a long handle

Die - plates that form the frame of a folding knife, usually made of metal

Float - a knife with a hollow handle or a handle of balsa wood, foamed plastic that does not sink in water

Powders - steel, made by powder technology.

Birdhouse - a model of the knife "Catbyrd", produced under the brand "Byrd" by the company "Spyderco"

Pushkat (from the English. Push cut) - cut without moving the blade - only due to the pressure on the knife

Roundhall (from the English. Round Hole) - a round hole in the blade of a folding knife for opening it with a thumb (patented by the American
by Spyderco)

RK - the cutting edge of the blade

RRZh (various rusty iron) - knives with a blade from damask of low quality.

Remba is an incompetent participant of knife forums with great conceit, a lover of large knives of aggressive design.

Satin / satin finish - matting the surface of the blade

Skulkracer (from the English. Skullcrasher - destructive skull) - shock protrusion in the top of the knife

Slip-on / Slip-joint (from the English. Slip-joint) - a folding knife without rigid fixation of the blade (spring-loaded blade heel), typical pocket knives of the Soviet period

Suvel - growth on the trunk of a tree, used to make the arms of knives

Ten - a model of a knife "Tenacious" of the Spyderco company

Triangle - a device for sharpening "TriAngle", manufactured by "Spyderco"

Blunt - the heel of the blade

The pin is a knife with a handle located perpendicular to the blade, a knife of a knuckle grip

Horror / Uzhosna - a knife of aggressive look and huge size

Fixed - (from the English. Fixed blade knives - a knife with a fixed blade) - awkward knife

Feature (from the English. Feature) - a characteristic property of a knife

Freehand (from the English. Free hand) - sharpening the knife by hand without the use of additional tools

Hotelka - an unstoppable force to acquire knives from the Nyfoman

Khokhloma - drawing, applied to the blade by engraving

The neck is a small knife for carrying around the neck.

Pike - blade with a concave descent of the blade

Apple - pommel in the form of a ball