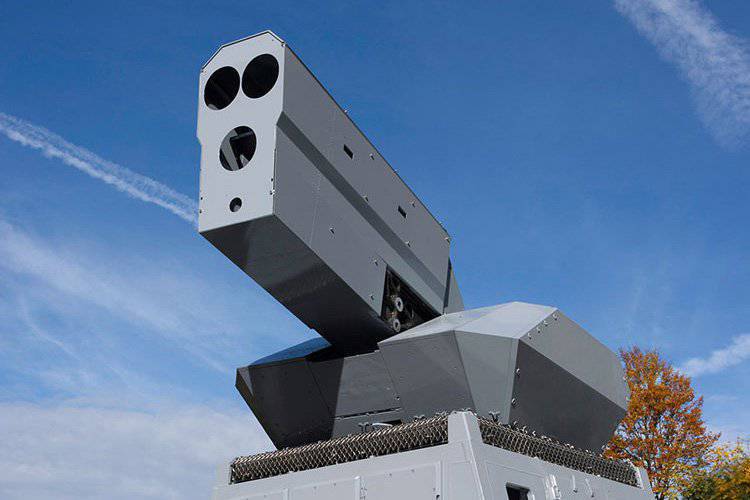 Recently, Rheinmetall demonstrated a technological prototype of a high-power next-generation laser at its test site in Switzerland. The development of such systems, which is taking leaps and bounds, can significantly change future combat capabilities.

Rheinmetall demonstrated its achievements in HEL technology (high-energy laser) at the Oxenboden artillery range in Switzerland at the end of October 2013. Tests included “shelling” of mobile and stationary HEL prototypes of several vertical take-off UAVs, as well as targets in the form of artillery shells, mortar ammunition and unguided missiles (RAM – rocket, artillery and mortar). The effectiveness of the new system was tested not only in the fight against RAM, but also in the scenarios of fighting improvised explosive devices (IEDs) and unexploded ordnance, as well as in air defense scenarios.

“It was still too early then,” said Fabian Oxner, vice president of marketing at Rheinmetall Air Defense for marketing. "During operations in Iraq and Afghanistan, this technology was not yet ready for deployment."

Threats and opportunities
Despite the fact that the ground-based version of the Phalanx short-range shipboard complex with C-RAM capabilities (interception of unguided missiles, artillery shells and mines) was deployed among the troops, the US Army closed this program. However, Rheinmetall decided to develop the HEL technology for the requirements of C-RAM and ground-based air defense systems (GBAD), based on analytical reports obtained in its early studies.

Mr. Oxner mentioned the Australian study of GBAD's capabilities from 2008 of the year, which identifies various threat scenarios, the most difficult of which is to protect an airfield located deep in its territory from various types of air attacks, including UAVs. In addition, the NATO study 2012 of the year (NIAG SG-170), which is yet to be published, described in detail the “destruction of slow and low-flying small GBAD airborne threats” and emphasized the threat of the UAV, based on the analysis of a set of scenarios, including terrorist attacks.

In 2010, Rheinmetall installed a HEL prototype with an 5 kW power to the Mantis C-RAM platform, then 2011 produced a 10-kW laser technology demonstrator consisting of two 5-kW laser modules in a Skyshield turret connected to a Skyguard XNUM sensor unit.

In 2012, two more technological prototypes were made with the power of 20 kW and 30 kW beams. Accordingly, five high-power 10 kW lasers provided the total power of these two 50 kW units. In a series of tests carried out at the end of the same year, the demo successfully cut a steel beam 15 mm thick at a distance of 1 km, successfully detected, tracked and destroyed a UAV at a distance of 2 km, and also destroyed a steel ball with a diameter of 82 mm (mortar shell imitation) flying at a speed of 50 m / s.

In the 5-kW laser category, the Mobile HEL Effector Track V on the BTR M113 demonstrated its capabilities in the fight against ground targets. The laser machine destroyed unexploded ordnance and burned mines and IEDs from a safe distance within a couple of seconds, and also removed barriers from the barbed wire at 70 meters distance.

The Mobile HEL Effector Wheel XX on the Boxer 8x8 car demonstrated the neutralization of a large-caliber machine gun on a truck chassis, initiating the undermining of the cartridge in a machine-gun belt without risk to the shooter. The installation also demonstrated its ability to destroy a vertical takeoff UAV.

The ability to destroy the infrastructure from a distance of 2 km was demonstrated by the third “participant” - Mobile HEL Effector Container L. The radar was de-energized due to cutting the power cable with a laser installation, and then the radar mast itself was cut off within a few seconds. The system also successfully detected and tracked optical devices, such as rifle sights and remotely controlled cameras, which were then neutralized or destroyed. 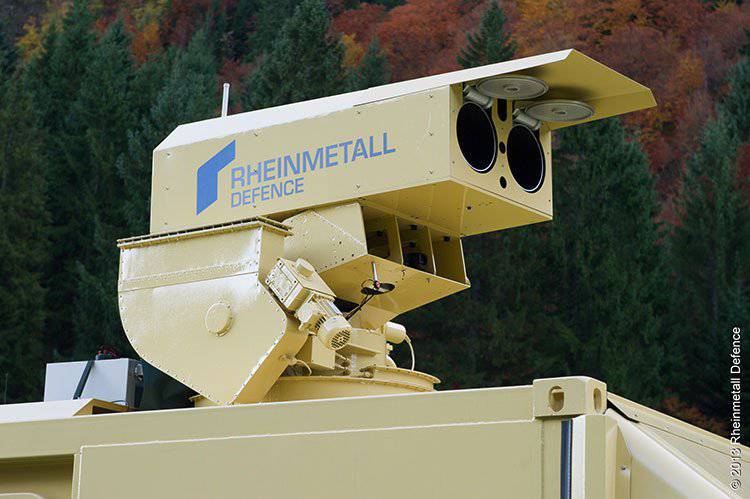 Other advantages of the system are “low cost per lesion” and unlimited number of laser inclusions. The company also said that the HEL demonstrator can work in difficult weather conditions, including snow, ice, rain and "blinding" sunlight.

The static demonstration involved a HEL laser with a power of 30 kW (three 10-kW lasers) installed in the MG10 gun turret, also connected to the Skyguard sensor unit. In the C-RAM scenario, the HEL installation destroyed several mortar shots at an increased range of 3 km.

In two demonstration episodes, the system found, identified, traced and destroyed steel balls with a diameter of 82 mm, shot from a pneumatic installation in quick succession, hitting five balls out of five in the first test and four out of five in the second. The 30 kW laser device was able to neutralize the UAV, blinding and destroying its optical-electronic sensors.

In the scenario that reproduces the attack of three UAVs at once, the system demonstrated the complete sequence of defeat. The Skyguard sensor unit detected and identified the UAV, then the installation captured and destroyed targets after performing coarse and precise tracking.

HEL technology is still evolving. “Today we are demonstrating a technological prototype and we need even more time to further develop and qualify it,” said Oxner.

The further development of technology mainly depends on the decision of the German government to purchase this system. In 2011, the Bundeswehr accepted the delivery of two MANTIS C-RAM systems and, in order to increase the efficiency of this system, is exploring the possibilities of installing the HEL system in addition to the guns.

Although the withdrawal of troops from Afghanistan removes urgent requirements for C-RAM, Oksner believes that these requirements can be quickly determined again. The example of Syria only confirms his words. HEL mobile solutions are also suitable for installation on ships, so Rheinmetall will actively participate in the development of laser systems for the naval forces.

Ctrl Enter
Noticed oshЫbku Highlight text and press. Ctrl + Enter
We are
Burning out the target: the development of high-energy lasersNews from IDEX 2015
Military Reviewin Yandex News
Military Reviewin Google News
61 comment
Information
Dear reader, to leave comments on the publication, you must sign in.