February 14 2014
87
The main idea of ​​the author is to work out an alternative layout of a support combat vehicle tanks (hereinafter - BMPT) with a higher level of crew protection than existing BMPT. Spaced reservations, non-standard internal layout of the machine, a changed arrangement of internal equipment and duplication of some components of the machine provide additional protection for the crew when penetrating the main armor.


Two openly positioned 57-mm guns make the car look like “bloated” from 2x30 mm to 2x57 mm “Terminator”, but two C-60 guns, with a distance between them sufficient for the crew to land, turned out as a result of using a special longitudinal armored capsule in the center of a fairly large tower.

The proposed alternative BMPT-100 (drawings and text) is a sketch of the author's work, which does not pretend to any exact technical and tactical conformity. 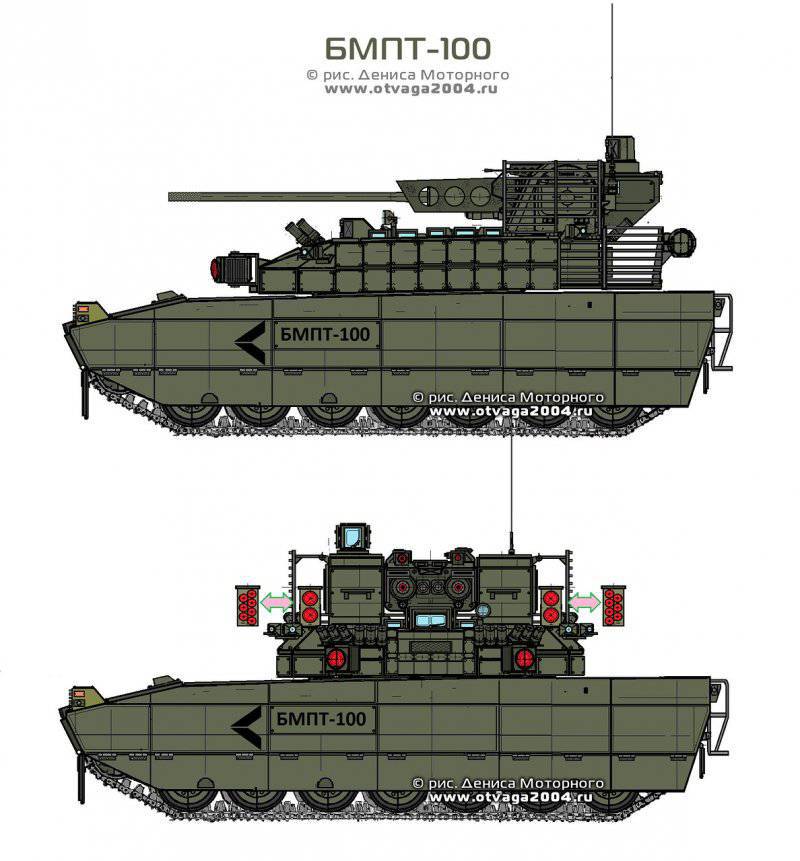 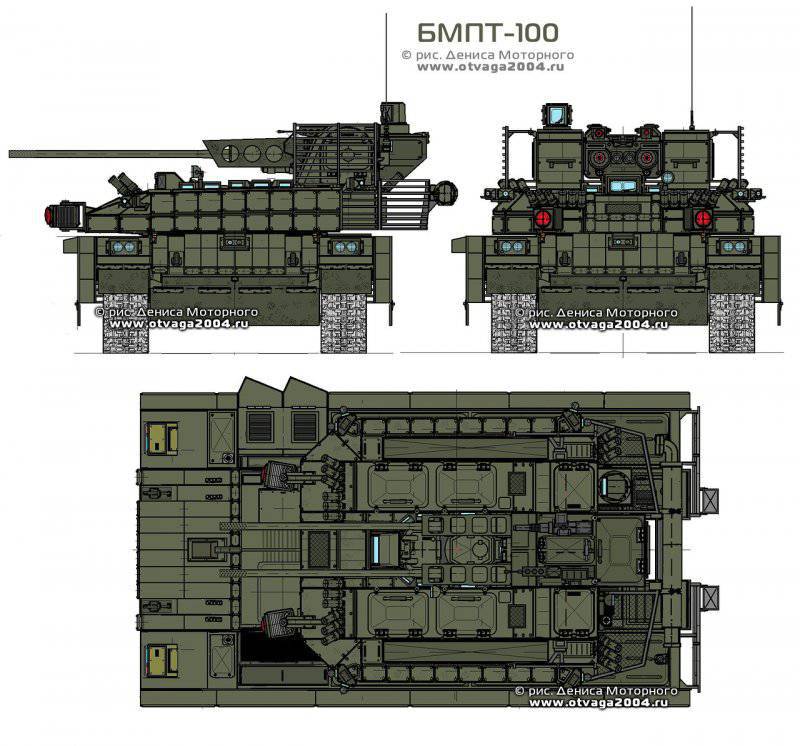 The machine is part of the family of combat vehicles based on the alternative tank T-100-140, in connection with which it is intended to use the chassis of this tank without any special changes. 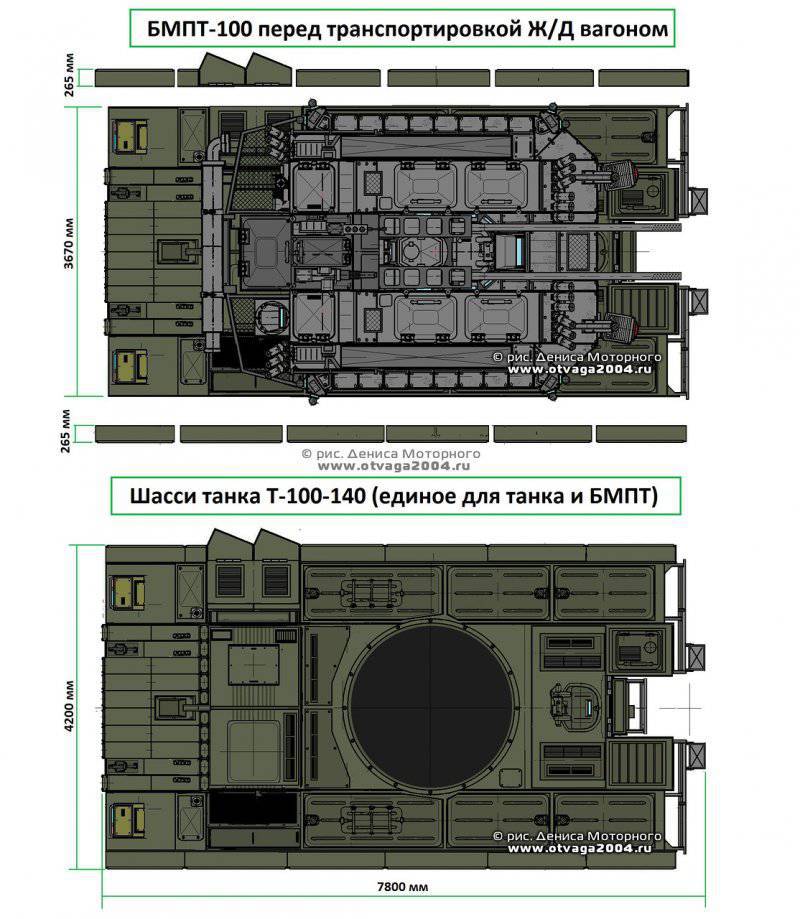 The main feature of the alternative BMPT-100 is the increased security of the crew of 3 people, as a result, the large mass of the machine is 62 tons (equal to the mass of the T-100-140 tank). 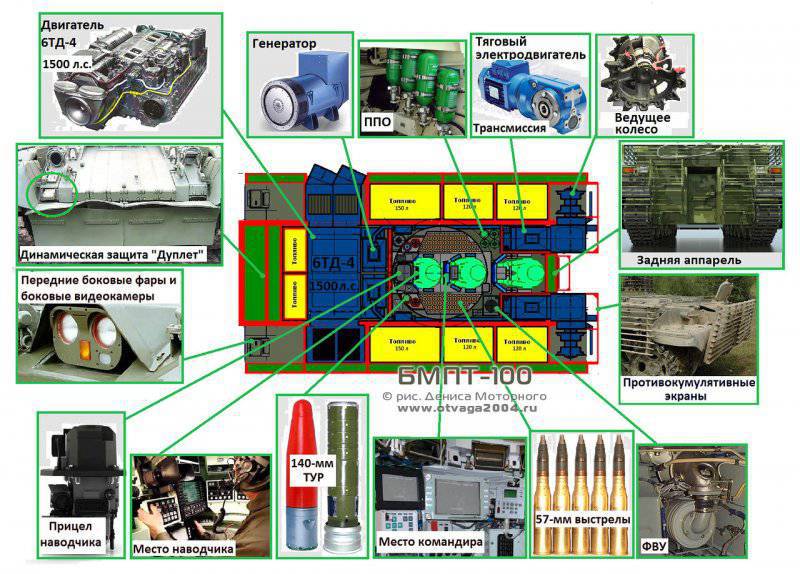 The main armament of the BMPT consists of the armament complex of the well-known ZSU-57-2 - two paired 57 mm C-60 automatic guns.

Such a complex of weapons for BMPT will certainly be controversial, since this is not a ZSU and 2-i gun, its booking and auxiliary mechanisms will only make the car heavier, however, the presence of 2-guns was the result of some non-standard layout and technical solutions:

1) New layout of the crew in the tower "in a helicopter." 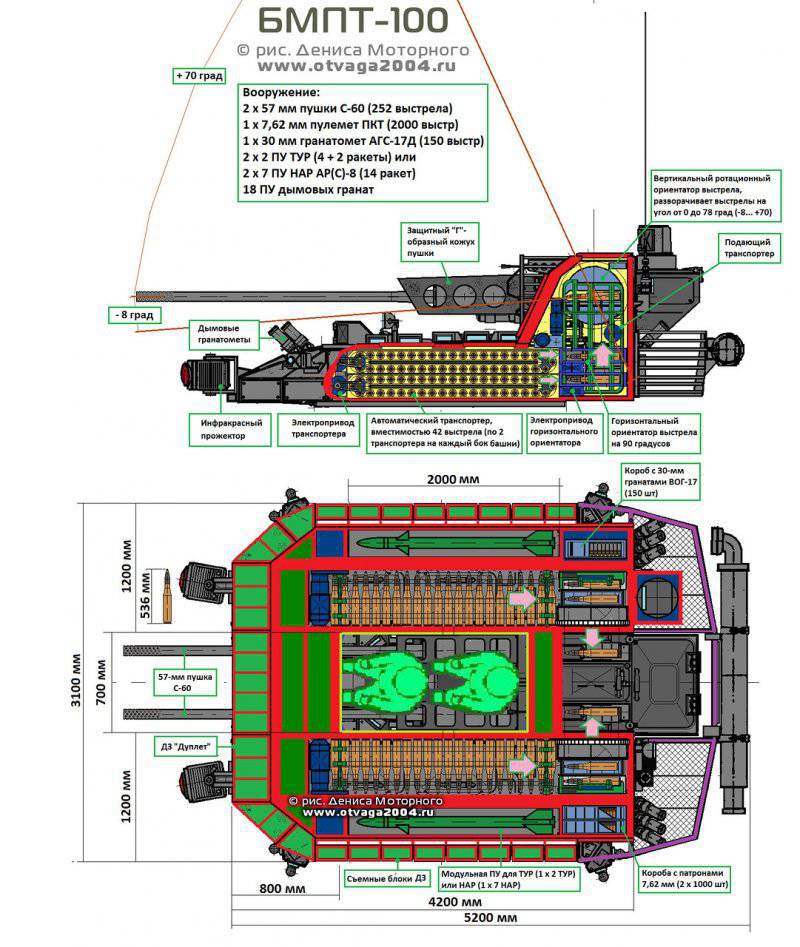 With this arrangement, the crew (the commander sits behind the gunner along the longitudinal axis of the tower) provides increased crew protection from the sides - the size of the armor plates and the ammunition between them, mechanisms and units is: DZ + 1200 mm + undercut. The crew is in a kind of “armored capsule”, which in the front projection is protected by combined spaced armor with the Duplet dynamic protection complex. The size of the armor in the area of ​​the frontal projection of the armored capsule is: DZ + 800 mm + podboy (in the version with additional protection: screen + 600 mm + DZ + 800 mm + podboy). The two upper hatches are also located along the longitudinal axis of the tower, one after the other. Using only one 57-mm cannon along the axis of the tower would limit the possibility of evacuating the crew, since landing / disembarking would be possible only with the gun raised up, in other positions the crew would be clamped by the gun barrel inside the machine. In the proposed model of BMPT, the crew can leave the car at any angles of inclination of the trunks because the distance between them allows the crew to easily climb between the trunks.

2) The design of the automatic ammunition consisting of 4-x independent chain conveyors (2 pairs on each side, the capacity of each conveyor - 42 shot). With this design provides a large capacity of automatic ammunition - 168 shots. Replenishment of the conveyors is possible from the fighting compartment without stopping the operation of the gun (even at the moment of firing). The BMPT commander replenishes the ammunition, to the right and to the left of him on the rotating floor of the fighting compartment there are two manual packs, each with a capacity of 42 shot (full mobile load - a shot of 252). At the moment when the guns are powered by the two upper conveyors, the commander can replenish the two lower conveyors through special hatches in the armored fences, and vice versa, when feeding the guns from the lower conveyors, the upper ones are replenished. The theoretical time to replenish any two transporters (shot 84) - 6-7 minutes. The standard firing mode is a simultaneous salvo from 2's guns.

In the event of failure or destruction of one of the guns or automatic loader - it is possible to fire from one gun.

3) An additional advantage of the two-gun installation is the higher rate of fire of the guns - up to 200 shots / min., Providing additional capabilities in the fight against air targets. With a regular doubles shot (for higher accuracy of shooting due to simultaneous recoil), shells are likely to overrun. This disadvantage is partially compensated by a large payload of ammunition and a small cost of regular 57-mm shots as a consumable. 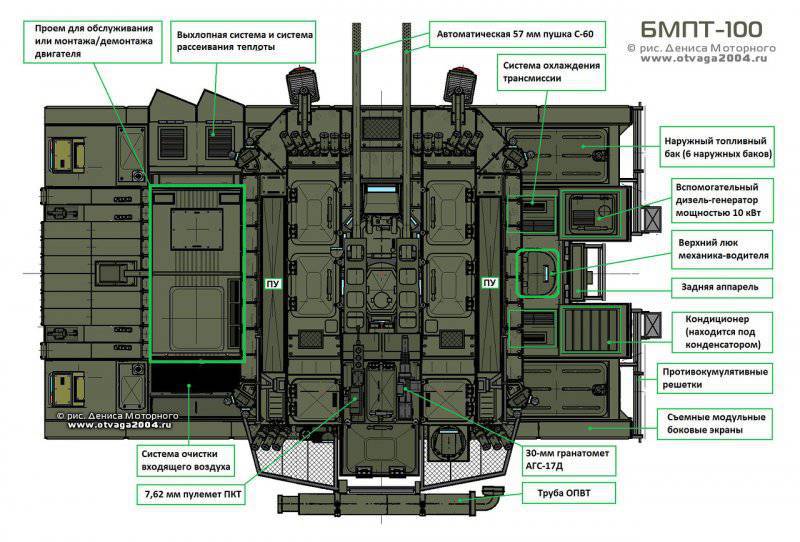 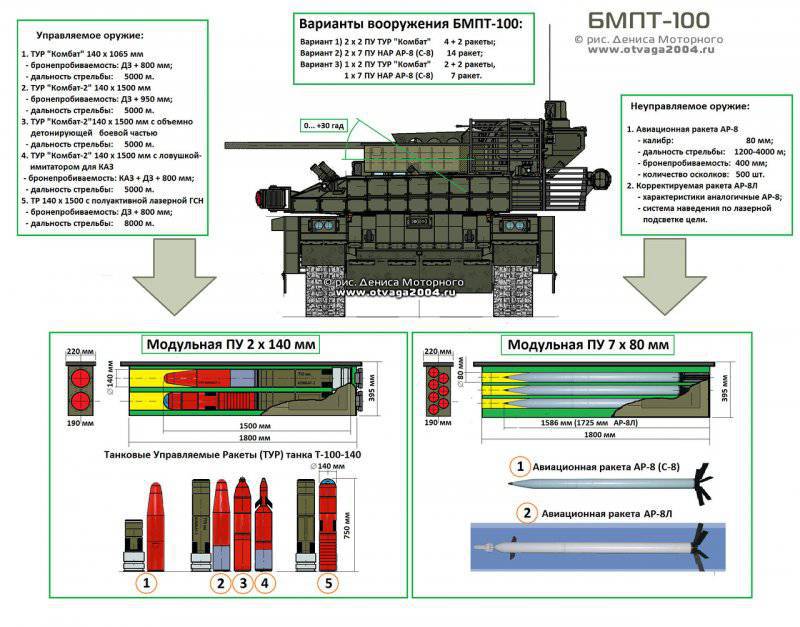 As guided weapons (for maximum unification with the T-100-140 tank), it is proposed to use universal launchers that fire “tank” T-bom “Combat” of various modifications. Structurally, each PU for a TUR has two channels with a diameter of 140 mm with a closed rear section, similar in principle to the treasury of a tank gun (since the missiles are the same). The PU is loaded from the rear, with the installation raised in the 0 degrees position and the lateral anti-cumulative grill folded back to 90 degrees.

If necessary, PUs with TUR can be changed to PUs with aviation missiles AR-8 (C-8). For accurate firing at heavily fortified objects (bunkers, bunkers, and others), the use of AR-8L corrected aircraft missiles is provided. 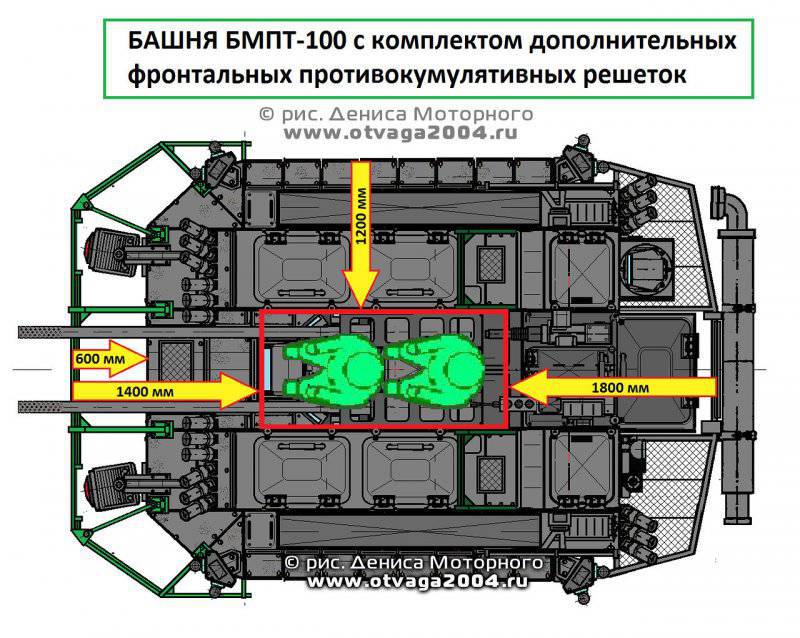 - New layout of the tower, provides increased protection for the crew from the sides and stern;
- The layout of the T-100 chassis provides additional protection for the entire crew when armor is broken through;
- The driver can urgently leave BMPT at any position of the tower;
- The high rate of fire of guns (at the level of ZSU-57-2) increases the firepower of the BMPT, including when fighting combat helicopters;
- 57 caliber mm allows you to use a wide range of shots, including PF projectiles with remote blasting and anti-aircraft guided projectiles with a seeker;
- Possible replenishment of the automatic loader simultaneously with firing from the gun;
- Universal PU, which can use different ATGM caliber 140 mm, used on the T-100-140;
- The upgraded SLA allows targeting the corrected NAR AR-8L.

- Large mass (62 tons) and height (mm 3400);
- The cost of the car is comparable to the cost of a promising tank;
- Only one simultaneously hit target;
- Accurate aimed fire is possible only when shooting 2-x guns at the same time;
- Large frontal projection of BMPT (due to the thighs of guns);
- High line of fire 57 mm guns;
- Sophisticated automatic loader;
- The overrun of shells due to the "pair" shot (compensated by a large ammunition);
- Side exhaust increases the visibility of the car;

- Installation of a promising engine 6TD-5 with power 1800 hp (increase in power density to 29 hp / ton);
- Equipping the tower with a set of removable anti-cumulating grids, providing additional circular protection of the tower against RPG shots;
- A further increase in the size of the combined armor of the tower due to the new modules of armor, because increasing its size does not prevent the mechanic from leaving BMPT through the rear ramp;
- Installation of the standard active protection complex (KAZ);
- Creation of an alternative ZSU based on BMPT-100, firing 57-mm UAS shells and anti-aircraft missiles (presumably, ZSU should be as close as possible to BMPT for the enemy to misinform);
- Integration of the remote control system of the machine (for special operations in the “hottest spots” without threatening the crew’s life), thanks to electrical control systems, video surveillance channels and a rather large automatic loader 57 mm guns (168 shots).
- Installation of promising power units-power units (based on fuel cells), generating electricity for traction motors and on-board network due to chemical reaction of the fuel;
- The use of electromagnetic or electrochemical guns.