February 12 2014
44
On February 9, 1977, Sergei Ilyushin, an outstanding Soviet aircraft designer, Colonel General of the Engineering and Technical Service, academician of the USSR Academy of Sciences, died. OKB, which he headed, is today considered one of the leading Russian enterprises for the development of aircraft. Among the aircraft designed by Ilyushin residents, is also included the IL-76 - a heavy transport aircraft, which forms the basis of the military transport aviation Russia and Ukraine and consisting of many countries of the CIS and non-CIS countries.
Now in Ulyanovsk, the assembly of the first serial IL-76MD-90А, an upgraded version of the famous military transport worker, is being completed. We have collected five facts about the car, which already this year should go into service in the air forces of the Russian Federation.

IL-76 was collected at the Tashkent Chkalov Aviation Production Association. Since the 70-s in the enterprise, in total, about 1000 aircraft were built, of which more than 100 was sent for export.

The decision to transfer the production of Il-76 aircraft to Ulyanovsk was made in March 2006 by the President of the Russian Federation. Aviastar-SP Aviation Plant, created for the production of large aircraft (An-124 Ruslan), was at that time loaded to a minimum. The decision was made in a short time. April 3 on Aviastar held an emergency management meeting. And on the same day at 23.00, proposals were sent to the United Aircraft Building Corporation, including full information about production facilities, personnel, the level of digital technology of the enterprise, cooperation with other plants, and possible rates of production.
14 July 2006 was issued by the government of the Russian Federation to organize the production of IL-76 aircraft in Russia. The project received the code name "476". 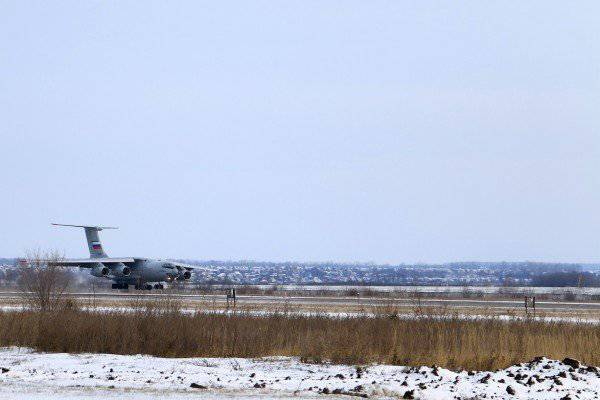 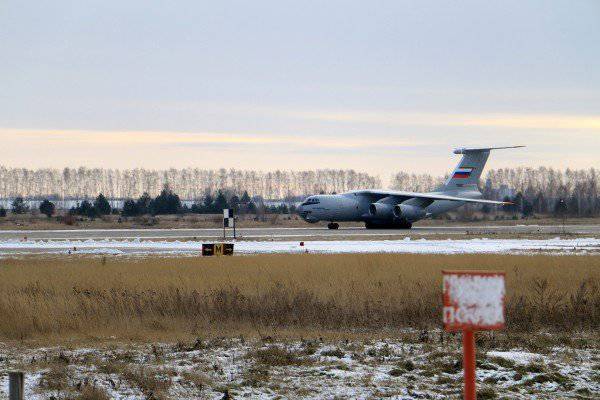 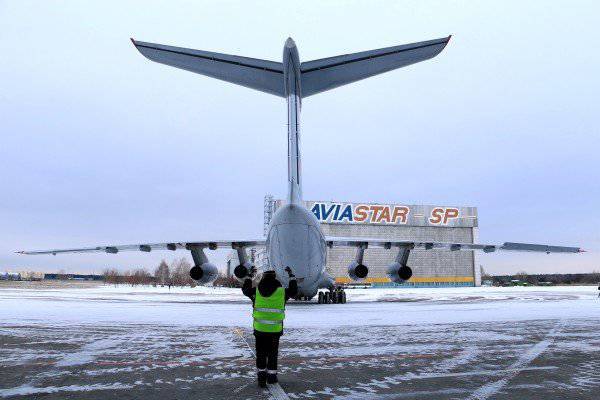 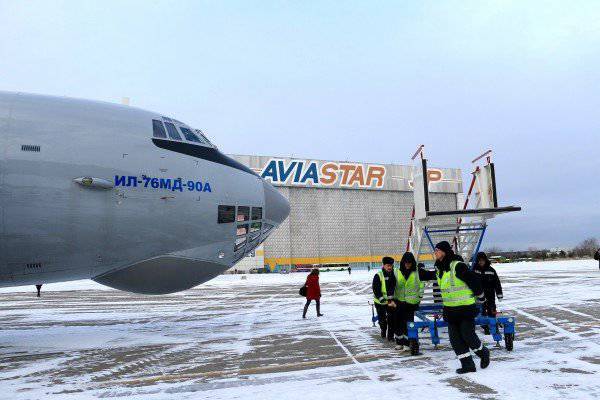 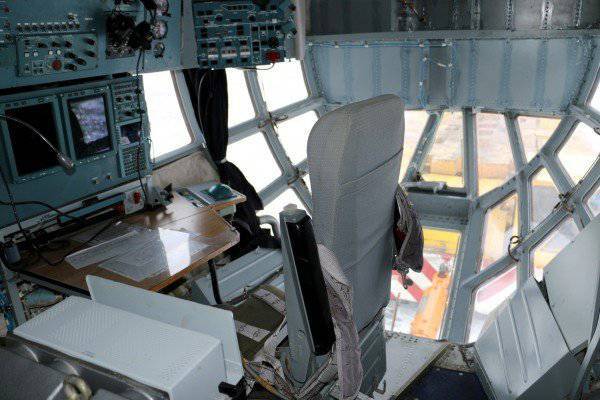 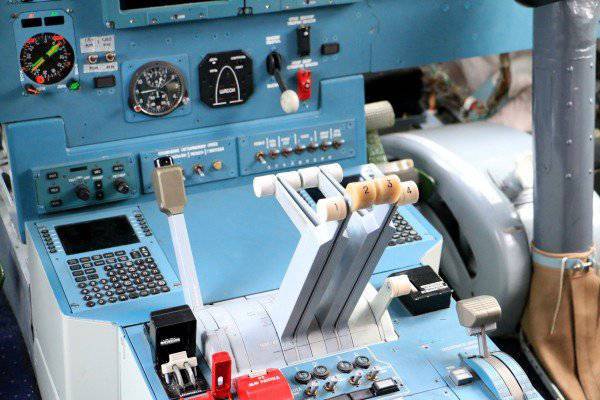 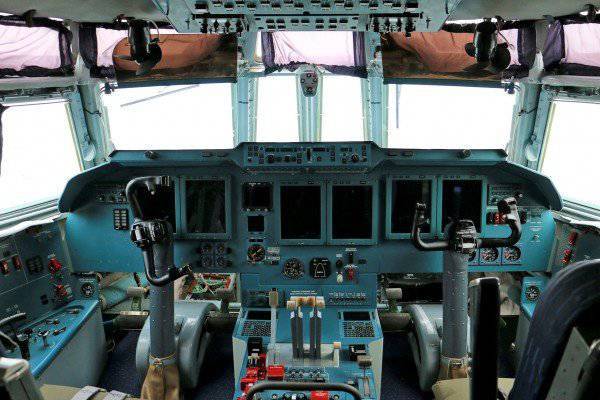 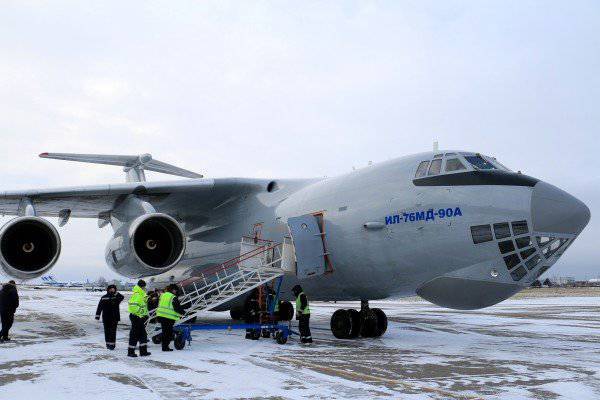 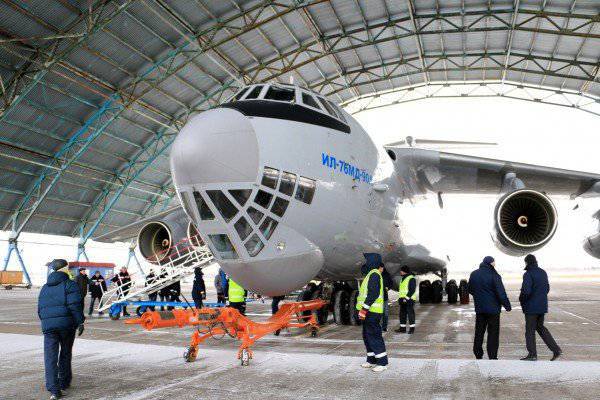 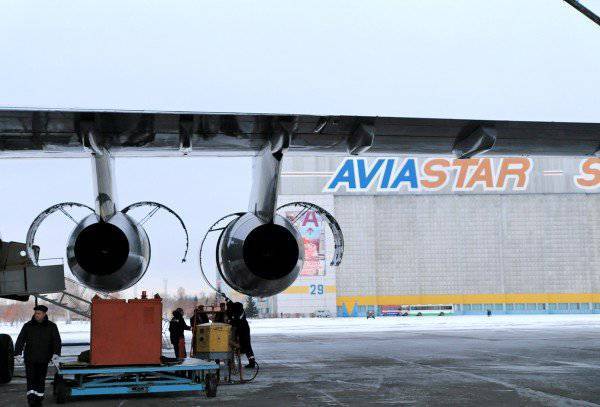 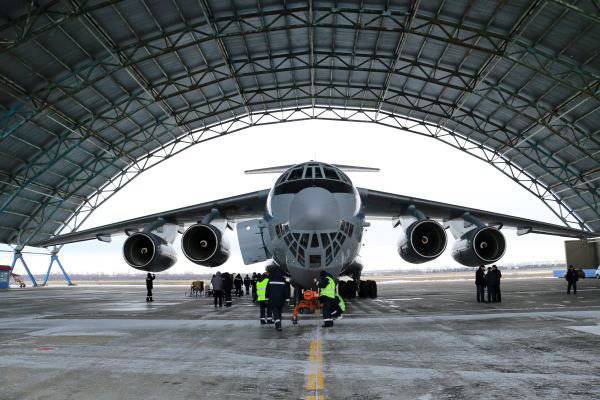 In total, the work on the deep modernization of the Il-76 aircraft took five years. Both designers and future manufacturers worked actively. The Ulyanovsk Aviation Plant in a short time made a “digital revolution”: previously, the planes were built here using a template-based method (when the mock-up of parts was cut out, in full size, from metal). IL-76MD-90А was the first aircraft that the Ulyanovsk citizens made completely using digital technologies.

The transition process was laborious: while the drawings were digitized, workers were trained in computer technology. Only a small part of the drawings was released on paper (for example, an electrician), but after working on the first plane, it was transferred to an electronic model.

Despite the resemblance, the upgraded version is very different from its predecessor. IL-76MD-90А has a different wing design, designed for a large maximum take-off weight (210 tons against 190). On the wing of the base machine was a connector in the middle; now there are solid 24-meter panels, which increased the resource.

The upgraded IL is equipped with Perm engines PS-90А-76, each of which has a ton 14,5 thrust. The aircraft is aligned with the ICAO, Eurocontrol, FAA USA standards and is built with the expectation of the future: it also complies with those standards that still have to enter into force. The flight resource of the upgraded machine is designed for 35 years of operation; designers intend to extend it to 45 years.

Changes have undergone and "filling" of the aircraft. It is equipped with new onboard radio-electronic equipment, a promising flight-navigation complex "Dome-3". The new digital autopilot allows you to land on the second category of ICAO, when the aircraft is brought to a height of 30 meters above the runway in automatic mode, and then landed already in manual mode. The predecessor flew in the first category (in this case, the height of the decision - 60 meters). This innovation will expand the scope of operation of the aircraft, primarily in Europe, where weather conditions may be more "difficult."

Also, the aircraft is equipped with a so-called glass cabin. Instead of the usual analog devices, the digital display field of aircraft systems and equipment is installed here. There are eight screens in the cockpit (six for pilots and two for the navigator). This option is more informative: the pilots are much easier to perceive a compact frame, which reflects the spatial position of the aircraft, its speed, altitude and other flight parameters.

FEATURES OF THE PLANE

The developers believe that the modified aircraft will be a serious competitor to Western air "trucks". There are no analogues in the class of ramp ships today. IL-76MD-90A can be operated in any climatic conditions with virtually no restrictions. The Russian aircraft is more unpretentious, compared to Western, it does not need a special infrastructure, it does not need constant serious maintenance. This is an important quality for the operation of hard-to-reach areas.

Another feature of the modernized IL-76 is the possibility of using it in various fields: as a military transport aircraft, tanker, for extinguishing fires. The developers intend to create a civilian version of the aircraft, which will certainly be in demand by commercial airlines. 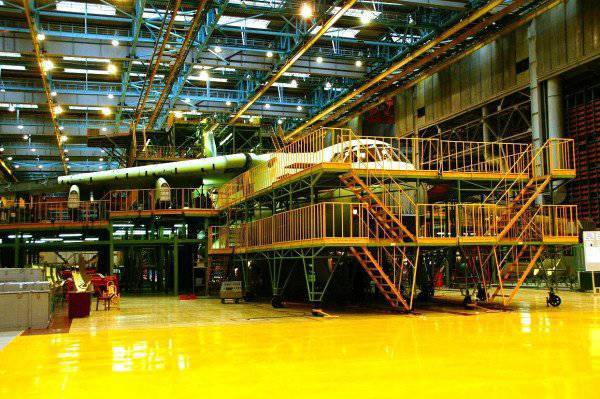 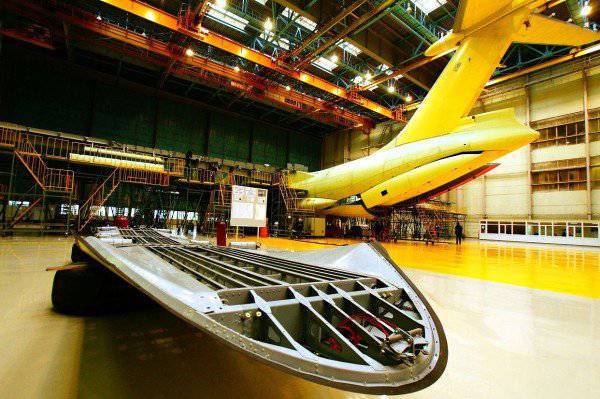 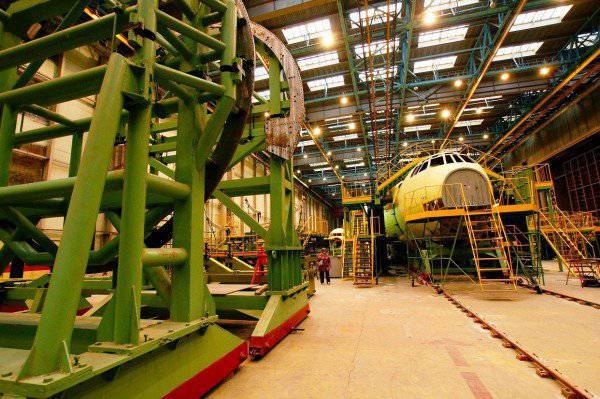 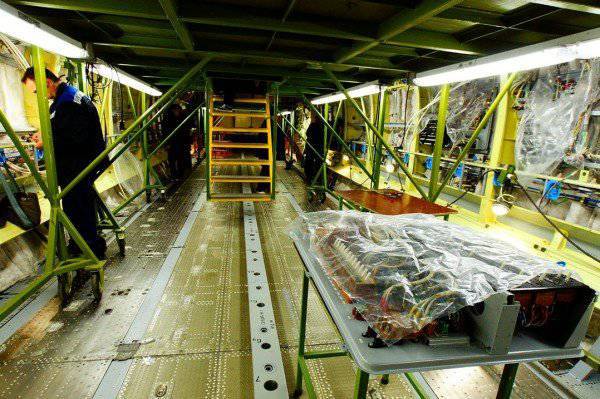 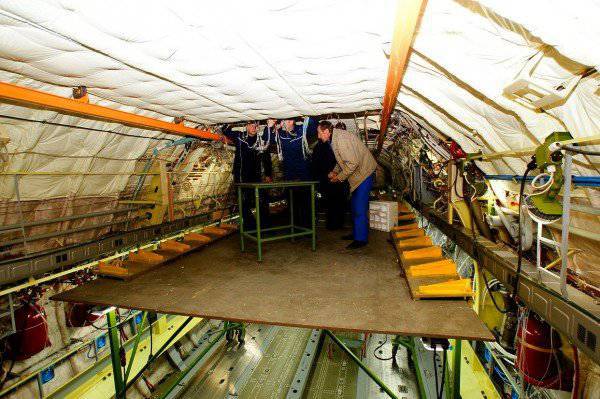 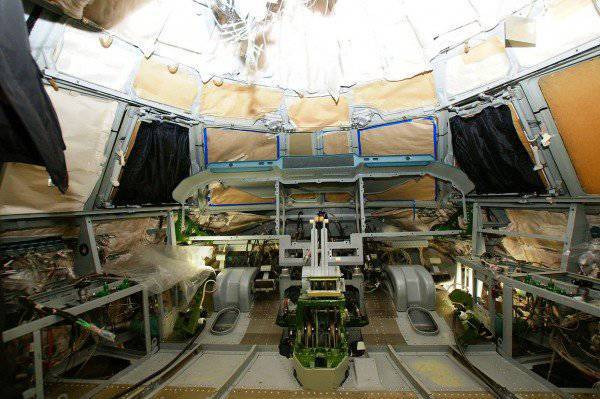 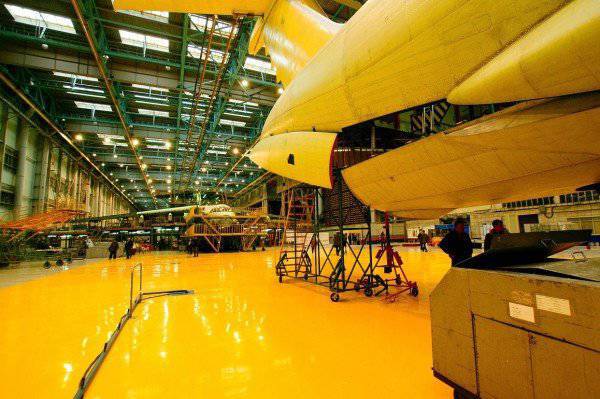 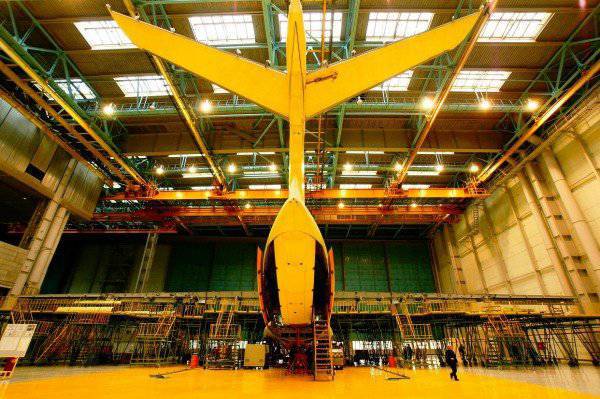 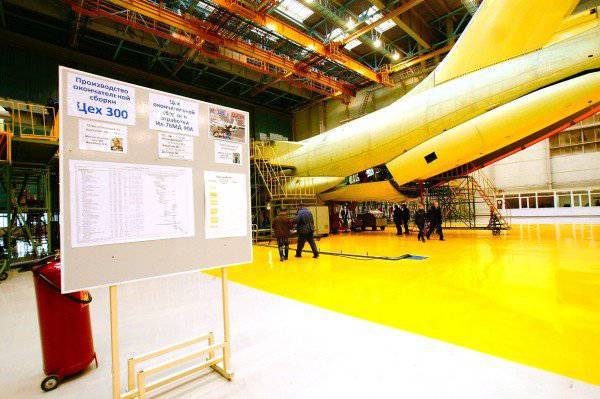 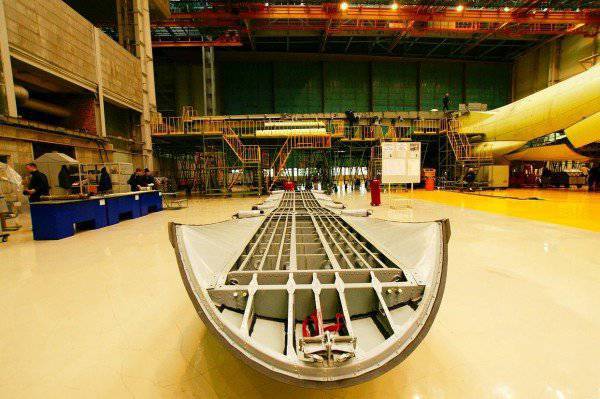 Now the main customer of the aircraft is the Ministry of Defense of the Russian Federation. Because of this, the assembly of the “476 product” prior to the start of 2012, was behind closed doors. For the first time, the aircraft was shown to journalists in January, during a visit to the Aviastar by Russian Deputy Prime Minister Dmitry Rogozin.

According to the state contract with the military department, Ulyanovsk citizens must assemble 39 IL-76МД-90А; this year, it is expected to sign a contract for the supply of the Defense Ministry of IL-78 tankers, which will be created on the basis of IL-76MD. Also, this type of aircraft is in demand for spetsbort, which are made in Taganrog. Thus, before 2020, Ulyanovsk will have to build up to 80-83 aircraft.

In December 2013, the first stage of the state joint tests of the modernized IL-76 was completed. The crew tested the ultimate strength modes and overloads, performed flights with maximum take-off (210 tons) and landing (170 tons) weight, worked out the procedure for an aircraft to go-around in case of failure of one and two engines. The second stage of state tests is scheduled for spring. Until this date, the aircraft will need to be modified under the technical specifications of the military. The first plane to the customer Ulyanovsk should pass in November 2014 year.

Now at the aircraft factory, at different stages of readiness, there are three first serial upgraded IL-76. Ten more are laid in the workshops procuring production.