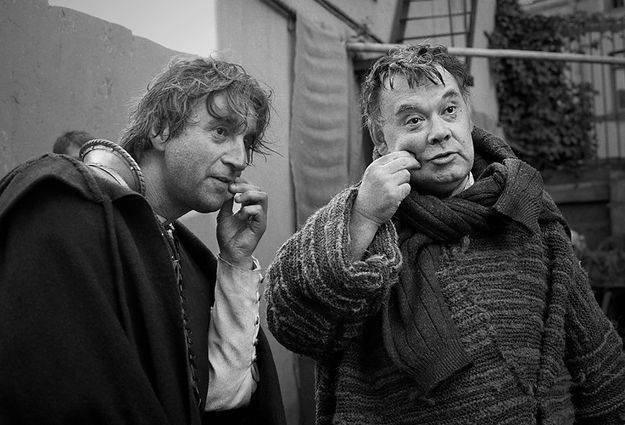 In two weeks, the movie “It's Hard to Be a God” will be released in broad distribution based on the story by A. and B. Strugatsky. The colleague already gave a brief description of the picture: it is such a great work that it is impossible to look. But this fact, of course, will not prevent the piece from becoming a hit (as if somebody had read the hits of "WikiLeaks" and "Snowden Documents").

Rather, in the case of "It is difficult to be a god" - not the film, but the primary source book will become a hit. For in the wake of film cinematographic reviews and interviews, they will immediately begin selling pokerbooks with L. Yarmolnik’s face - as an actual media product. So, already the third generation of reading citizens will meet with the enchanting world of noble dons, gray stormtroopers and black monks.

The book this year marks, by the way, 50 years. And on the eve of its next coming, it is worthwhile to speculate about why it is extremely important for us.

And she is extremely important. The story "It is difficult to be a god" is important because it vividly illustrates the main mistake of Soviet human-engineering. The error, the consequences of which we are cleared to this day.

If you're wondering what kind of error is it, let's talk about it.

... Briefly recall the world and the plot of the book. The mighty communist (after all, the book was written in 1964) mankind, “The World of Noon” - hunger, diseases, the caste system, illiteracy, and broke out into deep space. There, in space, it met its twin. Also humanity. Only the much younger are the impoverished, backward, uneducated, ill and suffocating in the unhygienic middle ages. That is - the same as our humanity was shortly before the "World of Noon".

At the moment when the action begins, decades have passed since the opening. Underdeveloped humanity is still suffocating in the unhygienic dark middle ages. Now, however, 250 earthly super spies under cover are working on the planet (they have secret kung fu, secret armor, money synthesizers, and hangover pills). But they are forbidden to whip up local history. They do not share knowledge with the natives. They also do not share ethical teachings with them. They are saving them from persecution and evacuating local intelligentsia to safe places. Both creative and technical. (By the way, why and for what the intelligentsia is persecuted - the authors themselves could not explain. It’s just being persecuted by the townsfolk in gray combat quilted jackets, and that's it.)

Why do positive people save only the intelligentsia? The question is interesting. But the main positive hero, the earthly intelligence officer, through whose eyes we look at this world, gives him a fairly simple answer: the other natives are simply not human for him.

It would seem some kind of garbage. He seems to be from the communist tomorrow, and not from the fascist? Yes, really bullshit. Nevertheless, we read from humanists A. and B. Strugatsky: “Two hundred thousand people! They had something in common with the alien from Earth. Probably the fact that all of them, almost without exception, were not yet people in the modern sense of the word, but blanks, blanks, of which only the bloody centuries of history will carve a true proud and free man. ”

The positive earthling don Rumata is generally very bright and talks a lot about local humanity and about himself in the midst of him. Let's listen: “Protoplasm. Just prowling and breeding protoplasm. " "Sticking your teeth and remember that you are a disguised god." “Is it full, are these people?” “This is hopeless. You can give them everything. You can settle them in the most modern houses and teach them ion procedures, and still in the evenings they will gather in the kitchen, cut cards and laugh at the neighbor who is beaten by the wife. And there will be no better time for them. ” “One thing remains: to save those few who can have time to save. Well, another ten, well, another two dozen ... But the mere thought that thousands of other, albeit less talented, but also honest, truly noble people are fatally doomed, caused icy cold in the chest. ”

Again the question: why are non-intellectuals for Don Rumata not full-fledged people?

Answer: therefore, why they are not for authors.

In the course of the cult story, a deep conversation takes place between an earthly intelligence officer and an aboriginal native. From it we learn the formula for building an ideal society, shared by both: “Make work and knowledge become the only meaning of our life.”

It is here, dear readers, that the central dog is buried. If A. and B. Strugatsky (young Soviet science fiction writers at the dawn of the space age) called the main purpose of life in an ideal society the survival, development and spread of humanity, the logic of the story would be different.

For if the survival, development and spread of humanity is the main meaning, then labor and knowledge are just his tools. It is clear that the more labor and knowledge - the better and further humanity spreads. But those who do not own these tools, no one calls the subhumans and pigs. And if they save - regardless of their abilities and scores in the report card.

And if the tool, that is, “labor and knowledge”, is appointed by the only meaning of life, then we immediately have a ruler for measuring skulls - not very valuable. It is not the same as that of the medieval aristocracy of the kingdom of Arkanar, and not the same as that of the Nazis of the 20th century, but it also quite regularly separates the elite from the cattle, and the noble don from the smelly men. And the main thing - positive, for a minute - the hero of the Strugatsky story uses this line with might and main. Defining, by the way, who will live and who will die - although it whines all the way about his overly humanistic earthly morality, which prohibits him from killing Aboriginal people personally.

... Well, what I am all about. The fact that this story has passed the Soviet censorship does not yet indicate a mistake in Soviet human engineering. No one is perfect, and censors too.

But the fact that millions of intelligent boys read this story, and were separated into quotations, and installed into themselves, says a mistake in Soviet human engineering in full voice.

For this means that those boys perceived themselves as aliens. Aliens from a better world. The highest caste undeservedly immersed in one society with subhumans and cattle. And the Soviet ideological machine stupidly failed to recognize and neutralize this caste arrogance in time. Most likely, because by that time the highest Soviet ideologists themselves had already become a hereditary caste. They have already given their grandchildren to special schools and special schools, began to overstock in import special shops and broke away from the lower arcanar of Soviet monotowns quite strongly.

What those intelligent boys turned into perestroika - many people remember. If they didn’t consider themselves to be abandoned to the Motherland, if they didn’t have a feeling of a different, better world to which they rightfully belong, they would hardly have driven this Motherland to this world with such enthusiastic readiness. But they believed, and the feeling they had. And we were blanks for them.

By the way. Today, the problem illustrated by the Strugatsky story is still highly relevant.

Indeed, now, twenty-five years later, the caste of noble dons is still alive. Partially - flew away to the ideological and climatic homelands, but partly still makes up both classes of the domestic elite: “boyariate” and “kreakliat”. And for both of us we are still strangers, of no value, non-native, vaguely threatening. Hama from the trolley. Gray stormtroopers, whose task - to destroy all their creative impulse.

And they with us did not declare any truce.

PS And by the way. The caste of noble dons still loves to quote the Strugatskys. In particular, the phrase that about us is with you: "Where gray triumphs, black must come to power."

So here. History gave us the opportunity to check this phrase for lice. The bright creative intelligentsia triumphed over the Soviet dullness and did not break through to the highest authority in all the Union republics (it did not break off in Belarus and Kazakhstan, especially). But the peoples of the republics will especially remember four attempts.

* Attempt by the film director Khudonazarov in Tajikistan: the result is ethnic cleansing, civil war and the degradation of the country;

* an attempt by the poet Gamsakhurdia in Georgia: the result is ethnic cleansing, civil war and the disintegration of the country;

* an attempt by the music and literary club of Alexander Mateyevich in Moldova (later known as the Popular Front): the result is a civil war and the disintegration of the country;

* an attempt by a translator and dissident Abulfaz Aliyev (Elchibey) in Azerbaijan: the result is ethnic cleansing, war with Armenia, the disintegration of the country.

Ctrl Enter
Noticed oshЫbku Highlight text and press. Ctrl + Enter
We are
About Stalin and KhrushchevWhat you didn't want to know about England
Military Reviewin Yandex News
Military Reviewin Google News
100 comments
Information
Dear reader, to leave comments on the publication, you must sign in.