The present message "On the situation in the country" 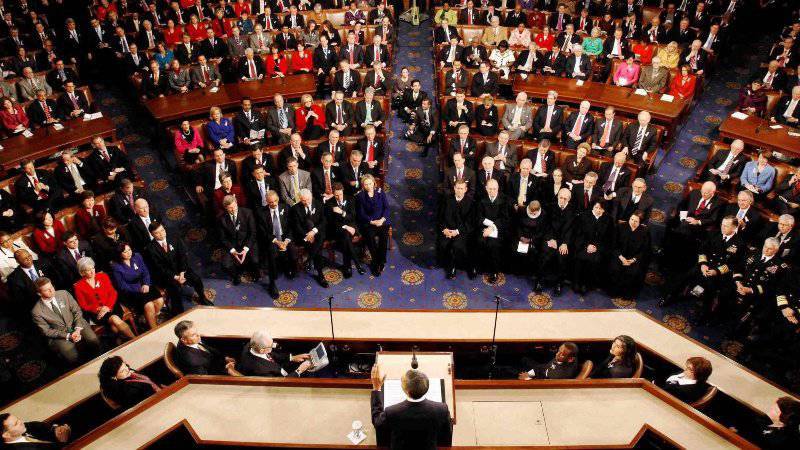 The message of US President Barack Obama "On the situation in the country" looked a bit surreal performance. The American government, hiding behind an avalanche of PR-quips, has long since not performed miracles for the common good.

And now it is advertising itself before an incompetent Congress, rejected by the overwhelming majority of Americans - including the growing number of those 76% who live from paycheck to paycheck - which remains a grandiose product of good old Hollywood.

And of course, Obama is a suitable actor who can deliver a suitable speech — surely better than Ronnie Reagan, whom Gore Vidal usually described as a “mannered president.”

The key theme of the message “On the situation in the country” was the terrible income inequality in the United States. You can call the Message a supplement of the past week to the World Economic Forum in Davos - this snowy Vegas for 0, 00001% - where the Masters of the Universe finally “discovered” the inequality. So much inequality that the 2014 year was immediately the Masters — and Japanese Prime Minister Shinzo Abe — was marked by the label of the new 1914 year, and it was all furiously dissolved in all the corporate meeting rooms of the modern non-permanent elite.

As soon as Obama got into his normal course, he announced that the Obamakear program had won, that he would use the decrees to rule the board, and that the vinaigrette of banalities and vague proposals and generalizations testifying to the inevitable success of his improvement program. “Odds” is the only way to combat inequality. Oh, yes - and also that the American Dream did not fall into a coma.

And, of course, not a word about the “soft”, consistent dismantling of what remains of American democracy, through the Orwellian / Panopticum complex, with which 0.00001% of the elite achieves its own disinfected Total Information Awareness (TIA) environment. With today's total control by the American government of the Internet, this dream that once owned the minds - the revolution will be just a television picture - and will not happen even on the World Wide Web.

In the absence of the late great Howard Zinn, Americans will have to come to terms with historical Clintonist Robert Reich. The Reich may be right in two of its causes of American malaise.

With a paralyzed American working class who fear losing their places (trade unions are virtually destroyed), with students stuck in a quagmire of horrific debts (and the average initial salary of graduates is constantly falling), two key vectors of protests are neutralized.

But Reich is mistaken in the third reason - that more than 80% of American public opinion is so distrustful of government to the government that they have given up on any possibility of reform.

The key point will be to check where American turbo capitalism has drifted from the middle of the 1970's. The point is not that the political clique of medieval Republicans, devil corporate CEOs (executive directors and their choice politicians) plus Wall Street are responsible for this. It is necessary to understand how insane speculations with financial assets plus crazy inflation of dubious financial support have become the defining features of the American and global system.

This implies a harsh criticism of advanced capitalism, which is not really “advanced” and not capitalism, which is an absolute taboo for the corporate American press. It all began long before the prophet Ronnie Reagan, then continued with Bubba Clinton and then almost continuously with Dabyu * and Obama.

A recent graphic illustration was a system in which 85 people - they can easily be placed in one London double-decker bus - possess the same wealth as the poorest 50% of humanity. How is this possible? A superficial introduction to David Harvey’s amazing “Brief History of Neoliberalism” (OxfordUniversityPress, 2005) will answer many questions - such as tricks such as the economic theory of "seepage" **, tax cuts for the wealthiest and corporations, the destruction of unions, and the reduction in real wages transfer of jobs abroad, deprivation of the rights of everyone who does not belong to 0,00001% and complete freedom of their banking and financial "casinos". The end result: a whirlwind concentration of wealth - which has nothing to do with democracy in the republic.

Good old Uncle Marx would call it all his name - class war. And 0,00001% won effortlessly, quickly and easily.

It is very easy to forget that Daby inherited an impressive budget surplus. Then he cut taxes on the rich, unleashed two terribly expensive wars, one of which was because he “had to bomb someone,” and the second simply because war was preferable; And besides, he led the conference of the biggest collapse of Wall Street since the Great Depression.

And yes, the whole thing is in the continuous sequence of actions of Bush and Obama. At the time of Obama's “recovery,” the value of 7% assets of the richest Americans rose by 28%, while the value of the rest of the assets fell by 4%.

At least 80% of American voters do not want to cut social programs for the sake of a balanced budget, they want tax increases for the rich and for corporations. Instead, Obama cuts social security.

And there is also the destruction of American cities: this is a study of the details of how Detroit was “fingered”, and the state of Michigan spent a whole fortune on “stimulating business”.

And besides, Jamie Daimon's Syndrome, JPMorganChase CEO, is also “one of the smartest bankers we have” Obama. Even if the US number one bank lost billions in questionable toxic securities backed by a pool of mortgages, manipulated energy prices and even cheated on customers' credit cards, your CEO will receive generous bonuses - because the stock price rose in 2013 by 21%.

Whether Obama was honest - just a little or not - in the Message - is irrelevant. In addition to the frankly absurd statements on Iran, Syria and Israel-Palestine, not a single word was said about Russia and China, not to mention the heartbreaking shots of the Hollywood-style climate catastrophe, and army rangers who almost died in the explosion of IEDs in Afghanistan. Obama himself became a living metaphor for his slogan “Yes, we can”, a remix of 2014 of the year.

It is curious that right before the Message, the US government and the Pentagon leaked through the New York Times, that if the “small number” (as Obama put it) of the American troops remain in Afghanistan on a permanent basis, the CIA will continue to send drones to the Pakistani tribes to complete destruction, and will continue to use Afghan bases to spy on Pakistan.

So, the whole thing - in the dirty wars of the CIA. Obviously, none of the components of AfPak want this state of affairs - so everything looks as if Obama's heroes will have to fight mortal combat for an eternal scam. God be with them, they will change the deadly improvised bombs for a new blow to the country of "opportunities." Is it so? Yes, that’s what the US president said.

* - “Dabya”, the nickname of 43 US President George Walker Bush; from the Texas pronunciation of the letter W in the initials.

Ctrl Enter
Noticed oshЫbku Highlight text and press. Ctrl + Enter
We are
What we lostBarack Obama: a session of mass hypnosis in the US Congress
Military Reviewin Yandex News
Military Reviewin Google News
26 comments
Information
Dear reader, to leave comments on the publication, you must sign in.