February 12 2014
16
A few days ago, the exhibition of weapons and military equipment Defexpo-2014 ended in India. During this event, several agreements were signed for the supply of various military products. In addition, the exhibition resulted in contracts and memorandums of cooperation. So, Ukraine and India intend to create a new anti-aircraft missile and artillery complex (ASC) for the Indian armed forces.


According to the official website of the Ukrainian state concern "Ukroboronprom", representatives of the State Enterprise GHVP "Spetstechnoexport" (Ukraine) and the company Larsen & Toubro ltd. (India) signed a contract for the creation of ZRAK for participation in the tender of the Indian Ministry of Defense. The Indian Armed Forces intend to purchase 138 units of a promising anti-aircraft system, and the Ukrainian defense industry, together with the Indian one, are going to create such equipment and receive a major contract. According to the published data, the Indian company Larsen & Toubro ltd. will receive tender documents and will be able to take part in the competition. The Ukrainian side, in turn, undertakes to supply one combat and one command vehicle of a promising anti-aircraft complex.

On the Ukrainian side, several defense enterprises belonging to the Ukroboronprom concern will be involved in the work. So, the construction of the command vehicle of the new ZRAK will be dealt with by the Kharkov Automobile Plant. The combat vehicle of the complex should be manufactured by the State Space Design Bureau “Luch” (Kiev). The gun for the anti-aircraft complex should be presented by the Kiev design bureau Artillery Armament. Terms of construction of two cars new ZRAK have not been announced.

If the promising anti-aircraft missile and artillery complex, which will be created by Ukrainian specialists, is arranged by the Indian Ministry of Defense and is adopted, the cooperation of the two countries in the military-technical sphere will reach a new level. It is worth noting that in recent years, countries are constantly expanding their cooperation. During the recent exhibition Defexpo-2014, deputy general director of Ukroboronprom, M. Glushchenko, spoke about the dynamics of the development of cooperation between Ukraine and India. In 2012, the total volume of Ukrainian-Indian contracts for the supply of weapons and military equipment amounted to 120 million US dollars. The following year, 2013, the total volume of contracts amounted to 397,4 million.

Thus, a possible contract for the supply of 138 anti-aircraft missile and artillery systems will be the largest agreement between Ukraine and India for the supply of weapons or military equipment. For obvious reasons, it is too early to talk about the results of the tender of the Ministry of Defense of India or about the prospects for a new SURK of Ukrainian design. Now it is known only about the existing agreement between the enterprises of the two countries, and more detailed information is missing. Because of this, at the present time, one can only speculate and try to predict what the new PSRA will be for the Indian army. 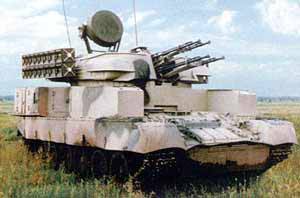 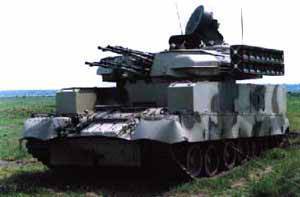 It should be noted that Ukrainian defense enterprises have some experience in creating anti-aircraft systems. It is possible that in the new complex for India, some developments from previous projects will be used. For example, back in the late nineties, the Ukrainian defense industry introduced the Donetsk air defense system, which was a deep modernization of the ZSU-23-4 Shilka anti-aircraft gun. The Donets machine was a modernized Shilka tower mounted on a modified chassis of the main tank T-80UD. ZRAK Donets retained the old radar sight, but received a digital fire control system, navigation system and equipment for working with external target designation. In addition, the ammunition capacity of the guns was doubled. To increase the combat qualities on each side of the Donets tower, two transport and launch containers with missiles of the Strela-10M complex were installed.

CENT "Donets" was a variant of the deep modernization of ZSU "Shilka" with the extensive use of existing components and assemblies. For obvious reasons, such a development has a very limited potential and is unlikely to be able to interest potential buyers. For this reason, by the end of the last decade, Ukrainian specialists began to develop a new anti-aircraft missile and artillery complex "Centaur".

In terms of its architecture, the CENTER "Centaur" is similar to the "Donets" system, but it has a number of serious differences. As the basis for a new combat vehicle, an existing or advanced tank chassis was proposed. This chassis is supposed to install a tower with weapons and a complex of electronic equipment. In front of the tower, the Ukrainian designers placed two automatic guns of 40 caliber mm. According to some reports, 57-mm guns were proposed in the early stages of development, but in the end, smaller-caliber guns were chosen. On the sides of the turret of the machine "Centaur" should be placed lifting launchers with eight (four on board) transport and launch containers of anti-aircraft missiles. In the stowed position, the containers should be located inside the armored casing.

Possessing a radar and optical-location systems for target detection and weapon control, the Centaur SCRA could simultaneously attack two targets. The transported ammunition was to consist of 8 guided missiles and 200 high-explosive fragmentation and armor-piercing shells. According to reports, when using missiles, the Centaur complex will be able to hit targets at ranges up to 12 km and at altitudes up to 6 km. When attacking with artillery systems, the range of damage is reduced to 6 km, the maximum height to 4 km. Thus, according to the idea of ​​the authors of the project, the promising CRAFT "Centaur" could provide air defense of stationary objects and troops on the march in the near zone, attacking approaching targets of various types with rocket or artillery weapons.

As you can see, Ukraine has certain achievements in the field of anti-aircraft systems. Using these developments, enterprises that are part of the Ukroboronprom concern will be able to create a modern anti-aircraft missile and artillery complex in the foreseeable future. The exact dates for the commencement of tests of the combat and command vehicles of the new AGREEMENT are not yet known. Moreover, at the moment it is precisely known only about the existence of a treaty between Ukraine and India. Probably, new information on the development of promising PSRA will appear in the very near future.