What kind of "fascists" in Switzerland? 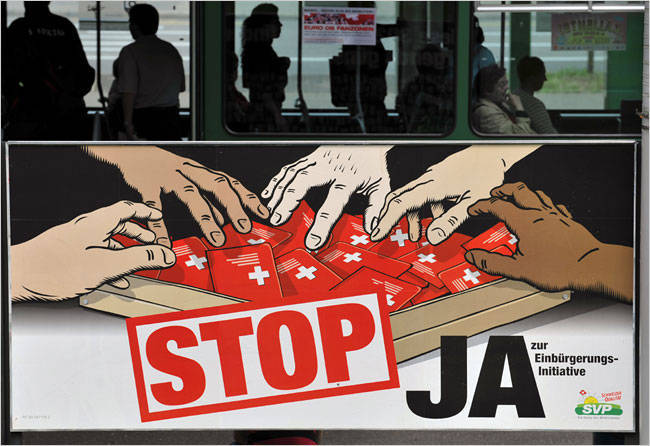 A referendum called “Against Mass Immigration”, initiated by Schweizerische Volkspartei (Swiss People’s Party, SNP), was recently held in Switzerland. After counting the votes, it turned out that 50,4% of Swiss people want to return to the quota system for migrants. The constitution will now be amended. Restrictions primarily affect the workforce from the EU, against which the SNP. The party believes that the country cannot host 80 thousands of foreigners a year, who take jobs from the Swiss.

The SNP cites data showing that the number of migrants makes up almost one fifth of the total population of Switzerland (that is, combined with migrants). There are almost two million foreigners in the country, plus eight million inhabitants. Party members do not want unemployment to increase in their home country. Well, and something else they don’t want: half of the crimes committed in the country fall on just 20% of migrants.

The European Commission, of course, did not like the results of the popular vote. According to the commissioners, the decision of the Swiss violates the principle of freedom of movement.

The “leaders” of the European Union hardly like the Swiss People’s Party, which in Brussels is considered to be far-right, almost fascist. There are some grounds for such an opinion.

In 2009, the Swiss People’s Party initiated a referendum on a ban on the construction of minarets in the country. 59% voted in favor. "Populists" oppose Islamization. Their opponents talk about the violation of religious freedom and discrimination based on religious principle.

In 2012, the party member Alexander Muller fell apart. 24 June he tweeted: "Maybe we need the Crystal Night again ... but this time in the mosques." After mass criticism in his address - both from opponents of the party, and from its supporters and members of the same party - Müller had to withdraw from the SNP. The corresponding party statement angrily noted that the SNP would not tolerate comparisons with the "disgusting" Hitler. Muller was distinguished by hatred of Muslims before. In the same "Twitter" he reported: "We need to send this gang out of the country. I do not want to live with such people. ”

There is a third reason to accuse the SNP of “fascism”. Right-wing radical parties in the EU countries, also opposing migrants and Islamization, today look with approval on the activities of the SNP, especially on the results of the recent referendum.

In fact, this party is quite an ordinary conservative right. Scandals happen anywhere, but today almost all countries of Western Europe oppose mass migration, it is not necessarily done by “fascists”.

The richest people participate in the SNP, including Christoph Blocher (a billionaire who made his fortune in the chemical industry and worked as Minister of the Federal Department of Justice and Police of Switzerland in 2004-2007) and Walter Fry (owner of a large auto trade company Emil Frey AG) . Therefore, millions for election campaigns for the party is not a problem.

The election “fad” of the SNP, in addition to dislike for minarets, is a permanent hard line towards migrants, as well as foreign refugees. The party “sentenced” foreign criminals to “automatic” deportation. The party is also known for its hostility towards the EU. Today, there are three countries in Western Europe that are only partially involved in the union economy: Liechtenstein and Norway enter the common market through the European Economic Area, and Switzerland has a similar relationship, concluding special bilateral treaties. Central opponent of EU entry in Switzerland - guess who? The SNP slogan in the last election was very intelligible: “You do not want to join the European Union? Vote for SNP.

The party has existed for a long time - it's already forty-three, since September 22 of 1971. In addition to what is listed above, the “populists” are in favor of the neutrality of their native country, for the reduction of taxes and government spending.

Let's take a brief look at the materials on the party website.

Approximately two million foreigners live in Switzerland, and about one in three have non-Swiss roots. There is no other country in Europe with which Switzerland would be comparable in such strong mass immigration.

At the same time, Keller notes, Switzerland is one of the richest countries in the world. Moreover, its prosperity is not based on raw materials like oil, but is based on principles and on the productivity of the liberal economic order, on the values ​​of the middle class.

Yes, Switzerland can successfully integrate immigrants, it is proven by time and history (the author gives examples). But 80 thousands of additional people per year is too much. Here "integration" is doomed to failure.

А here quite fresh article published after the referendum. Its author is Tony Brunner.

Mr. Brunner notes that the time has come to embark on a revision of the migration agreement with the EU.

Following the country’s existing constitutional order, the author notes, should not depend on the EU’s response. The government should not succumb to EU blackmail.

Switzerland is not a member of the European domestic market and does not have the slightest desire to become one. The referendum decision is a clear signal against further institutional integration in the EU with its “foreign judges” and legal “takeover”.

What Brunner writes about is called “Euroscepticism” in Europe.

However, it is impossible to get around the issue of economics. Where does the current wealth of Switzerland come from? From the export of goods and services. How many of them are exported to Europe? Many - 60%. And imported? Even more - 82%. In the case of a “negotiated” conflict with Brussels, the latter will find what to answer. Of course, the answer will not be political, but economic. If the Swiss government fails to reach an agreement with the EU after the referendum, problems may occur with Swiss goods. Exports will inevitably decline due to new difficult conditions, and imports will rise in price. In this case, the Swiss will have to go to a new referendum and vote to open borders for migrants. Simultaneously with such a referendum, the popularity of SNPs will be ensured - after all, she threw the idea to the people.

However, the Swiss understand perfectly: the annual influx of migrants into the country will inevitably lead not only to an increase in unemployment (today it is low - only 3,2%), but also to social instability. Here you and guest workers, and criminals, and excessive pressure on the entire infrastructure, not designed for so many people. The problem of migrants is very acute in many countries of Western Europe.

Russia, too, should have a closer look at the latest Swiss experience. According to UN data from last year, in Russia there are 11 of millions of migrants. And by the number of their country ranks second in the world. Ahead of the rest of the world - the United States, in third place - Germany.

Observed and translated by Oleg Chuvakin
- especially for topwar.ru
Ctrl Enter
Noticed oshЫbku Highlight text and press. Ctrl + Enter
We are
Results of the week. "Well, do not change me because of every idiot!"Is free will?
Military Reviewin Yandex News
Military Reviewin Google News
66 comments
Information
Dear reader, to leave comments on the publication, you must sign in.