German sausages, Icelandic will, sour milk and fakie in a circle 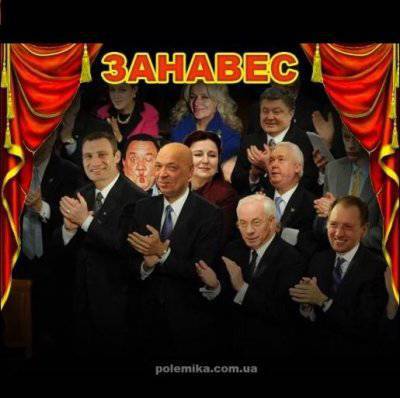 Clearly focused Europe sight lost. Within the framework of the “Ukrainian Plan”, they are increasingly talking about mediation, without an aggressive policy. Offended by the fast “flashback in Nuland”, Merkel showed her own response: today she officially declared that she did not support sanctions against Ukraine and did not even see any reason for them. On the agenda - the settlement of the conflict between the government and the opposition. For this, the German Foreign Minister Frank-Walter Steinmeier 13-14 February is serving Putin to discuss Ukraine.


Political analyst Zbigniew Brzezinski is convinced that in order to stabilize the situation in Ukraine, three compromises are needed: between political parties; between the EU, Ukraine and Russia; between the USA and Russia. The question is, did Brzezinski not forget where the United States is geographically located at all, and where are Russia and Ukraine?

At today's meeting of the Council of the European Union, they also discussed not sanctions and not material assistance, but the possibilities of resuming the political dialogue in Ukraine and the formats of cooperation in the framework of the Eastern Partnership. Bones lay on the bag with the euro and Polish Foreign Minister Radoslaw Sikorski. "Ukraine will receive money from the IMF, the European Investment Bank, the European Bank for Reconstruction and Development and macroeconomic support from the European Commission only when it starts to implement economic reforms." No reform - no money. Here it is, Europe, controversial. That claims that Ukraine is fully prepared for the Euro-Association, “the contract and the handle on the table” - take it, Yanukovych, sign when you want. That is the opposite: Ukraine is immature, backward, unreformed. Only one thing remains for her: according to Sikorsky, if Yanukovych chose the EU, he would be happy to be helped in the fight against the Russian trade boycott. Sikorski also suggested that the EU could hardly find additional money for Ukraine, and the plans are to redirect attention to more promising results for Georgia and Moldova in the framework of the Eastern Partnership.

According to skeptical European diplomats, it is more efficient to appease Georgia and Moldova than to feed the ungrateful Ukraine, which is able to suck in billions and thank the USSR for its revival. And in Ukraine, a new trend. Sleep on Yuriy Lutsenko’s PIZO bed and take a ride in Yulia Tymoshenko’s paddy wagon. Today, two victims of the regime bragged about this: ex-deputy Markov and Dzyndzha activist. In the "star" paddy wagon drove to court in Odessa Markova. “Six hours in the same paddy wagon and with the same convoy that Tymoshenko and Lutsenko had. I was told that this is an improved paddy wagon - there is a stove, ”he shared happy impressions about the journey. Dzyndzya told about the fungus on the ceiling of the cells and the rotten mattresses of the Lukyanovka pre-trial detention center, mentioning that his lawyer was in Yury Lutsenko’s cell and “even sleeps on his bed”. Under the pillow, which was never changed after Lutsenko’s discharge, attorney Dzyndzi Smoliy found a bread inkstand with sour milk and an old nail, which the future hetman of the Third Ukrainian Republic scratched his first memorandums with in a Leninist way.

A couple of star meetings held Bulatov. Lithuanian home blonde Dalia Grybauskaite celebrated him at the presidential table, which she did not fail to write on Twitter: “I met with the leader of Avtomaydan Bulatov, who is being treated in Lithuania.” Bulatov touched her very much, and the conclusion of the meeting was voiced in the same Twitter: “A peaceful solution in Ukraine should be found as soon as possible.” “As soon as possible” Bulatov also wishes: he didn’t like the tail of the train, so the Avtomaydan driver plans to move immediately to Europe’s locomotive, to Germany, where, he claims, his parents live. For the sake of reuniting with parents, both ears could be cut off. The German youth organization of European conservatives has already sent a letter to Foreign Minister Frank-Walter Steinmeier asking him to help in this matter.

Are sausages fatter in Germany? There are no people talking "with a Russian accent"? Why to Germany, and not to any Iceland?

By the way, it would be useful to live in Iceland and Bulatov, and those for whom the concept of “power of the people” was reduced to a multi-voiced lowing at the meeting, while “Batkivshchyna” and “Strike” dealt with guarantees of presidential powers within the framework of the future constitution.

Several years ago, shocked by the economic bankruptcy of their own country, Icelanders sent to hell creditors, refused IMF assistance, refused to pay huge virtual debts and wrote their own constitution. We discussed a preliminary 700-page version of the network and among experts, amended and voted in a referendum. Europe, which has in recent years poked its nose in all the constitutional amendments of its current and potential "wards", was shocked. But experts called the document Euro-socialist, one of the most modern and pragmatic in storiesdevoid of "lyricism" and speculation on political or national themes. By the way, the question of joining the EU will be decided by Iceland in a referendum - according to forecasts, more than half of the island are still against, fearing that Brussels will monopolize the main profitable Icelandic industries.

By the number of “bodies” inhabiting it, the city of Kiev alone is larger than Iceland's state by 10. Even if you believe the crooked statistics of Euromaidan on his best days, Iceland's citizens are placed on it entirely. Since November, many, even nice liberties, have allowed Euromaidan: “Yulu from Yolka”, “Nickname-nah.y”, “Bandu got”. People dancing, praying and singing a hymn. He prepares borscht and incendiary mixtures, paints construction helmets in the style of Petrikov's paintings. He invites Bogatyryov to the medical unit to attend a master class and Yanukovych to a debate with Klitschko. Looking for Lutsenko, mourns Bulatov's ear, Chernovol regrets, watches a gay series with Portnikov.

Just do not write a constitution. Euromaidan increasingly resembles a suitcase without a handle: it is a pity to quit, but circumstances require. The information field has long since shifted from the squares and streets behind the scenes. And there are less and less reasons worthy of promulgation at the meeting. The people, who, to the right and left with the true generosity of the Ukrainians, distributed “mandates” to all her adventures to the opposition, did not officially show even the edge of that very scandalous letter of Tymoshenko, with which she prevented the encroachments of her “sons” on the ministerial portfolios and presidential chair. But who, if not the “people”, should write a progressive Ukrainian plan. The physics textbook recalls: force is equal to mass times acceleration.

The Ukrainian people did not notice how he got a pair of kicks in the ass. But this is what the yard punks talk with a small fry, which according to the constitution still has to grow and grow up to the source of power.