Exploration of the moon is still difficult

February 11 2014
26
2013 year was marked by the launch of the first Chinese lunar rover, called “Yuytu” (“Jade hare”), to the natural satellite of Earth. Yuytu was the first spacecraft to land on the Moon after a long break. The last soft landing on our satellite was carried out back in 1976, by the Soviet space station Luna-24, and the last rover, the Soviet spacecraft Lunokhod-2, visited it more than 40 years ago. His program was completed on 11 May 1973. At first, the Chinese program was developing quite successfully, but then it ran into difficulties. The recent failure of the Lunokhod just reminded of how difficult it is for humanity to take every step on a natural satellite.


The Chinese lunar rover is a unique six-wheeled vehicle that can move across the lunar surface at speeds up to 200 meters per hour. The tasks of the apparatus include the study of the geological structure of the moon and its soil.

Lunokhod received an unusual name in honor of one of the famous characters of Chinese mythology. According to legends, the jade hare lives on the Earth’s satellite and is preparing immortality powder there.

The Jade Bunny was delivered to the moon using the Chanhe-3 spacecraft (according to Chinese mythology, it is the moon goddess) December 16 2013 of the year. Successful landing of the "Yuytu" was the first, since 1976, the appearance of an earth apparatus on the surface of the moon.

Immediately after landing, the lunar rover sent a number of color photographs to Earth, one of which clearly shows the moon rover and the Chinese flag above it. Immediately after the successful landing of the moon, the representatives of the People's Republic of China started talking about the fact that in the year 2017 they were planning to launch another research satellite probe, “Chang'-4”, on the moon. The objective of this space program is to deliver soil samples from the Moon to Earth. 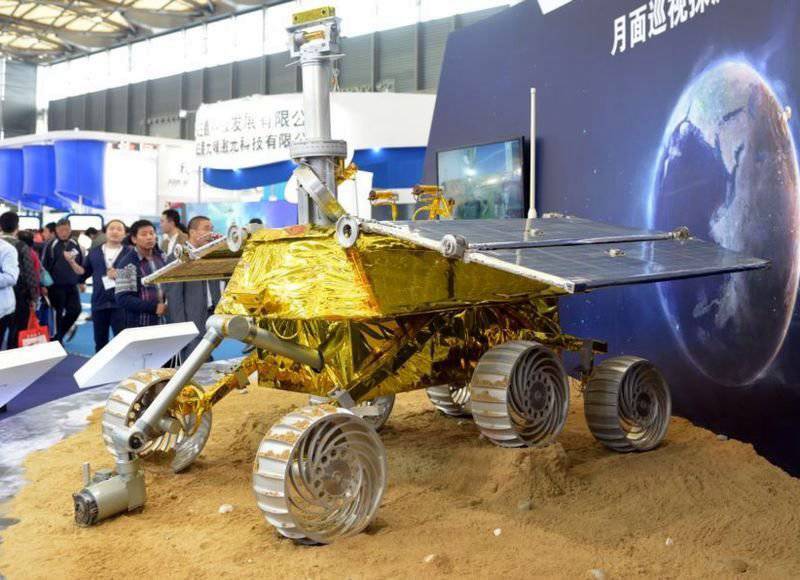 However, at the end of January 2014, the Chinese lunar rover failed. Experts have fixed problems in the system of mechanical control of the Lunokhod. Chinese engineers explained the problems and disruptions on his board that were caused by the “complex surface topography of the moon” in the area of ​​the “Jade hare”. Currently, work on the restoration of the functioning of the Lunokhod continues.

According to the original plan, the Chinese space agency expected that the device would leave the natural satellite of the Earth in March 2014. At the same time, it is currently not known whether the apparatus’s damage will affect the schedule of the lunar expedition. It is also worth noting the fact that the malfunction of the “Yuytu” lunar rover was the first public failure of a rather ambitious Chinese space program. Prior to this, for several years, the People's Republic of China successfully launched various manned spacecraft into space.

All this is interesting in the light of the upcoming lunar program of Russia. In 2016, the Russian spacecraft Luna-25, the vanguard of the Russian landing force, which consists of 5 stations, will go to the surface of the moon. Will be among them and your moonwalker. Fortunately, the experience of sending such ships to the moon has our country. At one time, the USSR sent two planetary rovers to the surface of the Moon: Lunokhod-1 and Lunokhod-2. At the same time, the "Lunokhod-1" became the first rover in stories humanity.

"Lunokhod-1" conducted a detailed survey of the lunar surface on an area of ​​80 thousand square meters, passing on the moon 10 540 meters. The device has moored the 17 of November 1970 of the year, the last successful communication session with the Lunokhod was held on the 14 of September of the 1971 of the year. The device has transmitted more 200 lunar panoramas to Earth, as well as more 20 thousands of images of the lunar surface. However, he was engaged in the transfer of not only visual information, conducting in the course of movement of physical, mechanical and chemical studies of the properties of the soil. The duration of the active functioning of the apparatus on the lunar surface was 301 day 6 hours and 37 minutes. 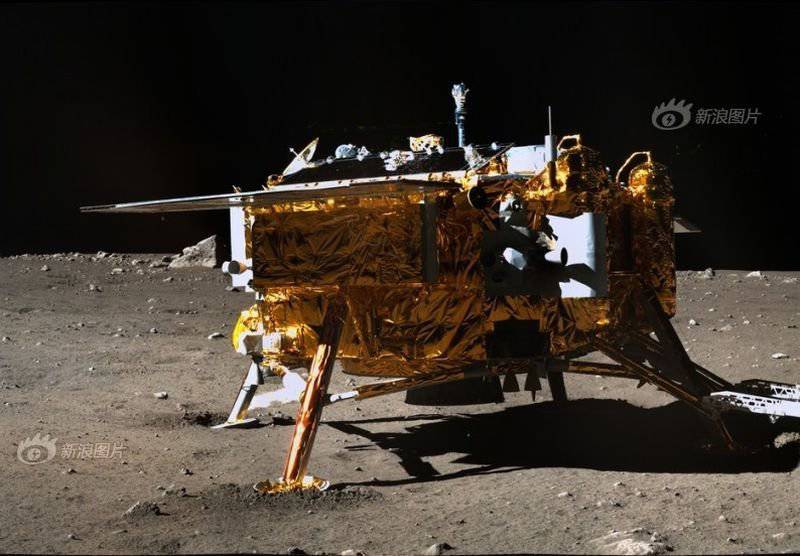 The second Soviet spacecraft to study the lunar surface, the Lunokhod-2, successfully sunk into the 15 of January 1973. After landing it turned out that his navigation system was damaged. As a result, the ground crew constantly had to navigate the sun and its surroundings. Despite such damage, the device managed to overcome a much greater distance compared to its predecessor. This was due to the experience of the Lunokhod-1 control and a number of innovations in its design. Over the 4 months of operation, the unit overcame 42 km. 86 panoramas of the Moon and more than 80 of thousands of frames of photography were sent to Earth. The operation of the device was terminated earlier than scheduled due to overheating of the device and its failure.

Against this background, problems and unfavorable factors that should be taken into account when creating lunar vehicles are of interest. According to the official Chinese media, the cause of mechanical problems on board the Jade Hare was the complex situation on the lunar surface. According to the bloggers, he didn’t have solar batteries when preparing the device for putting to sleep during a moonlit night. The reason for this was either a computer failure, or the presence of small particles of soil in the mechanism. Ban Zhihao, who is a member of the National Academy of Space Technologies, identified the following probable causes of the malfunction: weak gravity, strong radiation and significant temperature fluctuations.

Various Soviet and American vehicles have been landing on the surface of the Moon since the 1960s. Therefore, the conditions that exist on its surface have been known for a long time to designers. These are radiation, vacuum, very low temperatures at night (up to -180 degrees Celsius), as well as loose soil. The Russian “Luna-25” device will also plunge into sleep on 2 weeks while the local night lasts on the moon, noted Igor Mitrofanov, head of the laboratory of gamma-spectroscopy of the Space Research Institute of the Russian Academy of Sciences. 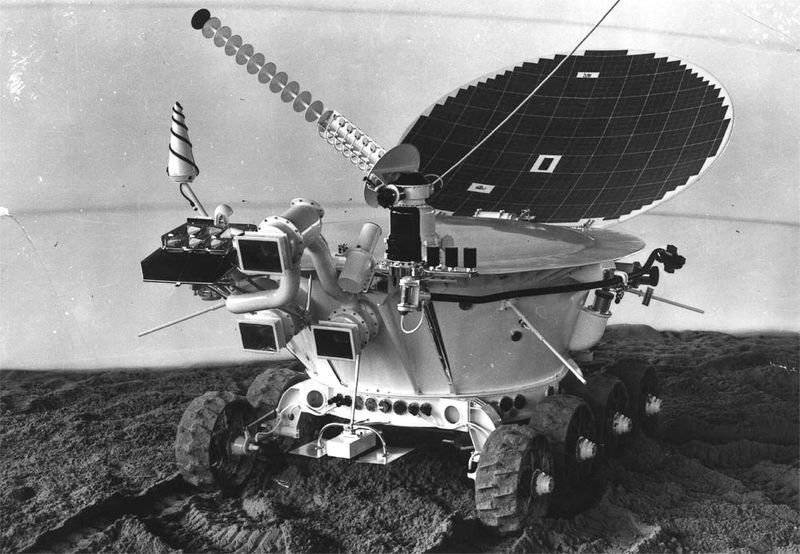 The specialist notes that the most effective way of normal functioning of the apparatus on the Moon is the direction of all the energy that is produced on board, to its own heating. The spacecraft is wrapped with a multilayer film and a special blanket. In conditions of a very cold night on the moon, he will be able to maintain minimal performance due to this. In order to minimize the effects of radiation, it is necessary to use radiation-resistant element base. In order to protect the logically active part of the apparatus and its main nodes from possible failures that may be associated with particles of cosmic rays, it is necessary to duplicate its systems.

Thanks to the Soviet lunar rovers, scientists around the world learned about the cunning of lunar dust. Electrified, moon dust sticks to the solar panels of the device, reducing their impact, which, in turn, does not allow you to fully charge the batteries. According to Alexander Zheleznyakov, academician of the Russian Academy of Cosmonautics, you need to orient the panels so that the dust particles on them fall less. At the same time, there are simply no unambiguous solutions to brush them away. On the "Lunokhod-2" there was just such a nuisance. While driving, the device unsuccessfully tilted and scooped up some amount of lunar dust, which covered its batteries, and then destroyed the device. It is necessary to work on the creation of algorithms that would avoid such troubles.

According to Zheleznyakov, creating his moonwalker "Yuytu", the Chinese probably foreseen such moments. At the same time, the incident with their lunar rover will be taken into account by Russian specialists who are working on the creation of new Russian lunar vehicles. Despite the paucity of information about the state of the Chinese lunar rover, Alexander Zheleznyakov is sure that additional attention of the Russian developers will be drawn to this situation, although he believes that no serious improvements of the devices will follow.

The lunar day has already arrived, the satellite has become warmer. According to plans, 8-9 February 2014, the Chinese lunar rover was supposed to wake from hibernation. Even if this does not happen, Chinese experts will still be able to get the necessary and invaluable experience. In any case, the mission can be recorded as successful, as there were no problems with the lunar rover landing platform, which has its own set of equipment and tools, among which there is an ultraviolet telescope that transmits the first astronomical observations from the lunar surface in history.

Ctrl Enter
Noticed oshЫbku Highlight text and press. Ctrl + Enter
We are
Since the launch of the first artificial satellite of the moon, 50 years have passedRussia is preparing to send three spacecraft to the moon
Military Reviewin Yandex News
Military Reviewin Google News
26 comments
Information
Dear reader, to leave comments on the publication, you must sign in.