Military orders and medals of the Soviet Union. Medal of Nakhimov

February 12 2014
2
The Nakhimov Medal was established on March 3, 1944 by a decree of the Presidium of the USSR Armed Forces simultaneously with the orders of Ushakov and Nakhimov. The medal was naval an analogue of the “land” medal “For Military Merit”, while Ushakov’s medal was an analogue of the medal “For Courage”. The Nakhimov Medal was intended to be awarded for excellence in defending the Soviet Union, as well as actively contributing to the successful completion of combat missions by units and ships of the Navy and border troops.


The Nakhimov Medal was established to reward navy personnel. It was awarded to soldiers, sailors, sergeants, foremen, warrant officers and warrant officers of the Navy, as well as individual naval units of the border troops for their initiative, skillful and courageous actions, which contributed to the successful solution of combat tasks of fleet units and ships in maritime theaters of combat operations. For courage, which managed to show in the protection of the maritime borders of the Soviet Union. And also for the dedication that was manifested in the performance of military duty or for other merits shown during the service in the fleet under conditions that were associated with a risk to life. The medal of Nakhimov was to be worn on the left side of the chest. In the presence of other Soviet medals, she was immediately after the medal "For Military Merit."

The Nakhimov Medal was made entirely of bronze, the shape of the medal is the right circle. The medal was bordered with a side from both the front and back sides. On the front side of the award there was a bosom image of Admiral Nakhimov in profile. Along the circumference in the upper part of the medal was the inscription "Admiral Nakhimov" (all capital letters), in the lower part directly below the admiral's image there was a five-pointed star and two laurel branches. At the edges of the medal there were relief points with the number of 110 pieces. On the reverse side of the medal Nakhimov was depicted a sailing ship, made relief. The image of the sailboat was edged with a ring of cable. The medallion itself was laid on 2 crossed anchors. The ship and anchors were additionally framed by an anchor chain, which passed behind the anchors. On the edge of the award, on the other side were 111 relief points. 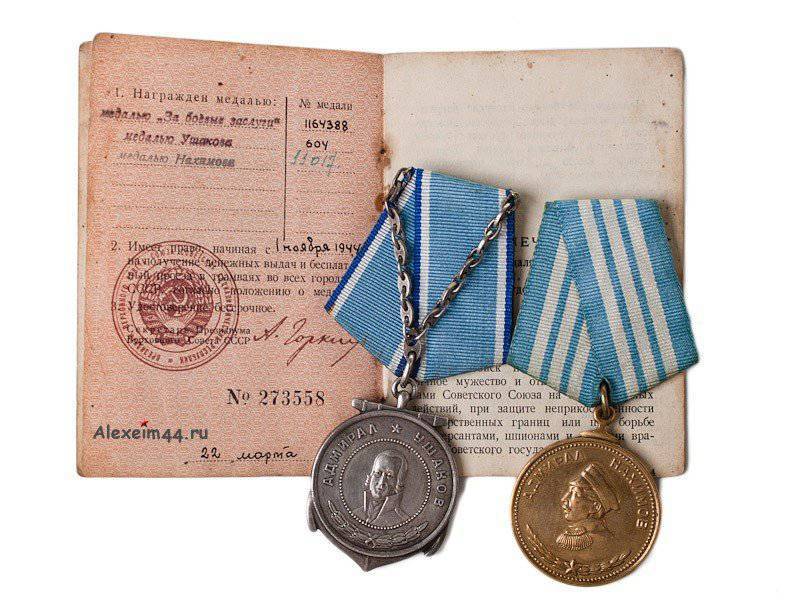 With the help of a ring and an ear, the Nakhimov medal was attached to a standard pentagonal reward block, which was covered with a blue silk moire ribbon, on which were placed 3 white stripes. White stripes ran along the ribbon and had a width of 3 mm each. Between the white stripes there were gaps of blue fabric 2 mm wide, the total width of the silk ribbon was standard 24 mm.

The first medals of Nakhimov were already received by the Red Fleet 10 on April 1944. The first awards were presented in the Northern Fleet. 10 April 1944 of the Red Navy FG Moshkov and E. V. Tolstov, as well as Sergeant M. A. Kolosov (all three intelligence officers) received this medal. The first awards of the Nakhimov medal at the Black Sea Fleet were 20 on April 1944. Among the first to be awarded were Chief Sergeant-Major I. F. Belkin, Chief Executive Officer of the 1-th article, G. I. Belikov, Red Navy Soldier N. D. Belik. In the Baltic Fleet, the first medals of Nakhimov were awarded 26 June 1944 of the year. Their owners were foremen of the 1-th article, V. A. Vasilyev, as well as the Red Navy sailors P. S. Gavrilov and N. G. Vavilkin.

One of the first Soviet sailors who were awarded the Nakhimov Medal was the chief military officer G. M. Davydenko, who came to serve in the Baltic Fleet as early as 1936, according to the Komsomol voucher. In addition to the medal of Nakhimov, he was one of the first to receive the Ushakov medal. During the operation of the defense of the naval base of the Baltic Fleet, located on the territory of the Hanko Peninsula, the boat under his command 11 once landed troops on the island occupied by Finnish soldiers. In 1942-1944, Davydenko successfully completed a 121 combat mission on patrol and convoy ships, minesweeping. Subsequently, for his military achievements, G. M. Davidenko was awarded the title Hero of the Soviet Union. 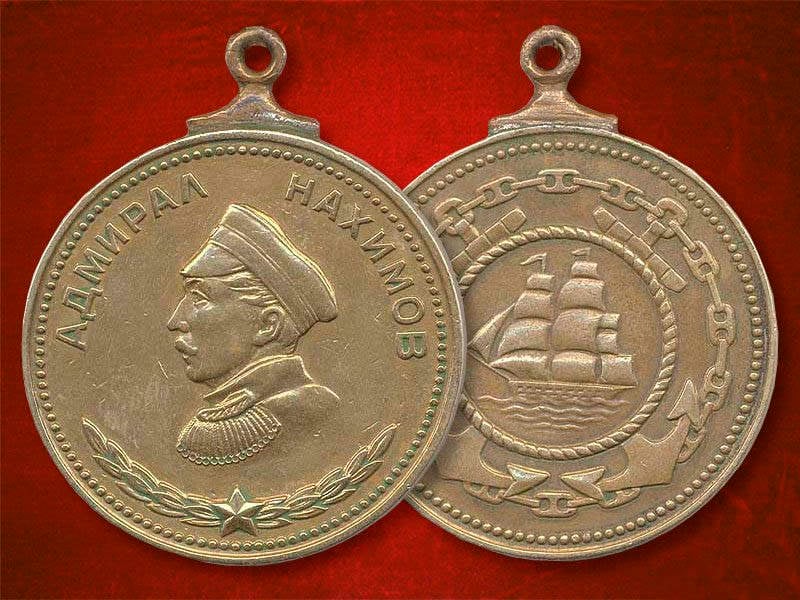 In Soviet stories there were also cases when the Red Navy men re-introduced themselves to the Nakhimov medal. For example, two of these awards were held by the senior sailor of the fleet, Meka Ivan Petrovich, who served on one of the torpedo boats from the Baltic Fleet and was a machine gunner. Also twice to this award were the foremen of the 2-th article of S. A. Shevchenko and G. Trofimenko. Awarded this medal and foreign citizens. For example, 17 July 1945, the Nakhimov medal was awarded 15 to a US Navy soldier.

After the end of the war, the famous fleet admiral NG Kuznetsov recalled that, while on the front lines, he was personally convinced of the pride the Red Navy carried their naval awards. He also repeatedly heard that awarding Nakhimov and Ushakov’s medals to fleet officers was a sign of superior distinction, which indicated their participation in battles along with the rank and file and their personal courage. These awards were especially appreciated by coastal defense artillerymen and marines. For them, awarding medals of Nakhimov and Ushakov was evidence of their belonging and involvement in the Soviet Navy, which sailors were always proud of regardless of whether they had to serve and fight - on land or at sea.

In March 1980, changes were made to the statute of the medal on the basis of a decree of the Presidium of the USSR Armed Forces, which allowed rewarding distinguished sailors in peacetime. By the beginning of 1981, the Nakhimov medal in the USSR was awarded to more than 13 thousand people. By the time of the collapse of the USSR, more than 14 thousands of awards were given out with this combat award.

Ctrl Enter
Noticed oshЫbku Highlight text and press. Ctrl + Enter
We are
"For service and courage" "He was given for courage and loyalty to his native land."Military orders and medals of the Soviet Union. Ushakov's Medal
Military Reviewin Yandex News
Military Reviewin Google News
2 comments
Information
Dear reader, to leave comments on the publication, you must sign in.