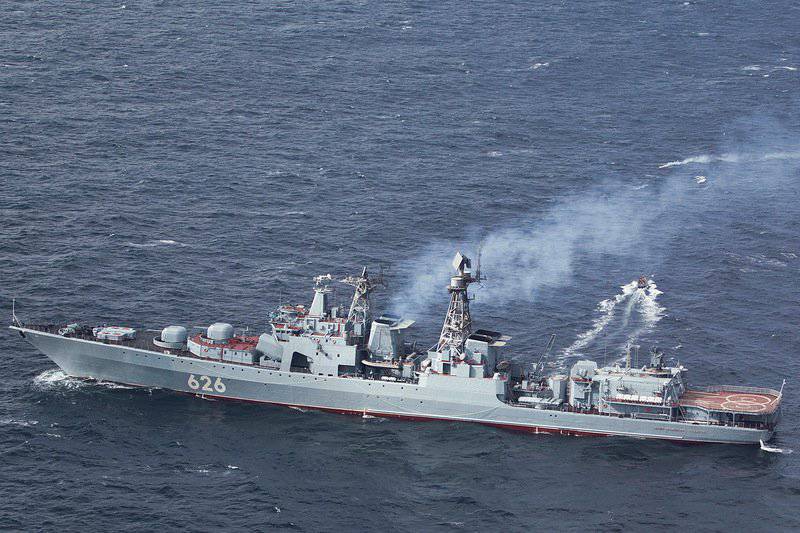 Iran claims its naval ships fleet approaching the shores of the United States. Vessels move along the eastern part of the African coast, and should go to the Atlantic Ocean in the region of South Africa. But the Pentagon is skeptical of Iran, and does not express concern: Washington believes that Tehran is bluffing, while the Islamic Republic is very serious.

Iran has not yet set such an ambitious goal as intimidating the States with the threat of war. Tehran is aware that there is not a single base in the Atlantic Ocean ready to serve the Iranian fleet, and in the event of a military collision, the ships together with the crew will be abandoned to the mercy of fate with all the ensuing consequences, including flooding or captivity.

However, it is still unknown whether the ships really are. A statement on sending the fleet to the US sea borders was made by Afshin Rezayi Haddad, commander of the northern fleet of Iran. His words have not yet been confirmed from independent sources, although the route of the convoy passes through brisk waters, where it is impossible not to notice a huge warship.

Sending the fleet to the American coast is not a military maneuver, but a political demarche. It is unlikely that Iran hopes to create a serious threat to the United States, but it wants to demonstrate to its neighbors that its fleet is in good condition and fully operational. First of all, this should be known in Saudi Arabia and Oman, who at any time can enter into a military confrontation with Iran.

Tehran’s allies must also be confident in the strength of the Islamic Republic, otherwise they may turn away from it in search of better partners and patrons. It is necessary to constantly maintain the image of a strong and ready-for-action state.

Ivan Konovalov, director of the Center for Strategic Conjuncture, suggests that by sending a fleet to the US coast, Iran was hoping to raise its stakes in a big game in the Middle East, and he managed to achieve its goal. Although the words of Afshin Rezayi Khaddad are not confirmed by anyone, Tehran’s ambitious intentions have become “theme number XXUMX” in the world media, and now Iran is spoken of as a country with developed naval forces capable of competing on equal terms with other Gulf States.

It is significant that Iran announced its intention to send the fleet to the maritime borders of the United States back in September 2012. Then Rear Admiral Habibollah Sayari spoke on behalf of Tehran: According to him, the Iranian ships near the territorial waters of the United States would be an excellent counterbalance to the American fleet that entered the Persian Gulf. However, following these loud statements, no concrete actions followed.

The year before, in February 2011, two Iranian warships entered the Mediterranean through the Suez Canal and made a friendly visit to Syria. This event for several weeks became the key topic discussed in the media. Then Iran has achieved the desired effect, in practice, stating the power of its fleet.

From 1979 to 2011, none of the Iranian warships passed through the Suez Canal. Western and Arab media described the expedition of the Iranian fleet as an attempt by Tehran to establish itself in the Eastern Mediterranean, demonstrating its strength to Israel and Saudi Arabia. However, friendship visits did not become something permanent: after 2011, the Iranian naval forces no longer undertook such expeditions to the borders of NATO.

If information on the deployment of Iranian ships to the US coast turns out to be reliable, then it is unlikely that any military clashes could occur between the fleets of Iran and the United States. As stated above, Iran does not have the ability to maintain its fleet located in the Atlantic Ocean, and Tehran understands this. The suicide battle of the Iranian ships with the American Islamic Republic is not beneficial, since the country desperately needs a fleet to protect its territorial waters. On the account - every ship, because next - aggressive neighbors.

A sharp aggravation of the situation and the death of Iranian ships far from the Persian Gulf will inevitably lead to a complication of relations between Iran and the Arab monarchies. Sensing the slack, Saudi Arabia and its satellites may well unleash aggression against Iran, while the American fleet moves to the shores of the Islamic Republic. The destruction of part of the Iranian fleet will allow to transfer military operations to the Iranian coast: a landing is possible with the aim of destroying the infrastructure necessary for the extraction and transportation of oil.

We should not forget that Iran and the Arab monarchies are irreconcilable competitors-producers of hydrocarbons. If we discard the geopolitical games and interfaith confrontation, the conflict between the Islamic Republic and Saudi Arabia will be similar to the struggle between two corporations, which both sell the same product and fight for a place under the sun. That is why the enemy’s energy infrastructure, especially the coastal infrastructure, will become the main target for the armed forces of Iran and Saudi Arabia.

The loss of large warships will result in great trouble for Iran. The fact is that the Iranian Navy has a small number of ships with a large displacement. The basis of the fleet - numerous small ships that can quickly strike and retire. Iranian missile boats can destroy part of the coastal infrastructure in the Arabian Peninsula, but are unlikely to stand in battle against the more powerful ships of the United States, Saudi Arabia, Oman and other states.

Tehran does not need such a scenario.

Therefore, one should not expect the beginning of a serious military confrontation, unless, of course, the States provoke Iranian ships to open fire. The current campaign of the Iranian fleet is symbolic in nature and will help solve problems of a political nature, but not a military one.

The United States, in turn, is also not preparing for a march in the Middle East. Syria, Ukraine, China are on the agenda, and against them the Iranian nuclear program fades into the background. Washington’s refusal of its intentions towards Tehran became apparent after the sides reached some compromises in Geneva, and the sanctions against Iran were partially lifted.

The first step to relieve tensions was the call of Barack Obama to the President of the Islamic Republic, Hassan Rouhani, last September. Interestingly, this telephone conversation was not planned, and took place at such a high level for the first time since 1979.

After this incident, tensions between Iran and the West began to decline. Perhaps this is what the States need in order to free up resources to fight on the rest of the world fronts, especially in Far Asia, where China is gradually building up its military power in the hope of becoming one of the strongest countries in the world. Washington, playing in the Middle East, completely forgot about China, and now urgently forced to make every effort to patch the gap formed.

In such circumstances, Iran is able to afford a lot. Now the fleet does not need to keep all the time near its coast in anticipation of an attack from the sea, and several warships can be safely sent on a long voyage somewhere to the shores of North America. The remaining boats fully cope with the tasks of protecting the sea border.

Thus, the Islamic Republic skillfully uses the problems of the United States in Far Asia. Strengthening China is beneficial to Tehran: few people will pay attention to the Iranian nuclear program when China is rearming, and besides, the West is experiencing difficulties in Syria and Ukraine. These are the states in the next six months that will become priorities for Brussels and Washington. In such conditions, the Iranian naval campaign in the Atlantic Ocean will get away with Tehran: the West simply has no time to deal with Iran, it has problems and is more relevant.

Ctrl Enter
Noticed oshЫbku Highlight text and press. Ctrl + Enter
We are
Iran: the fight against double standardsIran on the way to the creation of the Shiite caliphate
Military Reviewin Yandex News
Military Reviewin Google News
50 comments
Information
Dear reader, to leave comments on the publication, you must sign in.