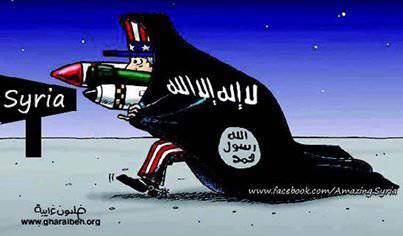 In the province of Daraa 8 February, terrorists killed the head of the administration of the village Kafra Ali Muhammad Al-Ghazali. An explosive device was attached to the bottom of his car. Al-Ghazali himself died on the spot, his 14-year-old son was seriously injured. Persons involved in the crime were arrested, and local residents helped law enforcement agencies to find the killers.


In the same province, terrorists attempted to plant an explosive device on the road to the village of Khirbet-Gazal. As a result, the "hellish car" exploded just at the moment when the attackers were preparing it for other people. Several gangsters died.

In eastern Syria, in the city of Kamyshly, in the Cornish residential quarter, a bomb was launched, which the terrorists attached to the bottom of one of the cars. As a result, one citizen was killed and three were wounded.

9 February a group of militants attacked the peaceful village of Ma'an in the province of Hama. They set fire to houses, killed people on the streets, broke into their homes and committed atrocities. At the very least, the victims of the attack were 10 women. Over their bodies then mocked.

In the very center of Damascus on this day, gangsters fired a city administration building with a mortar - two citizens were injured. In the city of Hama, a mined motorcycle was blown up on Al-Asa Square. One person died, six were injured.

In the meantime, the second round of negotiations between the Syrian official delegation and the group representing the "opposition" begins in Geneva. More precisely, not representing. Since members of this group are associated exclusively with external forces. They do not have much influence even on the majority of armed groups.

One example of this is the situation in Homs. During the first round of negotiations, the issue of the humanitarian situation was touched upon in several blocks near the Old City, where terrorists are located, holding many civilians as human shields. (However, the opposition itself interprets the situation differently, blaming the government for the difficult humanitarian situation and believing that these people are among the militants voluntarily. But why then do many of these civilians want to evacuate from there?)

Official Damascus said that the humanitarian situation should not be considered only in one place in Syria - attention should also be paid to all other parts of the country where the situation was also difficult. First of all, it is the working town of Adra in the province of Damascus, as well as the villages of Nubble and Zahra in the province of Aleppo, which are under the blockade of terrorists. (Let me remind you - a few months ago, terrorists even shot down a helicopter with teachers who were sent to take exams for children of these villages. As a result, the teachers died, but the patrons of the “opposition” did not condemn the monstrous crime against representatives of one of the most peaceful professions).

But the “opposition”, and after it the “world community” (whose voice the USA and their allies arrogated to themselves) spoke only about the situation in Homs - that is, about the need to bring food to where there are not only civilians, but also militants as well as their family members.

The ATS government has agreed to this on the condition that persons wishing to leave these quarters can do so. An agreement was concluded between the governor of Homs Talal Al-Barazi and the UN Permanent Representative in Syria Jakub al-Hel.

However, over the next two days, the militants did everything to prevent the implementation of the agreement. According to Al-Barazi, this was due to the fact that not all armed groups supported the agreement.

From this example, it is clear that the “opposition” does not have control over all the gangs, and they can try to sabotage any initiative on the ground.

8 February when trying to smuggle humanitarian aid into the old city of Homs, the convoy was shot at. Four employees of the Syrian Red Crescent Society who tried to smuggle food were injured. And only half of the cargo was delivered. On this day, the terrorists did not allow to release from the encirclement of a single civilian.

However, the second round of negotiations in Geneva starts. According to the head of the Syrian government, Vail Al Khalki, the official delegation of the UAR headed for Geneva with the same patriotic goals as for the first round. He added that the negotiations are a long and difficult process, but expressed the hope that the delegation of Damascus, following the instructions of President Bashar Al-Assad, will succeed in the negotiations.

Unfortunately, the problems of the second round remain the same as they were during the first. As before, the delegation of the “opposition coalition” consists of only one small group of people; representatives of the internal political opposition were still not allowed into it. The fact that the United States is hindering the participation of this part of the opposition in the negotiation process indicates that they are trying to get the Geneva-2 conference to a standstill. In addition, the negotiations are not facilitated by the fact that terrorist crimes are not condemned at the international level. Impunity of bandits gives rise only to new violence.

Despite this, the Syrian delegation will continue to participate in the negotiations and put forward constructive proposals. As the first round showed, these constructive ideas are rejected by the opposite side. But at the same time, an increasing number of people understand the essence of this “opposition”, which does not need peace. Syria, once again, has the opportunity to speak out on the world stage.