Steven Seagal: Alpha is one of the best special forces in the world. 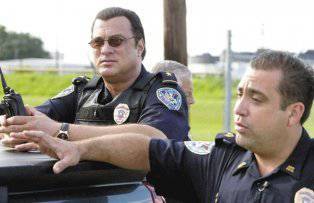 On the eve of the Olympics in Sochi in the West began a real massive information campaign. Its goal is to boycott the Games, if not disrupt, creating an extremely negative image of Russia. And the more valuable was the position taken by the Hollywood star and the “cult personality” in general - Stephen Seagal.

The grim security scenario in Sochi offered Mike Hackaby, a conservative politician, to viewers of his talk show on Fox News. The one that claimed the presidency of the United States from the Republican Party in 2008. The script mingled “horses, people”: a wanted suicide bomber, and the threat of militant attacks, and “anxiety” on US warships plying near the Black Sea coast.

But Stephen Seagal, an actor and martial artist, guest of the show, did not accept the proposed “black ink” version of Hackaby and did not support the tale of the “black Russian room”. He estimated the likelihood of terrorist attacks in Sochi as “extremely insignificant”, referring to his contacts in the Russian power structures.

At the same time, Seagal remarked, as it were, by the way, that absolute security is simply impossible. You, they say, will go to the store, and suppose you are hit by a car. How do you like that?

“The chances that suicide bombers will be able to achieve their goals are extremely small, since the highest vigilance regime has been introduced in Sochi,” retorted the leading famous actor. - President Putin is doing everything possible. And I want to note that the FSB and special forces "Alpha" are truly some of the best in the world. So the terrorists will have a very hard time. ”

Here it should be noted that "Alpha" is the hallmark of Russia, its brand from the Special Forces. That does not detract from the other special units. Their exceptional courage and professionalism have allowed in recent months, and especially after the three terrorist attacks in Volgograd, to inflict a grievous blow to the gangster underground.

Not without losses among the special forces ... And honoring the winners of the Olympiad, seeing how our flag raised to the sounds of the Anthem once again, we will remember those who gave their lives for peace and security in southern Russia. For the safety of the whole country.

Representing Steven Seagal, the show host ironically called him “an unofficial envoy who struck up friendly relations with Russian President Vladimir Putin, that is, he did what our president is not able to achieve.” By the way, Barack Obama is one of those world leaders who is not going to attend the opening of the Winter Olympic Games in Sochi.

Whether Steven is friends with Vladimir Putin is unknown, but he has a photo in the company with the Russian president. And the opinion, one’s own, distinct from the clichéd views on Russia, is also available! “Putin,” Sigal believes, “has practically single-handedly turned Russia into a surprisingly powerful power, actively developing economically, despite the obstacles. He re-created foreign policy relations, which, frankly, are impressive. ”

And in March last year, Deputy Prime Minister Dmitry Rogozin invited him to take part in the campaign to promote the Russian rifle weapons in the US market. Namely - in the arms exhibition in Las Vegas, where Seagal could advertise the products of the Kalashnikov concern.

An interesting person is Steven Sigal ... He would be a politician, not an actor, you see, and the relations between the two powers would warm. Seagal - not a snob and not a supporter of extreme measures. He believes that Russia is a powerful country with enormous resources and is convinced that "these are our friends." And one day he foresaw that for America there is the only way to survive and not be swallowed up by other superpowers ... Which one? “The recipe from Seagal” is simple: to be in good relations with Russia, because Russia can be an outstanding ally.

Who were the ancestors of the famous American, it is not known for certain. History mysterious and ambiguous. According to Segal himself, his mother was a foundling - she was found near the porch of someone else's house in a shoe box. Patricia Seagale is supposed to be Irish; Stephen Seagal's father, Samuel Steven, is a Jew. Samuel's parents, Nathan Siegelman and Dora Goldstein, came to America at a tender age from St. Petersburg.

According to the actor, his grandfather came from a certain Buddhist region of Russia. Surprisingly, in childhood, the boy was told that the grandfather was a “Mongol” and this is confirmed, as Seagal tells, the photos of his grandfather and his family — slanted eyes, dark skin, Mongolian hats ...

From where only Mongolian, Buryat or Tuvinian have the exotic name Nathan is not clear. Although one glance is enough to admit: some eastern blood is clearly present in Seagal. He himself, surprisingly, considers himself Russian.

“I have Russian blood in me,” he stresses, “my grandmother is from Vladivostok. There are roots in St. Petersburg, one of my ancestors was born in Ukraine, which I consider to be a part of Russia. So I am Russian, I love Russia, I love Russian people, and I love President Putin. I really like the fact that he is providing great support in the development of martial arts in Russia. He has done a lot for the development of sports in the country so that children have the opportunity to practice martial arts with the best coaches. ”

And Seagal dreams to travel around Siberia, the last, as he says, "really wild region in the world." Well, he and cards in hand! It will be later in prime time telling Americans about the beauties of Russian nature, nature reserves, ancient trees and the hospitality of the locals. After all, he is Russian, which, you see, “explains a lot”.