Nezavisimaya Gazeta: Anatoly Serdyukov was awarded the title Hero of Russia. Back in March 2012 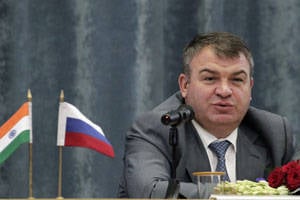 If the criminal case against the former Minister of Defense Anatoly Serdyukov, instituted in November 2013 of the year, will go to court and his guilt will be proved on the grounds of the crime under Article 1 Art. 293 of the Criminal Code (negligence), he is unlikely to sit behind bars. The maximum penalty for this crime is correctional labor for up to one year. But this is unlikely to come. Sources of "NG" in law enforcement agencies argue that Anatoly Serdyukov, it turns out, is a Hero of Russia and a veteran of hostilities. Holders of the highest award of the country are not exempt from criminal liability, but the court takes this into account as a mitigating circumstance.


Rumors that Anatoly Serdyukov, like the ex-chief of the General Staff Nikolai Makarov, is a Hero of Russia, are actively circulating in some veteran organizations. It is alleged that the former head of state Dmitry Medvedev awarded the Star of the Hero of the former Minister two years ago. 20 March 2012 Medvedev as Supreme Commander attended the final board of the Ministry of Defense for him as president, where the “secret” award was made. Then, at the collegium, the president gave a high assessment to the activities of the leadership of the Ministry of Defense, saying that “the reform of the Armed Forces is almost complete. But only information about Makarov awarding was leaked to the press.

The chairman of the association of reserve officers of the Armed Forces “Megapir”, Major General of the Reserve Vladimir Bogatyrev, who once served in senior positions in the Ministry of Defense, believes that Serdyukov was awarded the same decree as Makarov. “This document, signed by Dmitry Medvedev, was“ closed ”. And awarded them indoors, away from prying eyes. But a certain circle of people in the Ministry of Defense, the Kremlin and society, of course, knew about this, ”he says. - These people were awarded allegedly for services to the Fatherland for their great contribution in matters of reforming and modernizing the army. Now, when many of the directions of these reforms by the new leadership of the Ministry of Defense have been recognized as wrong and canceled, the question arises how justified it was to evaluate the activities of Serdyukov and Makarov in this way. The fact of awarding these people with the Star of Hero is no longer a secret for many officers in the Ministry of Defense. And everyone wonders: why was this done? ”

The hero of the Soviet Union, the chairman of the Union of Russian Paratroopers, Colonel-General Valery Vostrotin believes that, in comparison with the Soviet period, the title of Hero in the country is largely depreciated. The veteran underwent the crucible of Afghanistan, was twice wounded, in 1979, he personally participated in the storming of the Amin Palace. The title of Hero in 80-ies received only "on the fourth run." “Four times they sent an idea to me,” recalls the general. - The last time even came to the Supreme Council. It was such a sieve. Today, unfortunately, I’m watching: they substitute the president, discredit the title of Hero of Russia, handing it out to everyone. Serdyukov - Hero of Russia! What is it like?"

Two years before becoming a Hero, Serdyukov twice refused to sign a presentation on awarding this title to his subordinate cosmonaut Maxim Surayev, who spent six months in near-earth orbit. Commenting on this fact, twice Hero of the Soviet Union cosmonaut Georgy Grechko stated that such actions of the Minister of Defense are illegal. “Honestly, when I read what is happening today under the auspices of the Ministry of Defense, I do not understand what is happening. Sometimes it seems to me that I "went to the roof," - said at that time the honored astronaut. It’s hard to imagine what will happen to Georgy Grechko’s “roof” when he learns that Serdyukov is a newly-minted Hero of Russia. Why and for what merits it was done, apparently, we will not know soon.

Hero of the Russian Federation