The military will receive housing only for mortgages 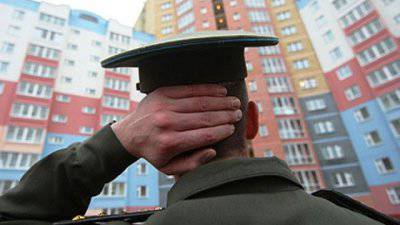 The Defense Ministry expects that in ten years military mortgage will become the only form of providing the personnel of the army with its own housing.

According to him, the last two years there has been a steady growth trend of participants in military mortgages. If in 2012 there were 107 thousand people there, then in a year - already 128 thousand. Now the maximum loan amount that an officer can take on a home purchase and pay off on average for 16-17 years is 2,4 million rubles. "Given the savings, this allows servicemen to buy an apartment for 3-3,5 million," said Pirogov. He clarified that the housing certificate amounts are more modest: in the region of one and a half - two million rubles. According to the head of the department of the Ministry of Defense, last year, thousands of apartments were bought with the help of military mortgages throughout Russia.

The main participants in this housing program are young officers. But the bet on the "apartment" certificates are mainly made by military retirees. Very often for them the only way to housewarming is precisely through the SHC. Otherwise, it is simply impossible to finally part with office living space in a military camp. But current officers and ensigns are often asked to issue certificates to them.

Sergey Pirogov said that this year the Ministry of Defense hopes to provide them with 1100 people. For the acquisition of SHC, the Ministry of Construction plans to allocate a billion rubles to the defense department 2,4. At the same time, the total number of military personnel who need certificates, according to Pirogov, is 4 thousands of people. "Of these, 2,3 thousands are residents of closed military camps. For them, the SHC is the only way to provide housing," the official said. It turns out that the housing certificate will get only one in four of those in need of it. Of course, this does not suit the situation of army quartermasters.

- We do not stop. The corresponding letter from the Ministry of Defense to the state customer sent. We continue meetings with the leadership of the Ministry of Construction in order to solve this problem, the director of the department stressed. He added that part of the military, with the exception of residents of closed military camps, can be provided with housing in other forms, for example, with the help of a military mortgage or a lump sum for the purchase of an apartment.

Recall that from this year, the military personnel can buy or build housing with a lump sum payment. The rules for calculating such subsidies are approved by Government Decree No. 76 of February 3. Chairman of the Commission of the Public Chamber of the Russian Federation on National Security Alexander Kanshin called the new practice the first important step to solve the housing problem of the military in general.

- I recently had the opportunity to discuss this topical topic with Deputy Minister of Defense Ruslan Tsalikov and the head of the Department of Housing Support of the Ministry of Defense Sergey Pirogov. We decided in March to once again consider in the Public Chamber all issues related to the provision of housing for military personnel, ”Kanshin said.

Frants Klintsevich, Deputy Chairman of the State Duma Committee on Defense, considers it very important that “with the announced calculation of the size of housing subsidies, the maximum possible payments for these purposes were established for the families of the dead and deceased servicemen, including during the fighting”.

But his colleague, the chairman of the core committee of the lower house, Admiral Vladimir Komoyedov, said that the Defense Ministry was quick to announce that after the introduction of housing subsidies, they would no longer finance the construction of permanent housing for regular military personnel.

- In December last year, we adopted a high-profile law that allows contract servicemen to obtain permanent housing for social ownership through military mortgage and obtain a housing certificate for housing construction in any region of the country. Thus, any officer or contractor has the right to choose when solving the housing issue. Including, it can be provided with the apartment constructed by the Ministry of Defense, - the deputy declared.

Ctrl Enter
Noticed oshЫbku Highlight text and press. Ctrl + Enter
We are
The action “Military service under the contract is your choice!” In Rostov-on-Don: future contract servicemen, exhibitions and “Russian Knights”
Military Reviewin Yandex News
Military Reviewin Google News
29 comments
Information
Dear reader, to leave comments on the publication, you must sign in.