Who will help Ukraine? 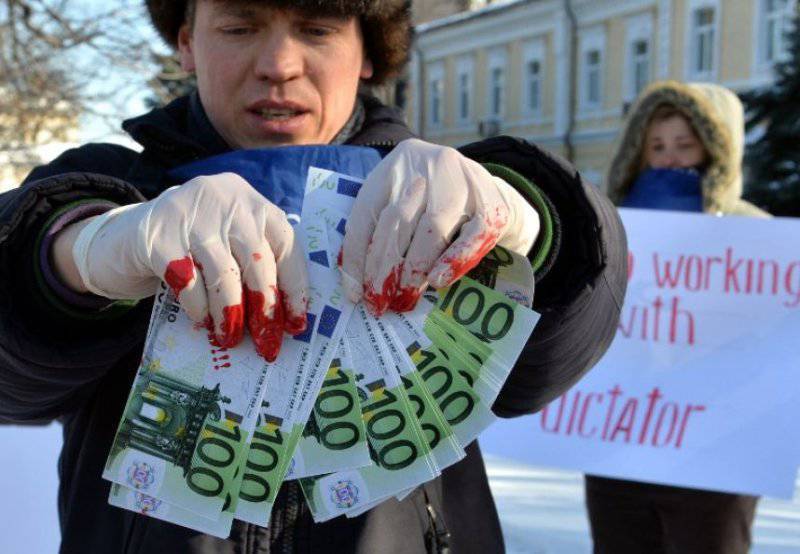 In the light of recent events, it becomes obvious that the West is apparently ready to make the most in order to lead Ukraine out of the zone of influence of Russia. Under the pressure of the current situation, the head of the Ukrainian state, V. Yanukovych, is even ready to announce the holding of early elections, not only parliamentary, but also presidential, in the event that it is not possible to agree with the opposition. According to the president, this will be the only possible democratic way to resolve the conflict. In addition, Yanukovych completely excludes the possibility of using force to resolve the situation and impose a state of emergency in the country.

It is obvious that such a step of the president will allow the opposition to come to power in the foreseeable future. Previously, this option was mainly associated with the crisis of the Ukrainian economy due to the fact that Russia will cease to provide Ukraine with financial support. However, currently this option is no longer relevant.

And the thing is that the West (in particular, the United States of America and the European Union) is developing a plan of "financial assistance" to the Ukrainian state. At least, this was told by the head of the Ministry of Foreign Affairs of the European Union, Catherine Ashton. She stated that it is not only about direct financial investments, but also some other events, including guarantees of the stability of the Ukrainian national currency and ensuring future investments. However, the West is ready to give money not for “just like that,” he put forward a number of certain conditions.

As a matter of fact, no one expected it to be any different. So, Ukraine will receive money only if the authorities embark on political and economic reforms. At the same time, neither Washington nor Brussels do not yet name the exact amount of possible assistance, only casually mentioning “big money”. By the way, the leaders of the Ukrainian opposition are confident that in order to stabilize the situation in the country, 15 will be enough billions of dollars.

We note: it is precisely this amount that V. Putin promised to give to the Ukrainian president in the event of a refusal of European integration. If the West is ready to give the same money, then the Russian proposal to some extent loses its appeal. Well, in a pinch, it ceases to be exclusive. Moreover, the West in the person of S. Füle already offered something else today: in the future, he is allegedly ready to fully integrate the Ukrainian state into the European Union (but, again, no specifics regarding the timing of the fulfillment of this promise).

Thus, the West offers Ukraine money, free elections and the prospect of European integration. But is this really the case and is it true that Russia is losing in the struggle for Ukraine?

According to the MSU employee Alexei Vlasov, it is not at all that the West is ready to immediately give Ukraine money. He sets a condition - political and economic reforms, that is, in essence, the EU representatives returned to the positions that were held before the signing of the association agreement. The only thing that at the moment the European Union and America have promised Kiev are a deeper European perspective, which, as the expert noted, is not specific and is propaganda and psychological rather than practical.

Vlasov is convinced that all the promises of the West are attempts to support the Ukrainian opposition in terms of information. However, there are many unresolved issues, in particular, this one: can the Ukrainian economy be able to transfer these structural reforms? After all, she is not ready for them at all.

Of course, in theory, the Marshall Plan is possible in relation to Ukraine, but in practice it is extremely difficult to implement, because there are a lot of funds to be invested in the Ukrainian economy, but where are they from the EU? Therefore, in this situation, representatives of the EU are doing quite well: they talk about the possibility of investment only if Kiev observes a number of conditions. But at the same time, both sides understand that now giving money to Ukraine is simply throwing it away. Thus, it becomes obvious that in reality no credit should be expected from the West.

Speaking about whether Russia will provide financial support to Ukraine in the event of a change of power there, Vlasov said that Putin understands that in this case (being in power), the Ukrainian opposition will themselves refuse Russian assistance (for ideological reasons) and will not extend the deadline the agreement signed by N. Azarov. Therefore, the Russian head of state says so calmly that Russia gives money to the Ukrainian people, and not to the government at all.

Vlasov spoke about the statements of V. Yanukovich about the possibility of holding early elections in Ukraine. In his opinion, the whole thing is in the possibility of returning to the Constitution of 2004 of the year. If this happens, and Ukraine will again become a parliamentary-presidential republic, the election of the head of state will not play a big role. That is, Yanukovych is not trying to give up power at all, he wants to move the struggle to a slightly different plane. The Ukrainian guarantor, according to Vlasov, is well aware that he has no other options besides the use of force to resolve the conflict. Therefore, he is trying to arrange everything in such a way that the opposition already had to make a decision on what is more important - the presidency or the parliament. Moreover, it will be very difficult for the opposition forces to reach a coalition agreement. Thus, an attempt at a political maneuver is obvious, but time will show how successful it will be.

The expert also noted that at present, the East and South-East of the country do not have a clearly developed ideology that could oppose the radical ideas of the West. Therefore, residents of these regions have several options: either join the West, or become victims of a coup, which began to spread to the eastern regions.

Therefore, it is quite possible to hold early presidential elections in the spring and summer of this year. And then ... If a force is formed in the Ukrainian East that can withstand radical nationalist sentiments, the struggle is only beginning. Otherwise, it is safe to talk about the deep systemic victory of the Ukrainian opposition.

At the same time, the rector of the CIS Institute, M. Frolov, is confident that in this situation the Ukrainian president’s habit of maneuvering between two opposing sides - Russia and the EU - is to blame. If Ukraine holds early presidential elections, Yanukovych will definitely lose them. The expert also stated that he does not exclude even the possibility of Y. Tymoshenko’s victory in these elections and the placement of Yanukovich in prison.

Therefore, I am sure Frolov, the Ukrainian guarantor is currently at a crossroads, wondering how it would be more profitable to hand over power. The President of Ukraine no longer controls the situation, it was necessary to act much earlier and much more rigidly — simply to disperse the Maidan. But he showed weakness, for which he is now paying the price ...

At the same time, Frolov noted, even if the opposition wins, Kiev will receive neither membership in the European Union nor European money. Representatives of the West are well aware that Ukraine will need a lot of money, so they are politely denied loans: they say, we will give money, only first you invest your money and carry out reforms. In addition, the EU is currently full of its problems, because it is necessary to save Greece and Spain from the crisis. In addition, it is necessary that the Ukrainian institutions are brought to European standards, and this cannot be done in one year. Thus, Frolov summed up, all the statements of the West are nothing more than a diplomatic game ...

This is partially confirmed. Catherine Ashton's bold statements about the possibility of lending and about large sums were refuted, but in a soft, diplomatic form. Jen Psaki, a representative of the State Department, said that all the talk about the possibility of financial assistance to Ukraine were preliminary and that no decisions have been made so far. In a more rigid form, he refuted the words of Ashton and the head of the European Commission, Durán Manuel Barroso, who recalled that no one had promised to pay Ukraine only for signing the association agreement.

Thus, instead of money and real help, representatives of the European Union propose to show Kiev the prospects for joining this very union. It seems that they seriously think that the Ukrainian people will buy into such vague and ambiguous wording so easily. In addition, it is obvious from Washington’s statements that he does not intend to render assistance to Kiev even if opposition forces come to power. The West proposes that Ukrainian oppositionists start negotiations with the International Monetary Fund from scratch and, for their successful completion, fulfill a number of requirements (in particular, to reduce social programs).

Thus, the Ukrainian people have to decide what is more important in this case: the promises of Western politicians about the illusory possibility of European integration or the real loans received from Moscow.

Ctrl Enter
Noticed oshЫbku Highlight text and press. Ctrl + Enter
We are
Situational analysis of the death of the MH17 flight (Malaysian Boeing 777), made on the basis of engineering analysis from 15.08.2014Syria: Americans scare themselves, and Asma Asad buys chairs
Military Reviewin Yandex News
Military Reviewin Google News
45 comments
Information
Dear reader, to leave comments on the publication, you must sign in.