February 10 2014
13
10 February 1814, the battle of Shampober occurred. This was the first battle of the so-called. “Napoleon’s Six Day War”, when the French emperor defeated the Allied forces in four battles and took the strategic initiative into his own hands. The French emperor took advantage of the scattered position of the corps of the Allied Army, which was moving to Paris, and, under the town of Shampober, defeated Olsufyev’s 9 Infantry Corps from Blucher’s army.

21 January (2 February) 1814, after winning the battle of La Rothiere (The Battle of La Rothiere), a military council was held, at which the allies decided to continue the offensive on the French capital. In this case, it was decided to continue to move two separate armies. Schwarzenberg and Blucher did not want to obey each other. Moreover, it was easier for the troops to "feed" from the ground. At that time, most of the food was requisitioned from the local population. The main army under the command of Austrian Field Marshal Schwarzenberg was to move along the Seine Valley. Russian-Prussian corps attacked Paris north through the valley of the River Marne.

Due to the slowness of the Main Army under Schwarzenberg (the Austrians had their plans and did not want the complete defeat of Napoleon), the French army was able to recover from the defeat at La Rothiere. Until February 6, Napoleon’s army quietly restored forces from Troyes, received reinforcements. Then the French moved to Nogent. 40-thousand The army under the command of the marshals of Victor and Udino was left a barrier against Schwarzenberg's army.

At that time, Schwarzenberg made no headway, made extra, not quite understandable maneuvers; as a result, the Main Army advanced extremely slowly. Blyukher, eager to occupy Paris and repay the French for the occupation of Berlin, rushed forward. Russian-Prussian troops pursued MacDonald's weak corps, planning to cut it off from Napoleon’s main forces. The army of Blucher pushed McDonald's forces. But in the process of movement of its body were scattered at a considerable distance. Moreover, because of the lack of cavalry, the headquarters of Blucher did not know about the movements of Napoleon's troops. There was a gap between the main army of Schwarzenzeng located at Troy and the army of Blucher.

Napoleon decided to strike at the smaller army of Blucher. Her corps were distant from each other. In addition, the army of Blucher came closest to Paris: it was about 100 km to the French capital. French troops made January 28 (February 9) from Nogent. On the morning of February 10, Napoleon's army united with the body of Marmont, and on the march crossed the Saint-Gondi swamps, and went out to Shampober. French troops were between the corps of the army Blucher. Napoleon hoped to crush the body of Osten-Sacken. However, the troops of Saken 9 February came from Monmiril and were already at Laferte-soo-Joir. In the district of Shampober there was only a small corps of Zakhar Dmitrievich Olsufyev. 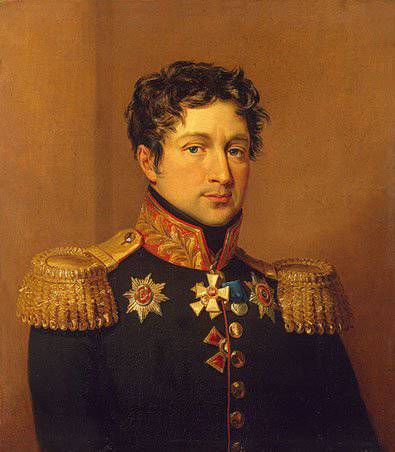 Forces of the parties and the location of troops

The 9 th infantry corps of Lieutenant General Olsufyev was greatly weakened by previous marches and battles, it included only about 3,7 thousand soldiers with 24 guns. Thus, the 9 Infantry Corps was corps only in name. He was weaker than even a fully equipped division. Olsufyev had absolutely no cavalry. The headquarters of the army Blucher located in Berger near Verteu. Here, the Prussian warlord was waiting for the approach from the Rhine of the Prussian corps of Kleist and the Russian 10 Infantry Corps of Kaptsevich. The beginning of their approach was expected from February 10. However, due to bad roads, the spring thaw began, and the forces of Kleist and Kaptsevich were late.

Prussian 18-th. Corps under the command of General York, he directly pursued the troops of MacDonald, reached the Marne and stood at Chateau-Thierry. Russian 14-thousand The body of Osten-Sacken advanced furthest to the west and was located near Lafert (about 75 km from Paris).

January 28 (February 9) the French occupied Cezanne. The Cossacks of Karpov, who were stationed at Cezanne, retreated to Monmirale, joining the forces of Saken. The general considered that this is a small French detachment. In addition, Saken believed that the troops were protected from this direction by the obstruction of the marshy valley of the Peti-Morin River.

Marmont with the Lagrange division and cavalry Doumerka still 8 February occupied the bridge at Saint-Prix. However, the whole army was in Cezanne and Marmont, seeing the inconvenience of the road to Shampober and fearing there to face superior enemy forces, stepped back. The road from Cezanne to Monmirale was even worse than to Shampober, so Marmon suggested that Napoleon go to Lafert to connect with Macdonald. However, Napoleon, having learned from the report of Marmont that you can go to Shampober, decided to move the whole army there. People and horses were gathered from the area to help the army move through the swamps between Cezanne and Saint-Prix.

Olsufyev received from the forward posts a message about the appearance of a strong enemy convoy on the Cezanne road. However, Marmont’s troops retreated, so the appearance of the French did not alarm Olsufyev. On the river did not even destroy the bridge at Saint-Prix.

At dawn, the French troops moved from Cezanne to Saint-Prix. Marmon was at the forefront with the 1 Cavalry and 6 Infantry Corps. The rest of the troops followed them. The march through the marshes was heavy, but the peasants and their horses helped out the army. 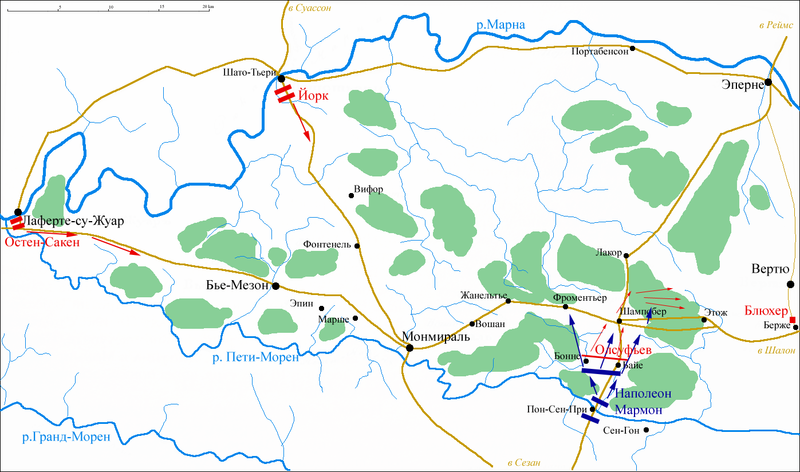 On the morning of February 10, Olsufiev received news of the appearance of significant enemy forces from the south along the road from Cezanne. The corps commander sent General Udom with the Chasseurs regiments and 6 guns to occupy the village of Bayeux in front of Shampober to counteract the enemy, whose numbers and intentions were unknown.

In 9 hours, the advanced forces of the French army attacked Udom and constantly increased the pressure. The first attacks of the French were repulsed. Olsufyev was forced to enter into battle all the forces at his disposal in order to withstand the onslaught of the enemy. Russian troops were located between the villages of Bayeux and Banne. Around noon, the French emperor himself arrived on the battlefield with a guard. The French attacks resumed with a vengeance, and soon the village of Bayeux was in the hands of the enemy. Then the French captured and Banne.

Napoleon, having met stubborn resistance of insignificant Russian troops, decided that these were advanced forces of a more powerful force. Therefore, instead of a strong frontal attack, which would have led to the rapid defeat of the Olsufyev's corps, he made roundabout maneuvers with the aim of cutting off the likely paths of retreat of enemy troops eastward to Etozhu and westward to Monmiraly. Slush slowed down the movement of French troops.

Olsufyev did not have cavalry, but nevertheless it was clear that soon the French would simply bypass the Russian flanks and the corps would be surrounded. Olsufiev gathered a military meeting. All the commanders spoke in favor of withdrawing to Etozh and further to Werth, to the headquarters of Blucher, where the corps of Kleist and Kaptsevich were supposed to be. However, Olsufiev had the order of the commander, according to which he was to defend Shampober to the last as a settlement that connected Blucher’s headquarters with the rest of the army. In addition, Olsufiev was hoping for help from Blucher. Therefore, Olsufiev decided to fight back further.

Having lost Baye and Banne, the Russian troops retreated to Shampober. Noticing the movement of the enemy’s forces across the road leading to Etozh, Olsufyev led most of the troops to the highway. The brigade of Major General Poltoratsky (Nasheburgsky and Absheron regiments with 9 guns) received an order to the last to stay in Shampober. The French, exaggerating the forces of Poltoratsky, put up large batteries and opened heavy fire on the village. The soldiers of Poltoratsky repulsed several cavalry attacks. But when it began to get dark, they ran out of ammunition. Russian soldiers were forced to fight back with bayonets. Poltoratsky, cut off from the rest of the corps, built the remaining soldiers in the square and began to retreat into the forest, located two versts from the village.

The French twice offered the Russians to surrender, but were refused. Then they put forward horse guns and began to shoot the vehicle. In addition, the enemy prevented the Russians, and the forest was occupied by arrows, which opened heavy fire on the square. Simultaneously, the attack resumed the French cavalry. Surrounded on all sides, showered with grapeshot and a hail of bullets, repulsing cavalry attacks, Poltoratsky's troops were partially destroyed, partially captured, some of the soldiers were able to get through to their own. French guns seized. Poltoratsky was wounded and captured. 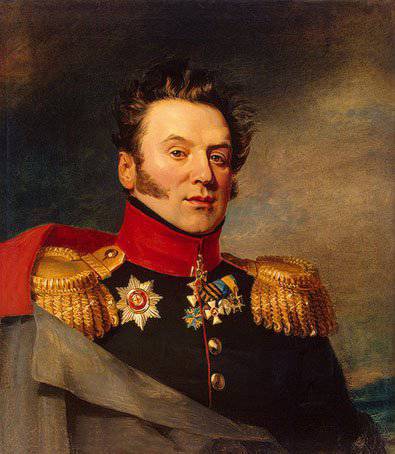 Olsufyev at that time tried to retreat to Etozh, but the road was cut, so the Russian troops moved along the road on Epernay to make their way to Lakor and make a detour to Monmirah. There Olsufiev hoped to connect with the body of Osten-Sacken. However, during the movement, the Russian troops were attacked by the division of Ricard and Dumerian cuirassiers. Having spent all the bullets and fighting off their bayonets, Olsufyev’s troops were completely upset. Olsufiev himself in the confusion of a bayonet battle was wounded and captured.

The command was assumed by the intrepid commander of the 15 division, Major General Pyotr Yakovlevich Kornilov. Together with General Udom he decided to fight to the last drop of blood and not to surrender. Collecting the remains of the corps in a fist, Kornilov and Udom bayonets made their way to their own. Kornilov brought about 1700 people, along with the wounded. The corps kept the remaining guns and all the banners. 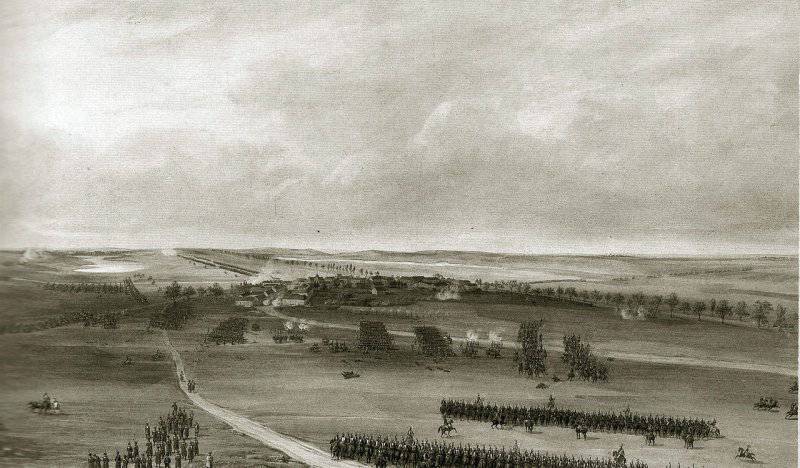 Russian troops lost about 2 thousand people killed and captured. 9 guns from 24 were lost. Wounded generals Olsufiev and Poltoratsky were taken prisoner. The French lost about 600 people.

Russian troops retained their honor and glory, in this battle they once again made an immortal feat, fighting a small detachment with the whole army of the enemy, which was led by Napoleon himself. The French emperor invited Olsufyev to his office, but since he spoke little French, they brought Poltoratsky. When he announced the number of Russian troops, Napoleon at first did not believe: “Nonsense! Can not be! There were at least 18 thousand people in your corps. ” Poltoratsky replied that the honor of a Russian officer does not allow him to lie, his words are true. They can be confirmed by other prisoners. Napoleon said: “If this is true, then, to be honest, some Russians know how to fight so hard. I would say that you were at least 18 thousand people. "

February 11 Napoleon, leaving the body of Marmont as a barrier against Blucher, moved to Monmiraly. He was going to attack the body of Osten-Sacken, who at that time moved to the aid of Olsufiev. 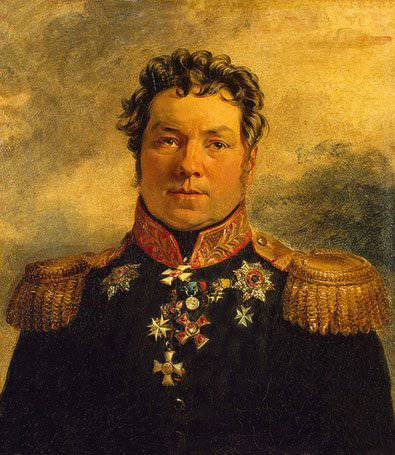 Ctrl Enter
Noticed oshЫbku Highlight text and press. Ctrl + Enter
We are
Napoleon's Six Day War: The Battle of VoshanStart of the 1814 campaign of the year. Part of 2. Battle of Brienne
Military Reviewin Yandex News
Military Reviewin Google News
13 comments
Information
Dear reader, to leave comments on the publication, you must sign in.