Russia delighted the world with the start of Games-2014 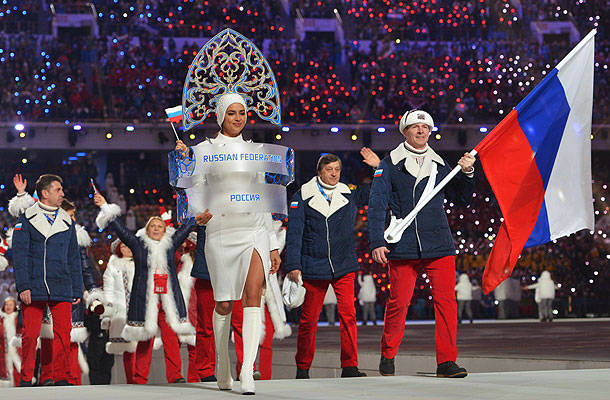 The opening ceremony of the Winter Olympics has delighted everyone who has watched this sports festival. Politicians, fans, journalists, athletes - all are unanimous in that it has become one of the most spectacular and memorable in stories Olympic movement. The world press, in fact, unanimously called the ceremony "a fantastic spectacle."

The ceremony, which was followed live by over three billion people, broke into the Olympic history. This is how the Western media described the show at the Fisht Stadium. “The night of unforgettable beauty”, “an exceptional performance”, “a magnificent event on the Black Sea coast” and “a presentation of a great power” - this evening the world's leading media did not skimp on compliments.

"Russia opened the Games in Sochi with chic and pride," wrote The New York Times. The newspaper noted the ceremony, which was perfectly organized and accompanied by works of classical music and dance of ballet troupes, which told viewers about the history of Russia - from the "royal military might to Soviet monumentalism and the flight into space." “A resurgent Russia has embodied its Olympic aspirations into reality,” the publication emphasizes. “In a big way, Russia has returned.”

“Today’s opening ceremony provided us with a chance to turn our attention to the sport and culture of Russia,” says The Wall Street Journal. "Poetry in Motion" called the opening ceremony of the Olympics in Sochi, the American newspaper The Washington Post. "Each part of the program was written in superlatives," the report said. As emphasized in the material, the scale of the opening of the sports festival "bordered on the colossal," and the "ingenuity of the show directors brought foreigners to a state of awe." The impact of what is happening on the audience was "stately and even subtle," the authors acknowledge.

The opening ceremony of the XXII Olympic Winter Games in Sochi emphasized the beauty of Russian culture. So the influential American newspaper Los Angeles Times described the magnificent show presented by the hostess of the Games - Russia. "The three-hour opening ceremony of the Olympiad at the Fisht Stadium emphasized the beauty of Russian culture and the strength of the spirit of the Russians," the article says. Russian sportsmen, in the opinion of the publication, in a good sense "stole the attention of the audience." A weighty compliment was made to the Russian fans. “The audience was very generous with the standing ovation, and other teams supported,” notes the Los Angeles Times. “They clapped for absolutely everyone.”

“The Russians turned out to be masters with an excellent sense of humor, this was proved by the performance of the Russian choir of the Ministry of Internal Affairs, which presented the hit of the duet Daft Punk - Get Lucky, but here we heard the well-known group Tatu,” the article says. The journalists did not ignore the new form of the Russian team, calling it one of the brightest, most impressive and original at the Games. "The evening was crowned by the torch lighting ceremony, which was entrusted to the legendary hockey player Vyacheslav Tretyak and the figure skater Irina Rodnina," writes Los Angeles Times. - Organization of the show exceeded expectations. "

The Chinese media highly appreciated the organization of the XXII Olympic Winter Games in Sochi and speak with admiration of the colorful and original opening ceremony, which was broadcast live on local television channels. As many of them write, the main theme of the presentation - “The Russian Dream” is revealed by the producers and participants inimitably, originally and elegantly.

Leading South Korean TV channels showed reports about the opening ceremony of the Winter Olympics in Sochi. Commentators note its colorful, Russian flavor, ITAR-TASS. It is noted that at the opening ceremony, called "Dreams of Russia", classical music and art prevailed.

The opening ceremony of the Olympics in Sochi "was beautiful, mysterious, unique as Russia itself." This was noted by Canadian TV companies, which showed a three-hour colorful show live, and newspapers, which placed photos from the Fisht stadium on their pages and websites. As the CBC television company pointed out, "the ceremony was conceived as the glorification of Russia - a country with a rich and complex history, surely reviving after the difficult past two decades and now capable of organizing such major international sports events as the Olympic Games." “It was an amazing demonstration of the history of Russian sports and culture,” added CBC.

“The games in Sochi began with a spectacular festival for athletes and spectators,” the CTV television channel, in turn, noted. According to the newspaper The Ottawa Citizen, "at the ceremony Russia showed itself." “It was emotional, but not sentimental,” continues the publication. “The great power of Russia was shown, its achievements in space, dance, music. The red color of the revolution, the Soviet hammer and sickle, church bells, kings and Bolsheviks, boxers and dancers. everything is Russia. "

“Amazing imagination”, “fascinating”, “unforgettable” - such epithets were given by the British media to award the opening ceremony of the XXII Olympic Winter Games in Sochi. "The opening ceremony of the Olympics was memorable and vivid," said Sam Sheringham, a leading observer at the BBC Broadcasting Corporation. "Those who saw it were present at an unforgettable show."

Sky News Channel highlighted the theatrical component of the ceremony, which was dedicated to different periods of Russian history. “It was a real performance, colorful and bright,” the journalists stressed.

“Irina Rodnina and Vladislav Tretyak lit the Olympic flame of the XXII Winter Games at an exciting ceremony,” the Bulgarian Telegraph Agency (BTA) said. In their report, BTA journalists emphasize the scale and uniqueness of the show, which presented the history and geography of Russia in an original way. Note the originality of the organization of the traditional parade of athletes.

The Finnish media that followed the opening of the Olympic Games in Sochi did not stint on enthusiastic epithets. Journalists called the ceremony "stunning." “The dream about Russia was the main theme of the presentation during the stunning opening of the XXII Olympic Winter Games,” journalists say.

The Belgians celebrated the opening ceremony of the Olympic Games in Sochi as a magnificent ceremony in the Empire style. “The spectacular show marked the beginning of a sports festival,” said the newspaper La Lib Belgielique. “The 2014 Olympics of the Year in Sochi started. Games after a luxurious performance,” writes the newspaper Le Soir.

In Italy, the live broadcast of the opening of the Olympic Games was conducted simultaneously on several television channels, as well as on the website of the newspaper La Repubblica. In general, commentators noted "great taste, refinement, elegance of the show." The combination of historical excursus with a reflection of the realities of modern Russia was highly appreciated. Commentators also appreciated the musical accompaniment of the ceremony and the visual series based on the works of Russian avant-garde artists.

Austrian journalists who characterize the opening ceremony of the Winter Olympics in Sochi as a “splendid journey through the history of the country” and count the approximate costs of organizing it, do not spare words of praise to the favorite of the local opera public - the soloists of the Vienna Opera Anna Netrebko. “Her performance of the Olympic anthem warmed during the cold weather the hearts of many viewers,” notes the Kurier newspaper, recalling that the native of Kuban also has Austrian citizenship.

“An exceptional performance”, “a magnificent event on the Black Sea coast”, “a presentation of a great power” - this is how the Slovenian media estimated the opening ceremony of the XXII Olympic Winter Games in Sochi. They particularly noted the theatrical component of the ceremony devoted to different periods of the history of Russia, in which "thousands of speakers" took part. Referring to the Russian achievements demonstrated during the event, the newspaper "Evening" called the opening ceremony of the Games in Sochi "pure victory."

Commentators of the Japanese public television NHK enthusiastically and with enchantment described the colorful performance of the opening ceremony. A pair of presenters with genuine interest watched the theatrical opening of the Olympics, not hiding the enthusiasm and surprise in his voice. So, at the moment when the girl Lyuba rose into the air, the girl-commentator of Japanese public television joyfully exclaimed: “It flies, flies, Luba flies!”.

The first victories at the Olympics in Sochi were won by viewers and Russia. This assessment of the opening ceremony of the Olympic Games was made by the Australian newspaper Herald Sun. “Many scenes of the festive action that took place at the Fisht stadium were grand and beautiful, just like Russia itself is,” the newspaper writes. “At the same time, large-scale scenes alternated with moments of absolute beauty, from which tears drew into the eyes of the audience.”