February 10 2014
5
In the second half of the sixties, Germany and Great Britain agreed to create a joint project of a promising towed howitzer. The FH70 gun was supposed to have a caliber of 155 mm and the firing range of an active missile at the level of 30 kilometers. In 1970, Italy, which also wished to receive a modern towed artillery gun, joined the development of a promising howitzer. By the mid-seventies, all work on the project was completed, and since 1976, the FH70 howitzer began to enter the troops of three countries. The new gun made it possible to significantly increase the capabilities of the field artillery, but had a number of drawbacks inherent in all towed artillery systems. Therefore, already in 1973, Germany, Great Britain and Italy began the creation of a new self-propelled artillery unit. 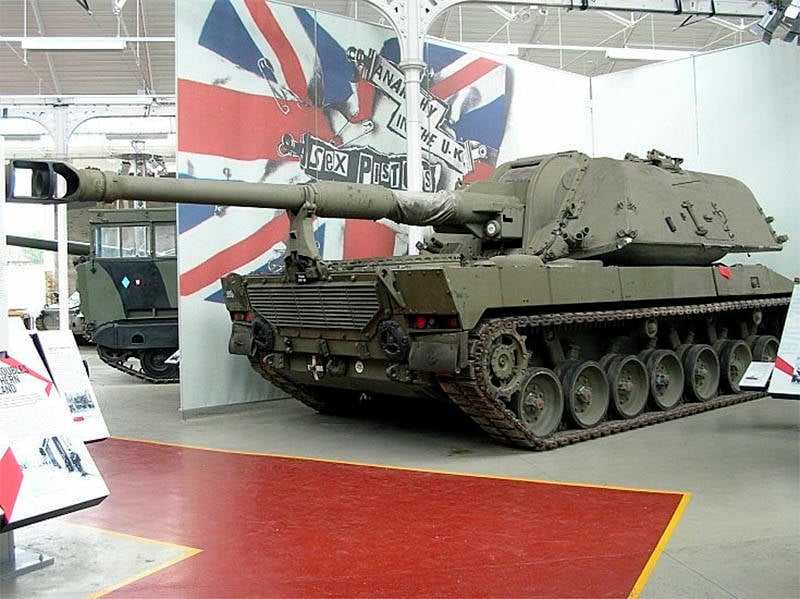 Especially for the creation of a new ACS, which received the designation SP70, a joint design office was organized on the basis of one of the West German enterprises, in which specialists from three countries were to work. The new organization was called upon to provide overall coordination for the actions of the three countries. Other project responsibilities were distributed among various organizations in Germany, the United Kingdom and Italy. So, experts from Germany were to create a tracked chassis and power plant with the exception of the fuel system, automatic loader, gun barrel, as well as electric and hydraulic systems for ACS. In the future, it was supposed to entrust the assembly of serial combat vehicles to Germany. The auxiliary power unit, the fuel system of the main engine, the recoil devices and the mechanisms for installing the guns were developed in Italy. British engineers were instructed to create a turret, an ammunition and a magazine for shells, sighting devices and a number of other tower mechanisms.

According to customer requirements, the promising self-propelled howitzer SP70 was to have dimensions that allowed it to be transported by rail and the combat weight was not more than 50 tons. The requirements for the gun were about the same as in the case of the project FH70. In order to reduce development costs and reduce the price of finished self-propelled guns, the military departments of the three countries demanded to unify the new combat vehicle with existing equipment. For this reason, it was decided to use the developments on the towed howitzer projects FH70, tank Leopard 1 and Marder infantry fighting vehicles.

As the basis for the perspective self-propelled chassis, the corresponding unit of the Leopard-1 tank was chosen. The SAU armored hull had almost the same size and shape as the tank hull, but was notable for the materials used. To facilitate the combat vehicle and provide the required level of protection, the body of the SP70 self-propelled gun was decided not to be made of steel, but of aluminum alloys. Sheets up to 50 mm thick provided self-propelled guns an acceptable level of protection. The frontal projection of the combat vehicle could withstand a hit of 14,5 mm caliber bullets, sides and feed - from 7,62-mm bullets. The layout of the hull was also borrowed from the tank without major changes. In its front part was placed the office of management with the workplace of the driver. In the middle part of the corps there was a combat compartment with a tower, and in the aft - a power pack compartment. Armored self-propelled tower was proposed to weld from the same materials as the body.

As the main power plant, the new self-propelled gun was to receive a Daimler-Benz MB8 781-hp 1000 diesel engine. The engine was executed as a single unit with hydromechanical transmission, cooling system, etc. In addition, the promising ACS received an auxiliary power unit with an HP 35 power. It was supposed to be used for power supply of various electrical systems with the main engine turned off. 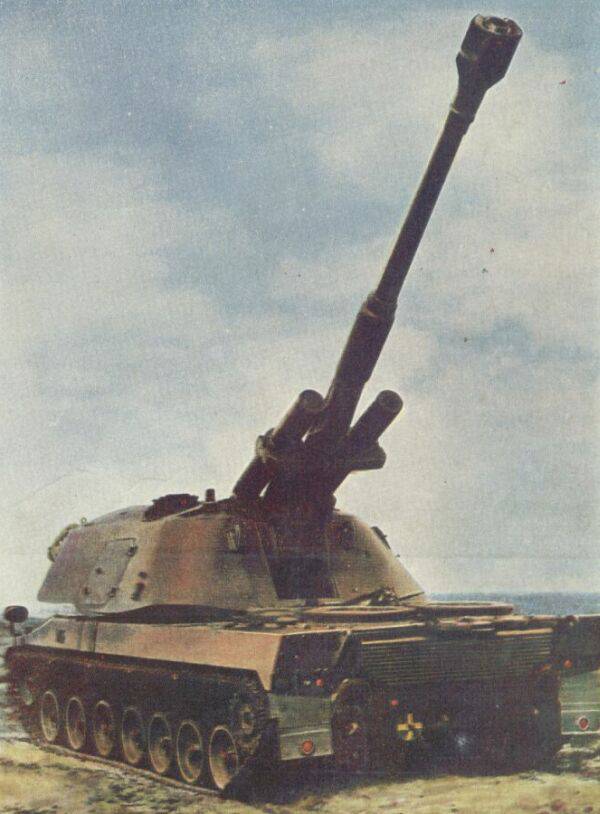 Chassis self-propelled gun SP70 was made on the basis of the corresponding units of the tank Leopard 1. It consisted of seven track rollers on each side. All road wheels had a torsion bar suspension, and the first, second, third, sixth and seventh rollers on each side were additionally equipped with hydraulic shock absorbers. In the front part of the board there was a guide wheel with a track tensioning system, in the aft - a drive wheel. The upper branch of the caterpillar lay on three supporting rollers.

The SP70 self-propelled gun in the stowed position should not exceed 10,2 meters, width - 3,5 m, height on the roof of the tower - 2,8 m. Combat weight reached 43,5 tons. With such a weight, the 1000-strong engine allowed it to accelerate on the highway up to the speed of 68 km / h. The supply of fuel was enough to overcome 420 kilometers. Through the use of waste, tested and mastered in the production of power plant units and chassis, it was possible to avoid the mass of "childhood diseases".

In the four-seater (commander, gunner and two loader) self-propelled SP70 turret it was proposed to install an 155-mm gun, which was a modified version of the FH70 gun. In the design of the towed howitzer made some changes to ensure the installation of guns in the ACS tower and enhancing its characteristics. In particular, the howitzer variant for self-propelled guns was equipped with an ejector. The howitzer had a rifled barrel with a length of just under 39 caliber, a two-chamber muzzle brake and a semi-automatic shutter with a wedge moving in a vertical plane. Two recoil hydraulic brakes and one hydropneumatic hauler were included in the recoil devices. The design of the recoil devices was designed in such a way that when shooting with any possible angle of elevation, the recoil was the same and was equal to 700 mm.

To the right of the breech of the gun, the authors of the SP70 project have placed the jobs of the self-propelled gun commander, gunner, and one of the loaders. The second was to the left of the gun. To increase the rate of fire, the new ACS was equipped with an original automatic loader. Immediately next to the tool was supposed to install a receiving tray with a mechanism for disiligating. At the stern of the turret, the self-propelled guns provided a three-row 32 projectile magazine, nine missile charge containers, and a shell feeder. On the outer side of the stern of the tower was supposed to be a lifting mechanism designed to supply ammunition inside the crew compartment, including when reloading the store. The work of the automated store and the whole process of loading the howitzers had to be controlled by the first loader. Before shooting, he had to manually install the projectile fuses, after which he could give the command to load the gun. On command from the control panel, which was at the disposal of the loader, the mechanisms should have put the projectile of the required type on the feeder. The feeder, in turn, moved the ammunition to the receiving tray, to the discharging mechanism. Then the process had to be repeated with propellant charges.

German and British specialists, who developed the magazine and automatic loader, managed to create an original mechanism capable of charging the gun at any angle of elevation of the trunk. At the same time, however, the maximum rate of fire self-propelled guns, according to calculations, could not exceed 6 rounds per minute. When the automation was damaged, the SAU crew could load the gun manually, but in this case the maximum rate of fire was significantly reduced. Provision was made for the supply of ammunition from the ground. In this case, both loaders were supposed to be out of the fighting compartment and deliver ammunition. The maximum rate of fire when loading manually does not exceed 4 shots per minute.

The 155-mm SP70 self-propelled artillery gun could use any projectiles of the appropriate caliber made to NATO standards. In this case, the basis of ammunition perspective self-propelled guns were to be several types of shells:
- L15A1. The main high-explosive fragmentation projectile British development. With a length of 788 mm, such a projectile carried over 11 kg of explosive, which ensured a greater effectiveness of hitting targets in comparison with other types of ammunition of the time;
- DM105. Smoke shell, developed in Germany. The ammunition was equipped with four capsules with a smoke-generating chemical. Capsules are emitted at a height of about 200 meters and, after a fall, form a large cloud of smoke that lasts for several minutes;
- DM106. West German lighting projectile. The projectile's lighting unit must descend by parachute from a height of 600-800 meters. The characteristics of the applied lighting composition allow for one minute to illuminate the terrain within a radius of 350-400 meters.

When using high-explosive fragmentation shells, the maximum firing range of the SP70 ACS reached 24 kilometers. In the future, it was supposed to introduce an active-rocket projectile into the self-propelled ammunition package, which allows hitting targets at ranges up to 30 km. Considered the possibility of procurement of foreign products. 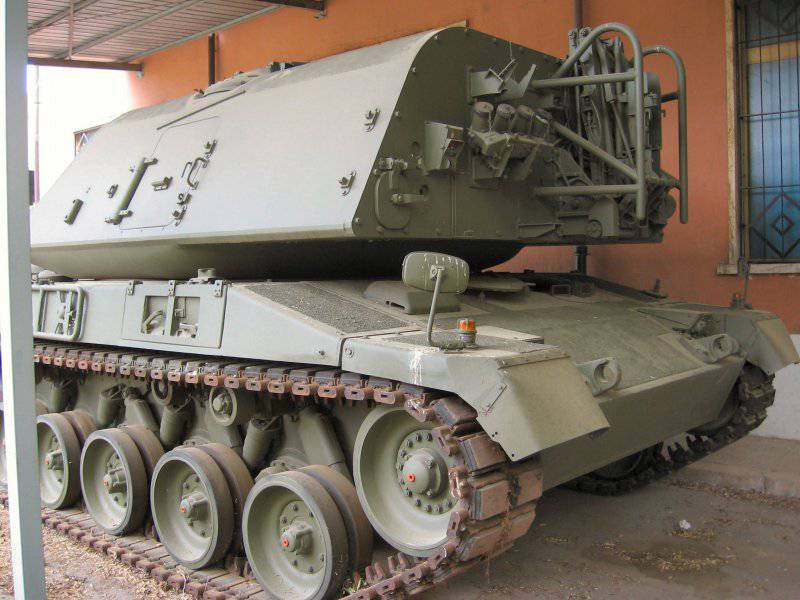 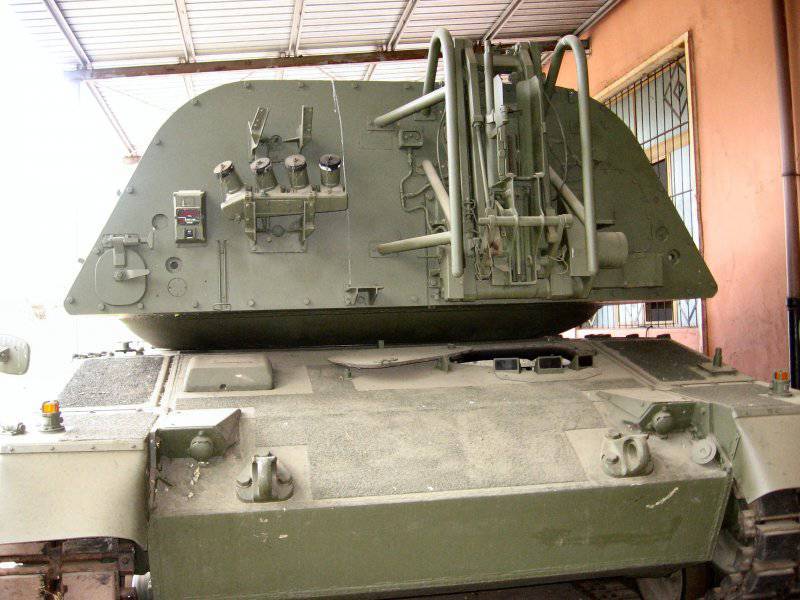 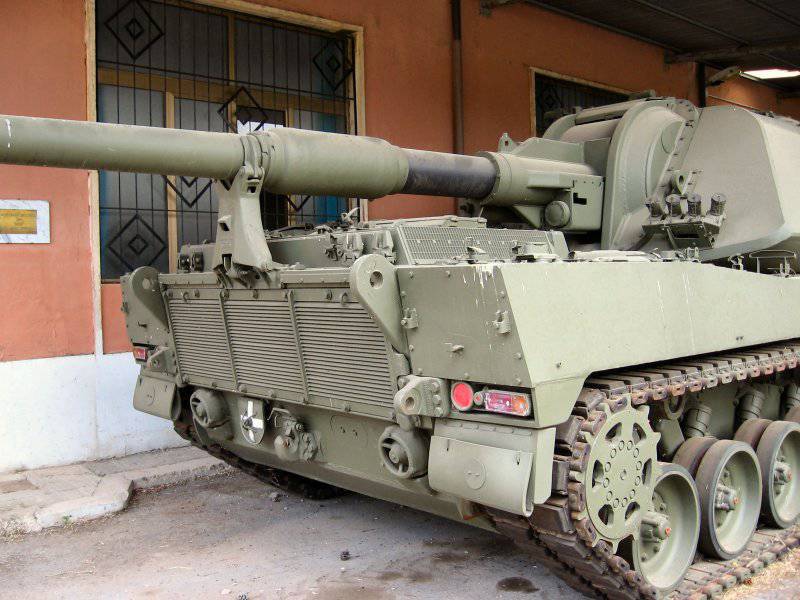 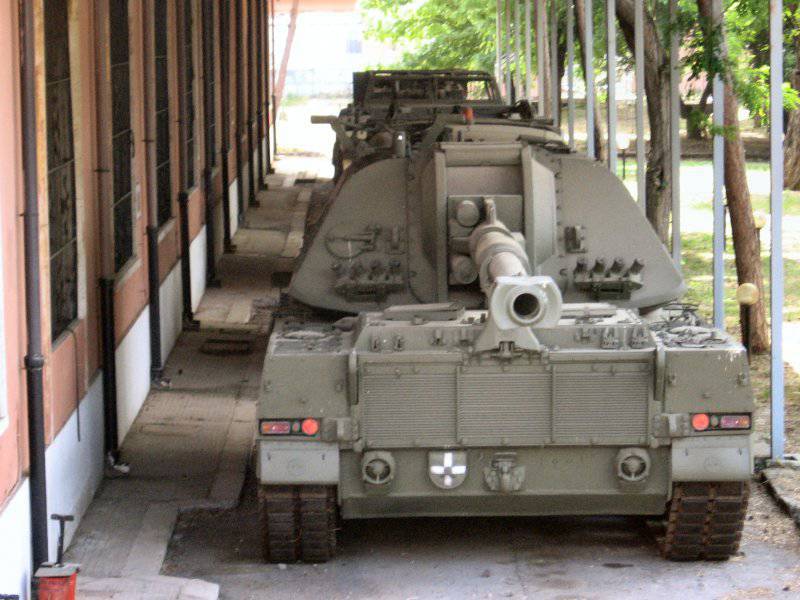 As an additional weapons The SP70 SAU was to receive a 7,62 mm machine gun mounted above the commander's hatch. On the front sheet of the tower it was proposed to install two four-barreled smoke grenade launchers.

According to the calculations of the late seventies, the characteristics of the SP70 self-propelled artillery mount allowed it to attack remote targets of the enemy without risking a counter strike. In addition, there was a high efficiency when shooting at short distances, including direct fire. The chassis on the basis of the Leopard 1 tank had to provide high mobility, and aluminum booking - a sufficient level of protection, which, according to some estimates, was twice as high as the American SAU M109. Thus, it was not excluded that prospective self-propelled guns would be able to effectively work together with tank units, moving behind them at a short distance.

By the end of the seventies, the countries participating in the SP70 project decided on their needs. It was assumed that the serial construction of new self-propelled guns will start in the 1985 year, and the first vehicles will go to the troops in two years. In total, it was planned to release the order of 650 combat vehicles, of which Germany was going to buy 400. The rest of the equipment was intended to be divided between the UK and Italy.

In 1980, five prototypes of the promising SP70 ACS were launched at the test site. The chassis, in the construction of which the components already used in production were used, caused almost no complaints. His fine-tuning was completed fairly quickly. Many problems were delivered to designers of the three countries by various units installed in the tower. The automatics intended for delivering ammunition to the cannon turned out to be the most difficult component of the entire artillery system. Although the problems encountered at the design stage were successfully solved, during the tests some of them reappeared, moreover, new ones appeared.

Testing and refinement of various automatic systems lasted for several years. In the 1985 year, when according to the initial plans it was supposed to begin mass production of new self-propelled guns, Germany refused to further participate in the project. The West German military and the designers decided that the project as it stands had no prospects. After several years of work, a number of shortcomings of self-propelled guns have not been eliminated, which was the reason for the corresponding reaction of German specialists. Having lost an experienced assistant, the UK and Italy soon froze, and then officially stopped all work on the project.

In total, only five SP70 self-propelled artillery mounts were built. It should be noted, the joint project was not useless. Based on the developments gained during its creation, all three participating countries developed their own artillery systems. Germany has created and adopted the PzH 2000 ACS, the UK has operated the AS90 self-propelled guns since the early nineties, and Italy, while working on the self-propelled gun SP70, developed its own project Palmaria.