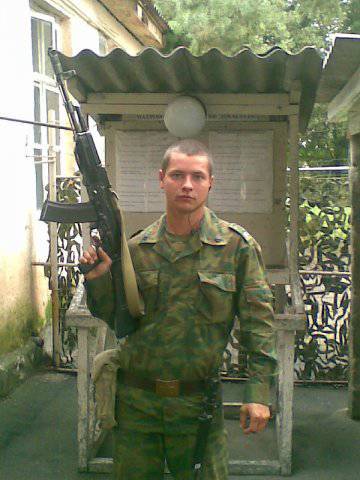 8 was born on February 1986 in the city of Sverdlovsk (now Yekaterinburg) in the Sverdlovsk region. Russian. From a family of workers. In 2003, he graduated from high school number 44 in Yekaterinburg. He studied in one of the colleges of Yekaterinburg in the specialty "programmer".

In October, 2006 was called up by the Chkalovsky District Military Commissariat of Yekaterinburg for military service in the Armed Forces of the Russian Federation. He served in the training tank unit in Elani, then - in the 19-th motorized rifle division of the North Caucasian Military District in Vladikavkaz. At the beginning of 2008, he wrote a report on the conclusion of a contract for military service.

As part of a battalion tactical group under the command of his tank company commander, captain Y. Yakovlev, 8, on August 2008, he entered South Ossetia to stop the genocide of the Ossetian population. When approaching Tskhinval 9 in August, the battalion tactical group, which included tank commander sergeant S.A. Mylnikov, was attacked by superior enemy forces. In the course of repelling the attack, Sergeant S. Mylnikov destroyed the 3 armored vehicle (BTR and BMP).

Directly in a street battle in Tskhinval, having the task of unlocking the surrounded battalion of Russian peacekeepers, Lieutenant Colonel K.A.Timerman, the crew of the T-72 tank commanded by sergeant S.A. Mylnikova destroyed the 2 tank and 3 light armored vehicles. By their actions, the tank crews (total 4 tank) provided a breakthrough to the surrounded peacekeepers and saved them from destruction.

However, the end of the brutal street fight was not visible. Georgian artillery and tanks frenziedly fired on the positions of Russian peacekeepers. Sergeant S.A. Mylnikov's tank acted as a wandering fire weapon. Moving back and forth, he hit the manpower and equipment of the enemy with accurate fire. The car received four direct hits (two of the BMP cannon and two of the RPGs). In the end, the crew left the damaged tank, which already ended ammunition. The ring around the town of peacekeepers shrank. Georgians shot our positions from a distance of 40 meters. The reinforcements, which came to the aid of the peacekeepers, were stopped by the enemy literally several hundred meters. Under these conditions, the battalion commander K.A. Timerman made a decision to retreat towards our troops. However, under the fierce fire to make it was impossible. Opponent continuously attacked. Then Sergeant S.A. Mylnikov returned to his damaged tank and, at maximum speed, sent an unarmed tank towards the advancing enemy. A panic arose in the ranks of the Georgians, who found themselves on the way of the tank over 20. Georgians fled, leaving their fighting positions. This allowed the Russian peacekeeping battalion in this particular place to break through in an organized way to their own, carrying out the wounded and dead. 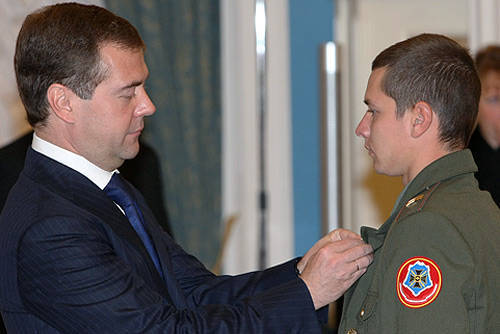 In October, 2008 was retired. Returned to Ekaterinburg.

Ctrl Enter
Noticed oshЫbku Highlight text and press. Ctrl + Enter
We are
Congratulations on the 285 anniversary of the birth of the Great Russian commander Alexander Vasilyevich Suvorov!By the 70 anniversary of the landing and the formation of a bridgehead Small land
Military Reviewin Yandex News
Military Reviewin Google News
237 comments
Information
Dear reader, to leave comments on the publication, you must sign in.