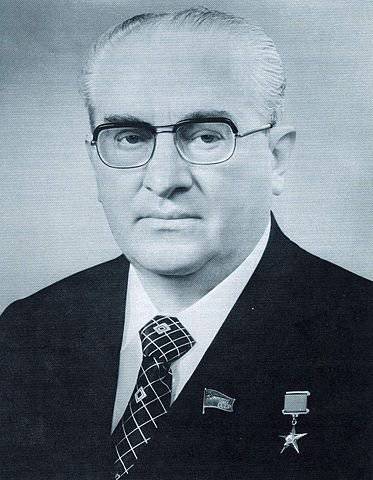 30 years ago, 9 February 1984, the head of the USSR Yury Vladimirovich Andropov died in Moscow. This is one of the most controversial figures in stories Soviet Union. Apparently, Andropov tried to save the USSR, carry out economic modernization and at the same time reconcile with the West, achieve the convergence of the Soviet and Western systems. This contradiction killed him. The masters of the West wanted to dismember the Soviet Union, solve the “Russian question” once and for all, no compromises with them can be reached.


Andropov (maternal - Flekenstein) made a dizzying career. He graduated from a seven-year railway factory school, worked first as a telegraph worker, then as a student and assistant projectionist at the Railwaymen Club at Mozdok station. In 1936, he graduated from the Rybinsk river technical school. In the same year he joined the party line, becoming the secretary of the Komsomol organization of the technical school of water transport, then became the Komsomol of the Rybinsk Shipyard. Since 1938, he headed the regional Komsomol organization in Yaroslavl.

The rise of Andropov came at the time of the gradual decomposition of the Soviet nomenclature. Khrushchev betrayed the Stalin era, interrupted the rise of the USSR. Under Brezhnev, the state was “stabilized”, the excesses of the Khrushchev “perestroika” were eliminated, but they did not return to the Stalinist course. The party "elite" was not engaged in thinking about the development of the "Red Empire", about a breakthrough into the world of the future (although the USSR in 1960-1980-s had a huge technological reserve in order to make a new scientific and technical revolution) West for the best conditions of existence and arrangement of a comfortable life. At the end of the 1960s, massive exports of “black gold” from the USSR began, which spurred the energy crisis during the 1973 Arab-Israeli war of the year. Currency poured into the USSR in a wide stream. The country begins to sit down on the "oil needle". The Kremlin is betting on the construction of an “energy superpower”; all plans to continue Kosygin’s reforms have been forgotten. What for? And so everything is fine. The scheme is simple, it works and now, we sell energy, we get currency, we buy everything we need for it. True, we must bear in mind that the modern Russian Federation, in comparison with the USSR, is in a worse situation. The union had a self-sufficient production in almost all industries. However, the process of “eating away the country” was launched.

The decaying Soviet "elite" was given the opportunity to quietly grow rich, to degenerate into the bourgeoisie, bargaining with the West for the future of the country. A gradual process of privatization of the wealth of Russia by the nomenclature began. And she begins to think about how to preserve and legalize wealth.

The people gradually faded away. The most passionate, patriotic generation was killed or “burned out” during the Great Patriotic War. People saw the degradation of the nomenclature, ideas and ideals dimmed. The communist idea was simply “blathering”. When there are no ideals, they are gradually superseded by "life." The disintegration of Russian culture is proceeding at a rapid pace, it will be supplanted by a “cosmopolitan” substitute for culture. People begin to dream of living “like there”, envying personal cars, jeans, swimsuits, beer and strip bars, “freedom”. The image of a fantastic, never-existing western “kingdom of complete freedom of the individual and society”, “the beautiful life” is being introduced into the minds. Philistinism supersedes idealism. The consumer society drowns the germs of the society of creation and ministry, which was built in 1930-1950-s. The system could not, or rather did not want, to offer people new ideals, using the annoying Marxist-Leninist stamps to everyone.

The “elite” of the late USSR was the worst remnant of the Stalinist system. The best died in the war, could not withstand the monstrous tension, went to the grave ahead of time. Those who sat out in the rear, especially not sticking out, was a performer, survived and "inherited" the empire. Although the education system and science were still well funded, they gave excellent cadres. Russian scientists have created an inflorescence of technology, development, which could make the USSR the undisputed leader of the planet. However, for the most part, these breakthrough developments were created in single copies, went to the archive, were not implemented. "Elite" did not care about the development of the country. Scientific and technological progress begins to tie in the bureaucratic "swamp".

Actually, by the beginning of the reign of Andropov, the USSR had already been prepared for “perestroika”. There is even an opinion that Andropov himself took an active part in this matter. He developed his plan to "modernize the USSR". In the USSR they planned to create an efficient economy. The Communist Party should be removed from power, its functions should have been received by a new structure created on the basis of the KGB and controlled by its people from the party “elite” and businessmen of the “shadow economy” (all were “under the hood”). As head of the KGB, Andropov conducted his "purge" of the apparatus, leaving only the faithful people in the Committee. At the same time, Andropov was able to subjugate the structures of the Ministry of Internal Affairs and the Ministry of Foreign Affairs, which could interfere with his plans. A “Corporation” for the privatization of the USSR was formed. It is clear that honest people remained at the lower and middle level in the KGB, the Ministry of Internal Affairs and the Ministry of Foreign Affairs, but each of them was only a “cog” of the system and could not see the whole picture and resist the conspiracy. The most dangerous were eliminated, others were fired.

However, Andropov’s plans to preserve the renewed USSR did not meet with understanding in the West. Andropov was ready to liquidate socialism, to convergence with the West, but he did not want to ruin the Union into a pile of “independent” warring fragments with each other.

Andropov slowed down the informational impact on the population, which was being prepared for the collapse of the USSR. He was attentive to the needs of the military industrial complex, the strengthening of the armed forces. The Secretary General supported a number of breakthrough projects. If the USSR had time, these projects could lead to a scientific and technical breakthrough that completely changes the reality.

The key part of Andropov’s program was economic modernization. He planned to isolate everything that works well in the Union, into a special “new economy”. The nuclear industry, the military industrial complex, biotechnology centers, etc., were to enter it. With the help of the KGB, they planned to create high-tech, knowledge-intensive corporations that could compete on equal terms with Western firms. With the help of gold reserves, which were gradually withdrawn from the USSR, it was planned to create controlled enterprises abroad.

At the same time, Andropov was in captivity of the “Western matrix”, he believed that the USSR was doomed to death with the superiority of the Western world in the information, cultural and technological field. The Secretary General took steps towards the rapprochement of the Soviet and Western systems.

Interestingly, in foreign policy this rapprochement was marked by a new outbreak of the Cold War. The Kremlin reacted very harshly to the deployment of American cruise missiles in Western Europe. Hardly Andropov acted in connection with the incident with the South Korean Boeing in 1983 year. Confrontation intensified in Afghanistan.

Apparently, it was a psychological operation, a demonstration of power. The Kremlin showed the West the power of the USSR, readiness for tough actions. As a result, the most advantageous positions were created for conducting negotiations (after the death of Andropov, Gorbachev surrendered all of them). Intimidating the West, Andropov then intended to carry out a "modernization of the USSR", integrating Russia into the world community on the most favorable conditions for Moscow.

However, the death of Andropov in February 1984, interrupted a bold experiment on the convergence of the Soviet and Western systems. Some researchers even express doubts about the naturalness of the death of the Secretary General. It is believed that it was eliminated. The masters of the West built a completely different world. Their New World Order is a caste, neo-slave society, where the spiritual, intellectual and physical development of the overwhelming majority of people is stopped, and high technologies are accessible only to the “elect.” In the USSR, intellectuals dreamed of convergence that would unite the economic possibilities of capitalism and the advantages of socialism in the development and implementation of the intellectual and creative abilities of people.

It should be noted that the mechanisms launched by Andropov continued to work after his death. Those people who have already been prepared to perform their assigned roles continued to carry out their programs. So, Gorbachev, Shevardnadze and Aliyev put forward Andropov. These Westernizers were to implement the second part of Andropov’s plan — to democratize society, to conduct “perestroika” and to make peace with the West. However, by this time the USSR had to carry out economic modernization, intimidate the West with an arms race, so that it could dictate its conditions. Andropov did not have time to complete the first part of his program.

Gorbachev tried to do everything at once - to modernize the economy, to accelerate economic growth, to democratize society, to actively cooperate with the West. The control over the situation that Andropov had was completely lost. At the same time, the “elite” did not stop him, as they did with Khrushchev. She just passed the country. Before this, the last stronghold of the USSR — the army — was “cleared out”. For this, they used provocation with Rust's flight. The network created by Andropov also took part in the collapse of the USSR. Apparently, having decided that there is no chance to save the country. "Andropovtsy" focused all their efforts on preserving the system, pumping the most important resources into it.

In general, Andropov played a negative role in the fate of the USSR. Wanting to “modernize the USSR” to the best of his understanding of the situation, he made such a selection in the KGB and the party leadership, that the “Westerners” who were immediately “under the hood” of the West were at the helm after his death. They had no strategic thinking, many were corrupt, they lived only by personal and narrow group interests. As a result, the Soviet Union was doomed.