And what if Ukraine still has early elections?

February 10 2014
99
After the information published by the Ukrainian media that President Yanukovych, in principle, is not against holding early parliamentary and presidential elections, a series of questions arise as to how such elections today can contribute to the consolidation of the country. And these questions can hardly be called idle, since today the political situation in Ukraine is such that the country remains virtually divided into three ideologically rival camps. One of them is in favor of integration with Europe, the second, let's say, votes for rapprochement with the Customs Union, and there is a third camp, using frankly Nazi rhetoric, broadcasting on the "exclusivity" of Ukraine and Ukrainians. In this regard, it is worth thinking about what Ukraine can expect if Yanukovych really decides on early elections. To determine the specific subject of conversation, you can refer to the situation in the Autonomous Republic of Crimea. 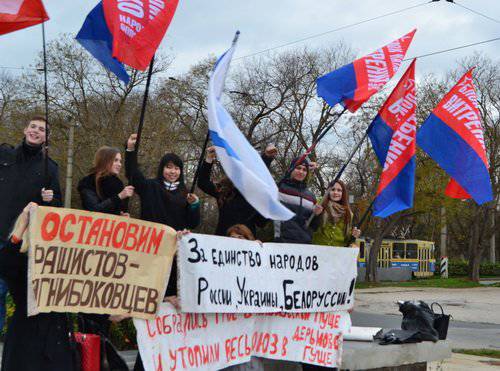 Why is this the Ukrainian region chosen for consideration? The fact is that the Crimean authorities are now turning to Russia with a request to give guarantees of the stability of the Crimean autonomy. Naturally, such an appeal of the ARC to Moscow activists of the Maidan brings to a white-hot, because a substantial segment of the “show program” of the “maydanutye” is actually based on anti-Russian rhetoric. However, the authorities of the Crimea do not care about the white heat of Maidan from the high bell tower. Their appeal to Russia in the ARC is explained as follows:

We are convinced that our initiative will be unequivocally supported by the majority of deputies of the Crimean parliament and by the majority of Crimeans. By its national composition, the Crimean population is 60% Russian, and culturally - by 80%. And in the situation when the opposition political forces in Kiev turn to the Western countries for mediation and support, it is quite logical that we will turn to the Russian Federation for the same. For our part, this is a symmetrical response to the actions of the opposition, on which, by the way, we have much more reasons, given historical Crimea belongs to Russia until the famous decision of Nikita Khrushchev.

These are the words of the deputy of the Supreme Council of the Autonomous Republic of Crimea Sergey Tsekov, who represents the Russian Unity party. Deputy cite "Vesti.ru".

Indeed, if the so-called Ukrainian opposition is actually openly relying in its actions on the West, then why would the majority of Crimeans not rely on Russia.

So, back to the consideration of the situation that could develop, pass the presidential and parliamentary elections in Ukraine now. Against the background of what is happening in a number of western regions of the country - complete paralysis of power after the seizure of administrative buildings by swells under the banner of the UPA, it cannot be ruled out that the number of nationalists in the Verkhovna Rada may well grow after the early elections. If today Freedom in the RNG 36 seats (10,4% in the 2012 election of the year instead of the 0,25% in the 2007 election of the year), then an unhealthy nationalist (and even Nazi) background can significantly increase the presence of the “burden workers” in parliament.

This can happen, if only because the “Party of Regions” has actually deceived its voters who voted in 2012 first of all for the position of the “regionals” concerning integration with Russia and the CU. No effective integration occurred during this time, the president’s throwing reached its apogee by December 2013, moreover, the Maidan again emerged from the depths of the originality of Ukrainian politics, and therefore the credibility of the Party of Regions and Viktor Yanukovych was undermined.

If you believe the data of the Ukrainian statistical agencies, the level of trust of PR has declined significantly, even in those regions that were traditionally among those supporting the party of Viktor Yanukovych. For example, in the Donetsk region, the “Party of Regions” is ready to support about 30% of respondents (the January version of the poll), although during the 2012 voting, the result in the Luhansk region was much more pleasant for the “regionals” - more than 65% of votes. Approximately in 1,5 times the level of confidence of the “Party of Regions” fell in the Crimea, where in 2012, every second vote was for this political force.

This state of affairs suggests that the “Party of Regions” and specifically Yanukovych from the failure in the southeast “will be saved” only by a distinct political position. And while intelligibility here is not visible. This can lead to the fact that the Parliament of Ukraine, at a minimum, “pooranzheet”, as a maximum, “will turn brown.” It is clear that in the same Crimea, “fractions of a percent” (within the statistical error) will vote for the orange-brown ones, but Lviv, Ivano-Frankivsk, Ternopil, Khmelnitsky and other western regions will clearly support the mentioned political forces. In the election of 2012 of the year, “Freedom” in the Lviv region was supported by more than 38% of voters!

It turns out that the slurred position of the parliamentary majority today can lead to the fact that tomorrow it will cease to be a majority. And if so, then the context of the laws that are born in the Rada will change dramatically - it is known which way ... It can be assumed that, again, such issues as Ukraine’s entry into NATO and the Black Sea’s withdrawal will be on the agenda. fleet Russia from Sevastopol, the revision of the autonomous status of Crimea, the persecution of Russian-language schools, theaters, the media and all that sort of thing.

How will the Crimea behave in such a situation? Crimeans just will not tolerate the fact that in their "monastery" orange-brown will try to drag in their understanding of the administration of politics. In this regard, the ARC may finally withdraw from any contacts with the central Ukrainian authorities, which for Kiev at best may lead to the need to consider the issue of federalization and confederalization of the state. Best case scenario! And at worst ...
According to the same scenario, the situation can develop not only in Crimea, but also in other regions of the country, which see their development path in close integration with Russia.

This suggests that early elections in the current situation can hardly lead to the consolidation of Ukrainian society. I wonder if Yanukovych and Putin talked about this during a long personal meeting in Sochi after the opening of the Olympiad? ..

Ctrl Enter
Noticed oshЫbku Highlight text and press. Ctrl + Enter
We are
Situational analysis of the death of the MH17 flight (Malaysian Boeing 777), made on the basis of engineering analysis from 15.08.2014Results of the week. “And the Crimea of ​​the Fatherland is sweet and pleasant for us!”
Military Reviewin Yandex News
Military Reviewin Google News
99 comments
Information
Dear reader, to leave comments on the publication, you must sign in.