Ukraine: split of the opposition 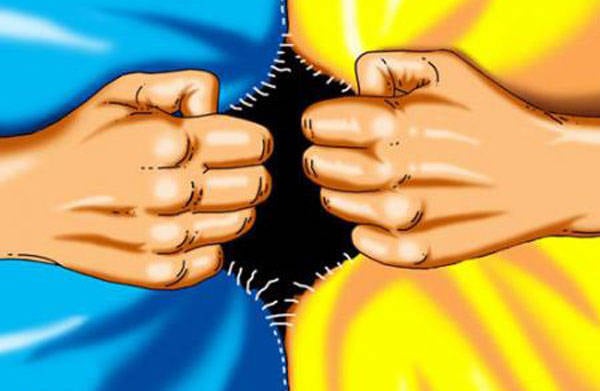 The protest movement in Ukraine increasingly began to resemble Libya after Gadhafi was overthrown there and where the armed opposition forces were fighting brutally between themselves for power. In Ukraine today, the situation is approximately the same: at the end of January, the Svodobovtsy seized the building of the Ministry of Agrarian Policy and Food, which had already been seized by another opposition group, Spilny Law, and where a volunteer recruitment point was set up (so-called “assault troops” ).

The re-take-over of the building was rather tough: there is documentary evidence for this. A video from the building that was taken by storm appeared on the Internet, and shots are clearly heard on this video, not single shots, but in full bursts, as well as loose cartridges on the floor and blood stains. Moreover, according to media reports, several people were taken away by ambulances. In addition, at about the same time, another group of “Svobodovtsy” tried to seize the building of the regional administration in the city of Lviv, where opposition forces have also been stationed for a long time.

Immediately it should be noted that the reasons that prompted the representatives of "Freedom" to unexpectedly attack their own comrades in the opposition and Euromaidan are very obvious and extremely banal. Since the end of last year, the events that took place in Ukraine have been very successful for the party of Oleg Tyagnibok. Initially, the protests were massive and nationwide, in addition, a representative of the party, Eduard Leonov, became the commandant of the captured building of the city mayor's office. He was later replaced by another "svobodovets" - Ruslan Andriyko, by the way, without the consent of the participants of the Maidan. And the photos taken in the building indicate that, apart from the symbols of “Freedom,” there are no symbols of other opposition forces. This building housed hundreds of Svyatoslav the Brave.

A similar situation exists in other areas of Euromaidan activity: where in the open, where gradually "Freedom" began to sort out the main functions. So, in particular, the funds for material support of the Maidan were in the hands of the deputy of the Verkhovna Rada, the representative of the same “Freedom” Mikhail Blavatsky.

Such an active position together with the participation in the protest rallies of hundreds of thousands of “Freedom” activists made it possible for the very first elections to declare their important role on the Maidan and thus increase the representation of their party in the Verkhovna Rada. By the way, the similar “focus” of “Freedom” has already been done earlier: in October 2012, at the parliamentary elections, she won almost 11 percent of votes against almost one percent in 2007. And all because “Freedom” in the public consciousness has established itself as the main radical, even despite the fact that in reality the party did not quite respond to such a description.

“Svobodovtsy” did not take part either in the seizure of buildings, in battles on Grushevskogo street, or in clashes in “Berkutovtsy”, it was very important for them to maintain the status quo. That is why, when seizures of buildings of state institutions began in many regions of Ukraine, representatives of the party began to declare that all of these were provocations of pro-government forces and that they were set up for a peaceful solution to the conflict. However, a little later, the party leadership realized that it was already enough to play moderation, because the forces on the Maidan became more radical, and the appeals of the period of the beginning of the revolution are no longer relevant. Moreover, much more approval from the public, even among the most apolitical representatives of it, is caused by more radical groups - Spilna on the right and Right Sector, which attack the special forces and seize administrative buildings. Moreover, in some mass media there appeared information that if elections were held in the country in the near future, the Right Sector would easily have managed to overcome the 5% threshold, taking some of the votes from the same Freedom.

It should be noted that the practice of transition from moderate radicalism to its more powerful manifestation in the world stories far from new. A vivid example of this is the representatives of the Greek National-Conservative Popular Orthodox Party, which during the last elections increased their results and went to parliament with triumph. And only after the crisis of 2011, they suddenly became too soft, so they lost some of the votes that neo-Nazis from the Golden Dawn had. Obviously, Freedom does not want to lose votes in this way, which explains the activization of its activists, who had previously not taken any part in street clashes.

If we talk about what this party is trying to achieve, then there are several explanations. The first is the one that enjoys great popularity among the radically-minded part of Euromaidan - the actions of the “Svobodovtsy” are determined by certain agreements with the authorities. As evidence of their correctness, the radicals say that the amnesty law, which was promoted by the representatives of the party, was not very profitable, the building of the Ministry of Agrarian Policy was returned. And indeed, on the last day of last year, information appeared that the work of the Ministry was resumed, and the staff of the department returned to their workplaces. Moreover, on the same day, other information appeared - that the law-enforcement agencies were on the wanted list of Alexander Danilyuk, leader of the “Spilna sprava”.

Agree, the coincidence is so strange that it is quite possible to suspect the leaders of "Freedom" in collusion with the authorities - in exchange for the opportunity to remain in big politics, "Svoboda" could assume the function of suppressing radical forces on Maidan.

Regarding the second explanation, it is the desire of "Freedom" to declare itself as the most effective force of the protest movement: if the radicals kicked the police out of administrative buildings, and they kicked out these radicals, then, accordingly, they are the strongest. In addition, the seizure of buildings at the same time will make it possible to thwart their opponents a set of new fighters, and complicate an already difficult life (after all, in this weather, few people will survive for a long time).

Do not lose sight of the above-mentioned "Right Sector", an organization that first showed itself in early December last year during the so-called "bulldozer provocation" on Bankova. Then its representatives became real “heroes” of Euromaidan immediately after the peaceful protest passed into the phase of active confrontation.

Dealing with what this organization is is quite simple. According to media reports, it appeared relatively recently. In fact, it is not even an organization, but a union of several radical right-wing forces. Thus, neither the leaders nor the list of members does not exist.

Analysts say that the “Right Sector” arose as a result of the weak organization and coordination of the actions of various organizations. At the same time, his actions are coordinated spontaneously, but the creation of groups in social networks and the daily addition of hundreds of fans allowed the radicals to quickly become familiar with the features of coordinated work. Confirmation of this - quite a successful confrontation "Berkut".

It should also be noted that the ideology of the “Right Sector” was inherited from organizations whose members are members of it. Thus, the Right Sector opposes Russia's interference in the internal affairs of Ukraine, the entry of the state into the Customs Union, as well as the change of the political system in Ukraine. On the other hand, representatives of the organization for the most part do not support Ukraine’s accession to the European Union, since it considers it as the oppressor of European states. At the same time, they recognize Ukraine as part of Europe.

Note that the “Right Sector” is far from being an alien organization for the Ukrainian capital. It is based on football ultras, which are mostly Russian-speaking, but at the same time they adhere to the positions of nationalism. Such a symbiosis provides cohesion and vitality of the organization. The first serious action of the group was an attack on the "berkutovtsy" of December 1 on Bankova Street. Then, I must say, they were mistaken for provocateurs and sharply criticized. The first serious success of the sector were clashes with the special forces of January 19, which escalated into protracted battles on Grushevskogo street.

Like any other radical organization, the Right Sector considers the activities of political parties too apathetic. Most of the criticism goes to Freedom, which the radicals consider too clumsy and weak-willed. Yatsenyuk obmaterili, Klitschko - doused from a fire extinguisher, and in Poroshenko simply launched stone. Opposition leaders did not remain in debt, however, only verbally, calling the “Right Sector” provocateurs.

Thus, the emergence of the “Right Sector” is a completely natural consequence of the long-term self-isolation of the authorities from the dialogue with the public. Thanks to irreconcilability towards security officials and compromises, the organization touched upon the emotional strings of the people, which the opposition leaders tried not to touch at all. However, all the recent events, in particular, the constant use of force against protesters, the reluctance to compromise indicates that Ukrainian society will become more radical, which is very beneficial for the Right Sector. Therefore, hopes that the conflict, which lasts more than three months in Ukraine, will be settled peacefully, is becoming less and less. And this should be wary of the same “Freedom” if it wants to maintain its position and be able to somehow influence the power. And from here a fairly simple conclusion - the opposition forces will continue to compete with each other, and this rivalry will not be peaceful ...