February 8 2014
59
The submachine gun PP-2000 was developed by Tula gunsmiths in 2001 and is intended for anti-terror units. The submachine gun PP-2000 was developed personally by the professor V.P. Gryazev, the head of the automatic rifle and cannon armament division of the Tula State Unitary Enterprise "Instrument Design Bureau" (GUP KBP). In addition to him, they participated in the work on PP-2000 weapons KBP specialists B.A. Volkov, B.I. Kuznetsov and others.


• The range of damage PP-2000 to 300 meters. This is the first Russian pistol after the collapse of the USSR, which surpasses all European counterparts of submachine guns. The highest fire density in the melee is the main advantage of the PP-2000. Designers have reduced to the minimum number of all the parts used in its creation. Submachine gun is made in a convenient form, which is suitable for concealed carrying.

• The submachine gun was created from a combination of plastic parts of the body of the machine gun and ordinary metal parts for the production of a shot. Plastic parts will not suffer from corrosion, in cool weather they do not have a cooling effect when touched. To reduce the effect of unmasking when using a submachine gun, it is equipped with a slit flame arrester. Thanks to these innovations, PP-2000 weighs less than a kilo and a half and can be disassembled in less than 30 seconds.

• Domestic developers have already exposed this model at the Interpolitex-2006 exhibition, which was held in Moscow. The submachine gun PP-2000 was finally ready and went into production in 2006 for the Ministry of the Interior of the Russian Federation. Currently, PP-2000 submachine guns are used by separate units of the Ministry of Internal Affairs of the Russian Federation and adopted by the Federal Bailiff Service.

• For aiming, the PP-2000 is equipped with a standard front sight and a flip entirely. The submachine gun has one interesting development - the use of the 9x19 Parabellum cartridge. According to the developers, this is due to the fact that PP-2000 is primarily intended for police forces using weapons for stopping action. This is due to the fact that the use of weapons with a caliber 5,45 mm has a less stopping effect compared to weapons with a caliber 9 mm. A bullet of the caliber 9 mm gives the body of the criminal a large kinetic energy and affects a large area of ​​the body, which acts as a stopping factor.

• The submachine gun has the ability to retrofit a collimator scope or a night sight scope. The fuse is executed on the left side of the submachine gun, the translator of the firing mode is also located there, cocking the PP-2000 takes place using the handle located above the stem box. Turn it left or right and the weapon is cocked.

• The barrel has a chrome plating. According to the type of automatics, the PP-2000 submachine gun refers to a weapon with a free gate. Trigger trigger type, providing fire bursts and single fire. Before the start of firing, the cartridge is located in the chamber, and the shutter is in its front position, which closes the bore. Such shooting is called “from the front whisper”. 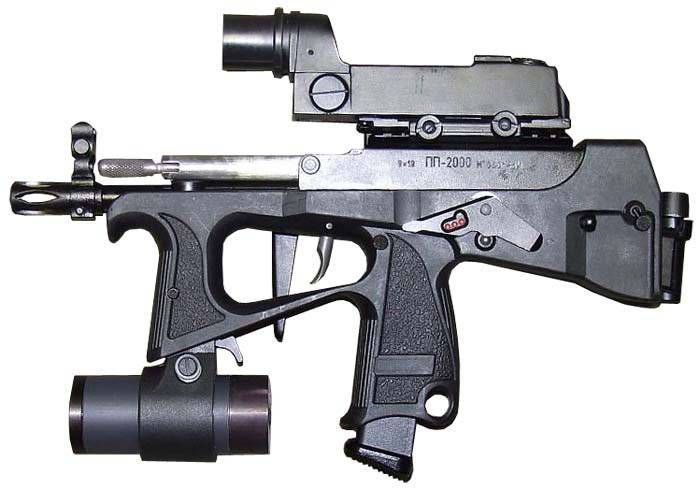 • The rate of fire of the domestic submachine gun to 10 shots per second. Compared with other domestic and foreign small-sized submachine guns PP-2000 has the lowest rate of fire. This has been achieved without the use of a special retarding device, mainly due to the rational design of the dynamic parameters of the trigger and the characteristics of its combat spring.

• We note another feature of the ammunition - when firing a shot, the bullet, taking off from the barrel and hitting an obstacle, does not ricochet, which gives unique opportunities to use a submachine gun in confined spaces and limited spaces to free hostages or neutralize dangerous criminals.

• Another refinement Tula designers - spare holder, having 44 ammunition. PP-2000 has a butt of folding action, and here the developers again used the Russian ingenuity - the additional clip easily becomes the place of the butt and performs its functions. This is very convenient when conducting combat operations - an additional shop can easily be removed from the butt location, which allows you to continue the fight without looking for an additional clip in the equipment. 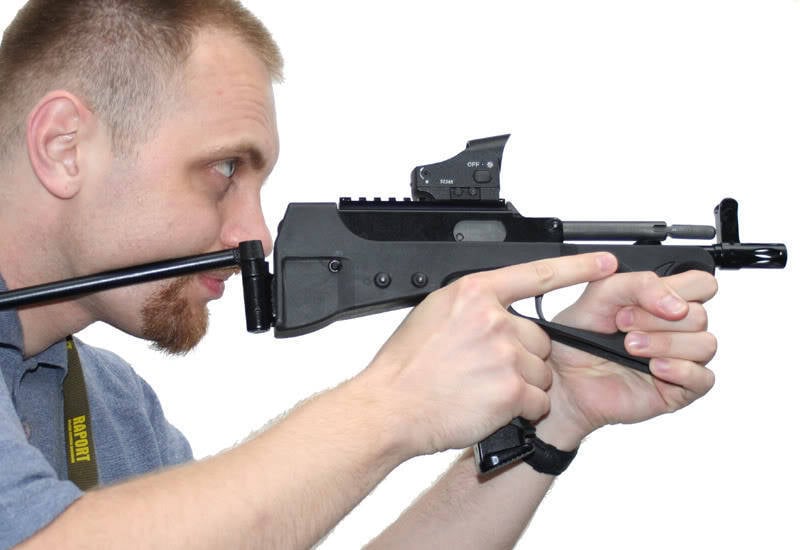 • PP-2000 - the best submachine gun in its class and significantly ahead of all the other submachine guns, for example, the wide-spread MP-5 submachine gun of “Heckler & Koch” in terms of its main characteristics and combat effectiveness. Moreover, this effectiveness should be provided by the arrows of the average level of fire training.

• For conducting low-noise and flameless firing on the PP-2000 provided for the use of the muzzle. The silencer developed in the KBP is not collapsible, which significantly simplifies its design and eases production. A submachine gun can be equipped with a target designator with a laser version of the Zenit-4EK, a silencer and a tactical flashlight.