On the revolutionary itch in the "post-Soviet twilight" 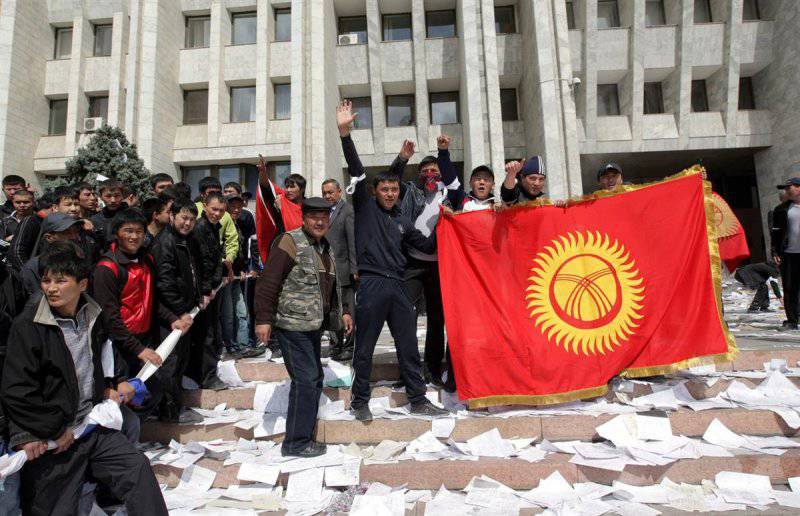 “Revolutionary winds”, which blow away the fertile soil layer on which economic success should grow, will not soon cease to disturb the Eurasian space. Writers, directors, the main cast and extras perform the same order. But the result is not the premiers with big box office, but the tragedies of millions of people. For the last four years, Ukraine (today) and Kyrgyzstan (in April 2010) have been fighting for the title of the “main film set”. You can safely draw analogies.

Lyrical phraseologism "post-Soviet twilight" came up with a prominent atlantist, well-known adviser to the President of Ukraine Yanukovich Bruce Jackson. For all his sincere hatred of the Eurasian integration processes, he was often honest in details, for example, when he wrote that “the conditions in which the post-Soviet states are located may have improved compared to the abyss in which they appeared at the beginning of the 1990s . However, these states have not risen to the level of the Soviet period ... The color revolutions largely throw them back. ”

How does political culture change with every color upheaval? This is clearly seen "on the ground." In Kyrgyzstan, the last “revolution” happened three years ago, and stability is not yet visible. "Pie" is still not divided, but in the "kitchen" there are fewer portions of delicacy. The struggle is constantly sharpening, and the methods are becoming increasingly marginal. We outline the situation with a few strokes.

A member of the Kyrgyz Central Election Commission Gulnara Dzhurabaeva told at one of the big round tables on the results of the “revolutionary changes”: “We have about 2300 precinct election commissions. They include about 25 thousands of people. And, carefully analyzing the results, we see that many of them use dishonest methods. Fraud, "carousel", illegal methods of campaigning. The question immediately arises: is it possible to build competition on such methods? Probably not. Money acts on someone, administrative resources on someone, relatives - on someone. But in the end everyone will answer. ”

“Power is a pyramid, on top of which is either the president, or the parliament, or the government. Our problem is that today the base of this pyramid has rotted. It is easy to deal with presidents. However, it is very difficult to fight with a huge army, whose bribery is already in the mentality, ”these are the words of Raykhan Tologonov, a former deputy of the Kyrgyz parliament. He made this fiery speech in front of the cameras, and after a short time he passed the mandate, because he was caught participating in looting in April 2010.

“Everyone has forgotten that thin ice is under their feet,” - such a refrain in public speeches of public figures in Kyrgyzstan can be heard very often. The activity of the masses does not subside, people are used to the fact that they can achieve any of their goals with the help of the rally. Excellent soil for destabilization projects is fertilized each time by regular unrest. Their number in Kyrgyzstan is growing exponentially. In Bakiyev times (before 2010), the crowd gathered a couple of times a year. Now - up to ten, and even more. And almost every rally ends in turmoil: before the leaders somehow controlled the crowd, now there is almost no. Each new wave pursues more parochial interests, the level of responsibility falls. Each subsequent group of "revolutionaries" is trying to speak no worse than the previous one. It turns out not at all, the general vector - on chaos.

Maybe this is an exclusive Kyrgyz script? Ukraine will go the other way, other victims of "color provocations" will present their stories? Yes fullness!

Here again, the ideological opponent of Bruce Jackson refutes this possibility: "Norman Davis in the book" The Disappeared Kingdoms "tells an entertaining history about what happened after the looting of Rome by Alaric in 410, AD As it turned out, Alaric founded the Visigothic kingdom (kingdom) in Aquitaine in France, having built it almost entirely on the basis of political culture, the system of organization and the laws of the Roman Empire itself, to the fall of which he so contributed. In short, after the barbarians plundered Rome, they tried to reconstruct this model, but in a degraded version. ”

Nothing new under the moon, in a word. There is no other way (if we are not talking about a true internal revolution with a change in ideology, political culture and elites). The result of all this is total marginalization.

How does the heart calm down

The way out is simpler than it seems at first glance. Reducing social tensions and strengthening security — state, informational, and public — can turn all this camarilla from destruction to creation. Manipulators of all stripes should be an order of magnitude more difficult to achieve their goals. And only industrialization will reduce social tensions (unemployment stimulates vacillation on rallies). Security ... There’s nothing to talk about. Indeed, even ardent opponents of Eurasian integration processes speak of its potential growth within the framework of the Eurasian association.

Ctrl Enter
Noticed oshЫbku Highlight text and press. Ctrl + Enter
We are
About Stalin and KhrushchevList of destroyed the largest and most high-tech enterprises
Military Reviewin Yandex News
Military Reviewin Google News
32 comments
Information
Dear reader, to leave comments on the publication, you must sign in.