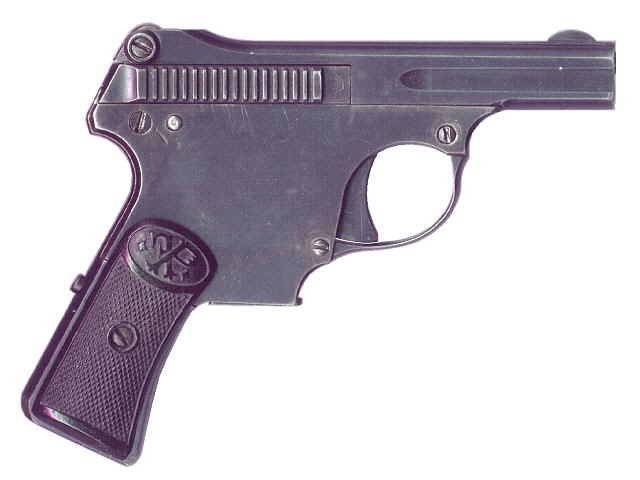 Erika's 4,25 caliber mm pistol was developed by designer gunsmith Franz Pfannl from the Austrian city of Krems (Krems) in the year 1912. A gun was offered to the market. weapons as a European multiply-charged counterpart of the American Derringer (Derringer), and positioned as a compact self-defense weapon, designed for both men and women. For the gun was created a special cartridge caliber 4.25 mm. The cartridge was developed in agreement with an enterprise specializing in the production of ammunition - "Hirtenberg." In addition to the 4,25 mm Erika, one of the patron names was 4,25 "Liliput" (Liliput), since under the same cartridge the German arms firm produced a pistol with the name "Liliput". 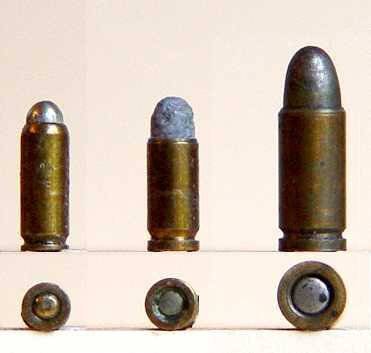 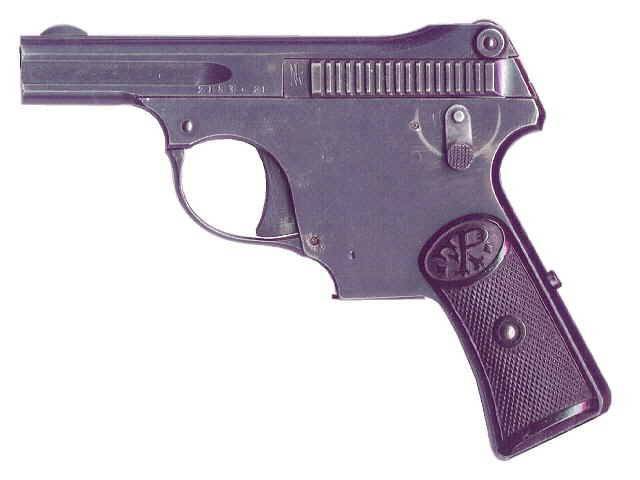 The layout of the gun was rather strange. A box-shaped removable magazine was located between the handle and the trigger guard. The weapon had automatics, working at the expense of return of a free shutter. 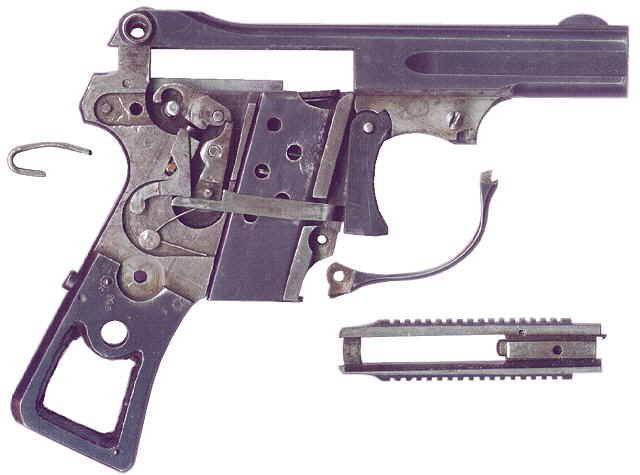 Erika's pistol (Erika) consisted of a frame, a bolt, a barrel unit, parts of a firing mechanism and a body cover, which was fastened with screws on the right side of the frame. The receiver unit was connected with the frame pivotally in the rear part of it and was fixed with a pin in the front part of the frame. The shutter moved between the frame and the upper protruding part of the barrel unit (the cover of the bolt box). 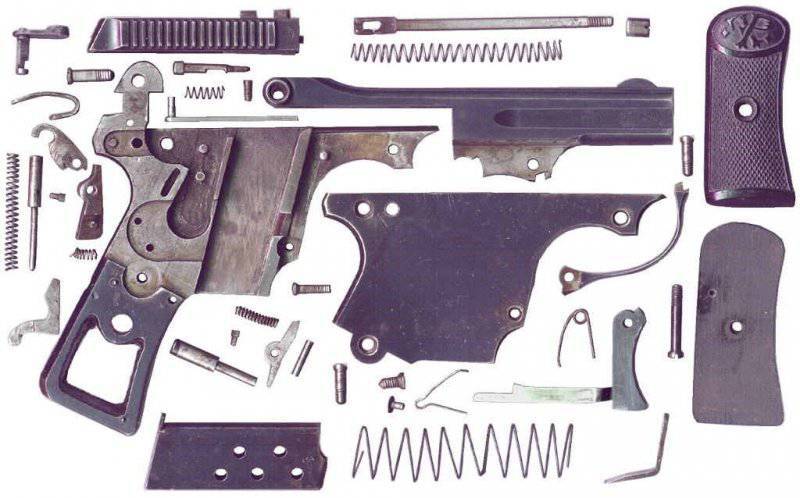 The upper part of the bolt with its protrusion was connected with the guide rod. The guide rod transmitted to the bolt the force of the return spring placed in the tunnel of the barrel unit above the barrel bore. 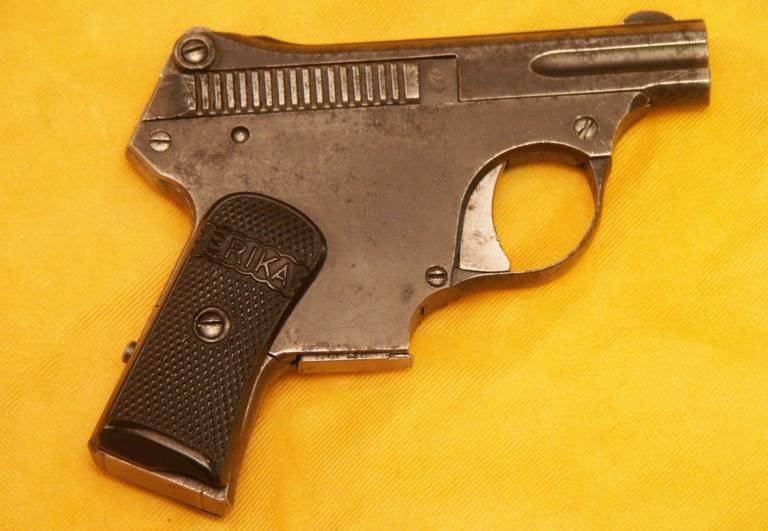 The bolt on the side had a vertical notch for easy reloading weapons. The trigger mechanism of a pistol of the hammer type, but the trigger is hidden, it is possible to fire the weapon only with a self-platoon. 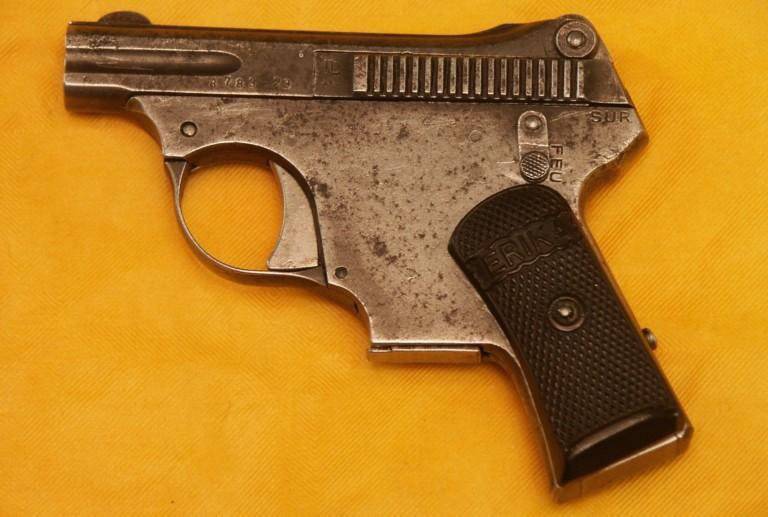 Eric's pistol fuse (Erika) is mechanical; it can be located both on the right and on the left side of the frame. The safety lock switches the trigger when it is turned on. 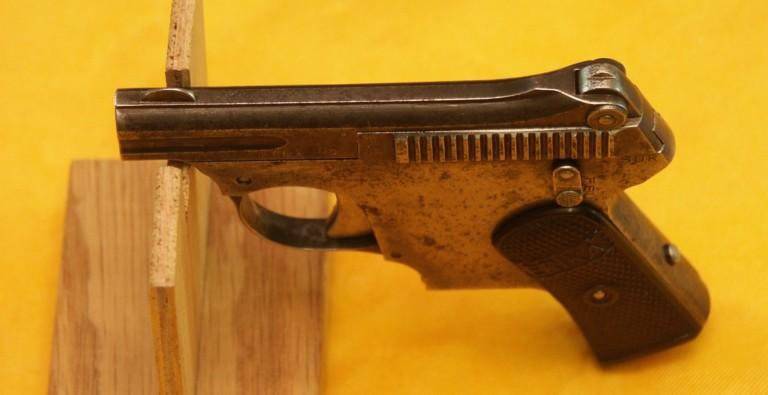 Sights are a fixed front sight and a rear sight in the form of a cut in the protruding part of the frame. Shop guns with a capacity of 5 cartridges. 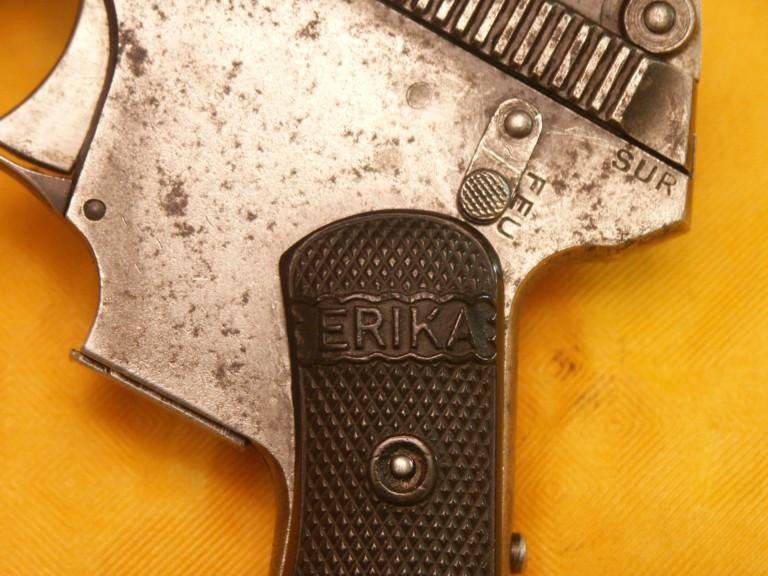 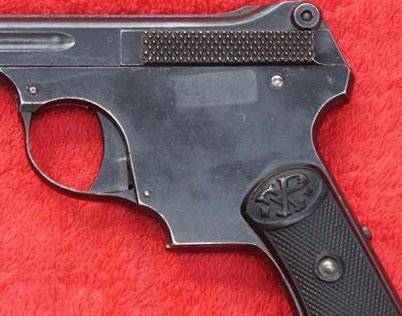 The cheeks are made of ebonite and attached to the frame with screws. On the side surfaces of the handle there is an abbreviation in the form of the initials of the designer Franz Pfannl "FP" or the name of the gun "ERIKA". 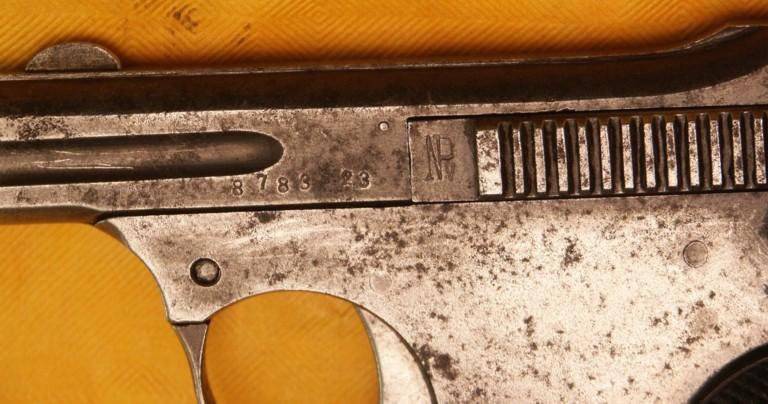 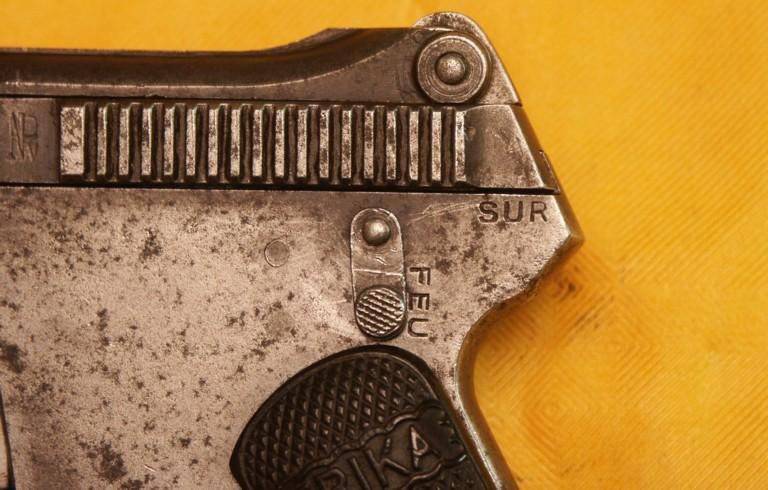 On the parts of the weapon there was another marking, which was applied both on the frame of the pistol and on the gate and the receiver unit.

Despite the fact that the gun was advertised as an ideal pocket pistol for hunters, athletes and tourists, as well as a small caliber of weapon, due to the fact that the store was located between the handle and the trigger guard, the weapon turned out to be quite cumbersome. For the same reason, the pistol grip was not very comfortable to hold in hand. Subsequently, the gun was subjected to modernization, the length of the handle and the barrel length changed, but this did not affect the low commercial demand of the weapon and in 1926 the production of the gun was discontinued. The lack of popularity was also caused by weak ammunition. According to contemporaries, a bullet fired even from a short distance was able to enter a dry pine plank only on 40-45mm. 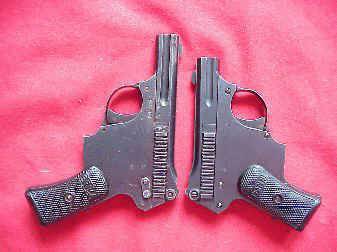 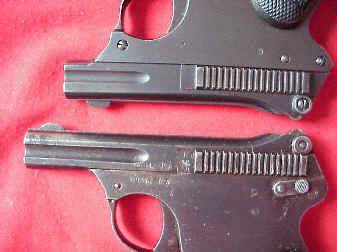 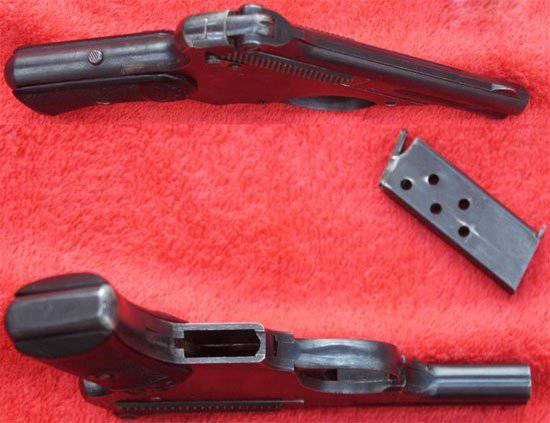 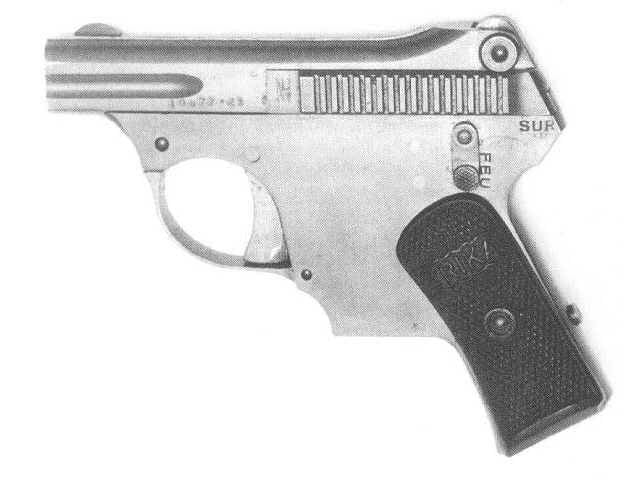 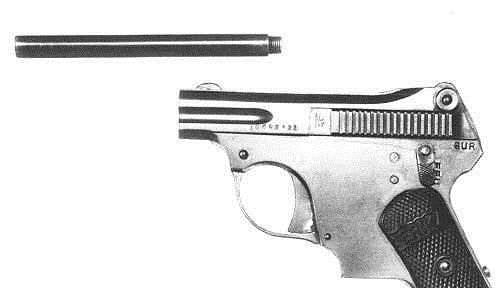 The second model is “short.” The gun had a shorter 42 mm barrel, sometimes equipped with a replaceable 105 mm. The length of the Erika pistol “short” model was 116 mm (with a short barrel) and 180 mm (with a long barrel). The height of the second model gun 85 mm, thickness 19 mm, weight 220 grams. The bore also had 6 right-angle rifling. Pistols Erika "short" model are now much less common than the "standard" model. 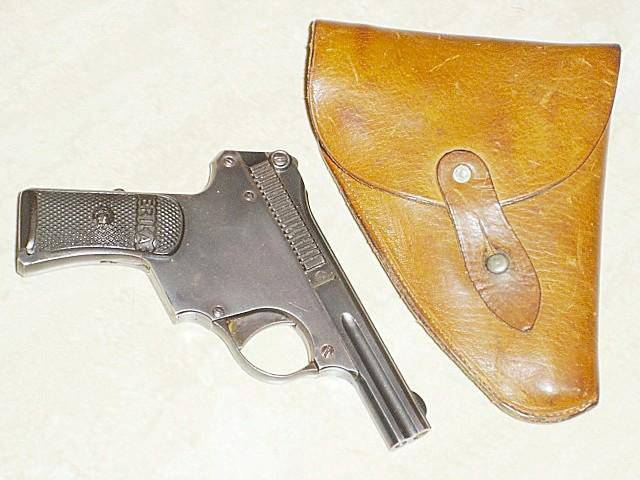 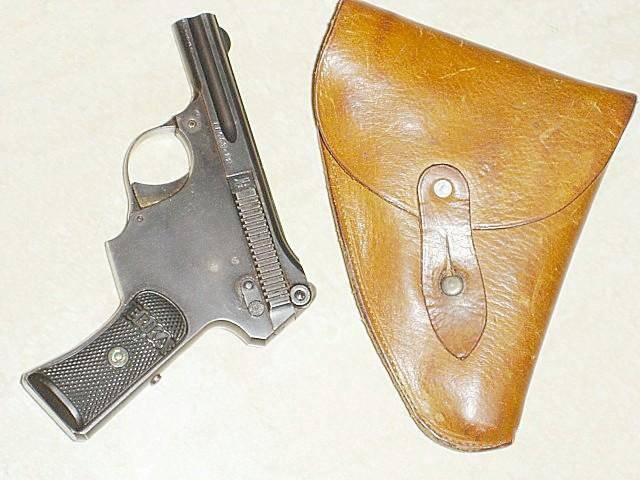 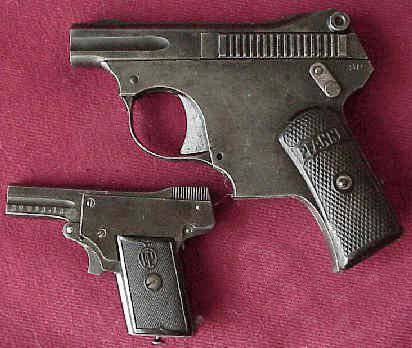 In addition, the pistol is also interesting because perhaps the smallest Kolibri automatic pistol was created on its basis.