Sochi start and its political background

February 8 2014
462
7 February 2014 of the year. Opening XXII (symbolic number - like the Moscow Games) Winter Olympics. For the first time in his new stories The post-Soviet space, Russia (Sochi), hosts the Olympic Games - one of the most significant international sporting events. Athletes from almost nine dozen countries in the world arrive in the capital of the Winter Games to play 98 award sets in 15 disciplines of 7 sports. 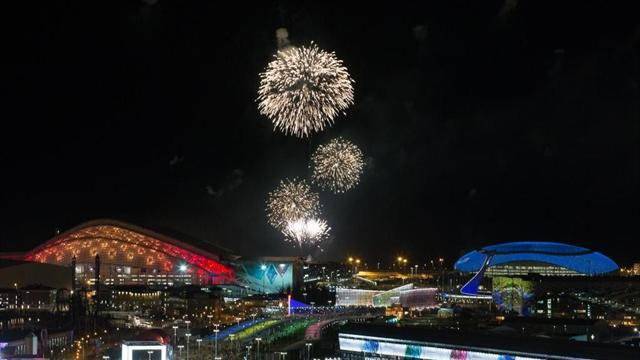 For the first time in the history of the Olympic movement in winter games they will play medal sets in such disciplines as team parallel slalom, slopestyle-snowboard, slopestyle-freestyle. Frankly speaking, we (Russian fans) do not have to count on high places of our athletes in these types of sports program in Sochi, but the fact is - the expansion of the Olympic program takes place, and we also need to be ready for this (sports federations in the first place) . Let's not forget that the Olympiad is not only a bright sporting event, both with its records and successes, and with the bitterness of defeats, but also a very profitable business. One should not forget that the Olympiad is also a policy. In this regard, the Sochi Games, all its participants and organizers would like to wish that the first place was just a sports festival, and business and politics are not too bulging on its background. But if the politics of themselves, as they say, manifests itself “in all its glory”, the “Military Review” team in the “Geopolitics” segment is ready to present to readers materials that will concern the manifestations of the character mentioned.

And if we are talking about the fact that the Olympics are politics, then at the earliest stage of the games it is worth mentioning who of the politicians decided to visit the Sochi games, despite numerous insinuations about “human rights violations” and “frantic authoritarianism” , “Infringement of the rights of sexual minorities” and other tediousness, which we have recently been overfeeding with unenviable consistency.

As everyone remembers, leaders and politicians of several countries around the world, including President Barack Obama, President of Lithuania Dalia Grybauskaite, President of Germany Joachim Gauk and some others, expressed their unwillingness to attend the opening ceremony of the Olympiad, and at the Sochi Games in general. Russian Foreign Minister Sergey Lavrov has already commented on this:

At the same time, Sergey Lavrov noted that the very fact of counting those who came from among the world politicians, and who did not come to the Olympics, is nonsense. Meanwhile, this calculation is underway, and in total at the opening of the 2014 Olympic Games, the “accountants” managed to count more than six dozen leaders of the states that accepted the invitation to both the IOC and Russia.

Publications about the opening of the XXII Winter Games in the foreign press have not been without politics. Perhaps, in three quarters of Western newspapers, the narration of the Sochi Olympics begins with the words "the most expensive Olympiad in history."

American USA Today called the Games "the brainchild of Vladimir Putin," and linking the sporting event itself, including with a reminder of the Cold War between Russia (USSR) and the United States. The same edition, even before the start of the Games, reported very warm weather in the competition venues, which allegedly could have a negative effect on the “American records”. They say that if the American team is not the first, then the weather in Sochi is to blame ...

If you believe meteorologists, then in Krasnaya Polyana (the main territory for the Sochi-2014 sports competitions) the average daily temperature will be around 5-6 degrees Celsius with a plus sign. Next Friday, the ski resorts really expect real spring warming to around + 14 Celsius, but the organizers say that this will not seriously affect the quality of the snow and ice used. By the way, here it is necessary to remind that positive temperatures were also recorded at other Winter Games and World Championships. During competitions, for example, in Turin, the thermometer rose to + 13 Celsius. At the stages of the World Cup in ski sports in the Czech Republic and Austria, athletes went to the track and with + 15. Indeed, one thing is the temperature of mountain air and another is the temperature of snow cover. So, both American and all other athletes in Sochi are in the same weather conditions.
German «Frankfurter Allgemeine Zeitung» looking for parallels between the 2014 Olympiad in Sochi and the 80 Olympiad in Moscow. At the same time, the author suggests the following parallels: “economic stagnation”, “election fraud”, “political propaganda”. And here are the elections, and what exactly is “politically propagandized” for journalists of the German edition at the Olympic Games in Sochi? - it’s not clear, but it’s not important for the newspaper and its readers ... The author, whose name is Reinhard Weser, “responsibly” declares that there is no such person in Sochi today who would support the Olympics, and Vladimir Putin specifically chose As the venue for the Olympics, it is the southern capital of Russia, in order to be able to hide economic waste from preparing for the Games.

Why was Sochi chosen? - This is a question, of course, not without interest (by the way, Putin himself answers it in the recently released film on the Russia-1 TV channel). But if it was German journalists who were guided by the logic, then to heighten the “concealment of economic waste”, it would be “more expedient” to hold the Olympics not even in Sochi, but in the remote Siberian taiga (the more remotely, the better) or in the arctic tundra, building an absolutely new city with houses, stadiums, airports and train stations. So it was possible to "weld" even more ...

In general, one can say: no one can know more about the weather, waste, stagnation, ill-will in Sochi and Russia as a whole, than Western journalists ... Such conclusions do not prevent them from doing even what they may never there were not that in the area of ​​Krasnaya Polyana, but further beyond the walls of the office in the office building of his newspaper.

Politics is a dynamic substance, it will always find a loophole to leak from the vessel set aside for it, taking up new and new spaces. Let's hope that sporting achievements and bright victories this time will leave politics at the Olympics irrelevant.
The opening ceremony of the Olympic Games in Sochi