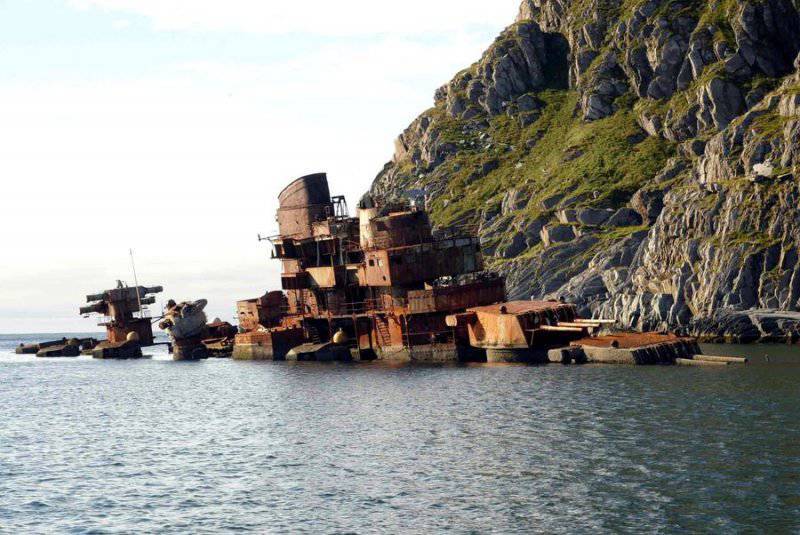 The first intervention of Khrushchev in the military affairs of the country dates back to 1954. Returning from a trip to China, the First Secretary inspected the fleet and came to the disappointing conclusion that the Soviet Navy was not able to confront openly fleets England and the USA.

Returning to Moscow, N.S. Khrushchev rejected the concept of building a surface navy, proposed by Admiral NG Kuznetsov in a memo from 31 March 1954, which generally continued the Stalinist shipbuilding program.

By a decree of the TsPSS Central Committee and the USSR Council of Ministers on December 8 1955, Nikolay Sergeevich Kuznetsov was removed from the post of commander-in-chief of the Navy. From this point on, the USSR chose the orientation on the submarine fleet, the construction of surface ships was suspended, and practically ready-made cruisers began to be cut at the stocks.

February 13 On the initiative of Khrushchev, the next decree “On the unsatisfactory state of affairs in the Navy” was adopted, condemning the low combat readiness of the fleets and blaming the situation for N.G. Kuznetsova.

In January, the Porkkala-Udd naval base “gun at the temple of Finland” ceased to exist. 100 sq. kilometers of Finnish territory, leased to the USSR in 1944, voluntarily-compulsory for a period of 50 years. The unique position, from where the whole Gulf of Finland was sweeping, was ineptly surrendered to the Finns under the pretext of “improving relations with Helsinki”.

In May, on the initiative of N.S. Khrushchev and Marshal G.K. Zhukov were disbanded part of the Marine Corps. The only Vyborg Naval School in the country, which trained officer personnel for “black jackets”, is closed.

A new strike was overtaken by the navy in 1959. In that year, seven (!) Almost ready cruisers were sent for scrapping at once: 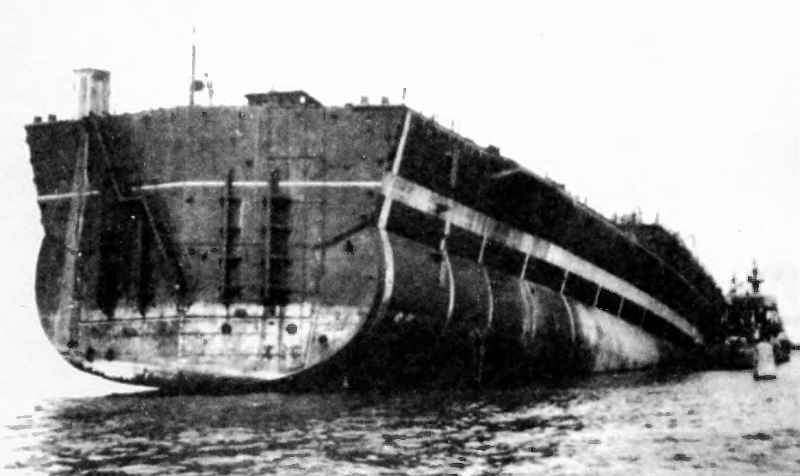 Compartment of the unfinished housing TKR Ave 82, used as a target. It was not possible to sink it with rockets!
Similar история occurred with heavy cruisers of the "Stalingrad" type (project 82), which can be classified as real battleships. According to the project, the full displacement of the "Stalingrad" reached 43 thousand tons. The length of the gigantic ship was 250 meters. The crew, according to the project - 1500 people. The main caliber is 305 mm.

Just a month after the death of Joseph Vissarionovich Stalin, three of the hulk were removed from the stocks and cut into metal. Stalingrad was in readiness 18%. “Moscow” - 7,5%. The third building, which remained untitled, had the readiness of 2,5%.

If it were not for the other 14 cruisers of the 68-bis Avenue from “Stalin's backlog”, which the “reformers” could not reach, I fear that by the end of the 50's, our fleet could have been left without a corresponding surface component, completely submerged. 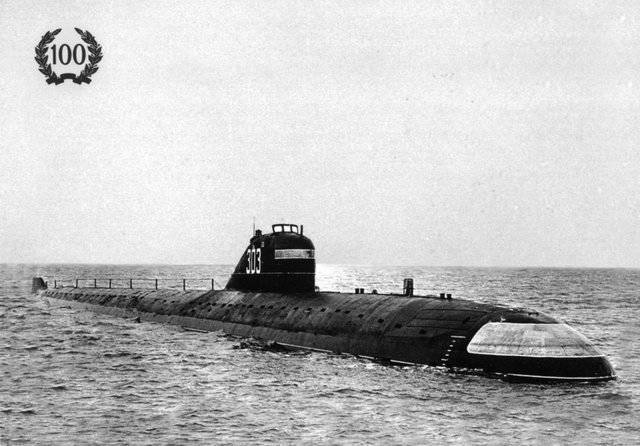 Multipurpose nuclear submarine pr. XNUMHA (November, according to NATO classification). Total in the period from 627 to 1957. 1963 submarines of this project have been commissioned.
Fortunately, the corn lover did not have the courage to touch the submarine fleet. By the beginning of the Caribbean crisis (October 1962), the Navy of the USSR had 17 nuclear submarines, of which 5 was strategic submarine cruiser. For the first time since the Russian-Japanese war, Russian sailors reasserted themselves on the expanses of the World Ocean. In the North and Central Atlantic, in the Pacific and Arctic oceans. In July, the 1962 of the year, the PLA K-3, for the first time in Russian history, was able to pass under the ice to the North Pole!

Meanwhile, Khrushchev continued his eccentricities: the story of the donated squadron of the Pacific Fleet, which, at the whim of the Secretary General, remained forever in Indonesia, gained special prominence. 12 submarines, six destroyers, patrol ships, 12 missile boats ... And the main gift - the cruiser Ordzhonikidze, which became part of the Indonesian Navy under the name "Irian"! 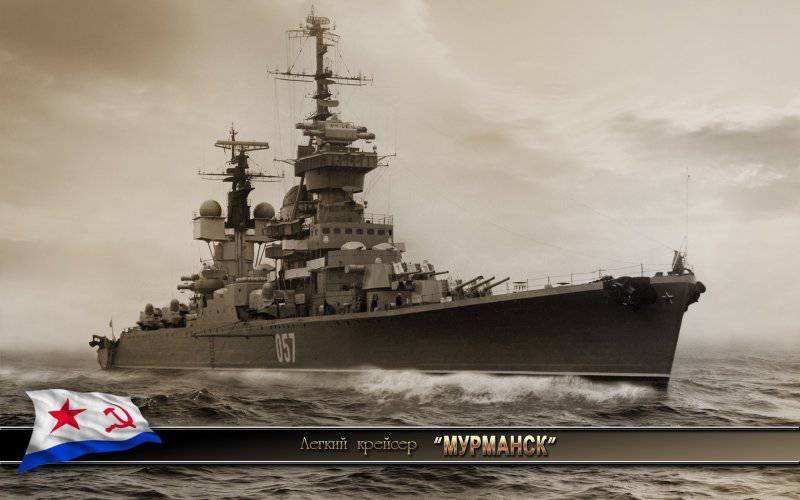 The flagship of the Northern Fleet - TKR "Murmansk". A similar cruiser Khrushchev sold for next to nothing Indonesia!
A whole squadron and hundreds of units of modern military equipment (floating Tanks, fighters), coastal missile systems, 30 thousand sea mines - all this was given to the Indonesians.

"Stalinist" cruisers had a displacement of 18 thousand tons!

Despite the gravity of the post-war devastation, the 21 cruiser was laid in the shipyards of the Soviet Union! Of these, 14 was completed. (All could have been completed if more responsible and competent people had managed the fleet.)

All that remained after the “Khrushchev thaw” from large surface combat ships was two anti-submarine and eight missile cruisers with a displacement of 5-7 thousand tons. 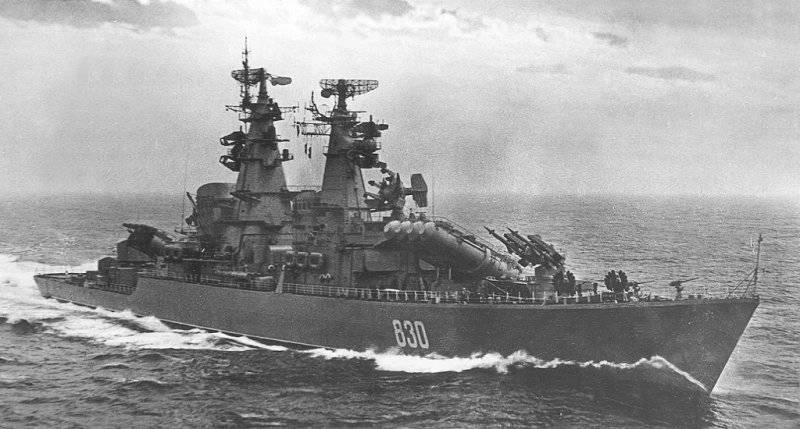 Missile cruiser "Grozny", 1962 year. The world's first ship equipped with two missile systems - anti-ship P-35 and anti-aircraft M-1 "Wave". For the American admirals, it was an unpleasant surprise that the destroyer cruiser 5500 tons in displacement could fire AUGs from the distance 350 km.

“We have a nuclear shield ... our missiles are the best in the world. Americans ... can't catch up with us. ”
- from N.S. Khrushchev for the Presidium of the Central Committee of the CPSU, December 14 1959

Confused about missiles, the secretary general expected to reduce the composition of the Navy even more, but one unfortunate circumstance intervened in his plans: November 15, 1960, the underwater bomber George Washington launched combat patrols. The newest superlodka equipped with the 16 SLBM “Polaris A-1”. The American "city killer" could, in one gulp, "cover" all major population centers in the European part of the USSR.

I had to urgently look for an "antidote."

What did Khrushchev build in exchange for chopped cruisers

An ambitious program to build large anti-submarine ships (BOD) of the 61 project was urgently initiated.

Small, well-tailored frigates with a full displacement of just over 4 thousand tons became the first ships in the world equipped with a gas turbine power plant. 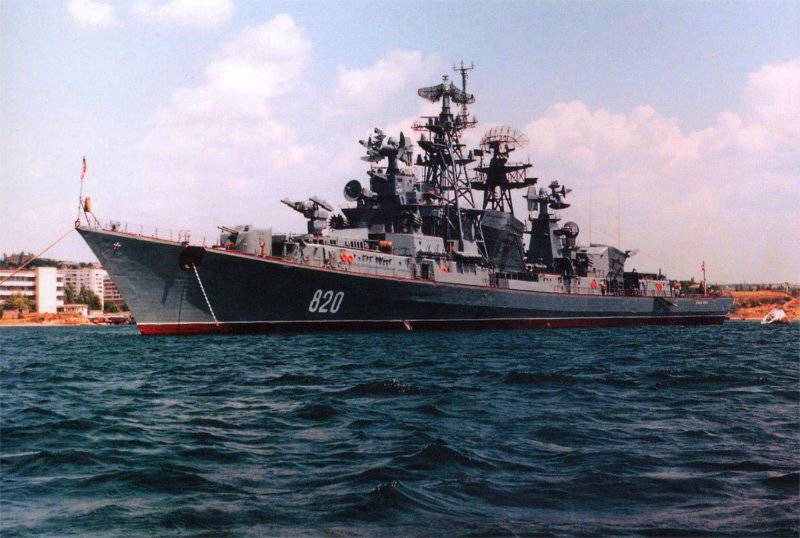 By design, the BOD Ave. 61 was very different from all the ships that were ever built in the Soviet Union. One glance is enough to understand: these are the ships of the new era. They were literally overloaded with radio-technical means of detecting and controlling fire.

Bow and stern air defense systems. Anti-submarine complex with the Titan hydroacoustic station of circular viewing. Bomb missile launchers, self-guided torpedoes, universal rapid-fire artillery with radar adjustment according to radar data, a landing platform and equipment for servicing an anti-submarine helicopter. For its time, the “singing frigate” was a masterpiece that embodied all the best achievements of Soviet science and technology.

Such 20 units were built.

In addition to the BOD, a draft anti-submarine cruiser (1123 code Condor) was developed - the first step towards the creation of aircraft-carrying cruisers. Between 1962 and 1969 Two such ships were built - “Moscow” and “Leningrad”. 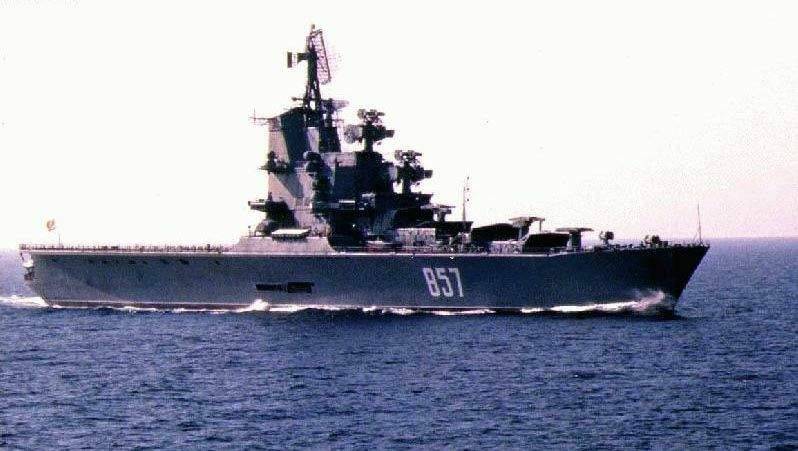 The PLO cruiser had solid dimensions - the full displacement reached 15 thousand tons. At its core, it was a helicopter carrier, but, unlike the current Mistral, the Soviet cruiser, the PLO, had a speed of 30 units and had a powerful armament onboard, including two medium-range air defense systems, the Storm, universal artillery and ... surprise!

So that the American submariners would not be bored, the RPK-1 “Whirlwind” anti-submarine missile complex with nuclear warheads was installed onboard the cruisers (low power - only 10 ct, but that was enough to destroy any submarine within 1,5 radius from the blasting point ). "Whirlwind" shot at a distance of 24 km - almost 3 times more than a similar American ASROC complex.

Despite the “backward Bolshevik technology”, the cruisers were equipped with 7 radars for various purposes, the Orion underdark GAS and towed Vega low-frequency antenna system. 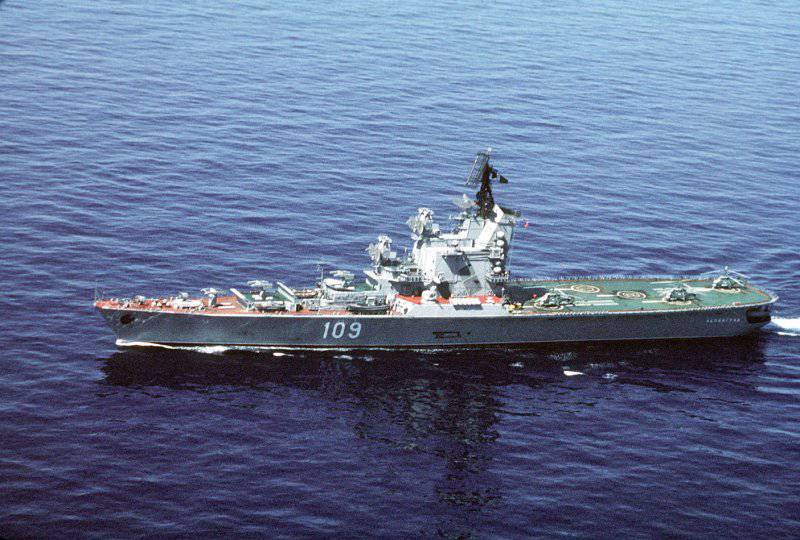 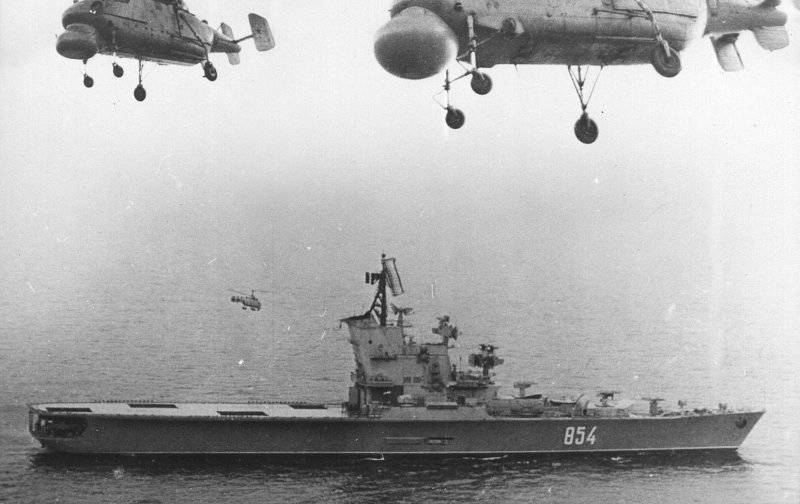 Finally, the main "trick" cruisers - helicopters. A squadron based on the 14 Ka-25PL was based on board. For the placement of aircraft there were two hangar - underdeck and another, in the superstructure, for a couple of duty machines.

Were able to build before!

The Caribbean crisis made further adjustments to the plans of the Soviet leadership.

Nikita Khrushchev was suddenly visited by another, this time positive, thought. In the Soviet Union began the revival of the Marines! (and was it worth breaking to recreate it later with such difficulty?)

In 1963, the Marine Guards Regiment was formed in the Baltic. In the same year, the regiments of the marines appeared in the Pacific, in the 1966 year - in the Northern, and in the 1967 year - in the Black Sea fleets.

Marines require special equipment - amphibious ships, necessary for the delivery of equipment and personnel to the enemy coast. Such ships were designed and built!

From 1964, the serial construction of large landing ships (BDK) of 1171 "Tapir" began. Over the next decade, 14 units were built in the USSR.

It is curious that initially the project “Tapir” was created as a high-speed dual-purpose ro-ro cargo ship (warship / civilian vessel), and not at all for the marines. The Soviet Navy needed a transport ship to deliver military aid to allied countries in Asia, Africa, then everywhere ... "Tapir" was so reliable and tenacious that the 4 BDK of this project is still listed as part of the Russian Navy, performing tasks as part of the "Syrian express trains ".

Among other interesting creations of that era, we can recall the ships of the measuring complex (KIK) - naval radar bases designed to control the flight parameters of ballistic missiles (monitor the testing of domestic and foreign ICBMs anywhere in the oceans). “Chazhma”, “Chumikan”, “Sakhalin”, “Chukotka” ... Their number increased every year. 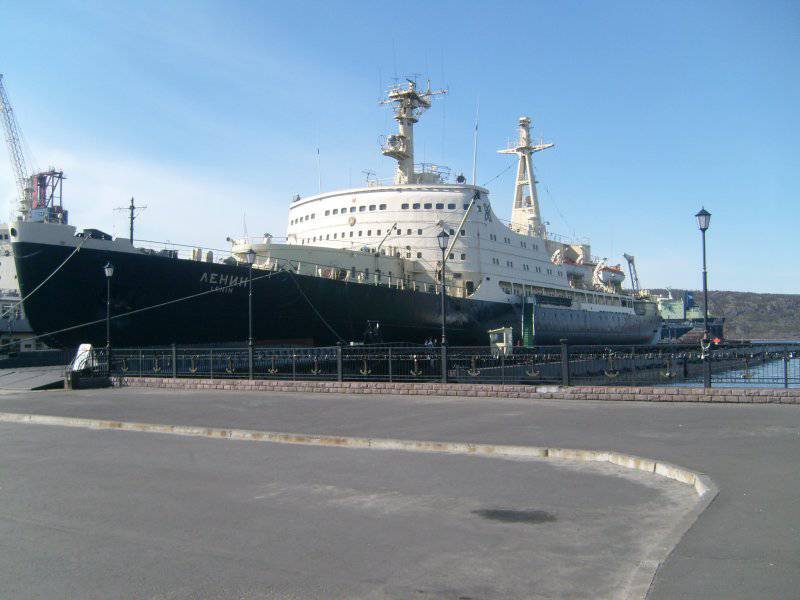 And how not to remember the first nuclear-powered ship “Lenin” in the world with a nuclear power plant!

Even before the official entry of “Lenin” into operation (1960 year), the Prime Minister of Great Britain, Vice President of the USA R. Nixon, the delegation from China visited the board - the whole world watched the construction of the Soviet “miracle of technology”. The appearance of the atomic icebreaker provided the USSR with the status of the sole and full owner of the Arctic.

"Lenin" was able to work for months at maximum power, making its way in the ice shell of the Northern Ocean. He did not need to leave the track for refueling. 20-thousand the nuclear-powered icebreaker was bursting forward through the polar ice - and nothing could stop the mighty ship in its path. 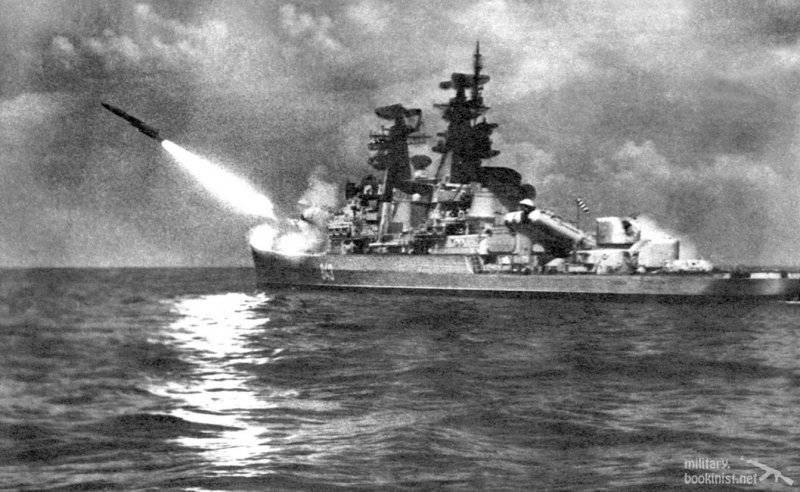 The Soviet Navy was the first in the world to bet on a unique weapon - anti-ship missiles (anti-ship missiles), which were equipped with hundreds of underwater and surface combat ships, including rocket boats. In 1967, a couple of such boats (183-R Komar Ave.) will sink the Israeli destroyer Eilat, causing a shock to the NATO leadership. Russians are coming! They have a new super-weapon!

And yet, despite all the seeming achievements, N.S. Khrushchev cool "broke the wood": all of the above successes have appeared not thanks, but in spite of the efforts of the fan of barren virgin soil and corn.

The ten cut cruisers and battleships, as well as the unjust persecution of the Marine Corps, will be remembered for a long time by the people as the “eccentricities” of the “maize”, who caused irreparable harm to the Russian army, aviation and the fleet. 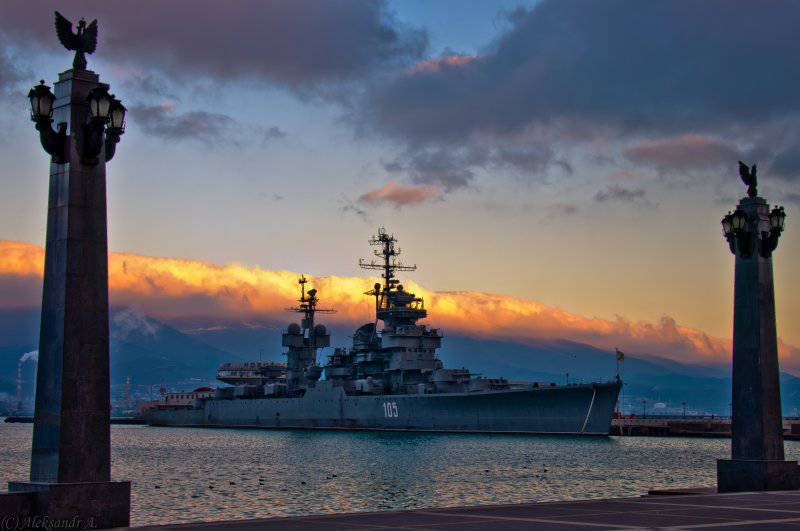 The cruiser-museum "Mikhail Kutuzov" at the pier in Novorossiysk. Stalin quality for all time!

Ctrl Enter
Noticed oshЫbku Highlight text and press. Ctrl + Enter
We are
As Khrushchev, the Soviet armed forces and law enforcement bodies were trashers"We'll have to go to sacrifice"
Military Reviewin Yandex News
Military Reviewin Google News
100 comments
Information
Dear reader, to leave comments on the publication, you must sign in.