"Today is Ukraine, and tomorrow is Russia." Tatar separatists and Islamists are calling for the Russian "Euromaidan" 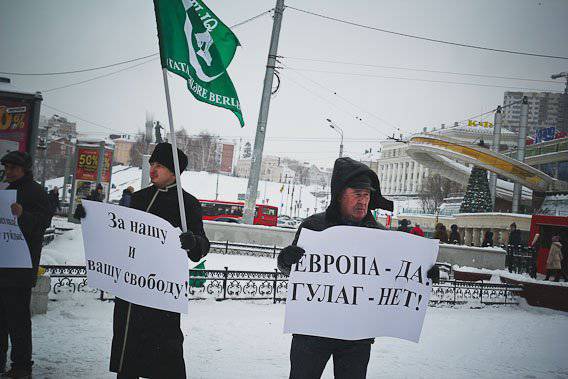 Unfortunately, despite loud-sounding decisions to strengthen measures in the fight against extremists, terrorists and separatists, Tatar separatists and Islamists feel quite free in Russia and continue their dirty deed. No matter how marginally their groups look, the danger should not be underestimated. As you know, the passive majority, not tuned to the destruction of the surrounding space (statehood), always loses to the active minority, which is engaged in “rocking the boat”. Later, people will wonder how small groups of internal enemies were able to destroy a huge state, but nothing could be changed.


A good example is the Soviet Union, which with the connivance of the overwhelming majority of the population was destroyed by a small group of traitors in the ranks of the nomenklatura and active nationalist groups in the Union republics. Another great example is Syria. Stable regime, stable state, ethnic and religious groups living in the world for a long time. However, the active groups of Islamists and liberals, with the support of Western and Eastern (Arab monarchies) of states, turned the state into ruins in a matter of months.

It is very sad to realize that in order to save hundreds of thousands and millions of lives of a great power, it was necessary only to destroy or isolate a small group of activists in time and regularly carry out preventive work, “cleaning” the country from “cancer cells”.

To participate in the events of Kiev led them appeal one of the leaders of the Tatar nationalists Nafisa Kashapova. Kashapov's appeal appeared in social networks in the group “Right Tatars” (“Tatar Bozqurd”). This group has already noted a number of Russophobic and anti-Russian actions. Tatar nationalist urged Russian citizens to repeat the experience of Ukrainian radicals in the center of Kiev. “I call upon my fellow Tatars, the peoples of the Volga region, the Urals and the Caucasus to act on the model and likeness of what the Ukrainians are doing today,” writes Kashap in his address. I must say that his brother Rafis at one time declared himself a friend of a gangster and terrorist Shamil Basayev. And in 2013, he declared support for Muslim volunteers from Russia who fought in Syria against the legitimate government.

Kashapov calls on the opponents of the Putin regime "to organize themselves, not to be afraid of anything or anyone, to effectively help each other." The main slogans should be "self-organization, self-defense and mutual assistance," they should lead to the liberation of people from "dictatorship" and peoples from "oppression and robbery." According to the nationalist, “a democratic, European Ukraine” is a deadly threat to Vladimir Putin, who by its existence gives hope to all the “powerless peoples of the national republics of Russia”. The national liberation struggle should lead to the creation of national states on the territory of the Russian Federation.

Thus, Kashapov frankly spoke for the revolution, the collapse of the Russian Federation and the creation of new national states. Less frank, but close in spirit statements can be found in other representatives of nationalist figures of Tatarstan. So, back in December 2013 in Kazan, a picket was held in the center of Kazan in support of Euromaidan. The participant was the Chairman of the Union of Tatar youth "Azatlyk" ("Freedom") Nail Nabiullin. Chairman of the Tatar "Freedom" Nabiullin сообщилthat the movement supports the “European choice” of Ukraine and stands for the democratization of Russia.

According to Tatar nationalists who arrived from Tatarstan and Siberia, they have been arriving in Ukraine since the beginning of January in small groups of 2-3 people. Some of them are proud to have taken part in the "storming" of the Ukrainian House. According to the Tatar nationalists, as a result of “Euromaidan”, their Crimean brothers with the support of the West (the European Union and the United States) will be able to create their own national state on the Crimean peninsula.

Next will be Russia. As Tatar nationalists say, "today is Ukraine, and tomorrow is Russia." It is obvious that sooner or later revolutionary events will arise in the Russian Federation. Their result will be another collapse of the Russian “prison of peoples”, on the wreckage of which new national states will arise. In particular, the Republic of Tatarstan will receive independence. Moreover, “Eastern Tatarstan” will be attached to it (as nationalists call the Tyumen region). The result will be restored "historical justice ”: the statehood of the Kazan and Siberian Khanates will be recreated. Young Tatar nationalists are confident that all Muslims who come from the Caucasus and Central Asia will support their aspirations.

Even earlier, the revolt of the Ukrainian radicals was supported by the Crimean Tatars. The Crimean component was also marked by the war in Syria. More than a hundred representatives of the Crimean community went to Kiev to help the rebels in word and deed. The Crimean Tatars participating in the Kiev unrest also express readiness to “support our brothers” if their own “Maidan” arises in Moscow or Kazan.

It is obvious that Ukraine is waiting for the escalation of violence. The process has been launched, and it can be stopped only by a series of “point repressions” directed against the bearers of the idea of ​​neoliberalism (liberal fascism), radical Ukrainian and Tatar nationalism. However, the Yanukovych regime is not capable of this, and the West will not allow it. The situation develops quickly and dynamically. More than two decades of collapse and degradation can not affect. Therefore, the connection to nationalist militants, their craft colleagues in the line of Islamic radicalism and ethnic separatism, looks quite logical. Especially if we take into account the fact that an operational “pause” came in Syria, and some Islamist militants began to return to their homeland. Information about the return of jihadists to the Crimea, who received a rich combat experience in Syria, began to appear several months ago. It is doubtful that these people will remain on the side of "Euromaidan". They have the relevant skills and experience, they will be financed by the same structures that kindled the flames of war in Syria. The Islamic Project has been directed against Russia since the time of the war in Afghanistan. The West has used Islamists and Ukrainian nationalists in the fight against Russian civilization for a long time.

Congress of Russian Communities (KRO) of Crimea promulgated correspondence of representatives of nationalist and radical organizations of the Crimea and Ukraine. This was announced at a conference in Simferopol by the head of the CRO Sergey Shuvaynikov. In a letter to a member of the nationalist movement of Crimea, it is said that it is necessary to prepare a “tool” for the “brothers” from the Ukrainian radical organizations. Hunting gear, helmets, sticks, gas masks, “soda in glass bottles”, first aid supplies and “something more serious” are mentioned, since “the game is not shy”.

In addition, one KRO activist reported that he received an order for hundreds of baseball bats, helmets, body armor and gas masks. It is obvious that the Crimean nationalists are preparing to support the "Varyags" from the western regions of Ukraine. Chairman of the Council of Ministers of the ARC, Anatoly Mogilev, has already urged the inhabitants of the peninsula to be vigilant and jointly stop possible provocations. One of the radical action scenarios could be the seizure or blocking of administrative buildings, which could cause ethnic conflict and become one of the “mines” that would destroy the Ukrainian statehood.

It is necessary to clearly realize that from this struggle for "democracy", "freedom", "independence" to the death of millions of people - just one step. Russia has already experienced a catastrophe twice in the 20th century. Now the internal and external enemies are again trying to destroy it.

The most favorite method of the enemy is when people themselves "demolish" their state. The West helps with money, organization, prepares propagandists, managers. It creates an active aggressive core, which collapses the state from the inside. After the collapse, you can gradually absorb and assimilate the wreckage. So, the Romanian press already сообщает about a certain plan "Romagna Mare". The Romanian leadership is ready to introduce special forces and troops into the Ukrainian territory. With the increasing chaos and civil confrontation in Ukraine, Romania is ready to act without consulting with its NATO allies. Romanians are ready to occupy the territory of the Chernivtsi region of Ukraine and part of the Odessa region. Moldova and Transnistria will also go to Romania. After the occupation of Chernivtsi and parts of the Odessa region there will be created pro-Romanian state formations, which will soon be included in the “Great Romania”.

As a result, we observe how Europe is rapidly returning to the situation of the 1930s, when opponents of Russia-USSR actively cherished plans to build “Great Romania”, “Great Poland”, “Great Finland” and “Great Germany” at the expense of the Russian lands. Russophobic, fascist and neo-Nazi ideology is reviving rapidly. The situation is aggravated by the offensive from the southern strategic direction of the "Islamic project", which already has a developed underground in almost the entire territory of Russia. If, under Stalin, the country was ready to withstand the blow of the enemy and almost completely suppressed the "fifth column", then in our time ethnic separatists, jihadists and liberal fascists feel great in Russia.

The Union of Liberals, National Separatists and Islamists is a terrible threat that promises rivers of blood to Russia. The mobilization of society, the restoration of the values ​​traditional for Russian civilization, and the informational, physical clearing of the “fifth column” are necessary. This will allow Russia to withstand a new wave of global crisis.

Ctrl Enter
Noticed oshЫbku Highlight text and press. Ctrl + Enter
We are
Results of the week. "We will build this, that from Mars they will look and be surprised!"Situational analysis of the death of the MH17 flight (Malaysian Boeing 777), made on the basis of engineering analysis from 15.08.2014
Military Reviewin Yandex News
Military Reviewin Google News
253 comments
Information
Dear reader, to leave comments on the publication, you must sign in.