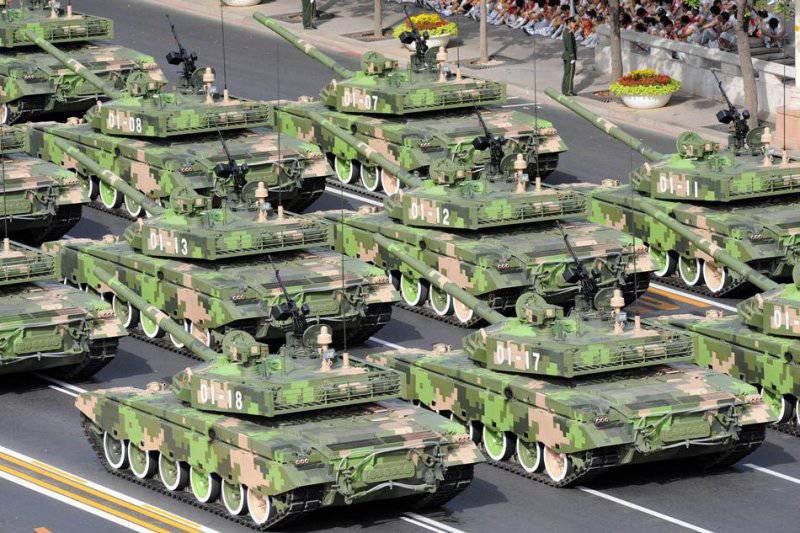 Observers from the international consulting company IHS state: in recent months after a four-year recession, global military spending has gone up, and Russia and China are increasing their military production most actively. NATO experts are already worried about this, but Russian analysts reassure them: Russia is only restoring the potential lost after the collapse of the Soviet Union, and replacing outdated military equipment with modern, that is, the Russian military-industrial complex has not yet begun to work at full capacity, but only only "accelerates." The same can be said about China, which only recently began producing truly own military equipment.

The global financial crisis in 2009 collapsed the defense budgets of almost all countries of the world. Austerity led both Americans, Chinese and Arabs to abandon many ambitious projects. However, the crisis is coming to an end: according to observers, in 2014, spending on armaments will begin to grow again, and even faster than before the start of financial problems. Russia, meanwhile, is also recovering from the recent crisis and has already managed to pull itself up from fifth to third place in the ranking of the states with the largest defense budgets. Ahead - only the USA and continental China, the United Kingdom and Japan remained behind.

According to the international company IHS, in the coming years, India, China, Oman and Saudi Arabia will become major players in the arms market. Major manufacturers and buyers weapons will be in Asia: European and American manufacturers will lag far behind their Russian and Asian competitors.

As for Russia, IHS predicts that the size of the Russian defense budget in the next three years will increase by 44 percent. If in 2013, defense spending amounted to 68,9 billions of dollars, by 2016 they will increase to 98 billions. Agency staff suggests that the bulk of the funds will be spent on weapons upgrades.

In addition to Russia, the NATO bloc fears the Middle Eastern states: the arms race in the Persian Gulf continues. As always, Iran is to blame for everything: Oman and Saudi Arabia are arming themselves in order to survive in the event of war with the Islamic Republic. Nearby is also Israel, whose intentions to unleash a war with Iran are quite clear. So Tehran has to arm itself in order to counterbalance three regional players at once, not counting the United States and the NATO countries. If Iran weakens a little, the war is inevitable: the West and the Gulf monarchies are unlikely to risk attacking a state capable of giving an adequate response.

Saudi Arabia, wanting to outrun Iran, has tripled the cost of buying weapons over the past 10 years. The modern Middle East is similar to Europe on the eve of the First World War, when the leading powers bought weapons on an unprecedented scale.

IHS observers became interested in China. Already in 2015, the defense budget of this country will exceed the defense budgets of Great Britain, France and Germany combined. Together, Russia and China will spend more on equipping their armed forces than the European Union. However, the PRC, like Russia, has just started: the Celestial Empire is so far limited to replacing obsolete weapons. For example, China recently made a huge leap by abandoning 2nd generation fighters in favor of 5th generation aircraft: the 3rd generation had to jump in a hurry so as not to lag behind the West and Russia. On the navy things are the same: the PRC plans to launch its first aircraft carrier in the near future. Prior to that, Beijing bought all aircraft carriers abroad, and then converted it to fit its needs.

World gendarme is afraid of his equal in strength

However, despite the growth of the military-defense complexes of Russia and China, the United States of America still occupies the first place in the world in terms of the cost of purchasing weapons. The world gendarme does not plan to abandon his baton: Washington cares that no one can challenge him. However, this year, the States plan to reduce their defense budget by 1,3 percent from 582,4 billion to 578 billion dollars. This is largely due to the end of the war in Afghanistan: the cost of "maintaining peace" in this country reached astronomical sums.

It will not be easy to catch up with the United States: for comparison, the defense budget of China, which ranked second in the IHS ranking, has the size of 139,2 billion dollars, and Russia, which is in the third place, has 68,9 billion. It is obvious that China is still weak in order to stand alone against the States. But NATO experts warn politicians in advance: if current trends continue, when US defense spending is gradually declining, and China is growing, the North Atlantic Alliance may be in an uncomfortable situation.

Interestingly, another important member of NATO - the United Kingdom - also reduces the cost of equipping the armed forces. Thus, over the course of 2014, its defense budget will decrease by 3,6 percent and amount to 57 billions of dollars. The UK is fourth in the IHS rankings, its neighbor France is in sixth place with 53,1 billions of dollars.

However, in the confrontation with China, the United Kingdom and France will not help the States. During the Cold War, the Iron Curtain mainly passed through Europe, and therefore the NATO bloc was face to face with the Department of Internal Affairs. However, the North Atlantic alliance is completely unsuitable for confrontation with China, located on the opposite side of the globe. The only help that NATO can provide to the United States in the event of war in the Pacific is just a few warships and small special forces groups. The rest of the fleet will be forced to patrol the Mediterranean Sea and the Somali coast: Europe will not be deprived of these strategically important reservoirs with its attention.

That is why now Washington is counting on cooperation with Asian states and pushing them towards militarization. For example, in 2013, Japan’s military budget exceeded French defense spending: for the first time in 10, the rising sun began to actively invest in the development of self-defense forces. In the IHS ranking, Japan ranks fifth right behind the UK, and only two positions separate it from China.

Thus, the Yellow Sea and the Pacific Coast of China is another area where, along with the Middle East, there is an intense arms race. At the same time, we should not forget about North Korea: although it did not get into the top 5 IHS, it is still actively developing its nuclear program and making all possible efforts to ensure that it does not yield to its southern neighbor, as well as Japan.

The growth of the defense budgets of Russia, China, the countries of the Middle and Far East is viewed by NATO as one of the most difficult challenges of the 21 century. So, according to Anders Fogh Rasmussen, as a result of the arms race, Washington may lose its current influence, and many players will appear on the international arena, “Who do not necessarily share our interests and values”. Simply put, the United States fears the answer to their own tricks: when they are among equal strengths, America will become confused and engage reverse gear.

It can be concluded that there are several arms races in the world right now: global - between the USA and other states, Middle Eastern - between Saudi Arabia, Israel, Oman and Iran, and also Far Eastern - between China and Asian allies of the USA. It is difficult to say how each of these confrontations will end: each of the players pursues extremely pragmatic goals, while ideological differences have faded into the background or are completely forgotten. Many faults are quite surmountable, and if someone offers a reasonable compromise to the opponents, the war will be avoided.