Olympics in Sochi and respect for their country 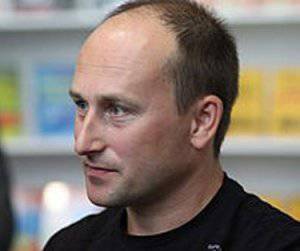 On Friday in Russia will begin a sports festival of international scale. We will root for our athletes, support them and hope for the success of the Russian team.

And the more offensive to see that officials from the sport does not want to understand the simple and obvious truth. Respect for one’s country begins with respect for the language of the country. The great and mighty Russian language cannot be forgotten or postponed for the sake of the language of a foreign country.

Even in the autumn, the Great Fatherland Party held a series of pickets and rallies throughout the country under the slogan "The Russian team should be at the Olympics, not Rashi!" And "We write" Russia "in Russian!". We said, addressing the wide Russian public and sports officials, that the name of the national team of our country should be written in Russian, not in English.

The answer to the air defense calls were papers from the Russian Olympic Committee, in which they explained to us that it was “accepted” to write the name in English.

In the USSR, the name of the national team was written in Russian, nothing prevents to do so today. Nothing but the inactivity of sports officials who cannot understand basic things. First of all, you must respect the citizens of your country and the whole Russian world, who should not read the name of Russia in the English version - “Rush”

We love Russia, not Rush. For Russia, our grandfathers, fathers and our contemporaries shed and shed blood. They gave and give life. And we should transfer Russia to our children, not Rush. 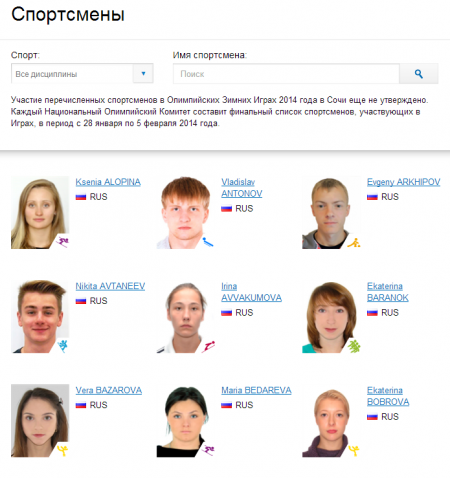 And for some reason, officials cannot understand this. What should they duplicate the name of the country in Russian? There are no prohibitions on spelling in Russian in the Olympic rules! Hockey players and the proud inscription "Russia" on their sweaters is an example.

Open the site of the Olympic Sochi, go to the page of our team. Thank God, the site is in Russian. Early rejoice!

We look more attentively. And we see that the name of each athlete from the Russian national team is written only in Latin. The names and surnames of Russian athletes in their native language are not written.
You see it as it is.
But as it should. The names of our athletes should be large written in Russian. Duplicate (just duplicate) smaller Latin letters next to the "great and mighty." Point.

Is it hard to do? Do you need a lot of time? Nonsense. There is no understanding - there is nothing. Mikhail Bulgakov said quite correctly in the words of Professor Preobrazhensky: "Razruha in the head!"

Trifle? No, not a trifle.

The Sochi Olympics should be an example of respect for their country and native language. And this respect should be everywhere: from street signs to the inscription on the backs of the national team.

The Olympics will pass, and the ruin in the heads of sports officials, alas, will remain. And we need to win it together.

Ctrl Enter
Noticed oshЫbku Highlight text and press. Ctrl + Enter
We are
What you didn't want to know about EnglandPyrrhic victory of Riga - ...
Military Reviewin Yandex News
Military Reviewin Google News
167 comments
Information
Dear reader, to leave comments on the publication, you must sign in.