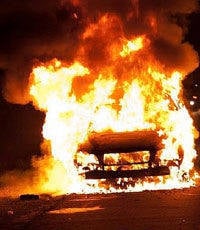 Arson of Maidan activists' cars is revenge for the attacks of the so-called. "Self-defense units" for civilians who disagree with the views of revolutionaries.


The corresponding video message was distributed by the organization Red Sector, which took responsibility for the arsons of Avtomaidan’s auto representatives.

“In our organization, those who have been fighting, but are on a peaceful path, have gathered. When we saw what was happening in our country - this chaos, that the Nazis, the radicals, the “Right Sector”, the “self-defense” and the protection of the Maidan — create - we decided to defend our country. Everyone thinks that we are the same radicals as the Right Sector. Not! We are the ones who came to save our country. And they have to see that we are decisive and strong, ”a representative of the Red Sector speaks to the camera, hiding his face.

As an example, he cites the recent incident on Khreshchatyk, when the driver, who demanded that the revolutionaries with flags release the roadway, was attacked by seven Maidan activists at once. True, the attackers suddenly received a fitting rebuff - the guy-driver alone managed to deal with his offenders.

“When this record was made public, Maidan had no choice but to apologize to this person. But the protection of the Maidan - "Right Sector" and "Self-Defense" - promised him revenge. Subsequently, this man burned the car. We were outraged and adequately answered. We burned 60 vehicles of those who attacked a resident of Kiev, ”the representative of the Red Sector stressed.

According to him, “the burning is stopped on this.”

“But we want to say: another arson, another attack on the car, and for each car another 60 of your cars will burn. One more car - and your land will burn under your feet, ”the activist warns.

“We believe that there is no reason for war, we must live in peace. But if you break the rules, attack the police with sticks, seize buildings, attack citizens you suspect that they are titty, know that we are always there and we know you. Today we will publish all your photos and names, ”he added.

The representative of the "Red Sector" clarified that he knows that the radicals from Maidan "recruit fifteen, sixteen, twenty-year-old boys, assuring them that who is stronger - he is right, who is wearing a helmet and a mask - can do what he wants."

“I warn parents, fathers and mothers, brothers and sisters. If any of your loved ones are in radical groups, expel him from there. Explain that the time of the games has passed. The Right Sector is preparing for attacks, arsons, and terrorist actions. We will respond adequately to each of them, ”he promised.

“If you don’t feel sorry for your people, stop doing radical actions, push the country into conflict. For every person you have killed, burned, we will score your 10. One to ten, remember this. A young guy, going out to throw an incendiary bottle, know: how that person burned down, so do you. The young guy who comes out with a stick, remember: you will be beaten with the same stick ten times more. Who is trying to shoot his comrade on the Maidan in order to point at someone else - know, you are under our supervision. We will find and destroy you. Whoever comes with a sword to us will die of that sword, ”they clarified in the Red Sector.