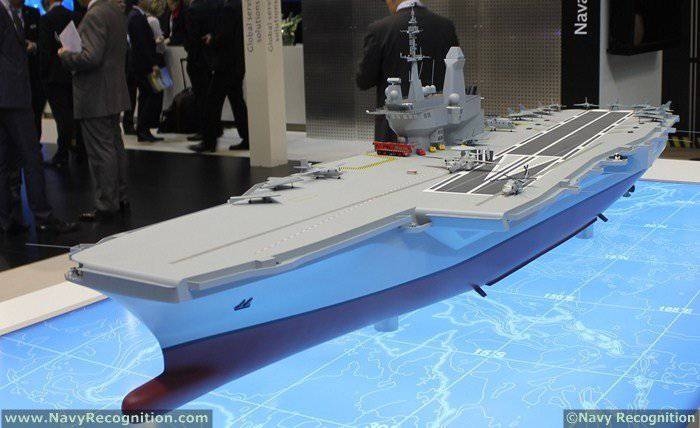 At the Defexpo 2014 exhibition, the French shipbuilding company DCNS will present the model of the DEAC aircraft carrier (DCNS Evolved Aircraft Carrier, in the photo), the project of which is based on the design and aircraft fleet of the atomic aircraft carrier "Charles de Gaulle", February reports defenseworld.net 3.

On a prospective aircraft carrier, it is possible to operate all types of ejection take-off aircraft, including DRLO aircraft. It is equipped with all modern technologies, the latest conventional power plant, a ship hull stabilization system, the possibility of basing unmanned aerial vehicles.

In addition to the aircraft carrier, the company offers “individual technology transfer” and services for the creation of home infrastructure (including the construction of a naval base and technology for material and technical services). 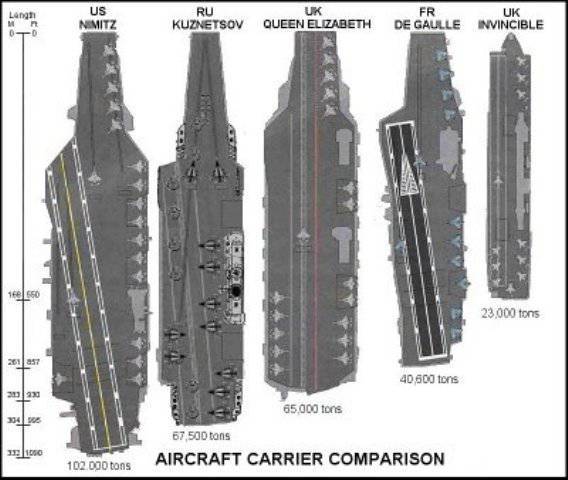 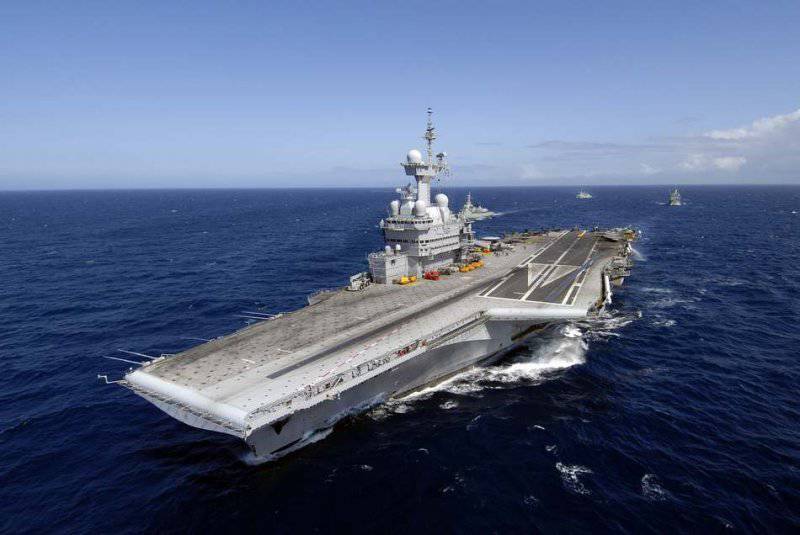 For the take-off of the aircraft are two steam catapults C-13F, manufactured in France under the American license. Aerofinists are able to take one plane every 36 with. Submission of aircraft from the hangar to the flight deck is carried out by two elevators located on the starboard side. A characteristic feature of the air group is the predominance of strike aircraft and the absence of anti-submarine squadrons. For comparison, American aircraft carriers of the Nimitz type with a displacement of about 100000 t carry 48 fighter-attack aircraft and 8 anti-submarine helicopters.

The data transmission systems (NATO standard Link-16 and Link-11 systems) allow you to transfer information about the tactical situation from the Hokai AEW aircraft to the ships and aircraft of the compound.

The air defense systems installed on the ship are designed exclusively for self-defense, which corresponds to the American concept of assigning the air defense of the compound to escort ships.

The ship has a Satrap stabilization system, which supports roll within ± 0.5 ° and allows aircraft to be raised and received during an 6-point storm.

So, an interesting offer: you can not buy (where to put a comma?)
As potential buyers, apparently, are considered India, China, Russia ...

If we consider the purchase in relation to Russia:
"pros":
- tested and used in operation type,
- purchase of technologies and equipment: catapults, airborne early warning systems, UAVs, BIUS;

"minuses":
- imposed restrictions on the use of technology against the seller (NATO, USA) - do not apply;
- not entirely successful experience in the use of the prototype, more than half of 20 years of operation - standing by the pier and only one conditionally successful trip;
- risks, political and financial. Surely a generation of "cowboys" will try something to fuck with it - to veto the supply of E-2, catapults ...

On the other hand, the experience of buying Mistral (1,12 billion euros for two helicopter carriers) suggests the possibility of reaching an agreement and acquiring technologies. At the same time, the same purchases ate a possible disposable budget that could be used on aircraft carriers. At least a couple. One assembly in France, for example, and the other in our shipyards ...

On the third hand, maybe not in a hurry yet ...

For example, the Chinese (and we too) will introduce ballistic long-range anti-ship missiles to combat duty, you see, the prices of aircraft-carrying technologies will fall. Wait and see. Time is the best arbiter.