The two capitals counted the annual number of immigrant crimes.

February 7 2014
79
A few days ago, representatives of the Investigative Committee presented statistics on the number of crimes committed by migrants. The statistics so far affected the capital cities of Russia - Moscow and St. Petersburg. The publication of statistics related specifically to these cities is primarily related to the fact that the immigration flow from a number of countries of the near abroad goes to the Golden-domed City and the City on the Neva. 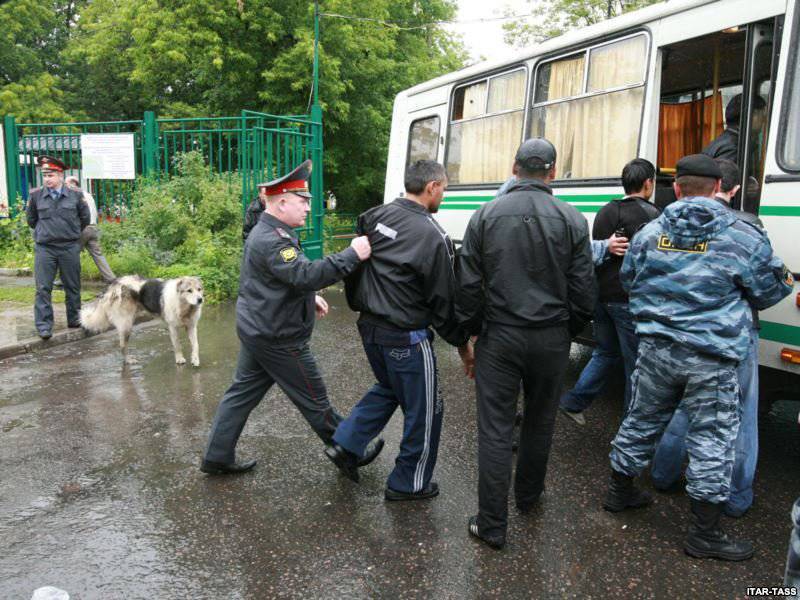 So, the statistics of the RF IC on immigrant crime looks like this.

Moscow. Information was provided by Vadim Yakovenko - Head of the Main Investigation Department of the Investigative Committee of the Russian Federation for the city of Moscow.
For 2013, the year recorded more than 36% increase in the number of crimes committed by people who arrived in Moscow from foreign countries to study or work (first of all, we are talking about the CIS countries). In total, foreign nationals committed about 11,5 thousands of crimes in the past year. About 20% of all murders and 43% of all crimes of a sexual nature (rape) were committed by foreign citizens. At the same time, Yakovenko admitted that these are only those data that, as they say, were “in the hands” of the GSU RF IC in Moscow. In reality (and these are the words of Yakovenko himself) the figure can be significantly higher:

It is obvious that the real crime rate of foreigners is significantly higher, since statistical records of these crimes are conducted only from the number of those already solved.
The overall level of crime among migrants was estimated by the head of the Central Investigation Department of the capital at 60-70%.

At the same time, Vadim Yakovenko also singles out those countries, the visitors from which commit the greatest number of crimes in Moscow. According to him, this is Uzbekistan, Kyrgyzstan and Tajikistan. Yakovenko also noted that cases of extremist activities conducted by foreign citizens in the Russian capital have become more frequent. He mentioned the initiation of criminal cases in 2013 against citizens of Tajikistan and Uzbekistan who disseminated extremist literature and conducted active extremist propaganda near mosques in Moscow.

In the metropolitan prosecutor's office confirm the increase in crime by foreigners. The head of the Moscow prosecutor's office, Sergey Kudeneyev, stated that the total number of crimes committed by “non-Muscovites” is more than 26 thousand per year (the results of 2013 of the year). Such crimes are committed not only by visitors from the former Soviet republics, but also by “guests of the capital” from other regions (first of all from the regions of the Caucasus). Here the growth is 12% per year.

In the Moscow prosecutor's office complain that the situation with the detection of crimes is still not the best way. Detection of theft is only 17,2%. And if there is a small, but growth in comparison with the 2012 year, then the detection of such crimes as illegal traffic weapons, counterfeiting, drug sales and completely worsened in relation to 2012.

However, after the speech of the prosecutor, Sergei Sobyanin took the floor, who declared that the detection of crimes committed by migrants in Moscow had increased by a third ...

St. Petersburg. Data from the acting head of the Federal State Investigative Board of the RF ICS for St. Petersburg Alexander Klaus
In 2013, the increase in the number of crimes committed in the northern capital by foreign citizens was recorded at 34%. Every sixth rape and every fifth murder is committed by migrants of this status. Almost half of all crimes and offenses in public places were made by “guests” of St. Petersburg from the republics of the former USSR.

As for the social portrait of an ethnic criminal, this is a man from 20 to 30 years with primary or incomplete education, who moved to Russia without labor clearance. But do not cultivate ethnic intolerance in society. Crime has no nationality. And in our country it is not a matter of nations, but of the victory of lack of culture.

Alexander Klaus, despite the words that the criminal has no nationality, built up the presentation of these figures very expressively, noting the three "main" segments of the so-called ethnic crime. According to the GCS CS in St. Petersburg, these segments are as follows: 48% of “migrant” crimes were committed by citizens of Uzbekistan, 16% by citizens of Tajikistan, 9% by citizens of Azerbaijan. At the same time, Klaus openly stated the need to solve the problem of the virtually uncontrolled influx of migrants in St. Petersburg.

Alexandra Klaus:
Often, migrants, including illegal ones, get stuck together in outright gangs, terrorizing the local population. A number of districts can simply turn into a ghetto, where the law does not work, but real power is in the hands of parochial authorities.

So, representatives of the investigative committee and the prosecutor's office expressed their data about the increase in the number of migrant crimes. These figures say that if control of migration flows were real, then in 2013, this would save at least 15 thousands of human lives in capital cities alone. If the control of migration flows were control, and not the protection of these, the number of thefts alone would decrease by almost a third.

It turns out that the state, trying to get cheap foreign labor, eventually loses a lot of money trying to first somehow take into account and "streamline" all arrivals, and then loses money also on the need to implement a criminal law letter for criminals with a foreign passport . One day of suspect being held in an average remand prison costs the budget about 320 rubles (food, heating, lighting, use of sanitary communications, supervision, etc.). And in the capital cities, this figure is significantly higher.

If we take into account the number of crimes committed by visitors from CIS countries in Moscow alone (11,5 thousand per year), and if we consider that everyone spent in the detention facilities, even about a week (although in some cases the detention time was several months), it turns out a very round number of losses for the city budget - almost 26 million rubles. This is only what is called objective losses (minimal), and what losses the state treasury incurs from actions to uncover “migrant” crimes! And this loss is economic, and in fact there is also, perhaps, more serious - humanitarian ones. Gone lives, torn apart the fate of hundreds and thousands of Russians.

Of course, you can think about the fact that criminals are full among the citizens of Russia (including the indigenous people of Russian cities). So no one is going to deny it. The fact is that “not ours” are added to “our” crimes. The criminal pyramid is only growing, and it is growing more actively in the immigrant segment and precisely in the major cities of the country.

Given the level of losses incurred by the Russian treasury from criminal activity in the migrant segment, one can hardly be inspired by the words about the allegedly great benefits of attracting labor migrants to Russia. If it is profitable for private owners to hire a guest from a sunny republic (the pay is less, the responsibility is less, social guarantees are zero), it is extremely difficult to understand the statesmen who say something like “guest worker will help us”. What will help? - Drank the budget or throw out budget money for training, vocational training and, finally, for criminal procedure? Is this a state masochism or political "taxiing" with closed eyes? ..

Ctrl Enter
Noticed oshЫbku Highlight text and press. Ctrl + Enter
We are
Ethnic crime - a threat to the national security of Russia and other countriesCrime in Russia as a threat to national security (with statistics from the Ministry of Internal Affairs of the Russian Federation)
Military Reviewin Yandex News
Military Reviewin Google News
79 comments
Information
Dear reader, to leave comments on the publication, you must sign in.