February 7 2014
206
When you read analytics about “euromaidan” and other events in Ukraine, even in respected Russian media, the number of myths and speculations, often uncritically taken from Western colleagues, are striking. The most common is about the Ukrainian oligarchs, which the European Union allegedly “holds” for their billions in Western banks, and through them presses on President Yanukovych. 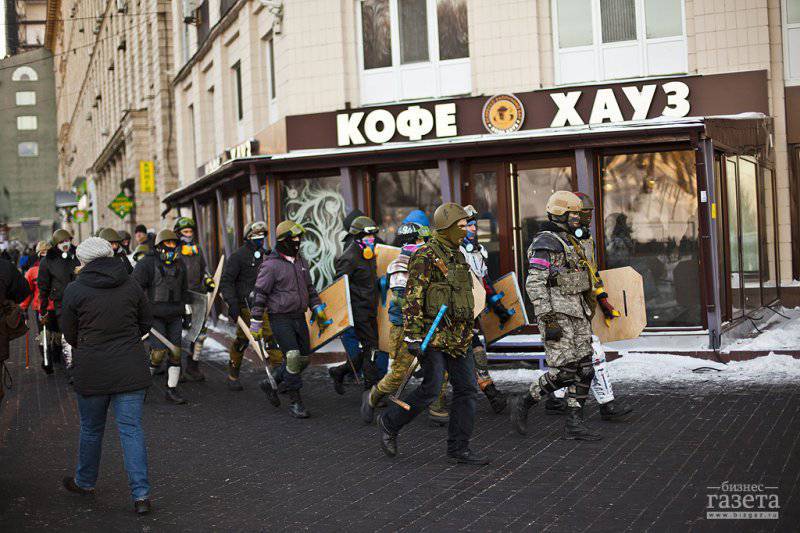 The billionaires, it turns out, are “stupid”, according to the satirist Mikhail Zadornov, and all their money is deposited in one or two Western banks. That is, they are dumber than housewives, and all of their “eggs” are kept in one basket. For the convenience of confiscation.

There is pressure on the Ukrainian oligarchs, of course, and there is still a lot of bluffing. If the EU really confiscates some Ukrainian billions, then tomorrow it will remain without Russian, Kazakhstan, Indian, and God knows what else! This is a very dangerous financial expropriation for Europe! Moreover, the Ukrainian oligarchs will not be scared by this. Deposits in Western banks are, after all, banknotes, but assets in Ukraine are what brings them. What is more important? Apart from the fact that they can lose the Russian market, and these are also many billions. And if a “Euro-association” breaks out with a revolution, then they can lose their assets, and even their lives.

Obviously, Gazeta.ru wrote objectively about the Ukrainian oligarchs, that they, for the most part, have now rallied around Yanukovych out of fear of the "black revolution." “In recent weeks, the most influential of them have begun to unequivocally support the government. The oligarchs were afraid of chaos. If a change of power occurs in the current situation, a hard repartition of property is inevitable, since the confrontation has reached bloodshed. They are frightened by the freezing of accounts in Europe, but if now some Tyagnibok comes to power, they will lose everything. Perhaps even freedom. For this reason, it is the oligarchs who are pushing Yanukovych today to the tough scenario of dispersing the Maidan. Yanukovych himself is slow, therefore the oppositionists are still allowed to occupy the center of the city. ”

Yanukovych hesitates, perhaps, simply because Putin has the Olympics on the nose, and Ukraine has nowhere to hurry: the center of Kiev is already crushed.

In general, Western analytics for the most part are propaganda propaganda that justifies the mistakes and failures of the West, and gives out the desired for the inevitable "democratic" future. Zadornov laughed that in the US there are only seventeen smart, even brilliant people, then there are only two analysts - Brzezinski and Kissinger. It’s on these two mighty old people that the whole American analyst is holding on, but they are no longer enough, the young “brilliant experts,” like McFaul, are slaughtered by their sound reasoning, so the United States has dealt with everything Putin since the end of the 2000s.

However, we should say thanks to McFaul for his masterly failure of the Russian “belolentochnoy revolution”. This expert on orange coups is now leaving Moscow, and after him the predictions about the future “Maidan” in Russia are rushing; they are pleased with their debility. Even McFaul realized that in Russia there was nothing more to catch, and the crying of “Rain” was his farewell salute.

Robert Gates, the former US Secretary of Defense, could not stand it, and in his memoirs he gave vent to anger and sarcasm, describing the architects of American politics with such excellent epithets as “hypocritical, stupid, rude, nasty and stupid”.

The vice-president of the USA Joe Biden, the current curator of the US state policy (and earlier Saakashvili Georgia), was particularly impressed: “I think that the loud talker obsessed with politics on almost all foreign policy and national security issues over the past four decades ". After reviewing the analysis of Gates, it is possible to predict with confidence that in the USA the USA will also break wood. Unknown here just how much and what?

Analytical materials about how the European Union terribly puts pressure on Yanukovych are also amazing, even threaten with sanctions, impose mediation, and force compromises with neo-Nazis. And the European commissioners as boldly say: Ukraine is free in its choice ... of Europe!

Yes, Ukraine made a choice ... Putin at the last moment caught Ukraine with Yanukovych by the collar, falling into the precipice of default, and keeps, until ... Everyone somehow forgot about it all of a sudden. And what is her choice in this situation? God grant that Putin’s hand does not tremble. And the European Union came up with the threat to Russia, demands to stop the intervention! Putin doesn’t need to do anything in return, he will simply say: well, I’m already tired, I can’t hold Ukraine any longer, and I’ll open my hand - this will be an analyst!

How do you get it? It is very simple: will the credit line be closed due to the non-fulfillment of the Moscow agreements by Yanukovych, and wait, will the EU have time to catch Ukraine in free fall, without salaries and pensions, or will it not have time? Here it is not necessary to go to the “grandmother” - will not have time! Yes, he does not think about it, requires first to carry out reforms, and then they will develop a “Marshal plan” with the States. Of course ... In May, Euroskeptics promise to arrange the “French Spring” in parliamentary elections.

In general, the European Union with its European commissioners - Ashton, Barroso and others, is a separate song! This “eurocooker” is already in May - in three months! - will go to the election in the European Parliament. These are all “lame ducks”, and therefore, finally, these frostbitten ones: carry nonsense about the “European choice” and threaten with sanctions! They earn for themselves “golden parachutes”, but they are unlikely to get them, they will not forgive Vilnaus disgrace Washington!

What can we talk about with political "ducks"? When Ashton speaks in Kiev with Yanukovych, it may very well be that in reality she is already talking to Vladimir Vladimirovich. I would rather believe in the spirit of Putin than in the serious influence of Ashton and her company on Yanukovych. The American Embassy in Kiev is the second, after Russia, real player in Ukraine.

Polish Prime Minister Donald Tusk predicted that after the Olympics, Putin would increase pressure on Ukraine. Where else to strengthen when he already holds her by the collar? But, perhaps, Tusk is right exactly the opposite: the support of Ukraine for Russia may end after the Olympics, that is, the wisdom is wrong: whoever is having dinner with a girl, he dances with her. And Putin does not control Yanukovych, but opened a loan to him only to calmly hold the Olympics in Sochi. This is the worst scenario for Ukraine, and Yanukovych will then be rewarded in full according to his writings. Ukraine is only a pity ...