The most incredible piston motor 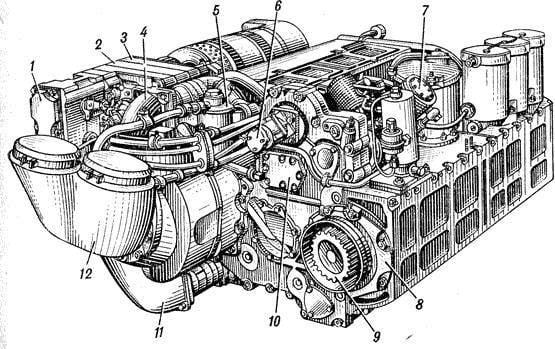 Suppose a son asks you: "Dad, what is the most amazing motor in the world"? What will you answer him? 1000-strong unit from Bugatti Veyron? Or the new AMG turbo engine? Or a dual supercharged Volkswagen engine?


Recently, a lot of cool inventions have appeared, and all these pressurized-injections seem surprising ... if you don’t know history. For the most amazing engine that I know of was made in the Soviet Union and, as you might guess, not for the Lada, but for tank T-64 It was called 5TDF, and here are some amazing facts.

He was a five-cylinder, which in itself is unusual. He had 10 pistons, ten connecting rods and two crankshafts. The pistons moved in cylinders in opposite directions: first towards each other, then back again, towards again, and so on. The power take-off was carried out from both crankshafts, so that it was convenient for the tank.

The engine worked on a two-stroke cycle, and the pistons played the role of spools, which opened the intake and exhaust ports: that is, it had no valves and camshafts. The design was brilliant and efficient - the two-stroke cycle provided maximum liter capacity, and direct-flow blowdown provided high quality cylinder filling.

Everything else 5TDF was a diesel engine with direct injection, where the fuel was fed into the space between the pistons shortly before the moment when they reached the closest approach. Moreover, the injection was carried out by four nozzles on a cunning trajectory to ensure instantaneous mixture formation.

But this is not enough. The engine had a turbocharger with a twist - the enormous dimensions of the turbine and compressor were placed on the shaft and had a mechanical connection with one of the crankshafts. Ingeniously - in the acceleration mode, the compressor was cranked up from the crankshaft, which excluded the turbojam, and when the exhaust gas flow properly rotated the turbine, its power was transferred to the crankshaft, increasing the efficiency of the engine (this turbine is called power).

On top of that, the engine was multi-fuel, that is, it could run on diesel fuel, kerosene, aviation fuel, gasoline, or any mixture of them.

Plus, there are about fifty unusual solutions, such as composite pistons with heat-resistant steel inserts and a dry sump lubrication system, like racing cars.

All the tricks had two goals: to make the engine as compact, economical and powerful as possible. For the tank, all three parameters are important: the first facilitates the layout, the second improves the autonomy, the third - maneuverability.

And the result was impressive: with a working volume of 13,6 liters in the most forced version, the engine developed more than 1000 HP. For the 60 diesel, this was a great result. In terms of specific liter and overall power, the motor exceeded analogues of other armies several times. I saw it live, and the layout is really amazing - the nickname “Suitcase” really suits him. I would even say "tightly packed suitcase."

He did not catch on due to excessive complexity and high cost of living. Against the background of 5TDF, any car engine - even from the Bugatti Veyron - seems somehow banal. And what the hell is not joking, the technician can make a revolution and again return to the solutions once used on the 5TDF: a two-stroke diesel cycle, power turbines, a multi-injector injection.

Began a massive return to the turbo engines, which at one time were considered too difficult for non-sports cars ...