Russian military gingerbread is not for all allies to taste 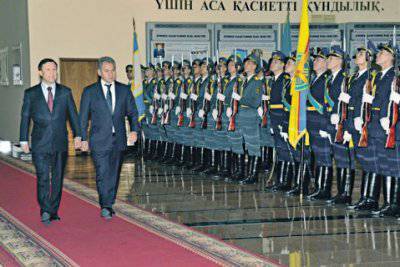 Russia may tighten policy towards its Central Asian allies in the CSTO. NG reported this to a military-diplomatic source in Moscow: “The withdrawal of US and NATO troops from Afghanistan is approaching, which means that the likelihood of instability exports to the Commonwealth territory is increasing. But our closest allies in collective defense admit border conflicts and do not fully strive to ensure security on the southern borders of the CIS. ” That is why, the source notes, in the coming days, Russian President Vladimir Putin, among other meetings with foreign leaders, plans to hold talks in Sochi with the presidents of Tajikistan and Kyrgyzstan, Emomali Rakhmon and Almazbek Atambayev.


The point, it seems, is not only in the conflict between these countries. The Russian Foreign Ministry and the Ministry of Defense are concerned that a number of important agreements in the field of military cooperation with some Central Asian countries have not yet entered into force. And the measures of the military leadership of the Russian Federation, aimed at strengthening the defense capability of the region, are to a certain extent being inhibited here all the time. For example, it was expected that during a recent visit to Tajikistan by First Deputy Prime Minister Igor Shuvalov, credentials will be exchanged to ratify the agreement between the two countries on the status of the 201 Russian base. What should testify to its entry into force. However, this did not happen, and in Dushanbe it was stated that the exchange of letters would occur after the ratification of all the “economic and migration agreements” of the Russian Federation and Tajikistan signed in 2012.

Moscow hopes that this misunderstanding will be eliminated during the upcoming meeting between Rahmon and Putin in Sochi. Although the question of the further use of the military infrastructure of Tajikistan by the Russian military is unlikely to be removed from the agenda. At present, complicated negotiations are continuing between Moscow and Dushanbe at the military-diplomatic level on the possibility of renting the Aini military airfield in Tajikistan, which the Russian Defense Ministry has already invested heavily in its development. This aspect is reflected in the agreement on the status of the 201st military base, and Rakhmon, as they say, will not get out of it. But the Tajik leadership is pushing for significant rents for Ayni. Meanwhile, Moscow has pledged to provide Dushanbe with free military assistance in the amount of $ 150-200 million. In addition, Tajik military specialists are trained on a preferential basis, and assistance is provided in conducting army maneuvers. But in Dushanbe, this seems to be taken for granted. Meanwhile, a military airfield close to the Tajik-Afghan border is very necessary for the Russian troops, and it is needed to protect Tajikistan. According to past experience, it was the military personnel of the former 201st Russian division who defended this border, and aviation cover was carried out from a civil airfield in Dushanbe.

Air cover in the Central Asian region today is provided by the Russian Air Force base in the Kyrgyz Kant. But it is far from a possible zone of struggle against illegal armed groups (including, probably, with the Taliban).

Although the combat power of "Kant" was already last year, according to information from the commander of the Second Air Force and Air Defense Command Viktor Sevostyanov, it was doubled. But, as the Minister of Defense of the Russian Federation Sergey Shoigu said the other day, the plans of the Ministry of Defense include further building up the combat potential of the base. According to the press service of the Central Military District, in the near future, a link of modernized Su-25CM attack aircraft will arrive in Kant. At the same time, Russia begins to implement large-scale military assistance to Kyrgyzstan. This assistance is estimated at billion dollars. This is quite a lot for Kyrgyzstan, but the republic’s leadership seems to be trying to sit on two chairs.

Kyrgyz President Atambayev, having achieved the withdrawal from Manas of the US military base, still leaves a large-scale foreign aviation presence in the country, including the US (as well as their allies). Experts express concerns about the possibility of their military intelligence. And this, of course, is not necessary for Russia. Apparently, in a conversation with his Kyrgyz counterpart, Vladimir Putin will address this problem. Russia is investing too much in strengthening the security of the region so that its interests are not taken into account.

At first glance, unlike Kyrgyzstan and Tajikistan, the military relations of Russia with Kazakhstan are no problem. In December last year, the countries signed an agreement on military-technical cooperation, providing for active mutually beneficial military-economic contacts. The next step is the implementation of the agreement on the creation of a unified regional air defense system of the two countries. But this document has not been ratified by Kazakhstan. The other day, Sergei Shoigu, at a meeting with his Kazakh counterpart Adilbek Dzhaksybekov, announced the gratuitous delivery of five C-300 anti-aircraft missile systems (ZRS) divisions to Kazakhstan.

But even then there were problems. According to Azattyk radio, in Kazakhstan they started talking about the fact that these complexes are not new and need to be repaired. If we recall, similar discontent was expressed in due time by the President of Belarus, Alexander Lukashenko, when in 2007 – 2008 Russia gave the C-300 four divisions to the brotherly country for free. “The air defense complexes were presented, and the money for their restoration and maintenance would still have to be paid,” Lukashenka was outraged then. But I still forked, paid ... Of course, Kazakhstan will also have to fork out to modernize used Russian complexes. But still it is beneficial for the defense of the state. For example, five C-300 divisions, which the Russian Federation intended to supply to Iran under the contract, cost 800 million dollars. Modernization will be much cheaper, especially under an agreement on military-technical cooperation, it will be carried out at domestic prices, and training of Kazakhstani specialists will carried out free of charge.

Ctrl Enter
Noticed oshЫbku Highlight text and press. Ctrl + Enter
We are
Prospects, subtleties and difficulties of the formation of the SCO PRO, or when the observers are closer to the participantsCSTO summit in Sochi: around Syria, claims of Sargsyan and the southern borders
Military Reviewin Yandex News
Military Reviewin Google News
65 comments
Information
Dear reader, to leave comments on the publication, you must sign in.