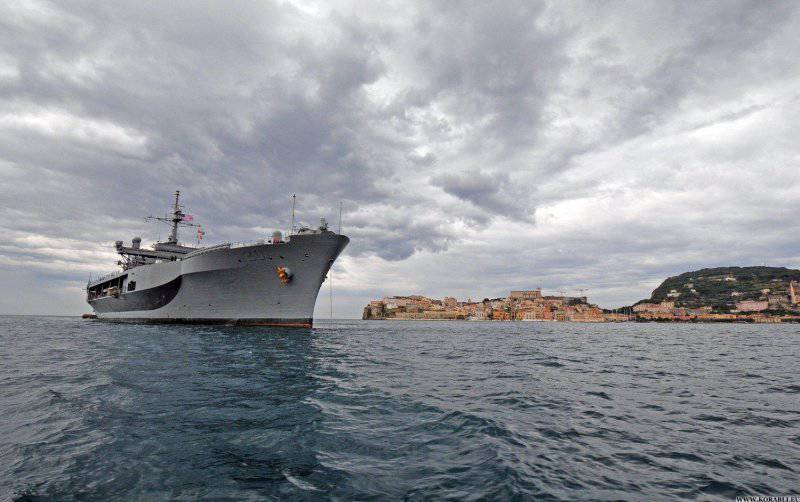 The glittering fire of the Olympiad is attracting more and more attention. This time, in the light of the torches, the masts and superstructures of unfamiliar ships began to shine. We were visited by the US Navy!

On February 5, the Navy press service confirmed information about the entry of American ships into the Black Sea. The sixth command ship was the first to sail through the Bosporus and Dardanelles fleet Mount Whitney. In the afternoon, the US Navy Taylor missile frigate joined him.

The ships of the Sixth Fleet are expected to keep watch in neutral waters off the coast of Greater Sochi until the end of February. But no more than three weeks from the moment of their entry into the Black Sea. These are the rules of stay for all warships of non-Black Sea states. Calls to the territorial waters of Russia are not planned. The official purpose of the visit is to provide security during the Sochi-2014 Games.

Unofficial purpose of the visit? No one will tell about it.

The Black Sea has a special status of the “inner sea”. Therefore, the Black Sea cruises of ships under the stars and stripes always cause a sharp reaction in Russian society, which considers such “visits” as a threat to their own security and an attempt to invade the sphere of Russia's original interests.

This time, the Americans have several reasons for a visit to the Black Sea.

Ensuring the safety of the US Olympic team is an important and responsible task. But how can a destroyer (carrier of Tomahawks and long-range anti-aircraft missiles) help prevent the terrorist attacks that the Pentagon fears?

Euromaidan. Demonstration of solidarity of the Ukrainian opposition. That is how one can regard the possible appearance of the US Navy off the coast of Ukraine.

Finally, we must not forget about their intended purpose. Each warship is a clot of radio electronics designed to illuminate the air, surface and underwater conditions, as well as conducting reconnaissance in a wide range of the electromagnetic spectrum.

The reasons may be many. Yankee ships are on the way.

Who came to our shores this time?

Alas, the Yankees are not going to demonstrate anything surprising. No amphibious stealth ships of the type "San Antonio", UDC, pyramid-like "Zamvoltov", high-speed LCS and other super-modern technology. The composition of the Black Sea group of the US Navy was extremely simple and dull.

One of the oldest operational ships of the US Navy, built at the beginning of the 1970-s, at the same time being the flagship of the Sixth Fleet and the only ship permanently listed (Sixth Fleet, like the rest of the US Navy, means only the area of ​​responsibility updated on a rotational basis). 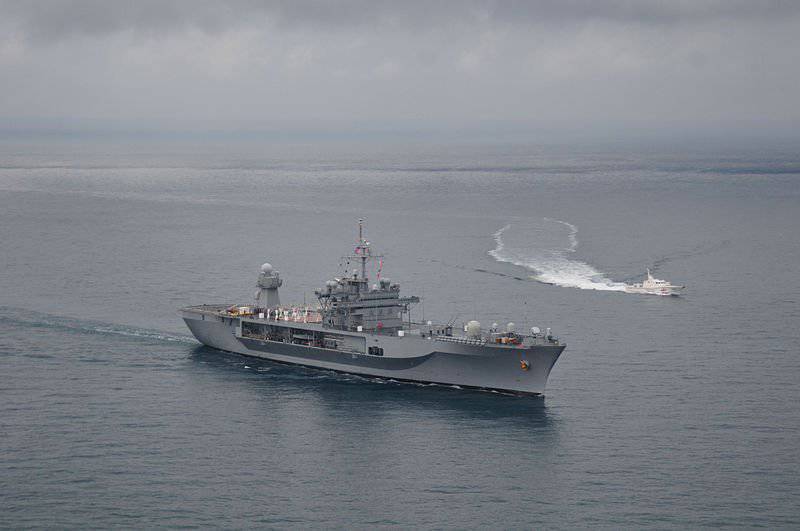 "Mount Whitney" accompanied by a coast guard boat of Georgia. Visit to Batumi, November 2013
The staff ship is devoid of any attack and defensive weapons, with the exception of X-NUMX-caliber Browning and a pair of Phalanx anti-aircraft guns.

18400 tons full displacement. Full move 23 node. The permanent crew is 325 people, of whom 155 are civilian civilian people. The maximum passenger capacity of a staff ship, including its crew, is 930 people.

"Mount Whitney" was created as a floating command center, necessary to manage and coordinate the actions of the Navy and the Marine Corps. Externally, it can be taken for a research vessel or a spacecraft control ship: the 190-meter flat deck, dotted with white shrouds of antenna devices.

The unusual appearance of the ship is dictated by the requirement of ensuring the electromagnetic compatibility of a large number of receiving and transmitting equipment — dozens of communication channels and the exchange of data necessary for effective control of the course of military operations at sea, on land and in the air.

Inside the ship "Mount Whitney" there are a large number of premises for briefings and meetings, a printing house, numerous cabins for the guests of the ship, including luxury "admiral" apartments, PCF, machine rooms and control posts. For delivery on board of important persons and other administrative tasks there is a helicopter SH-60 "SiHouk."

To date, the ship "Mount Whitney" has completely lost its original meaning, becoming a messenger and representative ship used to display the flag. The capabilities of modern microelectronics and communication systems make it possible to control troops directly from the aircraft (E-8 J-STARS) or from an underground bunker on the territory of the Navy Gaeta (Italy). A specialized ship is not required. For the organization of the flagship command post enough computing power, detection tools and capabilities of the CID of any Ajis cruiser or destroyer.

"Mount Whitney" is a frequent guest in the Black Sea - largely due to the constant presence in the Sixth Fleet (port of registry - Gaeta). He became the first American ship that delivered humanitarian aid to Poti during the war in South Ossetia. 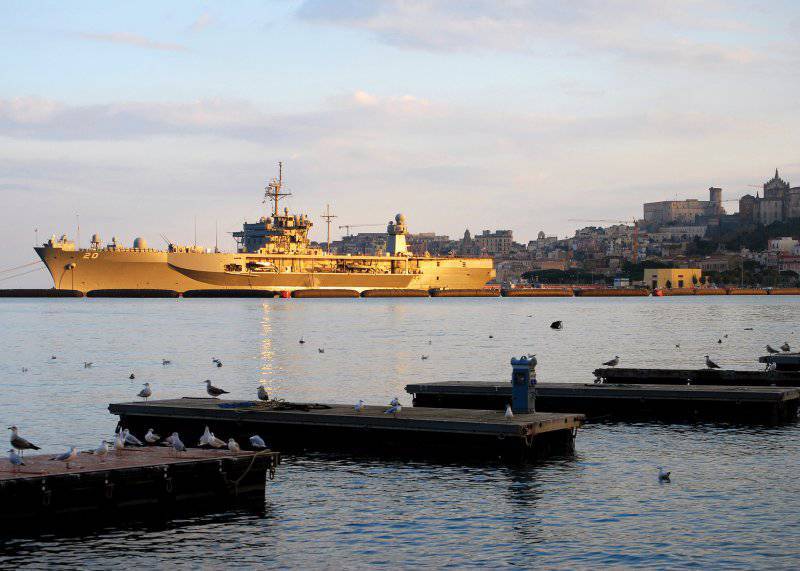 "Mount Whitney" while parking in the port of Gaeta
The Yankees appreciate the ship for its impressive size, low cost of operation and a peace-loving appearance - without the formidable rockets and protruding gun barrels. However, this did not help “Mount Whitney” at all during the attempt to call at Sevastopol (November 2008): American sailors were forced to leave the port under the pressure of anti-NATO speeches conducted by the Russian-speaking population.

A low-speed “cabut bomber” cannot pose a serious military threat. However, Mount Whitney is saturated with a large number of electronic intelligence tools - and it should be kept away from its native shores.

Another thing is curious: how can it help the US Olympic team? The answer is obvious - no way.

Frigate URO (with guided missile weapons) type "Oliver Hazard Perry" - an ancient artifact, a relic of the Cold War, to date only nominally listed as a combat unit.

Forty years ago, the ambitious frigate Perry project called for the construction of fifty light multipurpose ships to defend transoceanic convoys in the event of World War III in a nuclear-free format (Russian Tanks rush to the English Channel, the Yankees are bringing help through the Atlantic Ocean). The main features of the new ship were to be simplicity, cheapness and limited combat characteristics - only the most necessary, nothing more.

As it turned out later, the Yankees overly “limited” the capabilities of the frigate. As a result, Oliver H. Perry became a physical and mental disabled person - without a normal radar, sonar, closed air defense system, anti-submarine missiles and long-range anti-aircraft missiles. With a low speed, single-shaft power plant and disgusting seaworthiness. 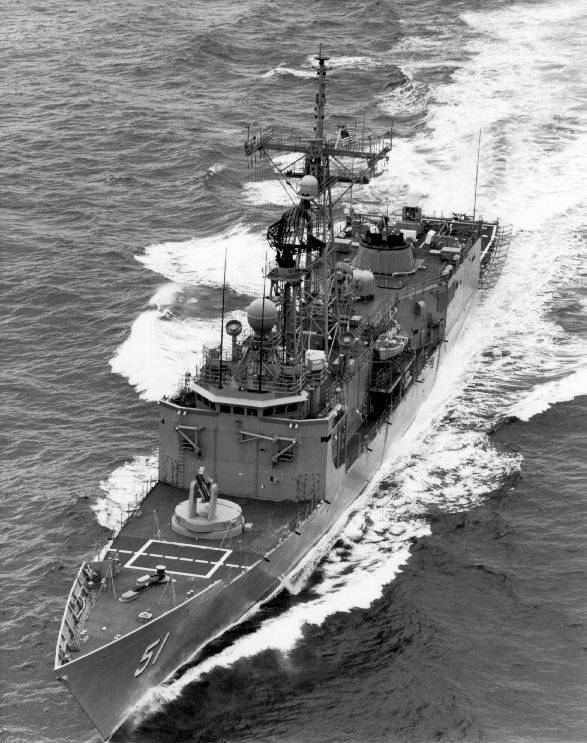 Frigate type "Oliver H. Perry"
As a result - each meeting with the enemy turned into a disaster.

The Stark frigate could not repel the attack of a single Iraqi Mirage and almost died, having lost the crew of its crew to 37. The frigate Samuel B. Roberts hit a contact mine of the 1908 model of the year. Disgrace.

However, throwing tomatoes at American engineers is not worth it. All the other frigates of the same age as Perry were even worse.

On the positive side: “Perry” was distinguished by a reliable and efficient gas-turbine GEM, unified with the GEM of all existing cruisers and destroyers of the US Navy. He had a tremendous range for its size. It was equipped with "advanced" means of detection (compared to frigates built in other countries) and had two helicopters on board! The single-stage power plant was partially compensated by two sliding screw columns. 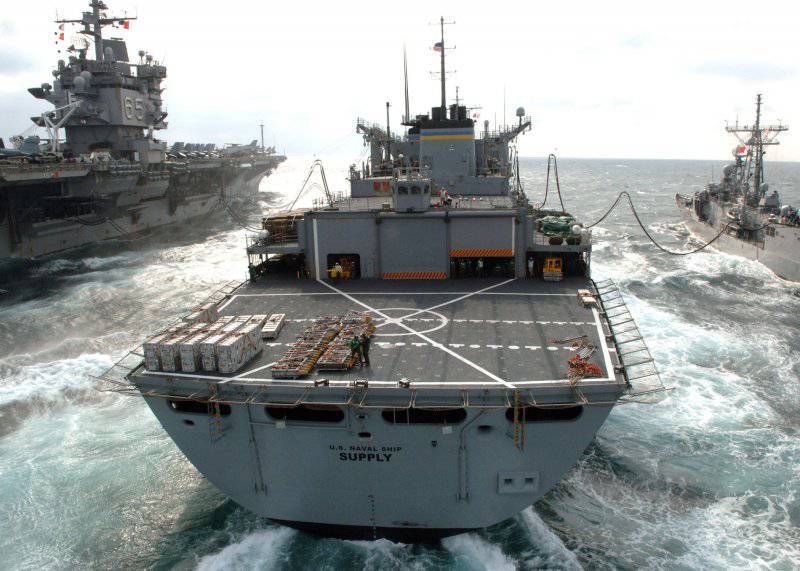 The aircraft carrier Enterprise and the frigate Taylor simultaneously refuel from the integrated supply ship
It was to some extent a masterpiece - useless, as a fighting unit, but very beautiful from a technical point of view. Narrow, graceful, swift. Stuffed with modern electronics and weapons: the Yankees were able to place a maximum of mechanisms and systems in a small case with a displacement of ≈ 4000 tons.

Total managed to build 71 frigate (53 - US Navy, the rest - licensed copies for the allied fleets). To date, the Americans have almost completely withdrawn them from the fleet, giving the ships to their not very rich allies (Poland, Egypt, Turkey, Pakistan, etc.), but with the condition of their further modernization with the purchase of American systems and technologies. 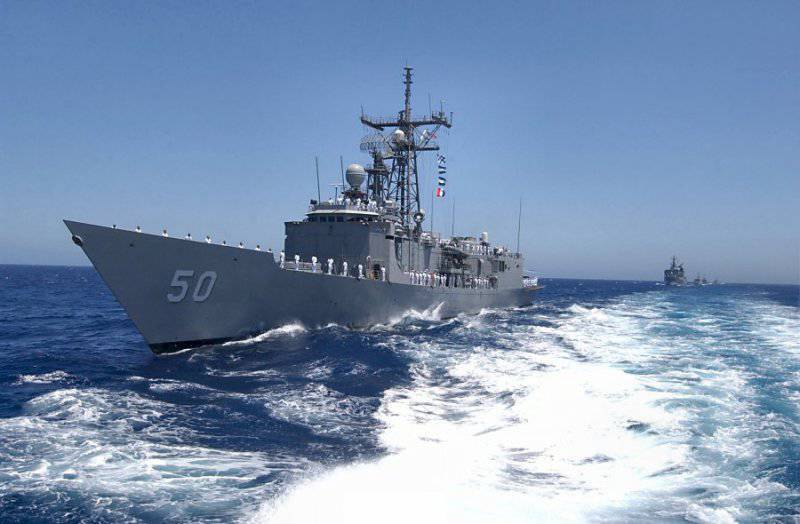 The remaining 15 units (including Taylor) underwent intensive therapy, as a result of which the American frigates lost the only Mk.13 launcher for launching anti-aircraft missiles and the Harpoon anti-ship missiles. The calculation was based on the fact that the anti-aircraft missiles of the Standerd-1 family are completely outdated and are useless in modern conditions. As for the loss of anti-ship missiles, the sailors will somehow be able to survive this loss.

To date, only the 76 mm caliber gun, the Phalanx six-barreled anti-aircraft gun and two helicopters have been preserved in the Perry armament. Missile weapons on board American frigates are completely absent.

This is a good option for fighting the Somali pirates with the feluccas. But to consider the "Taylor" and similar ships as serious combat units is clearly not worth it.

And most importantly - how can this “stub” help to ensure the safety of the Games in Sochi? 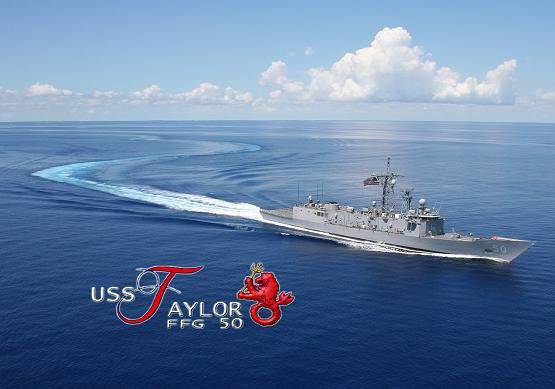 USS Taylor (FFG-50). The length of the ship is 138 m, full displacement - more than 4000 tons. 29 speed nodes. Range 5000 miles on 18 bonds. Staff crew 226 people, including 21 officer.
“Taylor” is famous for the fact that in the 2010 year, a Russian Tu-95 bomber flew above it on a low level flight, scaring Americans to death. Other feats and momentous events for the entire 30-year-old history this ship was not marked.

When considering the performance of the American group, it becomes obvious that both ships of the Black Sea Squadron are not able to provide any real assistance in terms of ensuring the safety of American athletes and fans. In addition, all American concerns about the Olympiad in Russia (“rescue” ships and airplanes, search for escape routes and evacuation points) resemble a relic of the Cold War and Russophobic jokes about bears on Moscow streets. And the "evacuation plans" themselves look terribly pitiful and absurd. If the Yankees were seriously preparing to rescue someone, they would drive a transport dock of the San Antonio type to the coast or, good, an Airborne helicopter carrier.

But not a toothless staff ship and an outdated frigate, which pretends to be a combat unit only for importance.

Ctrl Enter
Noticed oshЫbku Highlight text and press. Ctrl + Enter
We are
Squadron for exportThe sixth US fleet could not break through to the coast of Syria
Military Reviewin Yandex News
Military Reviewin Google News
146 comments
Information
Dear reader, to leave comments on the publication, you must sign in.