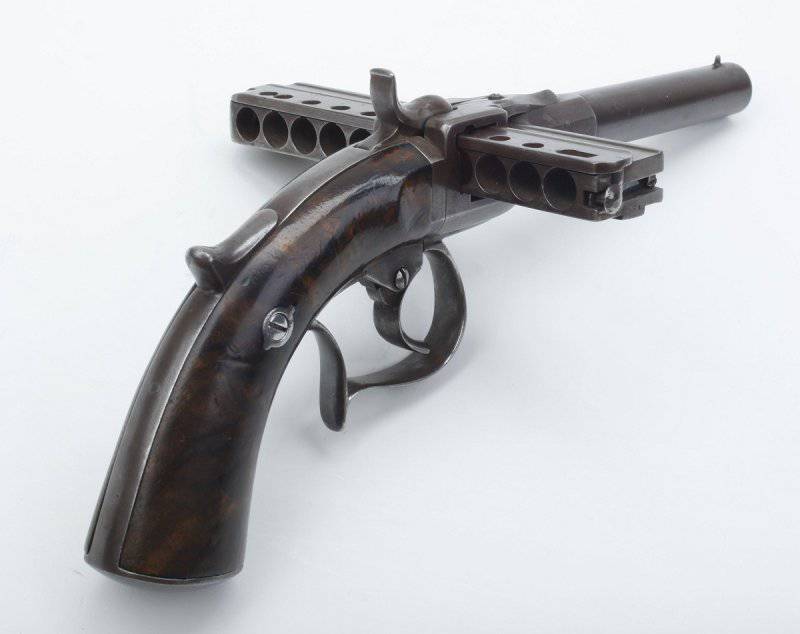 At the end of the 19 century, roughly between 1859 and 1862 for years, the French inventor Jarre (AE Jarre) received several patents for weapon very unusual design. A US patent was registered in the 1873 year. The studs used at this time, in connection with the studs protruding from the sleeves, created difficulties for their centering with respect to the striking part of the trigger in the multiple-charge weapon. Jarre decided to make a horizontal block of the chamber, in which the cartridges were located. In fact, it turned out to be a drum deployed in a horizontal line. 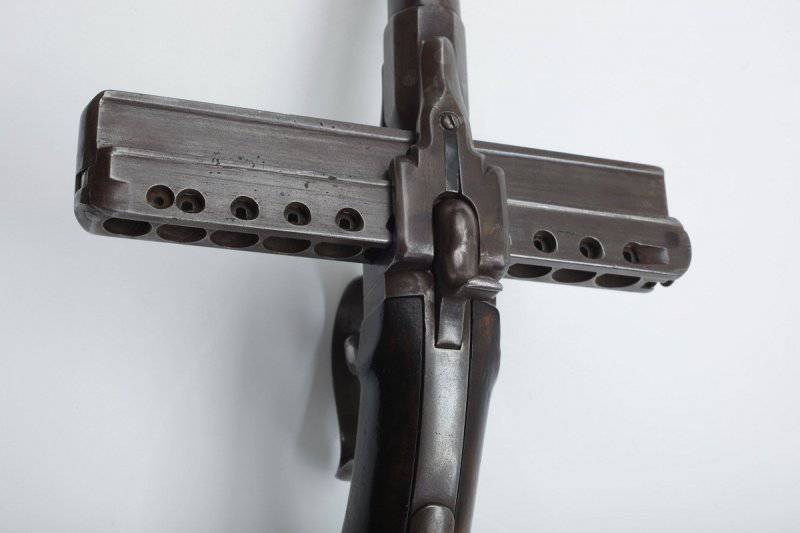 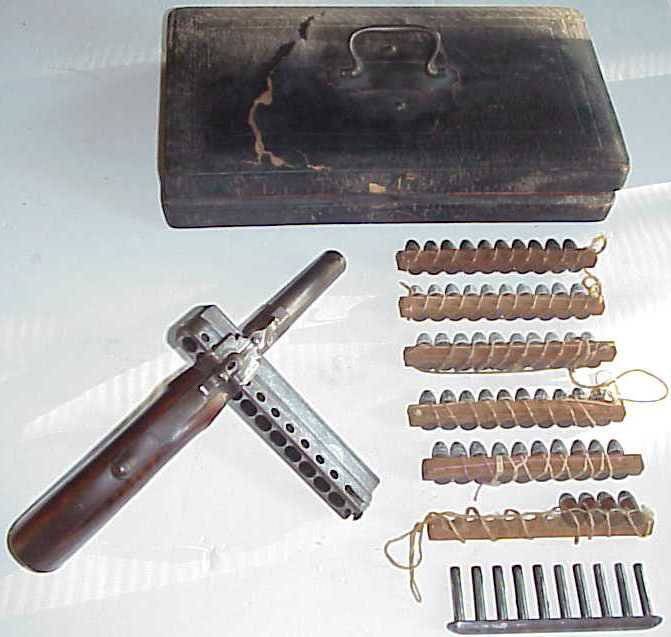 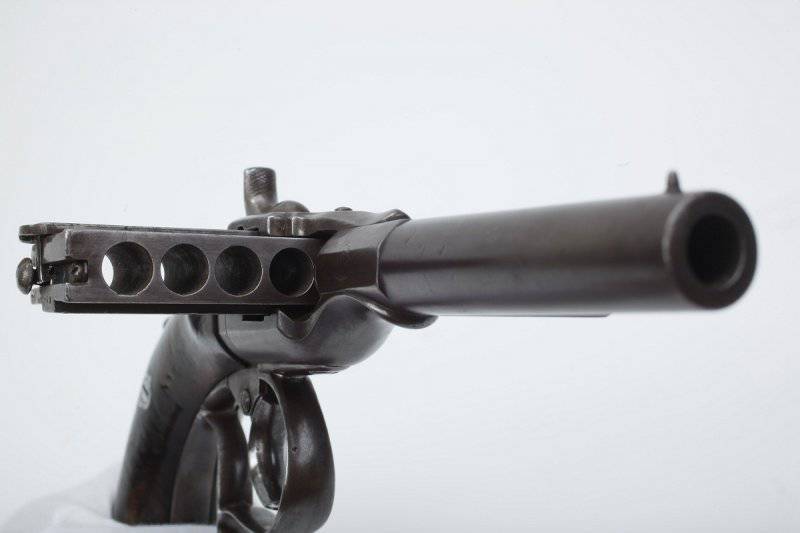 Trigger mechanism pistol double action. During the next cocking of the trigger, the feeder moves the cartridge block from left to right, substituting a new cartridge for firing. The pistol can shoot both with a pre-cocked trigger and a self-cocked one.

There were two main types of pistols Harmonica. 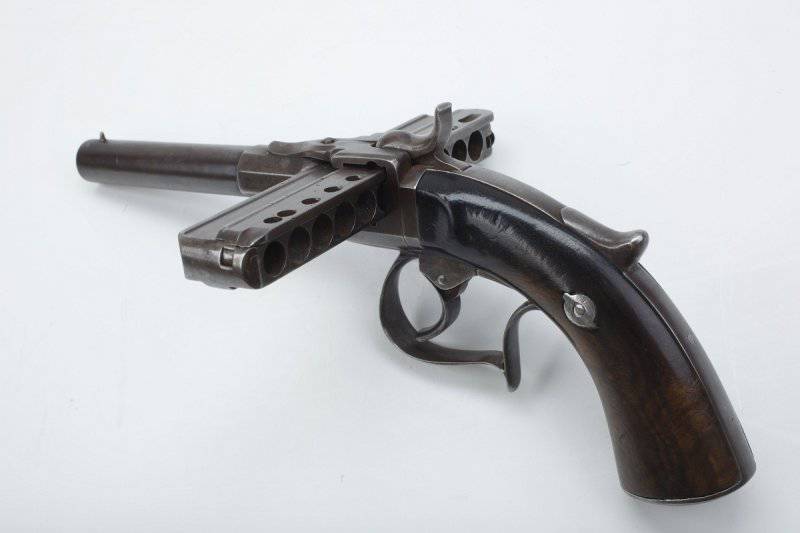 In the first model, the magazine (horizontal chamber block) moved in the horizontal plane relative to the pistol frame and one fixed barrel. The barrel of a round section, octahedral at the base, is rigidly fixed in the frame. In the upper part of the trunk there was a front sight in the form of a vertical stand, sometimes ending in a ball. Frame with trigger guard. The wooden handle cheeks are attached to the handle with screws. 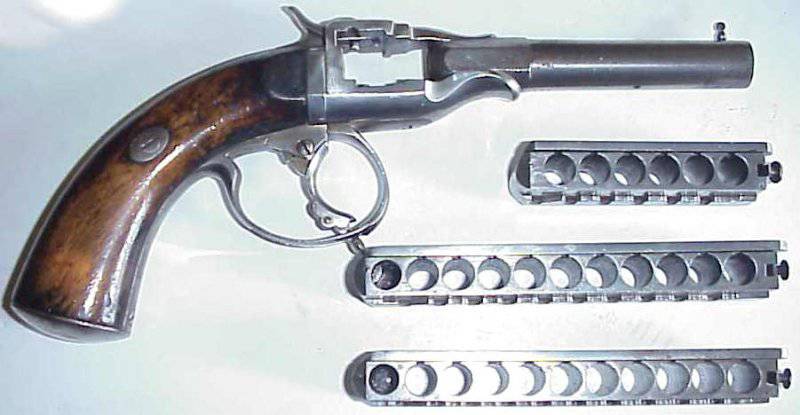 Between the barrel and the breech frame in a special figured groove there was a block of chambers. Chambers blocks were made for six, eight and ten charges. 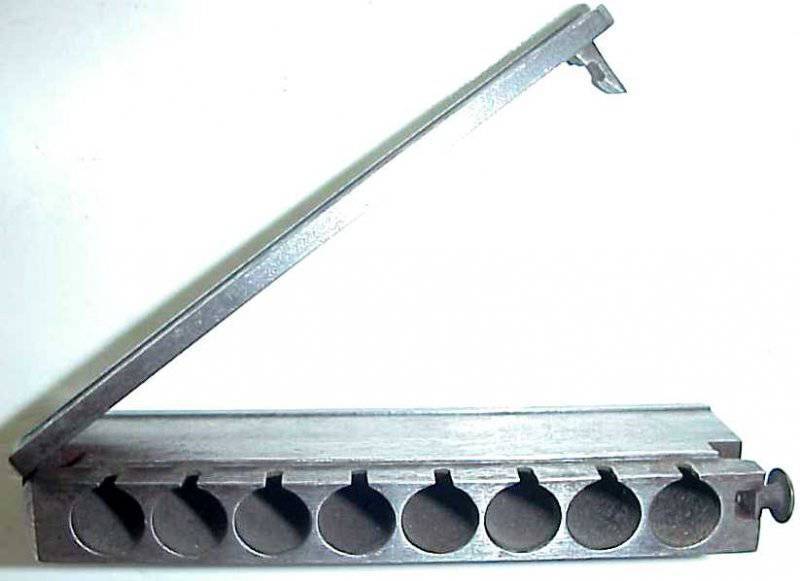 The upper, centering studs of the cartridges, the lid of the block of the chamber chambers of the pistols of this model was opened on a hinge fixed to the left. On the right was the cover latch. 9 caliber mm, used stiletto ammunition. The length of the gun barrel 114,3 mm.

The marking of the gun is the factory numbers, made on the frame and block of the chamber, sometimes on the upper part of the barrel the text “JARRE A PARIS” was put 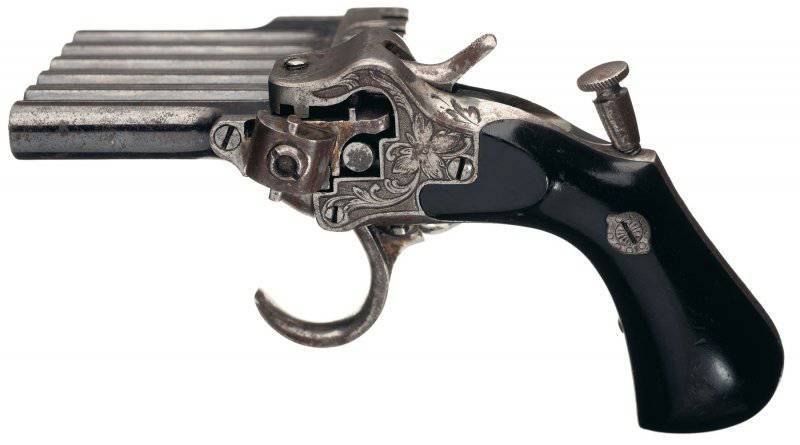 In the second model, the barrels were combined with the chamber and represented a single unit that moved relative to the frame of the gun. The frame of the gun is short, the side frame covers are fastened with screws. The cheeks are made of wood or ebonite.

Channels trunks barrel unit rifled. Between the channels of the trunks on the surface of the barrel unit there are grooves. 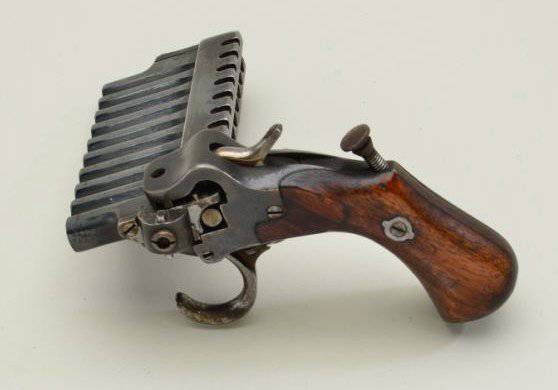 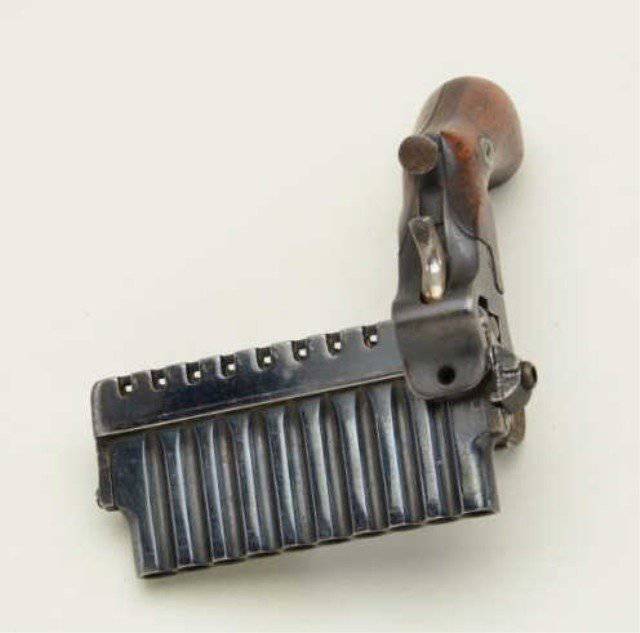 The length of the barrel stem unit 54 mm. 7 caliber mm, used hairpins. The trigger needle is curved, the trigger guard is missing. 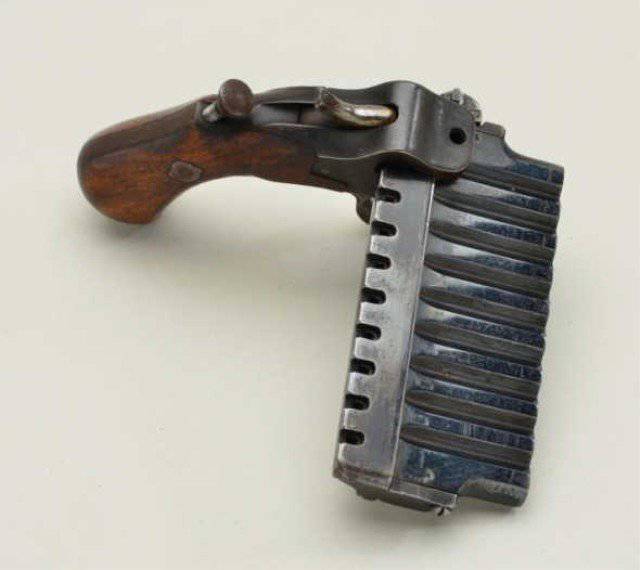 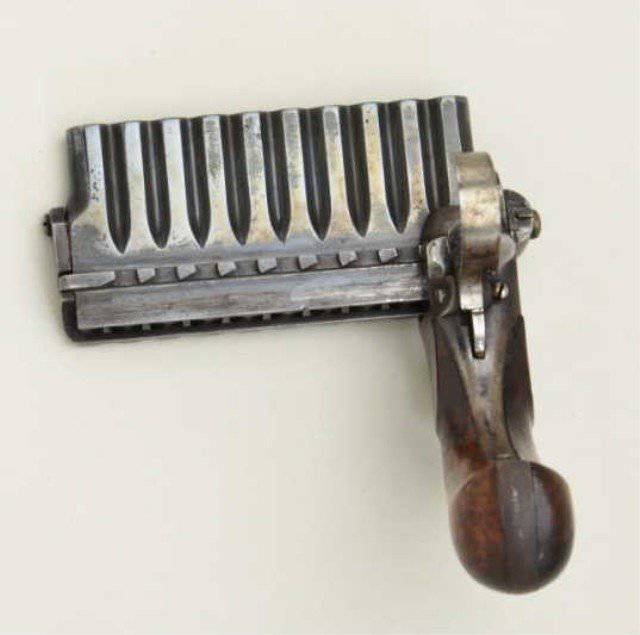 In the upper part of the frame was installed a rod that serves as an aiming device. Factory numbers were applied to the frame and the receiver unit. 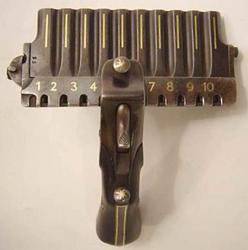 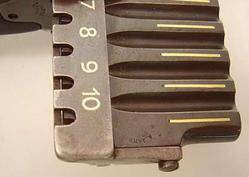 At the top of the chamber, there may be a digital text indicating the serial number of the chamber. Barrel blocks could be six and ten charging. 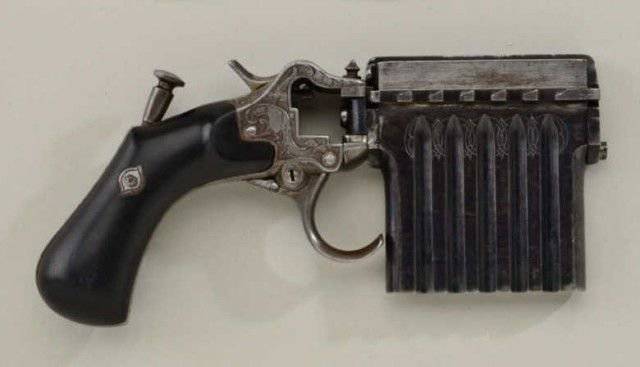 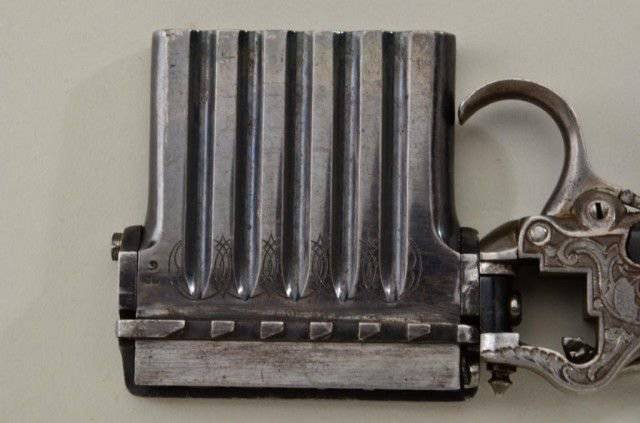 This weapon was more compact, especially when storing the barrel unit separately from the frame. In this case, the capital unit with a special protrusion was fixed in the frame of the pistol. 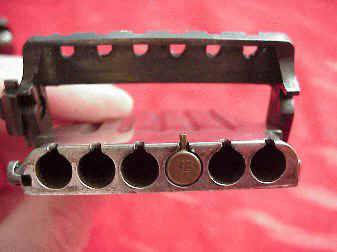 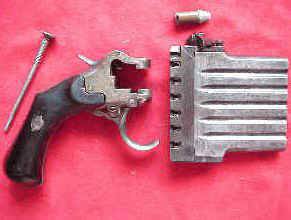 The Harmonica Pistol did not gain popularity for many reasons. First, soon the hairpin cartridges gave way to the cartridges of the ring and central ignition. Secondly, a horizontally moving barrel unit or a chamber block disrupted the alignment of the weapon, thereby affecting the accuracy of shooting. The horizontal location of the store significantly increased the dimensions of the weapon, in contrast to revolvers or pistols of a different design. 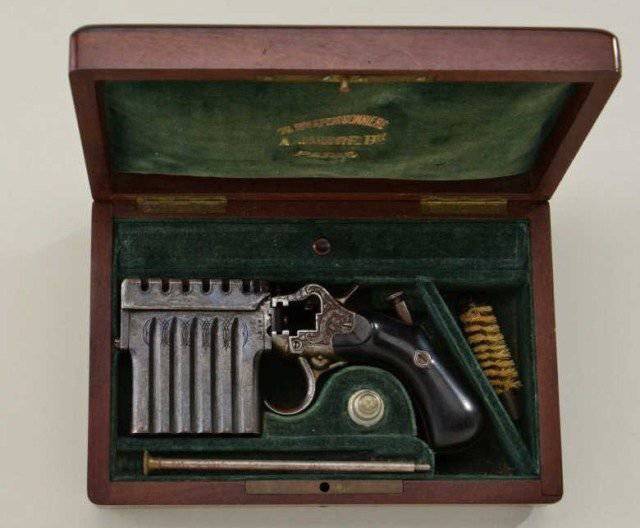 This is what led to the fact that at present, Harmonica Pistol Jarre is a rare and expensive weapon. Models are rare, for example, with a block of chamber for 8 charges or pistols in the original case and with native accessories, at a price higher than 10 thousand dollars.