Thee Week publication and further development of the US nuclear forces

February 6 2014
16
Currently in the so-called. nuclear club includes seven states. Presence of nuclear weapons even two countries are the subject of numerous disputes. Despite such proliferation of nuclear weapons, the majority of disputes in this area concern only a few states. Numerous discussions of hypothetical nuclear conflicts between Russia and the United States, China and the United States, as well as between North Korea and its neighbors in the region, are ongoing. At the same time, the most active discussion concerns precisely the Russian and American nuclear arsenals. Such a kind of “echo” of the Cold War can still influence both the relations of countries and their strategy. 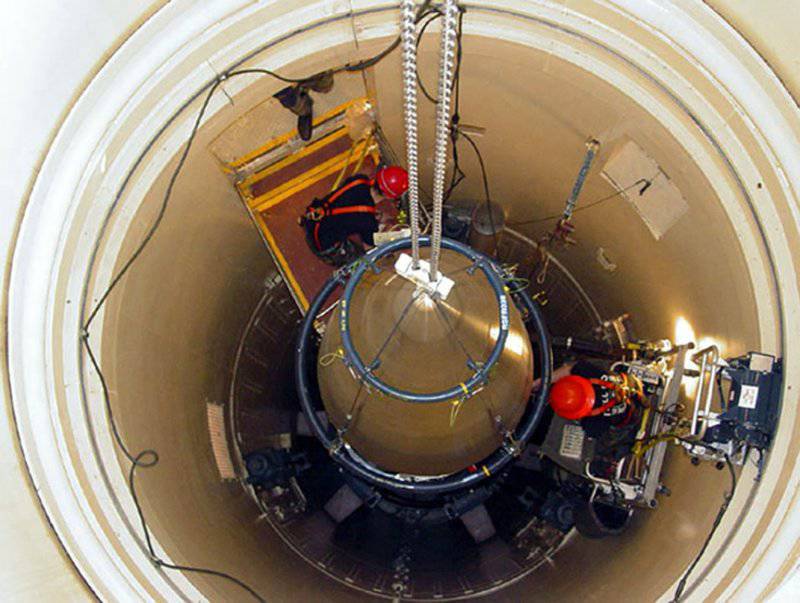 In January of this year, the American edition of The Week published an interesting material under the intriguing title Why? (“Why are all US nuclear missiles aimed at Russia?”), The author of which tried to determine the current state and prospects of the US strategic nuclear forces (SNF).

First of all, the American press noted the specific limitations with which the use of intercontinental ballistic missiles is connected. It is noted that the location of the US missile bases, which have about 450 ballistic missiles, could be one of the reasons for the full-scale conflict. So, if the US gets ready to strike at any targets in East Asia or the Middle East, then the shortest flight route of the missiles will pass over the territory of Russia. Thus, a similar attack of targets on the territory of third countries can provoke a blow from the Russian side. This fact can explain the bold and intriguing title of the article.

This feature of attacking targets in Asia means that the emerging threats from the new nuclear powers can no longer be confronted with the help of the existing strategy. Since the use of intercontinental missiles against Asian countries is associated with certain risks, according to the author of The Week, it is necessary to change the structure and strategy of the use of strategic nuclear forces. It is required to increase the flexibility and speed of response without reducing the combat potential and ability to deter potential adversaries.

To attack anywhere in the world without the risk of drawing third countries into a nuclear war, submarines and strategic bombers should be used. Such a technique can launch a rocket in the most convenient area. A similar strategy for the development and use of strategic nuclear forces, in which their priority is given aviation and the marine component, will provide not only flexibility in use, but also greater survivability of delivery vehicles and nuclear munitions.

In favor of the submarines also argues regarding their secretive movement. A strategic underwater bomber can literally get lost in the ocean because of what its detection and destruction becomes an extremely difficult task for the enemy. In this case, however, the submarine, having received the appropriate order, can at any time launch rockets and destroy the targets indicated to it.

The author of the publication “Why are all American nuclear missiles aimed at Russia?” Also notes an important drawback of mine-based ballistic missiles: they need to be launched within a few minutes after receipt of information about the launch of enemy missiles. This leaves very little time for detecting false alarms and can be disastrous. The order for submarines or aircraft, in turn, can be canceled for a longer time compared with ballistic missiles.

Having carried out such a small “analysis”, the journalist of The Week raises the question of the expediency of preserving a large number of intercontinental silo-based rockets. It is noted that at present only Russia has a nuclear arsenal, the size of which allows an effective missile attack on the bases of the American strategic nuclear forces. However, after the end of the Cold War, such a development seems extremely unlikely, since the United States and Russia simply have no reason to attack each other.

At present, there is a widespread opinion among American supporters of intercontinental missiles that the United States should have a significant advantage over other countries in the number of nuclear weapons. Only in this way, it is claimed, can stability be ensured in the international arena and warn third countries against building up their strategic nuclear forces. However, in contrast to this view, the author of the material Why? offers to get acquainted with the facts and draw the necessary conclusions.

There are more than 4600 delivery vehicles and nearly two thousand warheads in the United States nuclear arsenals. Russian strategic nuclear forces have a slightly smaller number of nuclear warheads and delivery systems. The third largest nuclear power - China - has no more than 300 nuclear warheads. This means that even after the fulfillment of the conditions of the existing START-3 agreement, the Russian and American arsenals will be several times larger than the Chinese. In other words, even against the background of reductions now underway, China will need years to achieve parity with the leading nuclear powers.

Thus, the author of the article “Why all American nuclear missiles are aimed at Russia?” Sums up, the argument about maintaining numerous arsenals as a method of deterring potential adversaries cannot justify the need to save a large number of mine-based intercontinental rockets. In addition, we should not forget the already mentioned submarines and strategic bombers, which, in a number of parameters, are ahead of the silo-based missiles.

In general, the publication of The Week looks like another attempt to rethink the role, functions and appearance of the US strategic nuclear forces. Such arguments began to appear shortly after the end of the Cold War, and since then with enviable regularity fall on the pages of newspapers, magazines and Internet sites. The Pentagon, in turn, has its own views on the development of nuclear arsenals, which may not coincide with the opinions of various analysts.

It is worth noting that some articles similar to the publication “Why are all American nuclear missiles aimed at Russia?” May be a manifestation of hidden games in the US military. The existing economic problems of the United States forced to reduce military spending, including the development of advanced weapons and military equipment. From this point of view, praise addressed to submarines and bombers while simultaneously searching for the shortcomings and problems of mine-based missiles can be similar to an attempt to eliminate competitors in the fight for budgets.

One way or another, The Week’s material is unlikely to have any influence on the further development of US strategic nuclear forces. The Pentagon intends to continue the operation of all existing means of delivery, as well as to develop several projects of new bombers, submarines, etc.